If you already know this, skip down to the teardown.

FYI - This one's all about the App Store. In a future article, we'll do just the same for Google Play, so stay tuned.

At its core, Apple's App Store algorithm has one goal, and that's to find the most relevant apps and games to respond to every search query a user can make. To do that, it looks in three specific places:

It reads all of the words in those three pieces of text and extracts what your app is all about. In pro-speak, this process is called "indexing".

If you want to learn more about how to use keywords properly, check out the following in-depth guides:

We'll begin our teardown by looking at a category of apps that's seen a very turbulent last few months. 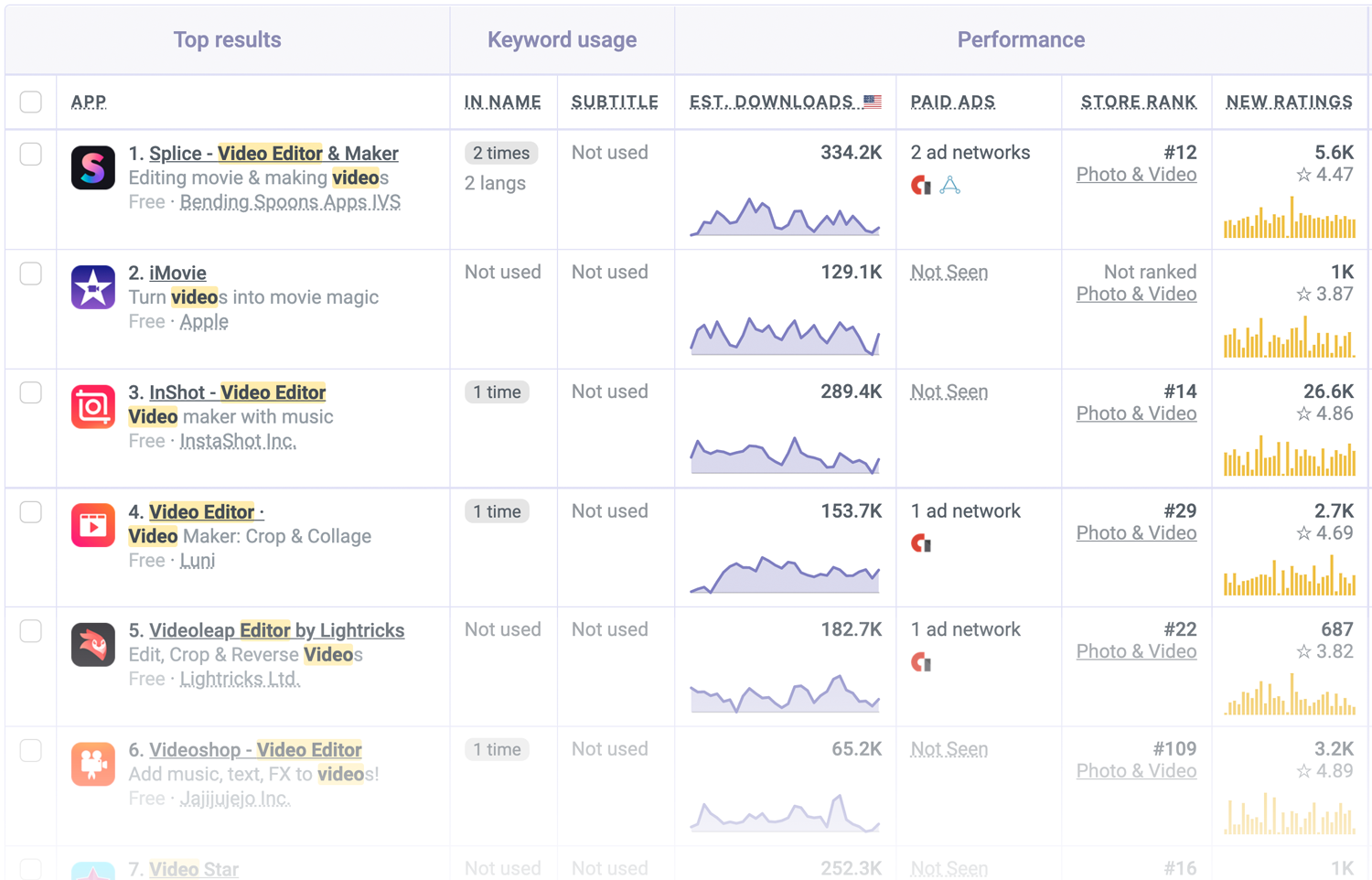 At first glance, I see a list that's almost sorted by downloads, and even though an Apple-owned app is in the results, it isn't the first result. That you don't see every day!

Much like last week's teardown, the order of these comes down to keyword placement and ratings.

At #1, Splice (which I did a full app teardown of a few months ago) uses the keyword in its name and subtitle and has very competitive downloads and ratings. I looked through the top 10 results, and none are competitive enough, which is why it's the #1 result.

In second is Apple's iMovie, which I'm going to skip for obvious reasons!

On to third, and this one might require a double-take. Keyword in the name, check. Lots of downloads, check. Lots of ratings, check. So why isn't it the lead? See that keyword duplication in the subtitle? That's no good... The algorithm keeps the last instance, which gives the entire search term less priority.

Luni's attempt to guzzle up every bit of algorithm juice it can, by having nothing else in the name, fails for the exact same reason (hint: easy fix!), and Videoleap shoots itself in the foot by splitting the term between the name and subtitle, all on its own.

Overall, it's pretty clear what the "move" is here, and that's to not duplicate parts of your search term. I have a feeling I'll be repeating that a few more times in this teardown.

FYI - The one name you don't see in the top 5 is Capcut, the free video editor from TikTok, which has more downloads and a competitive number of ratings, and uses the search term correctly. While it has all of those, there's one thing it doesn't, and that's age. Although age has little impact on ranks, when it comes down to very competitive terms where apps have fairly similar performance, a big difference in how old an app is can make a big difference in rank. In this case, it sent Capcut to #14.

What can Capcut do? Work on getting more ratings. They surely have the downloads for that.

It's not too long ago when emoji keyboards were all the rage. But even now, when the iPhone's built-in keyboard supports emojis fairly well, this search is pretty popular. 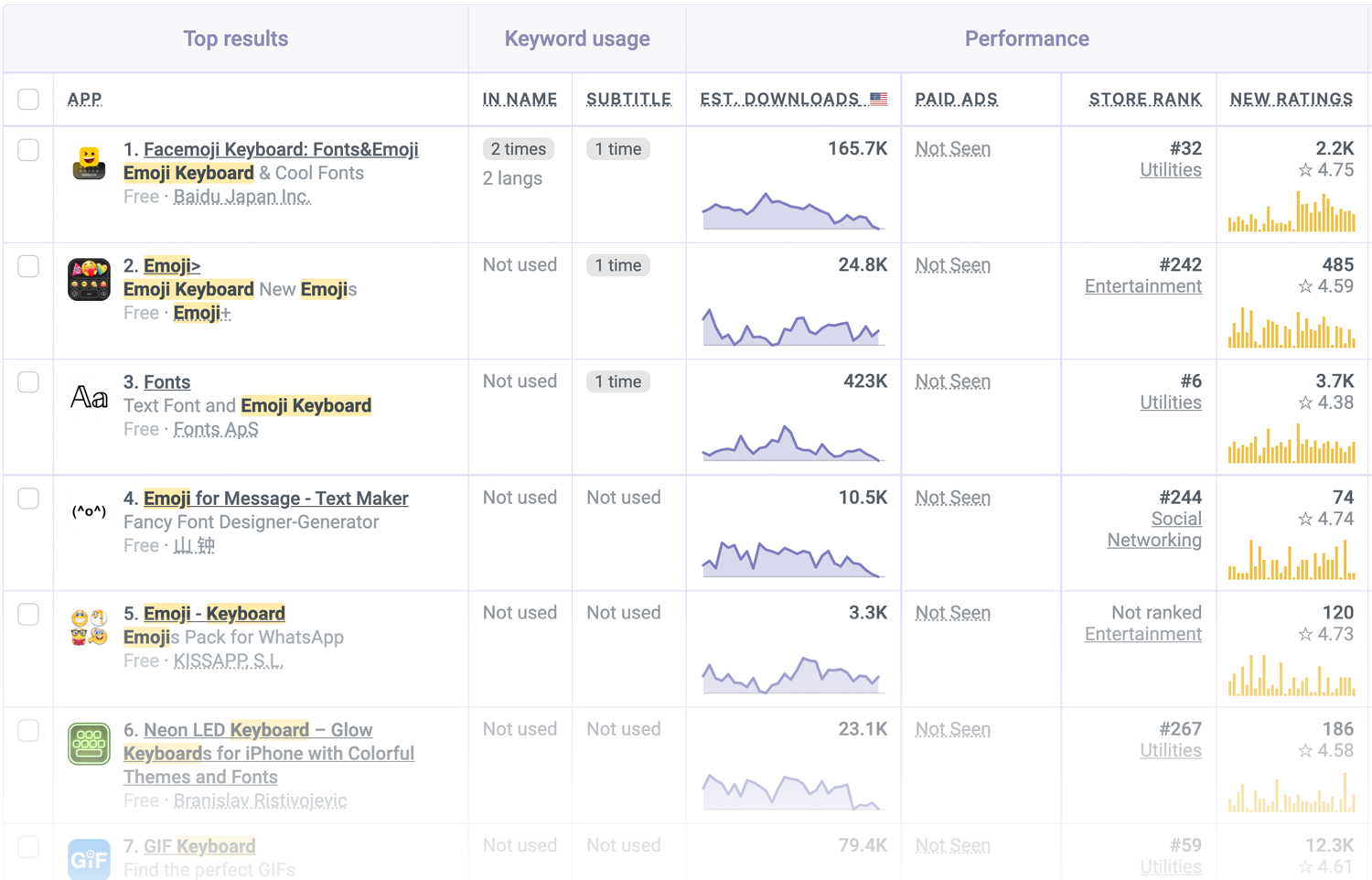 At first glance, I can already tell this is going to be an interesting one because Apple handles the & symbol weird...

Starting at the top, Facemoji managed to cram emoji and keyboard into its name and subtitle twice! Did they have to in order to rank #1? Absolutely not. But.. the app has quite a few new ratings and downloads, between those and having the term in its name, the algorithm has no other option.

Actually, wait! Duplication means the algorithm sees the last instance of the words and not the first, so technically it only has the search term in its subtitle. As we go down the list, you'll see all other apps do as well, which is why Facemoji is still the #1 result. Also, it has the term as the first keyworword of its subtitle. That helps.

The second place here also kind of makes sense. It's using the keywords correctly and has a decent amount of downloads and ratings. Not as many new ratings as the #1, which is why it's sitting pretty at #2.

So far, so good, things still make sense. And as we dip into #4, they continue to do that. Emoji for Message only has a part of the search term visible, and I'm pretty sure the other half is tucked in its keyword list, making it the weaker of the bunch. Downloads and ratings are also not very competitive, so it can only go as high as #4.

At #5 is where we need to do some more thinking. The app has the full search term as its name. It doesn't have a lot of downloads, but we've seen before that enough ratings will make up for that, but it doesn't have too many of those either, so it's not too competitive.

But it has the full search term as its name, which in the past I've suggested will works wonders, so ?!?!?!?!?!

Well... It suffers from the cardinal sin of duplication. See that emoji in the subtitle? By including it there, the app actually loses the weight that just having it in the name earned. Without that weight and without competitive performance, it's very hard for the algorithm to reason having it any higher.

If I'm KissApp, S.L., my first order of business is rewriting that subtitle.

Music learning apps have become extremely popular over the last few years, even before we started working from home. Guitar and piano are both pretty popular instruments, but piano is a bit more competitive, so let's have a look at that. 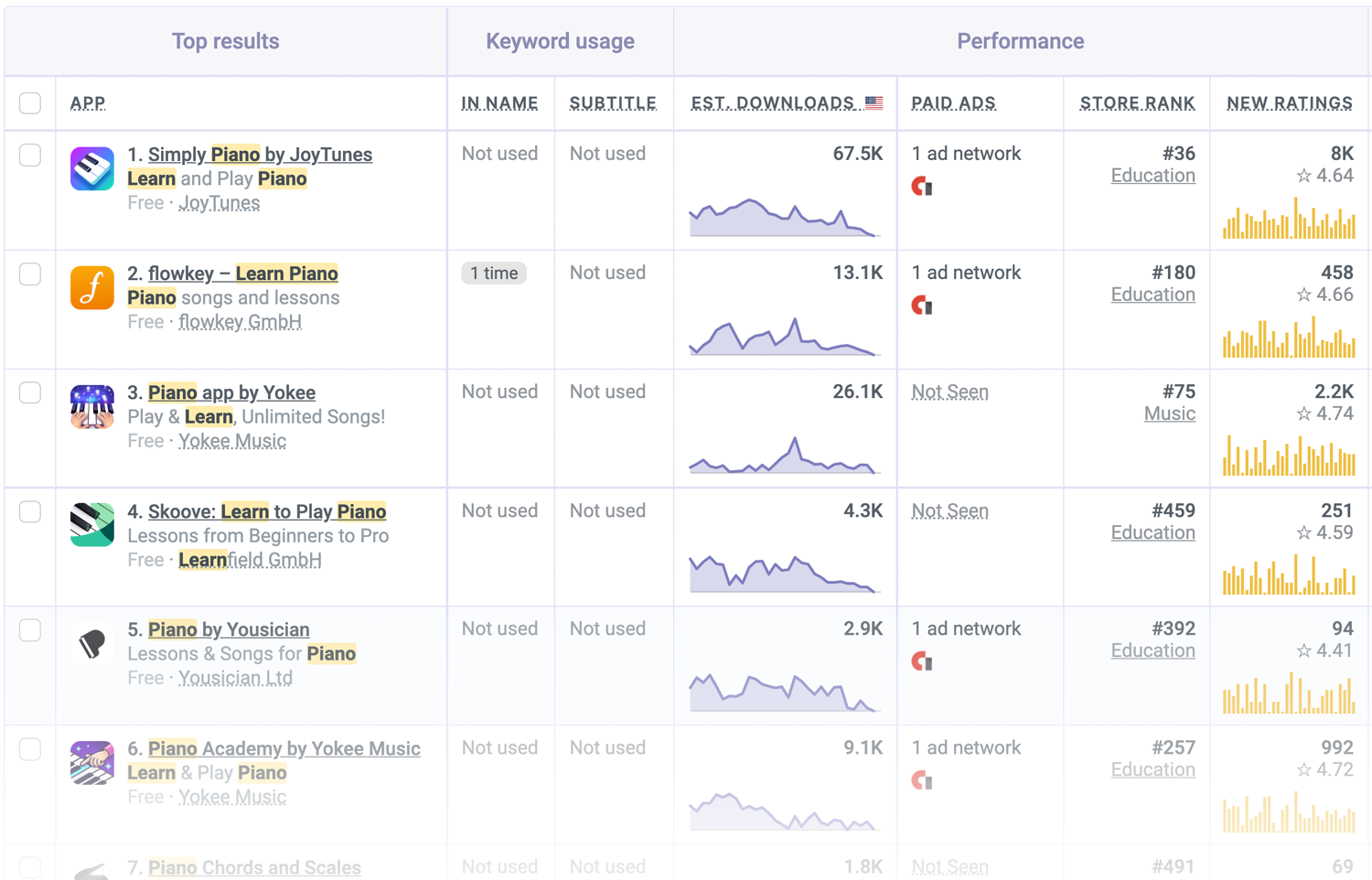 At first glance, I can see this is a pretty competitive keyword and that ratings play a pretty big role here.

Starting with the leader, Simply Piano, who has most of the ratings and downloads. But... it also has this keyword in its name and subtitle. Splitting your main search term between the name and subtitle isn't ideal, but the sheer number of new ratings really bridges that gap.

We can see why when we look at #2, flowkey, which has both words in its name and yet still ranks second. That's because it barely gets any new ratings, and the algorithm is very sensitive to that. It's an order of magnitude away, but if it was closers, having the full search term in the name would have given it the upper hand, even without having more downloads.

Need more convincing that the name is stronger than the subtitle? Sitting at #3 is Yokee, which has twice as many downloads as flowkey and five times the ratings. What it doesn't have, however, is learn piano in its name. It, like Simply Piano, splits it between the name and the subtitle, and that loses it a lot of force.

If Yokee rephrased its app's name to "Learn piano by Yokee" they'd jump to second place fairly easily. Also, app is ignored by Apple's algorithm, so it's not doing much already.

Skoove in 4th and Yousician in 5th follow a fairly similar pattern—First, it's the app that has the full search term in its name, and only then comes the one that has it split.