FYI - This one's all about the App Store. In a future article, we'll do just the same for Google Play, so stay tuned.

At its core, Apple's App Store algorithm has one goal, and that's to find the most relevant apps and games to respond to every search query a user can make. To do that, it looks in three specific places:

It reads all of the words in those three pieces of text and extracts what your app is all about. In pro-speak, this process is called "indexing".

If you want to learn more about how to use keywords properly, check out the following in-depth guides:

We'll get this teardown started by looking at a keyword I didn't expect to be that popular but is—Whiteboard. I'm not too surprised though. I find myself wanting to draw examples in many of the virtual meetings I do these days. 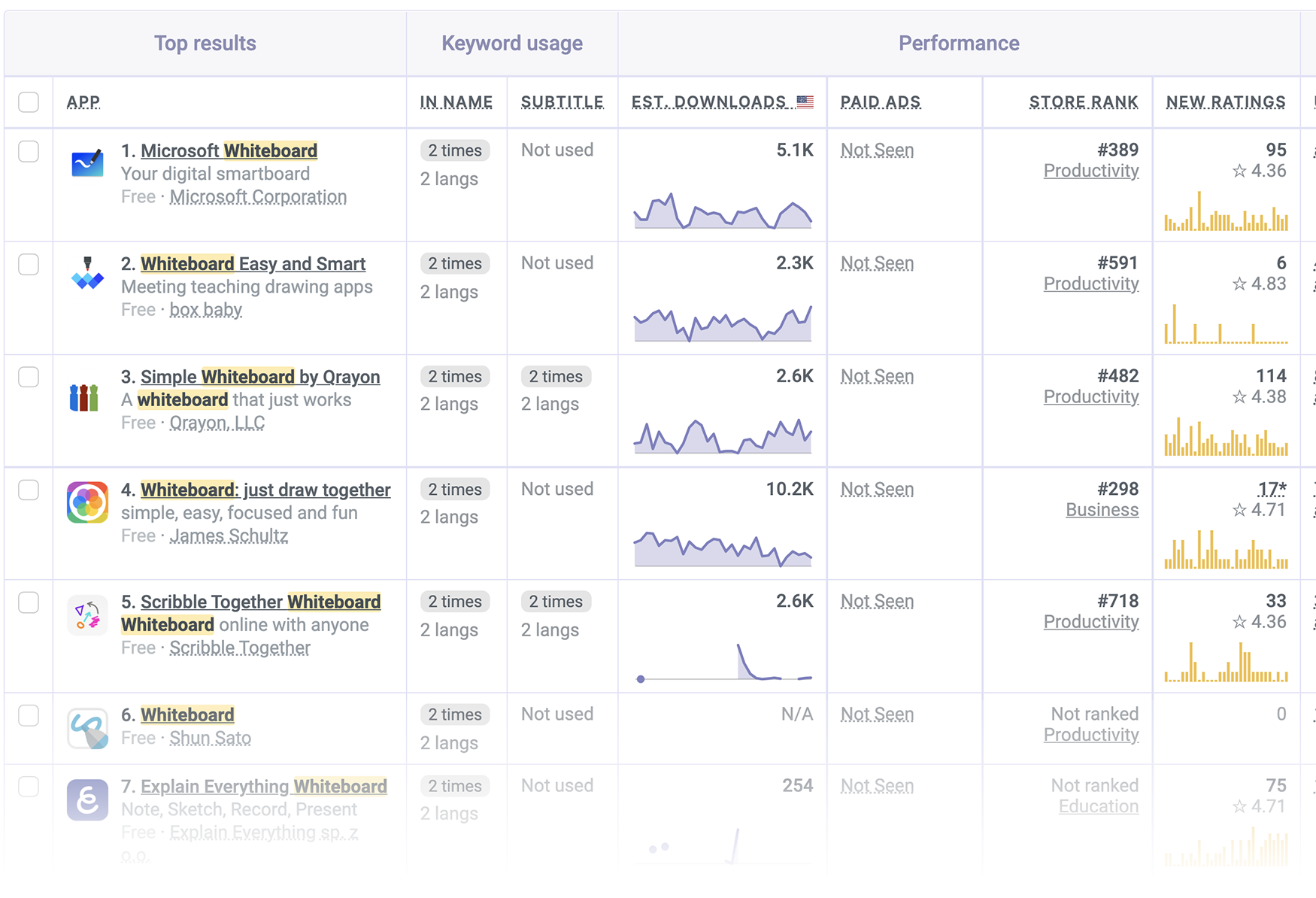 At first glance, I see results that are almost sorted by downloads, but it's not just downloads but rather keyword placement and weight.

Microsoft leads the pack here with a healthy amount of downloads, about twice those of the rest of the top 5 (except for #4), it's also getting a healthy number of ratings for this group. The total is pretty low, but the entire segment looks like that, so it works.

Its secret weapon, however, isn't downloads but rather keyword weight. The app's name is very short, just two words. That indicates to the algorithm that this app is all about those two keywords.

Need more convincing that keyword placement is important? The 3rd result gets more downloads and ratings than #2, but look where #3 has the keyword: in the middle of its subtitle, where #2 has it as the first work in its name.

And if you haven't read the previous teardowns, the reason I said #3 has it in its subtitle even though it also has it in its name is because the algorithm skips duplicates.

#4 is peculiar because it has more downloads than the rest and doesn't commit any duplication sins, so we'd expect it to be higher. A couple of things could cause this: 1. this is the youngest app of the bunch. Age isn't a critically strong signal but does have an impact. 2. The way the algorithm handles the : has been a bit weird lately. I don't have enough evidence to support any suggestion here, but I know something's iffy.

At #5 we have another bad use of duplication and an overly long name/subtitle, which together devalue the keyword even more.

Note: It seems like Apple's algorithm has become much more sensitive to keyword placement and density lately. I'm not entirely sure when that started, but if you've gone through previous Teardowns, you know it's a pretty consistent pattern.

Next up is a much more competitive keyword both by score and by the sheer number of results. Between storms, fires, and other natural disasters, it's no surprise its popularity is so high. 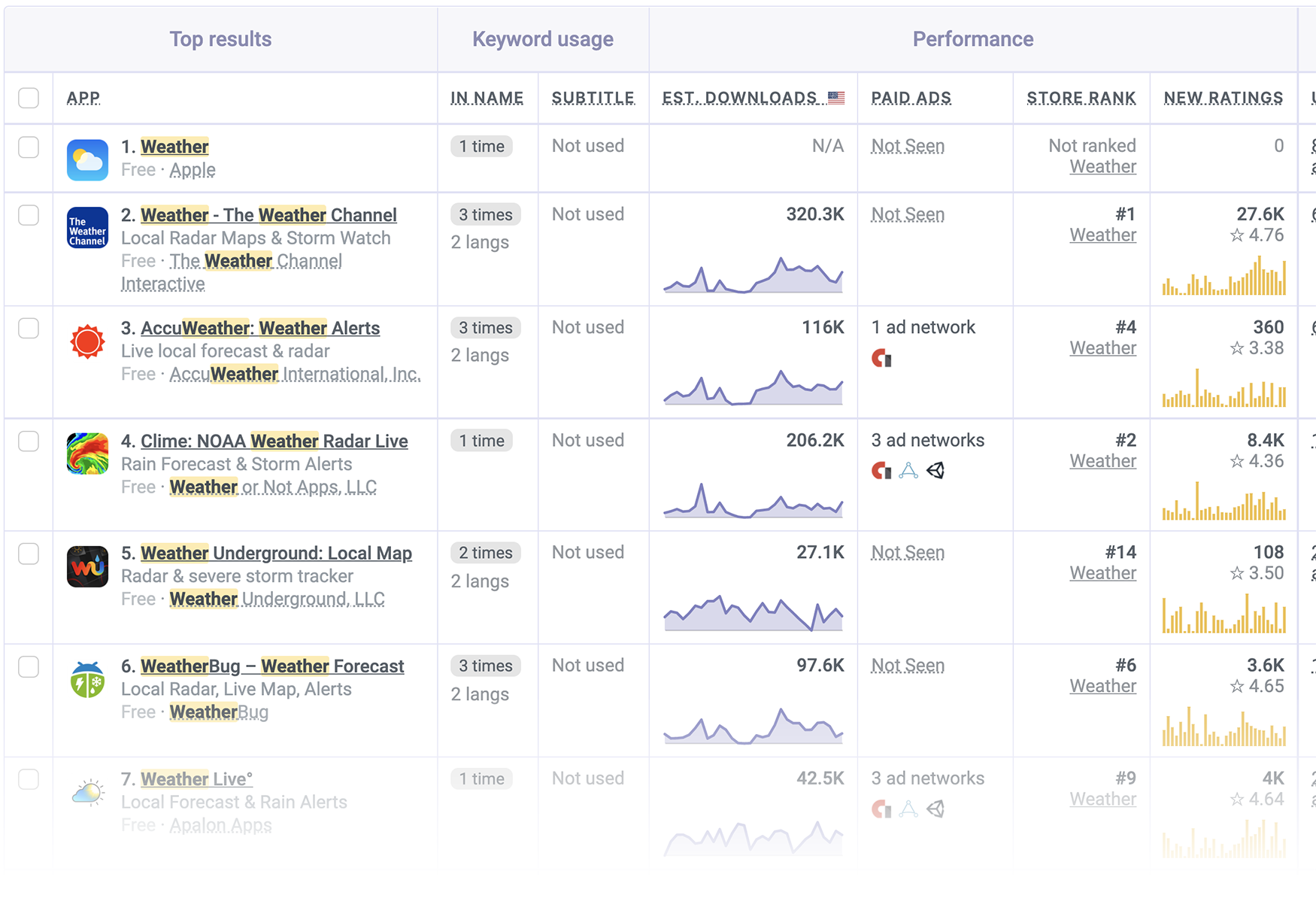 At first glance, I'm coming into this category expecting weirdness. Apple's own app sits at the top and its data source second, which means competing here is not going to be easy. I've analyzed The Weather Channel before and can tell it's doing a great job at ASO.

I'm going to skip Apple's app for obvious reasons and skip right to #2, which has the most downloads and ratings of the top 5 apps and also has the keyword in the name. Twice, but that's probably a calculated move since the app's name includes the keyword.

With the way the algorithm is now, I suspect removing the duplication won't hurt ranks. If it ain't broke...

#3 and #4 could look confusing if you skip a tiny detail. Like the last keyword, we have a pair where the one on top has fewer keywords and ratings. Accuweather does do a better job with keyword density, but what helps it beyond that is its age. Again, it's not a critical factor, but it can be helpful.

And lastly, in #5 we have Weather Underground, which has the fewest downloads and ratings and is almost the youngest. It does do a good job with its name, but with such a high competitiveness and popularity scores, and so many search results, it needs more ratings to start inching up.

Last for this teardown is a game, which we skipped in the last teardown. 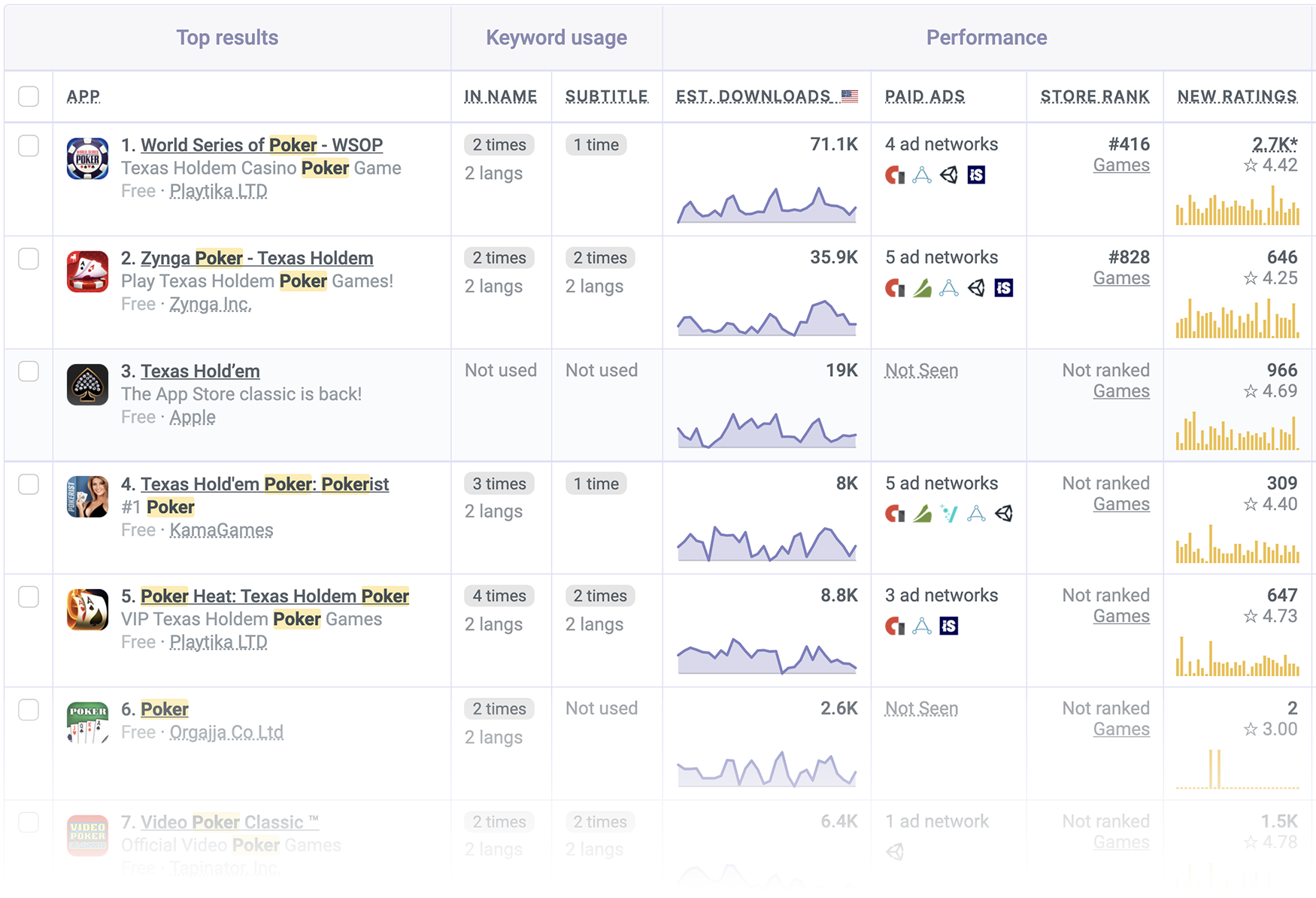 At first glance, I see results that, again, are almost sorted by downloads. But not exactly. Can you guess what's going to tip the scales?

Right behind it is Zynga Poker, which also duplicates the term and devalues it... At roughly half the downloads, a small change to the game's name could easily pop it above. If anyone from Zynga is reading, this is a really easy win.

#3, Texas Hold'em is a peculiar one. No mention of keyword in the name + it's competitive enough that just having it in the keyword list wouldn't be enough. Ohhhh, it's made by Apple. I can't say I knew Apple had a Poker game in the store, but it's there so, skip!

Much like previous keywords we've analyzed, the #4 and #5 spots reminder us why keyword density is critical. #5, Poker Heat has more downloads and ratings than the app above it, but its name and subtitle are both longer, and (for some reason) it repeats its keyword three times... #4 is a bit more conservative with its repetition as it is with the length of its name and subtitle, which puts more weight on the keyword and give it the better rank.

If it's not abundantly clear already, keyword placement and keyword density are amazingly important for ASO, and it's true for both apps and games.

Placement - The more important a keyword is, the closer to the beginning of the app's name (or subtitle) it should be. The name gets more weight than the subtitle, so very important words should (only) go in the name.

Duplication - Keyword repetition is ignored, and the algorithm ignores all instances of the keyword except for the last one. Combine this with the tip above, and you should have your strategy.

Density - The more words you have in your name and subtitle, the less each is worth. How many words to include is a not-so-easy balancing act between keyword coverage (which you want more of) and keyword focus.