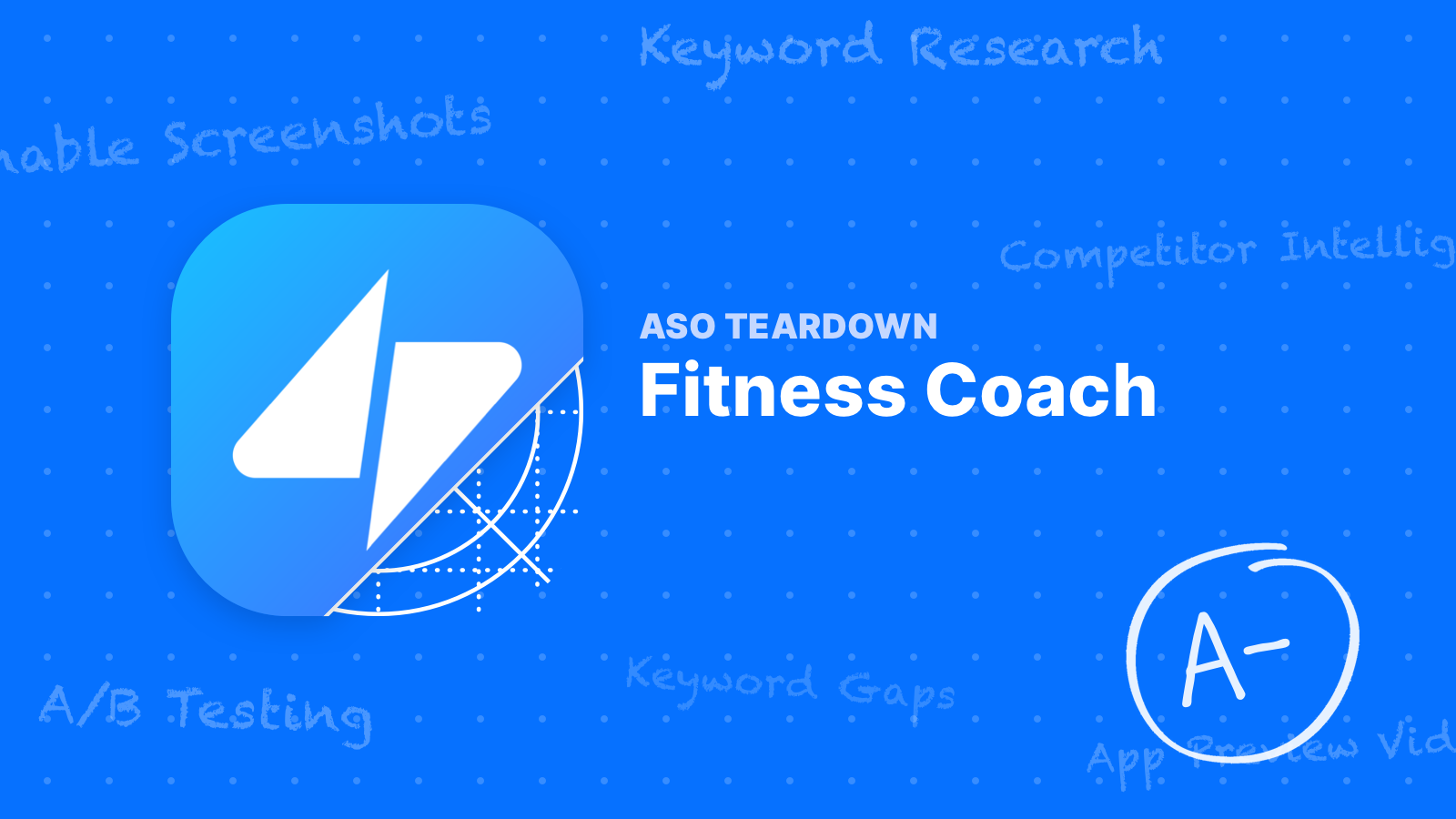 The market for fitness apps isn't small and has been growing steadily over the last few years. With lockdowns forcing millions to exercise at home, fitness apps have become a necessity and not just a nice to have.

One app gained and maintained the most traction in this time—Fitness Coach (which we covered in the first issue of This Week in Apps). The leader of its category, and the app we'll be analyzing in this teardown.

Overall, Fitness Coach gets an A-

The 411 on Fitness Coach

Fitness Coach is just about a year old, and for most of that year, downloads weren't stellar. But then came the need for working out at home and changed everything.

Here's how it's performing in the U.S. App Store, based on our App Intelligence:

The Competitive Landscape for Fitness Apps

The health and fitness category is competitive, and the numbers aren't small. They tend to grow much higher around January when many resolve to get in shape. Here are the top fitness and workout apps in the category: 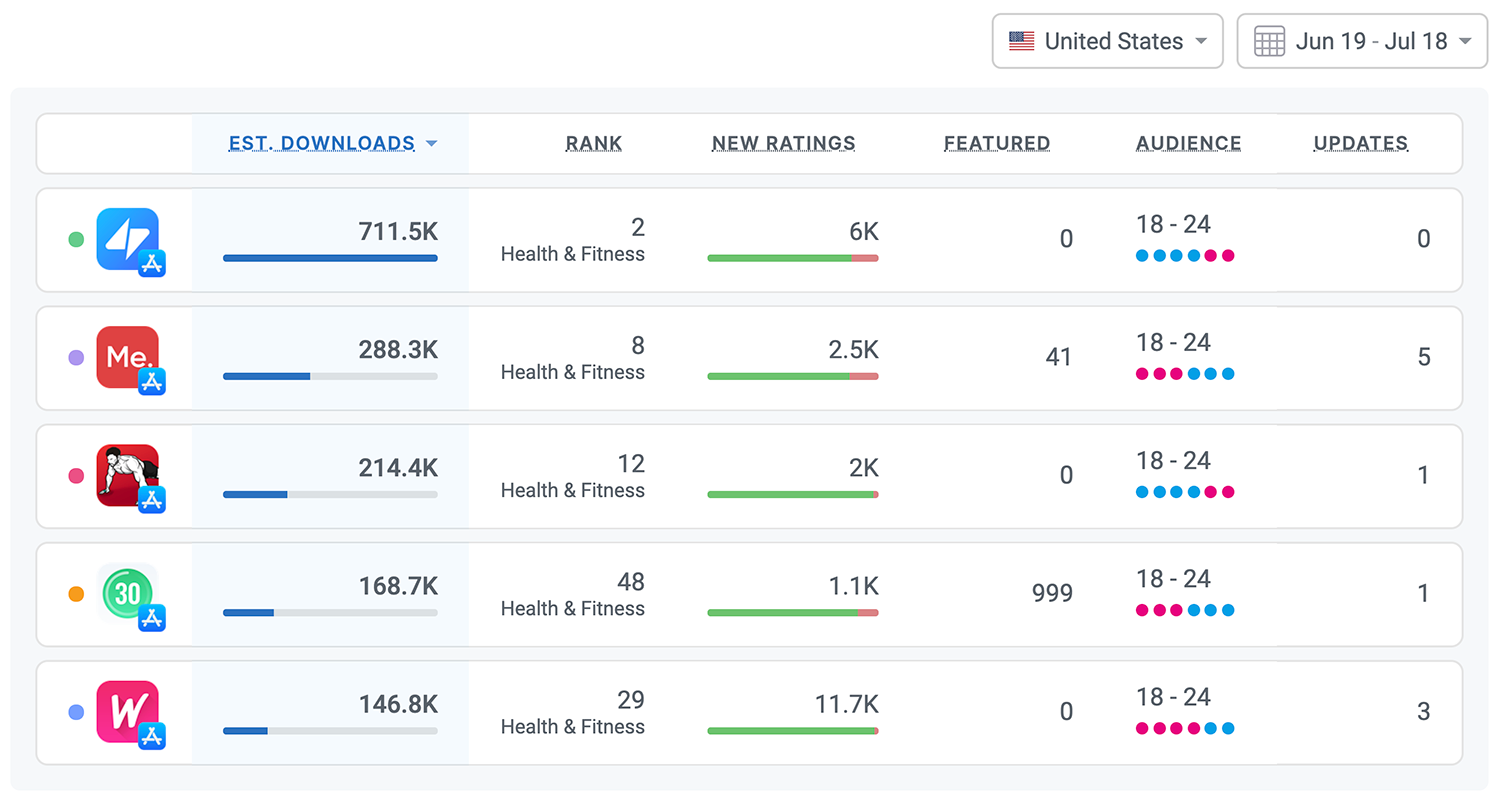 There are quite a few competitors. If we had to list them all, you'd need to scroll for quite a bit.

It's hard to tell how an apocalyptic event, like the entire world locking down for a while, will impact app downloads. To some, it meant bye-bye downloads, but for others, it was a complete game-changer. Fitness Coach is in the latter category. 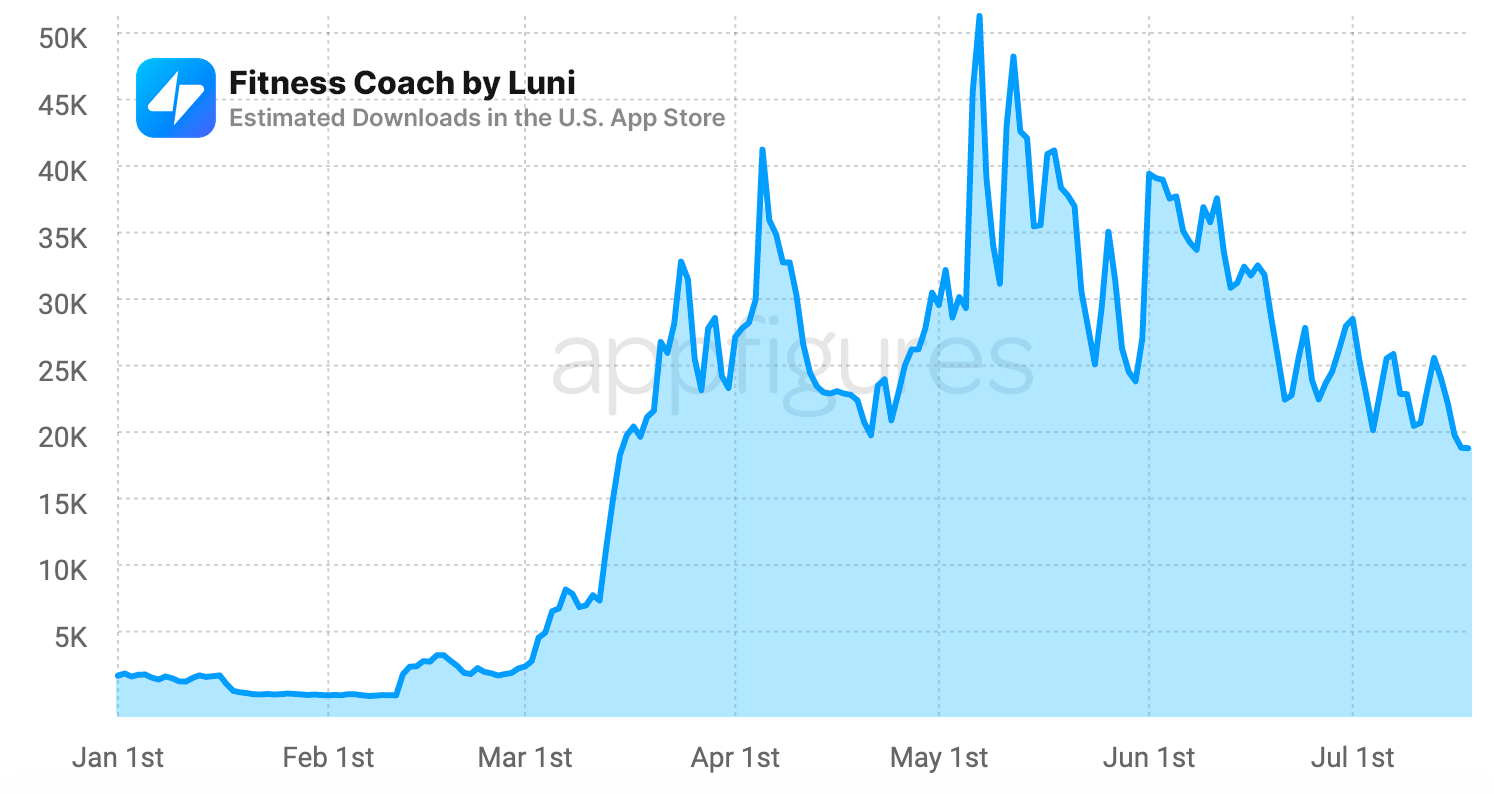 We'll start the analysis with the keywords Fitness Coach has in the name + subtitle. Those send the strongest signals to the App Store's algorithm.

Let's take a look at where Fitness Coach is ranked for these keywords:

That's right, both "fitness" and "workout" have a competitiveness score of 100. That's quite a challenge and could explain why Fitness Coach chose not to use any other keyword in its name. That, however, isn't a great choice, as you can see by these results.

I expect more from the category's leader in downloads. Let this be a reminder that just having the downloads isn't enough when the competition is so fierce.

Now, let's reverse-engineer Fitness Coach's keyword list. The list isn't public, but we can attempt to uncover it by looking at all other keywords the app is ranked in. We believe it looks something like the following:

Fitness Coach may have the downloads, but it trails in ranks, and that's likely because of a keyword list that isn't optimized. If our calculations here are correct, Fitness Coach is trying to attack too many keywords through the keyword list. The opposite of what they're doing with the app's name. A missed opportunity for sure.

Where Else is Fitness Coach Ranked?

The combination of the name, subtitle, and keyword list propelled Fitness Coach into a few more keywords. Here's the first page of results sorted by rank: 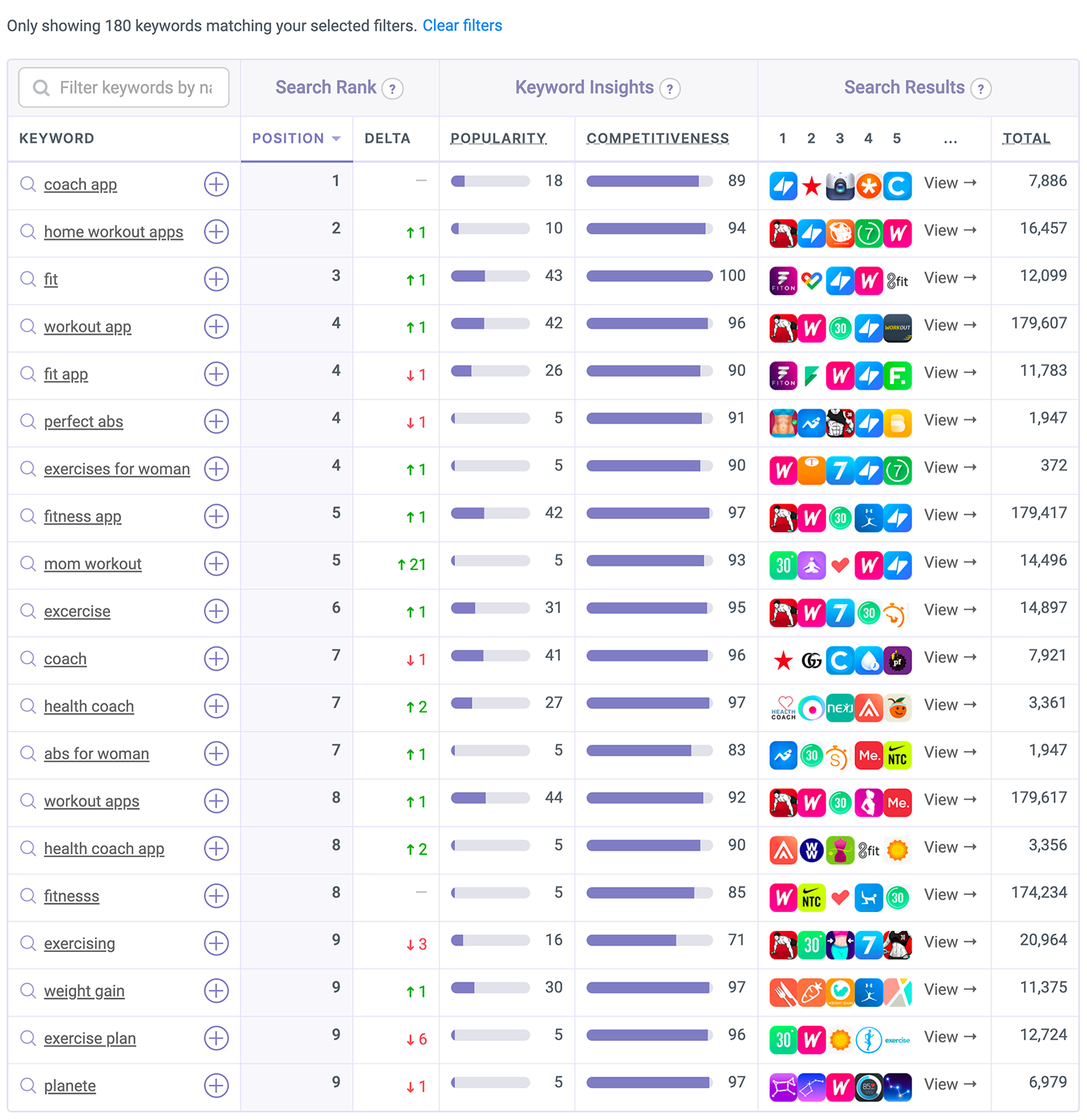 Not the worst, but also not the best...

It looks like someone tried some applying best practices but didn't follow through. There are captions, there is lots of contrast, and the font makes them very easy to read. But... only some are actionable. There's also good use of the app's UI here, especially the parts that show people in action, which is always a great way to increase engagement. But... there's some obvious repetition that doesn't feel intentional.

Lastly, and this one's important, the captions attempt to make use of the keywords, which is good. But... they don't align, which causes confusion. The kind you may not think about consciously.

With a few tweaks, these screenshots can be great.

Fitness Coach has an App Preview video, finally! It's exactly what I expect to see from an app in this space with so much competition.

The video is a mix of the app in action, and callouts with the app's benefits. A healthy mix that captures attention, highlights what makes the app unique, and shows it in action.

The folks at Luni are doing something right because the app leads the category in download. But when it comes to ASO, it's not all there just yet. It is close though. A few minor tweaks to the app's name, a more focused keyword list, and a few touches to the screenshots will ensure Fitness Coach dominates rank results too.

Do you know how your downloads compare to competitors? Which keyword competitors are using to get more downloads? Appfigures gives you the tools to answer those questions, and much much more.

Outsmart your competitors and dart ahead. Get started →

ASO Teardown: Lessons Learned from Digging into the ASO Strategy of 12 Popular Apps

In this special edition teardown we're looking at the most common takeaways.