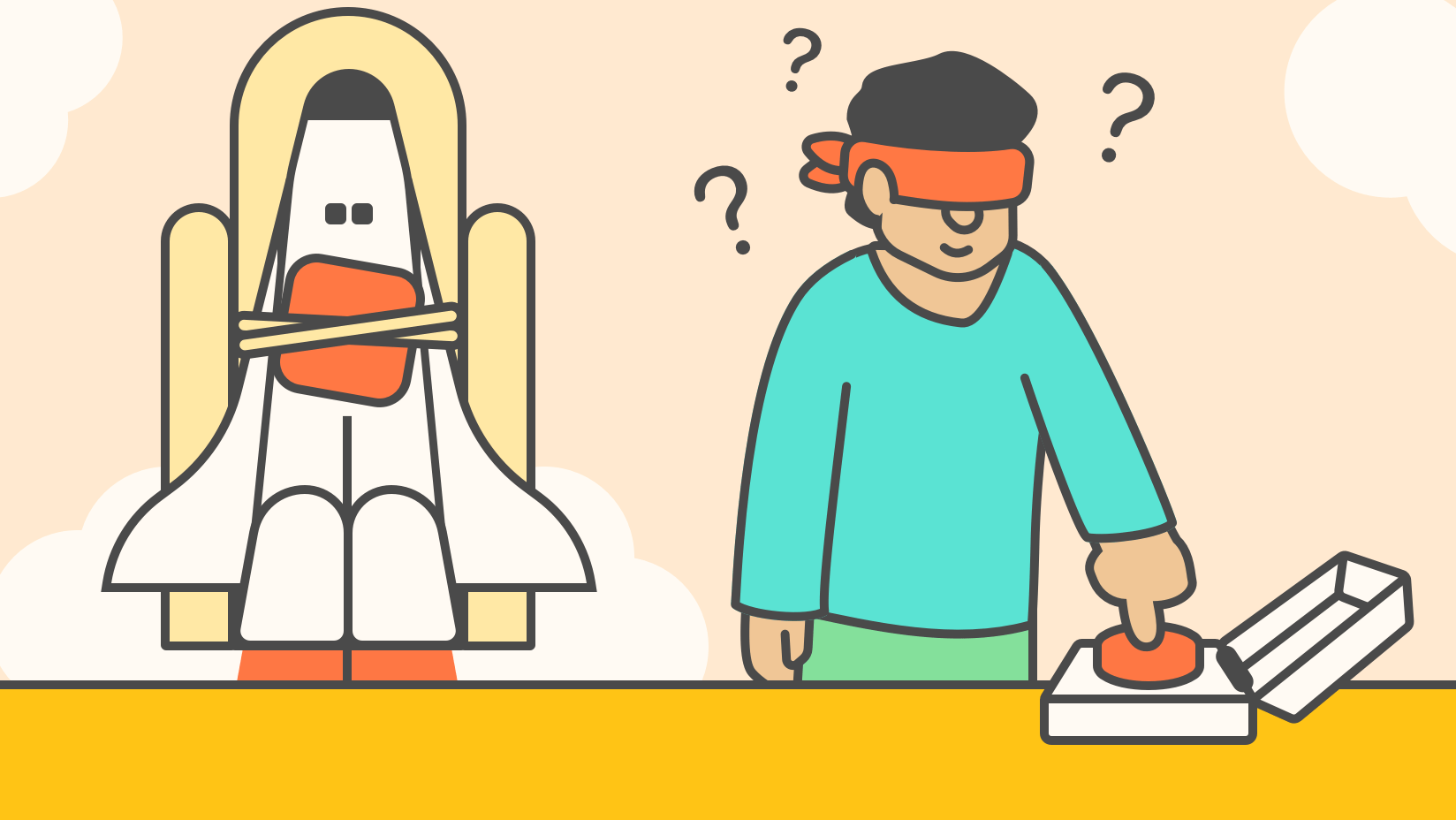 Launching a new app or game is as much about how ready it is for the store as it is about what you've built.

Many developers trust their gut and intuition, jumping blindly into development, launching it, and then waiting for the downloads to arrive.

While that might work for some lucky folks, it doesn't for the majority of us. You may even know the feeling.

But it doesn't have to be this way!

An idea is a great starting point. Be it from your own experience, something you heard, or a crazy one you had in the shower. But not all ideas actually turn into successful apps. Even the ones that sound great. Why? Because the success of an app requires 1. that enough people would want it, 2. that those people are willing to pay for it, 3. that it's unique enough, and 4. that they can find it easily.

Using gut and intuition to determine market size and download/revenue potential is a recipe for failure.

A better way to answer these questions is by doing a competitive analysis, which may sound complicated but really isn't. What it does require is good data.

The Key to a Good Launch

Validating an idea is a fairly straightforward process. You find similar apps, look at their performance (downloads and revenue), and create a benchmark. There's more you can do with competitive research, which we'll get to soon, but this is the critical part. Most successful apps and games you know are probably successful because their developers did this before starting development.

Here's how to use it.

1. How Big is the Market

Building a great app or game is an investment. It might be your nights and weekends, your full-time job, or hiring someone else to do it. Unless you have infinite time or money, you'd want to make sure you're not wasting it on the wrong idea, so the first question you should ask is whether there are enough people that actually want it.

That "yes" turned into a "no" (hopefully) very quickly.

A quick way to identify competitors for your idea is to search for them using Keyword Inspector.

Let's take, for example, word games. Here's what Inspector, which searches the store and adds a layer of intelligence, is showing in the US App Store: 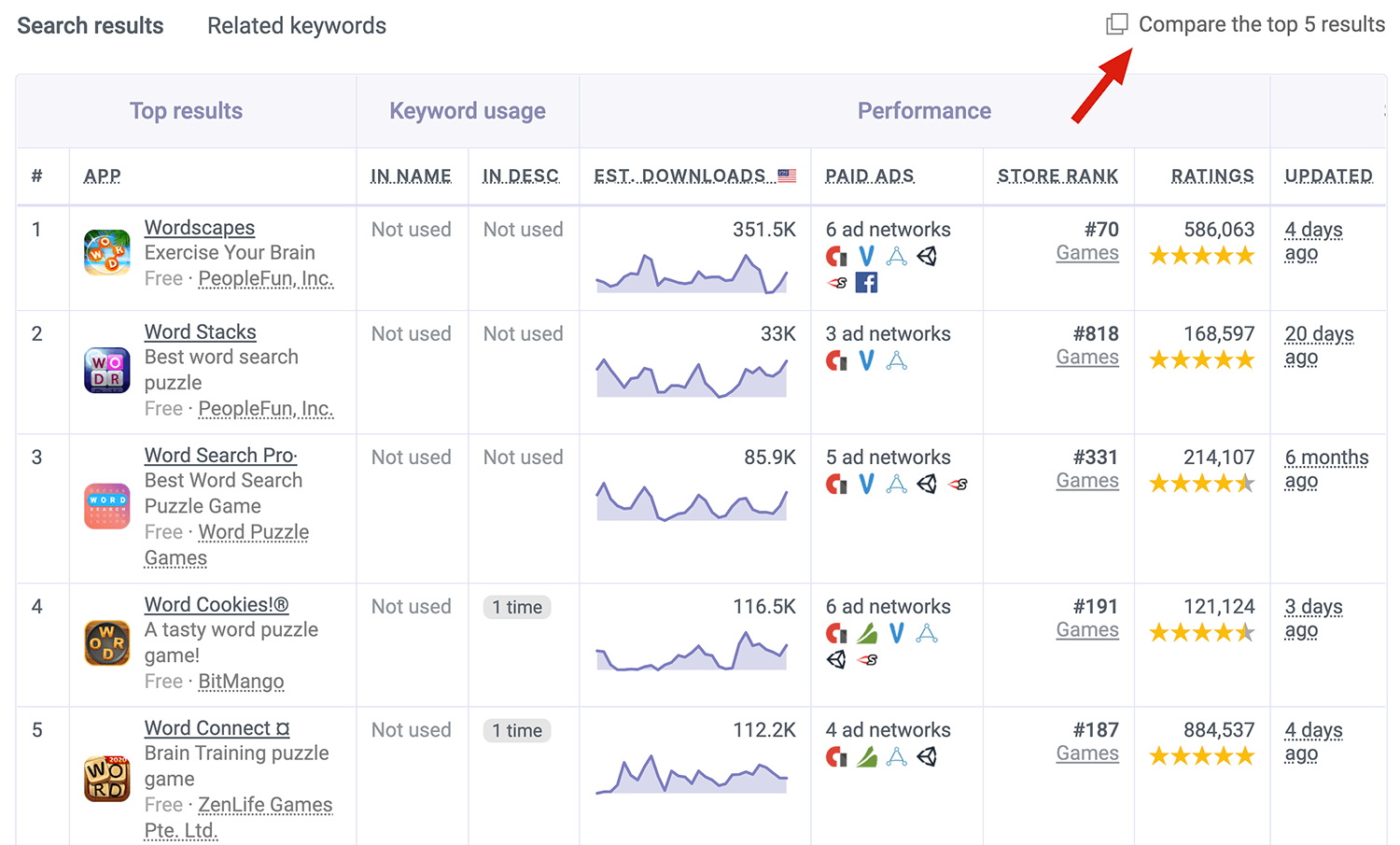 And let's dig into those a bit more with Competitor Intelligence: 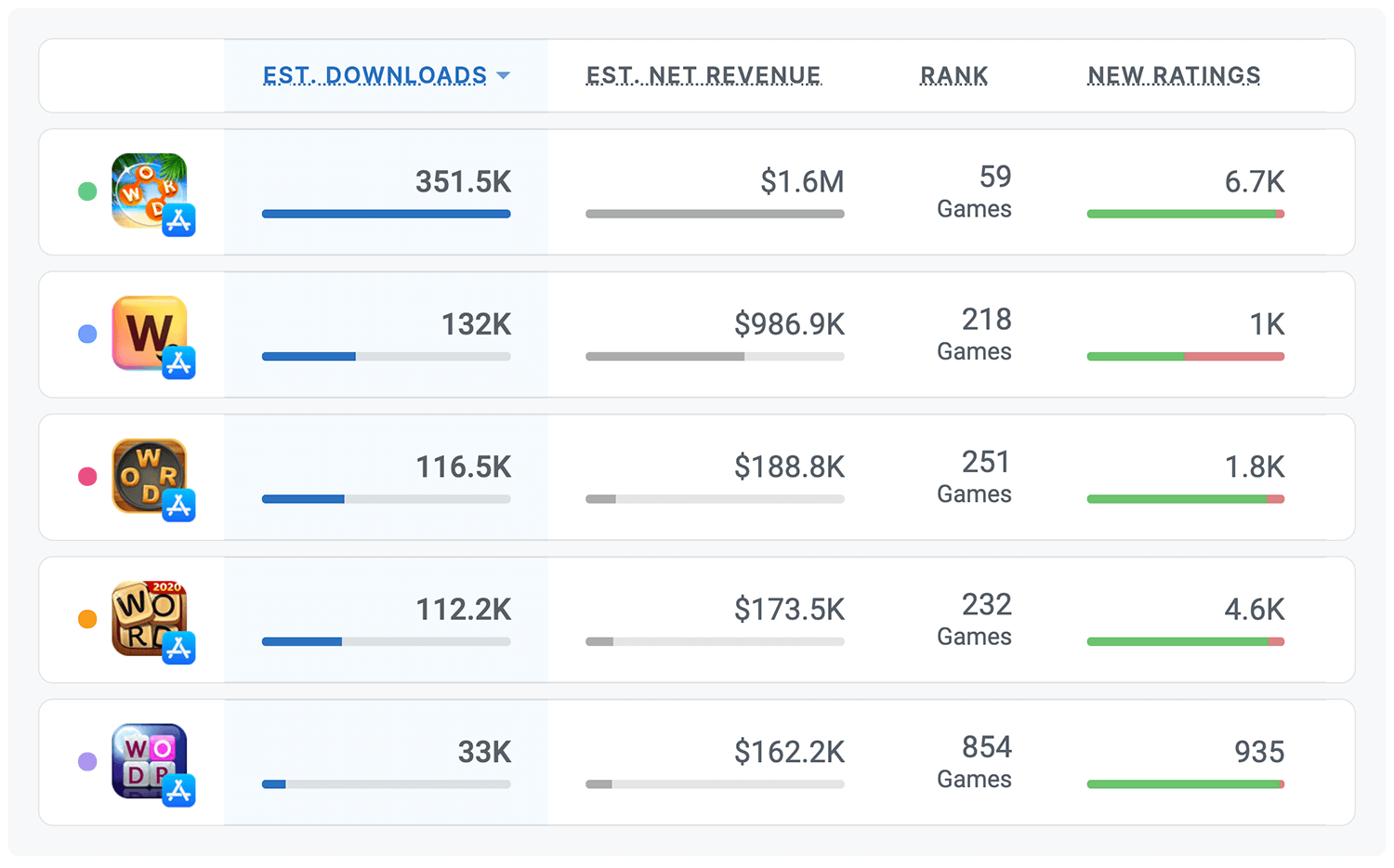 These figures show the estimated downloads and revenue in the US App Store in the last 30 days.

Based on our estimates, in the last 30 days in the US App Store, word games were downloaded 745K times and brought in a little over $3.1M in net revenue.

There's demand, and those users are willing to pay. Good start.

The current snapshot is a great way to tell if the market is big enough or not. The next step, however, is to see if it's growing or not.

For that, we can look at download estimates over time.

Continuing with the example of word games, here are estimated downloads for all five, going back to January of 2019: 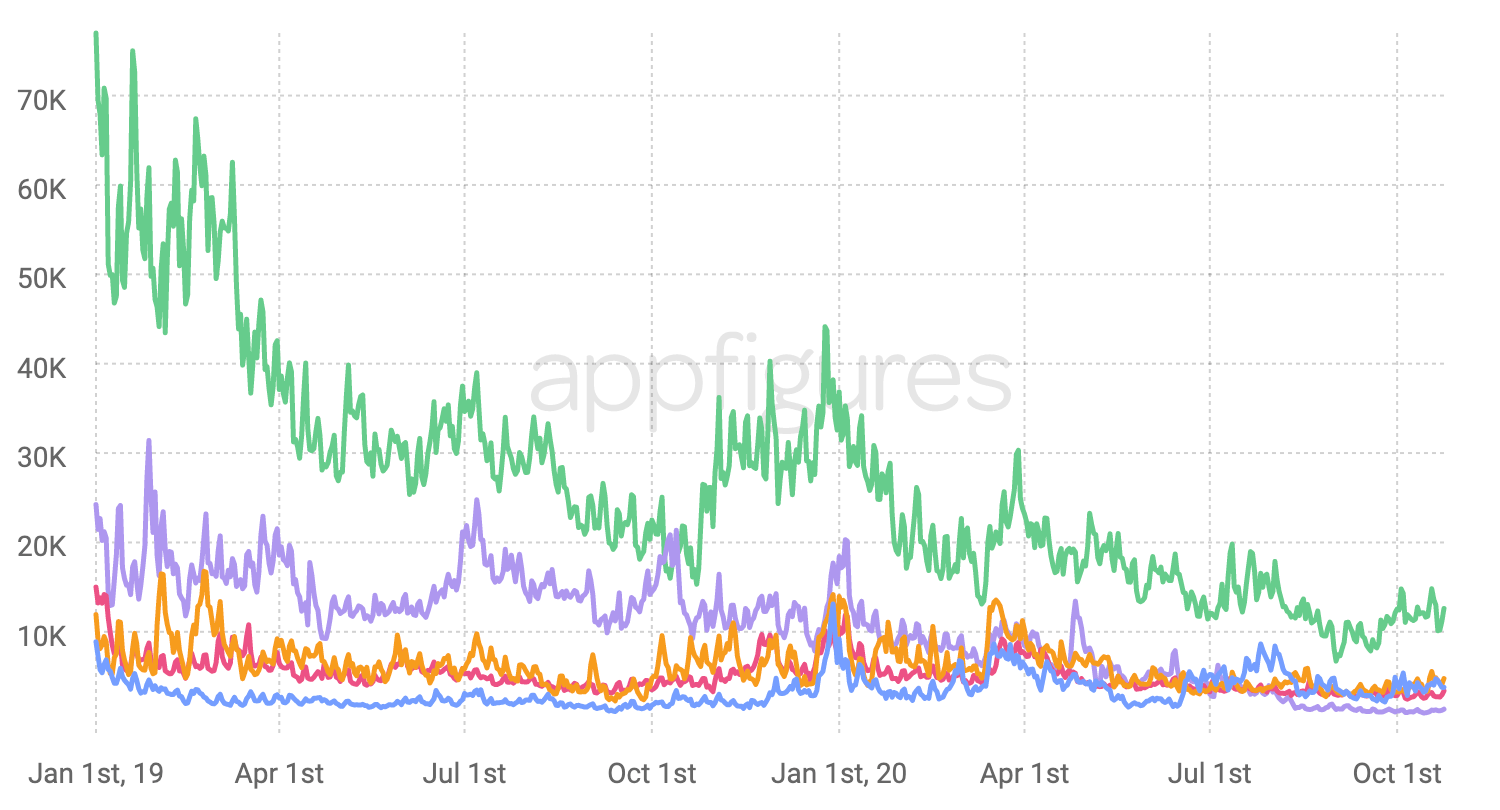 Now... This trend, which is pretty consistent with all games, shouldn't be ignored. In the last 20 months, demand has slowed down to nearly a quarter of what it was. This category is shrinking, and by the time your game will be ready might be even smaller.

You may want to put this word game idea aside for now.

3. Are Users Willing to Pay?

We looked at revenue and downloads already, so we know what's possible, but another important aspect of monetization is how likely are users to actually make a purchase in the app or game.

Whether your app is paid, uses in-app purchases, or subscriptions, it requires that a user make the decision to pay you.

A quick (and dirty) way to tell if users are willing to pay is by looking at the revenue per download ratio.

Continuing with the example of word games, dividing revenue by downloads gives us a range of $1.50 - $7.50. Considering not all downloads actually pay, the actual average is likely higher.

What does this mean? It means that these apps make roughly $5 per download, in aggregate. Put simply, users are willing to pay.

This is important knowledge that you can then apply when setting your cost per acquisition for paid ads or other promotional activities.

4. Is There Room for Another One?

Now that you know what you need to know about the market, the real question is whether there's room for one more. The answer to that is as much art as it is science because it relies on your app being great, offering unique functionality or gameplay, and being visible to relevant users.

A few ways you can leverage data to help answer that question is to:

With all the information you've collected so far, the question of whether your idea is worth investing in should be much simpler to make.

You might find the decision hard to make simply by looking at numbers because ideas tend to be entangled in emotions... But even if you choose to pursue an idea that may not look ideal on paper, there's still a chance it'll take off, and with the data you've collected, you'll at least be able to set an expectation.

Bonus: When to Launch

Analyzing competitors' downloads, beyond seeing growth, also allows you to identify obvious patterns that can help you determine when to launch your app or game.

Would you launch a new business app on Monday? Wednesday? Maybe Sunday? The same can be asked about games, and your best guess could be the right one, but using data is so much easier and more foolproof.

Let's look at an example, and this time switch it up and look at an app. Here are the estimated downloads for Microsoft Word, a business app we all know. 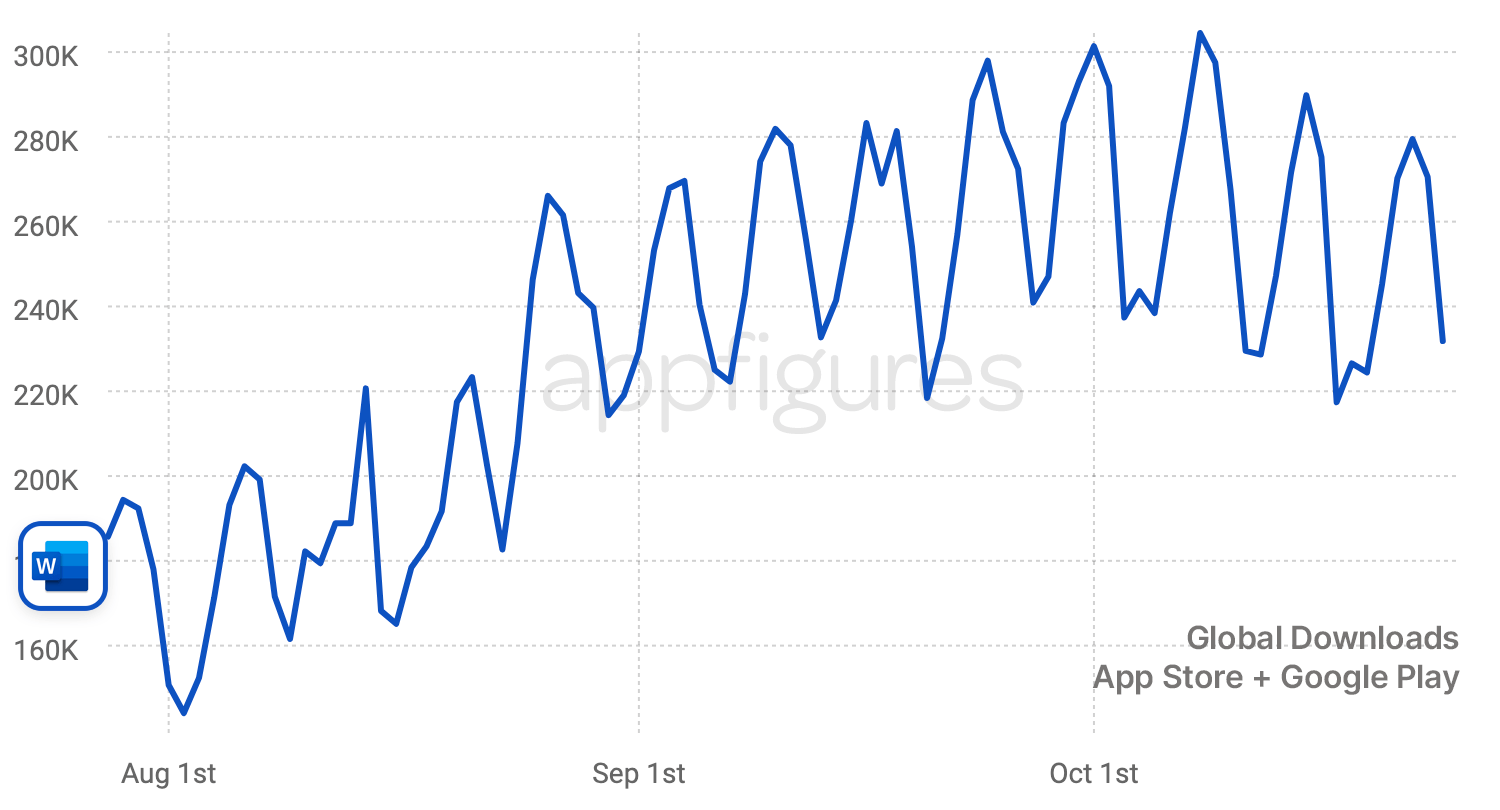 See those peaks? Those are the best days to release an app that's similar to Microsoft Word. Which day of the week do you think it is (without looking at the x-axis)? The most peaks in this chart happen on... Thursday. That's right. I would have guessed any other weekday but Thursday.

Bonus: Which SDKs to Use

Outside of the app's core functionality, there are many things you'll need that you either prefer not to build (ex. analytics) or simply can't (ex. monetization). For that, you're likely to use 3rd party SDKs. There are lots of SDKs to choose from, and you can try them based on what they claim to offer. Or... You can shortcut this trial and error process and see what other apps are using instead.

Looking at this table, we can quickly see a few things:

When you hear about successful launches, whether by large teams or indie developers, pre-launch research is usually to thank.

Regardless of how good of a developer you or your team are, success on the App Store and Google Play depends on more than code and design. These simple steps will help you avoid bad ideas that would waste your time, and give the good ideas a chance to succeed and be competitive.

What You Need to Compete

Whether you've got an idea to validate or an app in the store, using Competitor Intelligence will save you time, help you make more informed decisions, and grow faster by outsmarting the competition.

Grow your downloads and revenue faster and without costly errors by benchmarking and learning from your competitors. Here are 7 ways to do that quickly.