Apple gave developers a look at the latest update to iOS last week at WWDC, and it's clear this isn't a maintenance update. There are improvements and new features that will resonate with almost everyone who's using an iPhone.

That's great news for us developers because it means more downloads. But that's not all. Apple also packed changes to the store that will improve discovery and, best of all, tools developers can use to get more of those downloads. If they try.

Here's what's new in iOS 15 for ASO and how you can use it to get more downloads:

FYI - There are features Apple has made available but didn't document or announce. We'll update this article as we discover them.

iOS 15 will make it easier for apps and games that run events to promote those events and get users engaged with what Apple calls "In-App Events".

In-App Events will be displayed prominently in the app's page and also in search results and editorial content. 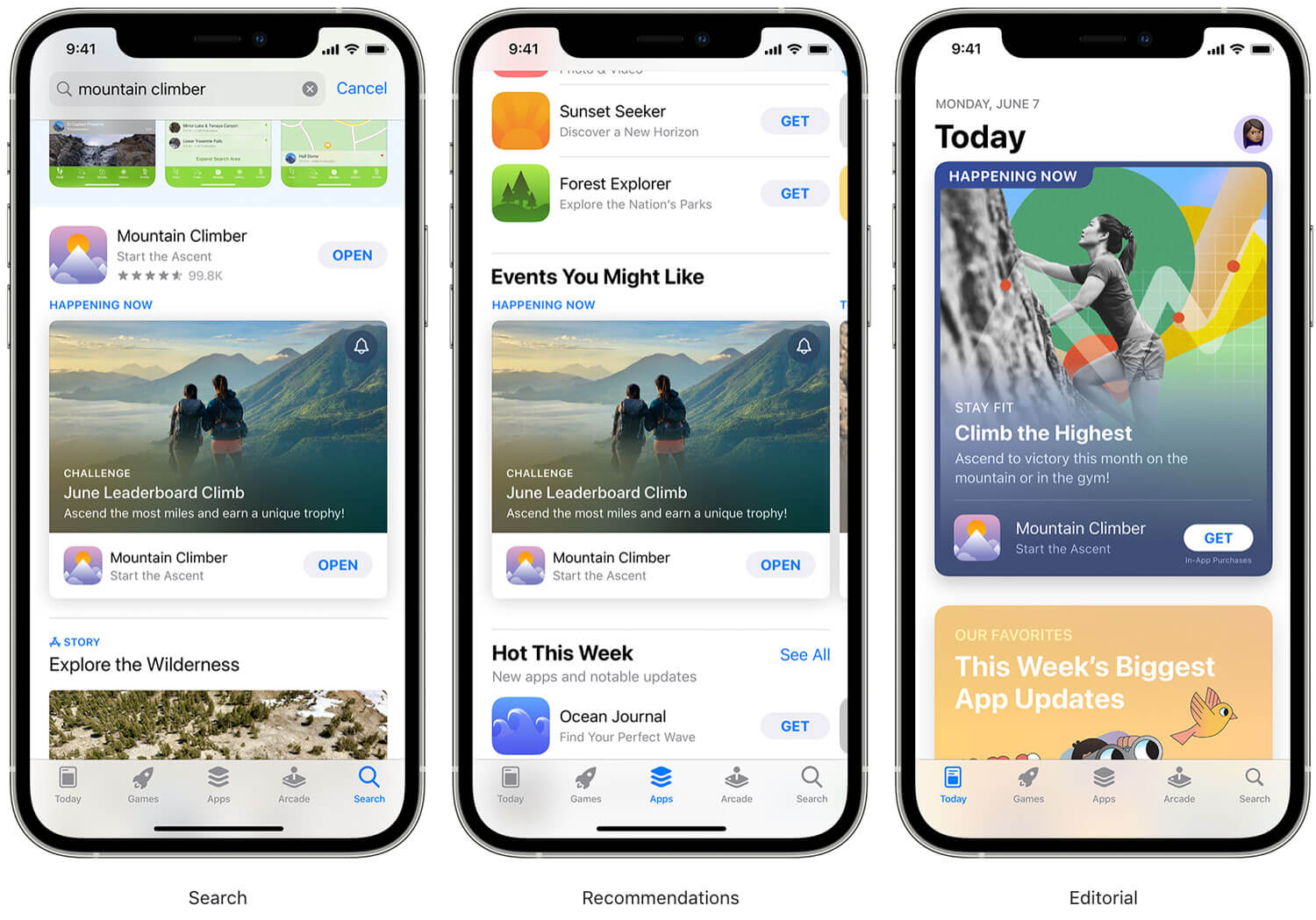 You may be thinking, "how is this relevant for ASO?". Well, App Store Optimization is about improving discovery, and with In-App Events, Apple is handing apps and games that can take advantage of this feature new avenues to get visibility (and downloads).

What to do: This one's simple, if you run events that are relevant in-app/game, register them with Apple as early as possible. This can include trounaments, new releases, or even out-of-app events like a sports and openings. As long as the app will have something relevant for the event, it counts.

If you don't, think of whether you can. It'll earn you another spot in search results, and it's also known that Apple likes to shine its spotlight on apps and games that take advantage of new features, so you could get even more visibility.

The big streamers and popular games are sure to take advantage of this one day-one, but Apple usually features big and small names, so that's your chance to get in front of a large audience. 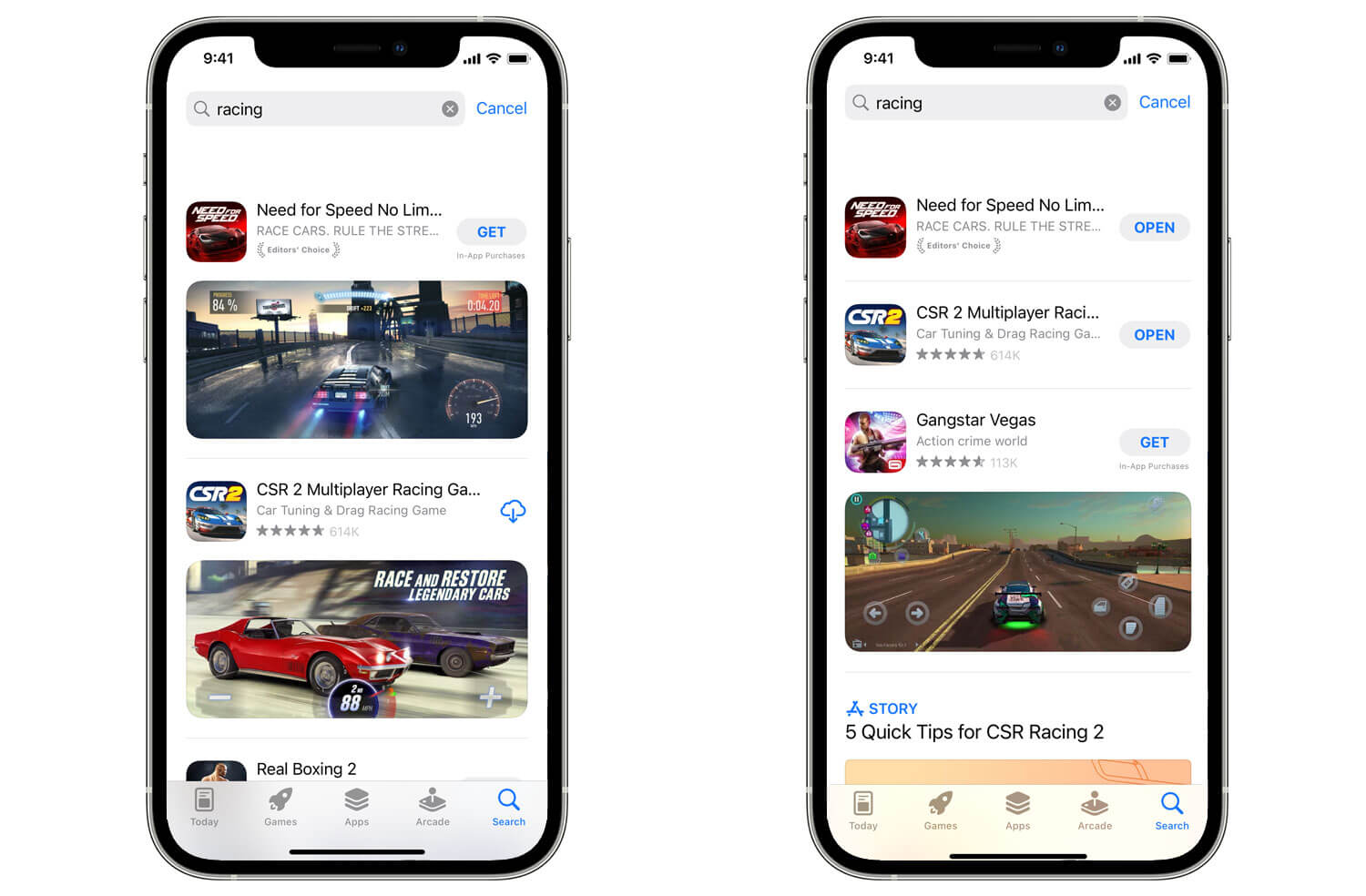 This wasn't announced by Apple, so it might change, but so far, we've seen that apps and games that are already installed don't show their screenshots in search results. This is a big one!

How's this relevant for App Store Optimization? It means that search results could now include more results without any scrolling, and that not being the #1 result for a big keyword is okay if users are looking for an alternative.

What to do: More results = more chances to get seen even if you're not the highest-ranked result, so to take advantage of this, you'll need to go back to basics and spend time optimizing the keywords where you're close to be closer.

Status: This feature is available now that iOS 15 has been released.

Even More Discovery with the App Store Widget

Another nifty little addition that didn't get a lot of screen time in any of the sessions was a new widget Apple is making available in iOS 15 that will display editorial content (aka. apps that are featured) in a widget.

Getting featured on the App Store gets a lot of visibility, and with the new App Store widget, people who aren't even logged into the store will see your app right on the home screen

What to do: Get Apple to notice your app so they can include it in editorial content or feature it on the Today page. Getting featured isn't the kind of thing you can force Apple to do, but there are certain actions you can take to get closer. Here are my tips for how to get featured on the App Store.

Status: This feature is available now that iOS 15 has been released.

And now, let's move to the big changes, starting with Custom Product Pages, which is exactly what the name says.

In the new App Store, Apple will allow developers to create different variations of their apps' or games' App Store Page. 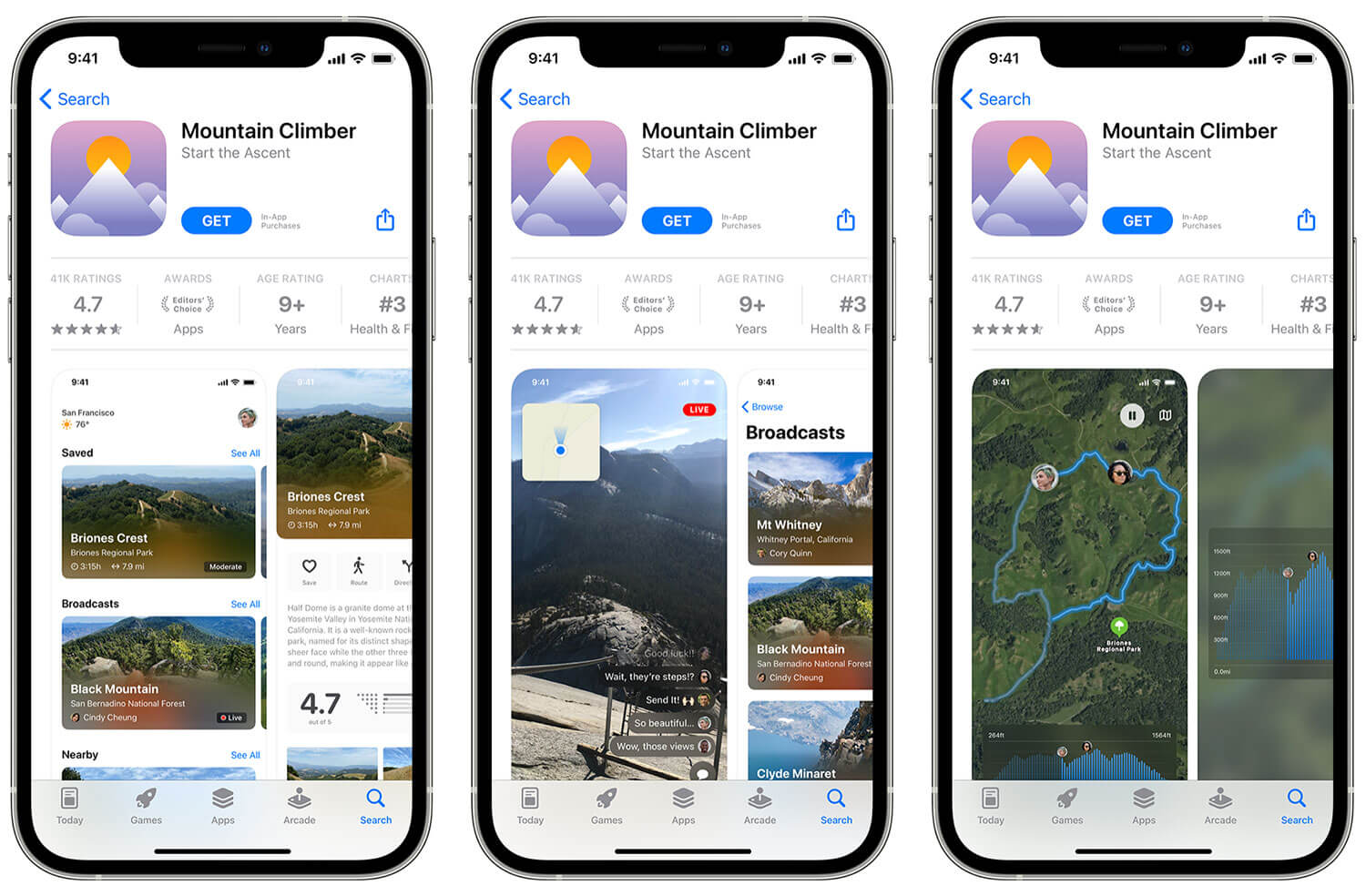 With Custom Product Pages, you'll be able to create a page that has different screenshots, App Preview, and promotional text than the default page. This custom page will have a unique URL that you can give anyone outside of the store.

You'll be able to curate the content different groups of users will see when they get to the App Store, so they see exactly what's most likely to help them understand the value of the app or connect with a game quickly, leading to a download.

Let's look at an example: Say your app gives sports news and scores. You're probably promoting it to fans of a variety of teams. You also try to show as many teams as you can in your screenshots, so fans get to see their team at some point. That's pretty challenging.

With custom pages, you can make a page for every team, and when you promote your app in that fan club's forum, use the special link to take those fans to the app's page showing their team all over.

That's a lot more likely to earn you a download.

As with everything good we get from Apple, you'll be limited to 35 pages, but what makes up for it is that you won't need to release a product update to create or update a custom page.

What to do: If you're promoting your app or game to different types of audiences, think about what they would find useful or engaging first and set up a unique page that shows that off. It might be a specific feature or a game character, but it has to be something that would resonate with that particular audience best.

It could be a shuffle of screenshots or new ones altogether. There's a lot of time before this feature is going live, so you have enough time to research and put together new screenshots.

And now, for the most important update to iOS since dropping the ratings-reset in iOS11: A/B testing in the App Store. Apple didn't call it that for some reason, but it is.

A quick primer on A/B testing: Colors, fonts, and composition are a very subjective subject, so it should come as no surprise that some combinations of those get more downloads than others. It's not always intuitive what's the best combination, so good marketers try a few for a short time and use the one that performs best.

Do users want a friendly app or a trustworthy one? You can experiment by setting up two variations of your screenshots. The first will have an orange background and the second blue. Then, for a short amount of time, let's say 30 days, half of the people who see your app in the store will get the orange variation while the other half will get the blue variations.

After 30 days, you'll compare the number of page views and downloads between them, and the one with the higher conversion rate is your winner.

After running a few A/B tests, you'll wonder why you guessed before. That's what happened to me...

FYI - I'm such a big believer in A/B testing that I recently published a guide with 16 A/B tests you must try to get more downloads. It's one of my most popular guides.

Up until iOS 15, you couldn't do any of this directly in the App Store. You could on Google Play, but if you wanted to try this with your iOS apps, you'd have to resort to 3rd party services that fake the App Store. Those weren't terrible solutions but weren't all that great either (and cost a pretty penny).

When the new OS launches later this fall, we'll be able to A/B test right in the App Store. I hope you see why this is so exciting now!

What to do: Start by thinking of a few things to test. I suggest starting with screenshots because they usually have the most impact. You can test pretty much anything, be it color, font face, size, text, etc. Refer to the link I have above for ideas. But, I recommend testing only one thing at a time. If you're testing colors, change only that. If you're testing caption placement, don't also change the color. When you mix experiments, it's hard to tell which element won and which got a free ride.

Once you know what you'll be testing, make a variation of it. A couple of things I learned about A/B testing:

When Product Page Optimization launches in the fall, you'll be able to start experimenting right away, which means you'll get to more downloads more quickly.

There's a lot more to A/B testing, which I'll be talking about in the future, both in article format and on our Mastering ASO series of live videos, but this should be a good start for now.

If it wasn't clear before, the release of iOS 15 is a clear sign that apps and games have to invest time into optimizing their presence on the App Store to get (more) downloads. If you've built an app or a game that's truly great, you have to make sure everyone knows about it.

Optimizing isn't complicated or impossible. It requires trying and experimenting. Apple's built-in tools give you the start you need.

App Store Optimization is part creativity and part science. The creativity comes from you and your knowledge of your app or game. The science comes from tools that surface suggestions, give you insight into the competition, and offer intelligence to help you validate your decisions. Get started with our ASO Tools →

In 2022, App Store Optimization is ESSENTIAL for growing your app's downloads. Use this ASO checklist to make sure your app is ready for the App Store and Google Play.