I can't stress enough how important ratings are. it's what Apple's algorithm looks at first, and what matters more than how many downloads you get. Which means it's your ticket to the top. This Keyword Teardown is another great example of that, and as a bonus, I'm going to give you a simple and quantifiable way to figure out how much you need to push for new ratings to rank better in your group.

FYI - You can hover/click on an app's name to see it's name and subtitle in context of the analysis.

Countdown timers, a feature that's technically built into all iPhones, is a surprisingly popular keyword. And unlike other features that have an associated built-in app, Apple's Clock doesn't appear in these results. 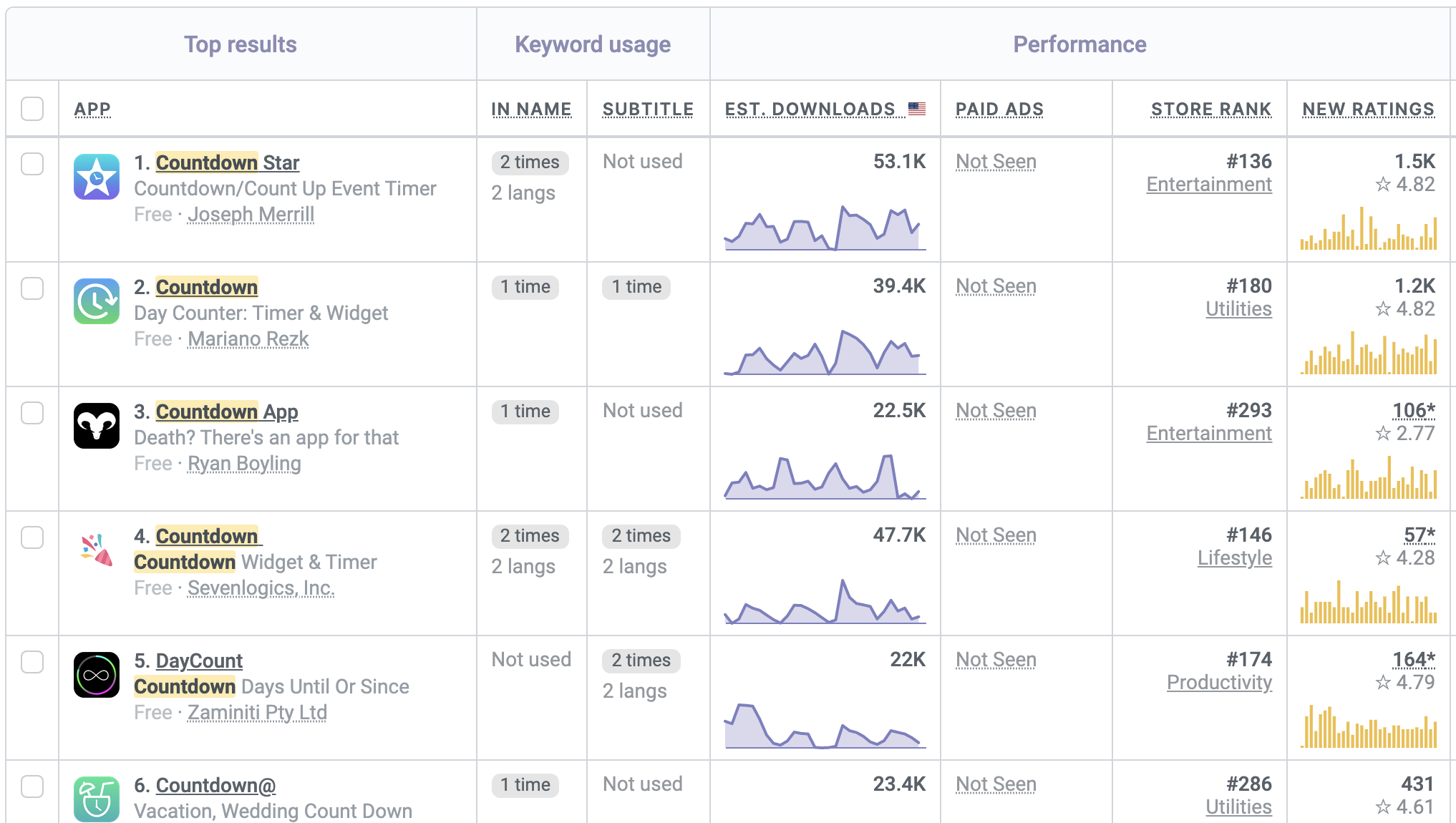 Before I start analyzing, let me point out that all of these names are fairly similar. Why? Because this little keyword, that I wouldn't think many people search for, is actually very popular. Also, countdown timers are pretty limited...

So, what should you do to get to the top? Follow the basics: focus on the main keyword, eliminate duplication, and make sure you convert downloads into ratings. Let's see who got it right.

Starting at the top, Countdown Star got it almost right. With the most new ratings of the bunch, the keyword in the name, and overall very few other keywords, it makes sense it'll be the algorithm's top choice.

Its ratings to downloads conversion rate for the last 30 days is 2.8%. We'll use this number as our benchmark.

Right behind it is Countdown, which does everything right! Super focused and no duplication. But it can't beat number one on ratings, so it's in second. If you look back a bit longer, back to the summer, you'll see its ratings were much weaker. The algorithm remembers.

At #3, we have Countdown App, which seems to be doing things right, except that its downloads to ratings conversation rate is 0.5%. Yup, only one half of one percent of users who download the app rate it. Compared to its top rivals, this seems to be a grave error by the developer. Matching their rates will cement its place in 3rd, but getting it to be higher could propel it to second or even first position. And they already have the downloads.

But it gets worse. 4th place, Countdown, converts only 0.1% of its downloads into new ratings. But here's why it's even worse. This app gets more downloads than both second and third place. If it just tried to get ratings, it could easily skip both. With a bit more elbow grease, it could also overtake #1—So much opportunity.

FYI - If you're also thinking, "how's it possible for two apps to have the same name???", the answer is simple. The two aren't identical because the second one has an invisible character in it. I'm not sure if that's by design (this hack) or not, but seeing as it's older, I think it's by error. The App Store we very different 11 years ago.

DayCount, in fifth place, makes multiple errors... I really hope they're reading this. The first is not including the keyword in the app's name and letting the subtitle do the driving. It's not the best driver. But including it in the name should easily pop it into 3rd place.

Then we have the miserable downloads to ratings conversion rate, which is just 0.7%. With as many downloads as #3, fixing the name (yes, it's broken like this) and focusing on ratings can easily push the app higher.

What You Can Do Right Now

What's your downloads to ratings conversion rate? Better yet, how does it compare to your competitors? Ratings are very important, so if it's lower, you must focus on increasing it. If it's on-par, then it's lower, so same suggestion.

See where your apps are ranked, track trends, snoop on competitors, get smart suggestions, and more, here.

Why is No One Targeting This Keyword?

Use keyword opportunities to get more visibility for your mobile apps. Here's a simple example of one.