You can get our ASO tools for half the price during our Black Friday promotion + a chance to get an ASO consultation with me. Claim 50% OFF →

Where you place your keywords in the name and subtitle can be the difference between success and failure. But! In addition to where they do, the direction in which one follows the other also matters. It turns out that the algorithm, like me, doesn't like reading backward.

Apple's and Google's search algorithms are black boxes and completely undocumented. But when you look at enough data patterns start to emerge. I analyze thousands of search results to reverse engineer how the stores decide which apps to rank and how to rank them. I share what I learn here, for you to learn from and get more visibility.

FYI - You can hover/click on an app's name to see its name and subtitle as you read the analysis.

The time tracker niche is small but competitive. Why do I say that? Because there are more than six thousand results for the search! With a popularity score of 39, it's worth fighting for. It's also a great example of just how much the direction of your keywords matters. 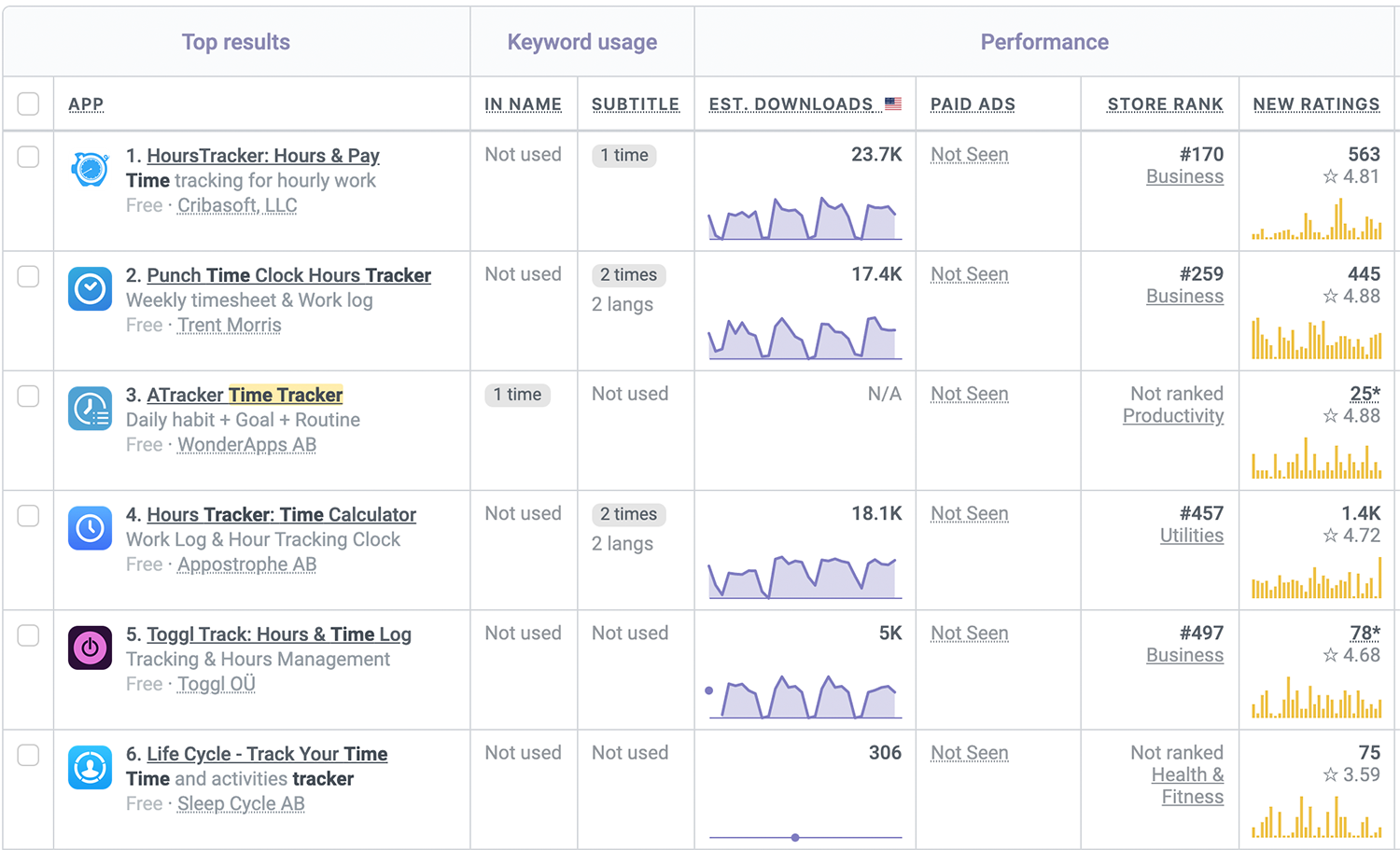 The area that's most interesting in this result set is #3 and #4, but let's start at the beginning.

HoursTracker wins this keyword by having enough ratings (not the most), a mostly optimized name/subtitle, and freshness. I say somewhat because it's not using the full keyword in the name but rather breaking it between the name and keyword list.

Important: It's doing that so it can target time tracking, which you can see in the subtitle. But! I'm pretty sure that's a mistake. When you look at the popularity scores for both keywords, time tracker wins, and by a lot (39 vs. 28). Let that be a lesson - Use your tools and not your gut. On the App Store, your gut is more likely to be wrong.

Continuing. Right behind HoursTracker we find Punch Time which has fewer ratings but uses both words in the name. The app's name feels like a list of keywords, which as a user, I don't enjoy looking at. But that's not why it's ranking lower.

It's ranking lower, even though it has the full keyword in the name and subtitle is because it has fewer ratings and because it hasn't been updated in two years. The algorithm cares about that.

Next! The third result is ATracker. It has very little in terms of ratings but uses the keyword the right way. In the name. But it can't get any higher because it doesn't have the ratings.

Here's where the real lesson is. In #4 we have Hours Tracks (with a space, unlike #1). It's got more ratings than all apps in this set. Combined! It's also using both parts of the keyword in its name. How's it not #1???

Although both words, time and tracker are both in the name, they're reversed. So the algorithm sees tracker time. In some cases, the algorithm would be okay with that, but in this particular case, it's penalizing it. Switch the order nd you'll see this app rise to the top.

This app is also targeting a lower popularity keyword... Gut isn't as good as data.

Last is Toggl, which is splitting the keyword between the name and keyword list, like #1. It has very few ratings, so it can't really compete. It's also targeting the wrong keyword in this case.

We learned two (and a half) important lessons from this search.

The first is that you shouldn't reverse your keywords. If you end up needing to, aim for the keyword that's less important to be reversed. And speaking of importance, we also learned that you should look at the keyword's popularity score when choosing what to optimize for and not your gut.

Your gut isn't always right, data is, and with Keyword Inspector, all you have to do is search and you'll see the most relevant scores quickly.

The half is that how fresh your app is also helps. It's a weak signal, but a signal nevertheless.

What does optimizing for the most popular keyword in the App Store look like?