Black Friday just ended and I couldn't resist, so I took a quick look at search results and saw two interesting insights worth sharing, where the algorithm might behave in a way that doesn't make sense even though it really does.

You'd expect all the popular retailers to rank for "Black Friday" because they spend a ton on ads during that time, but... Not only do they not rank high, they don't show at all. Why? Because Black Friday, the search term, behaves just like any other search term.

Let me show you what I mean, and also why spikes are generally not helpful. 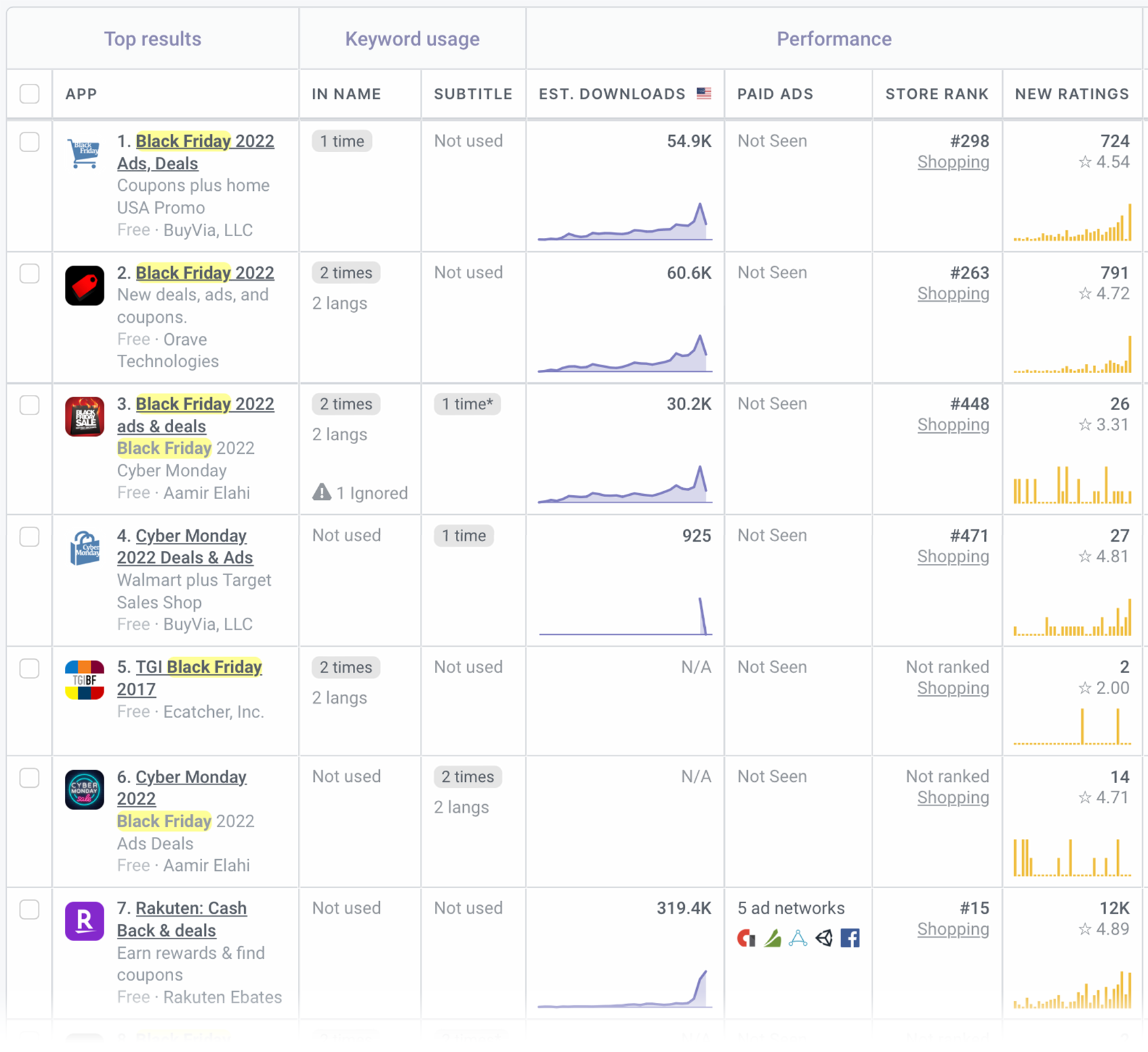 In first place we have one of the few apps that do this (almost) right. It uses the keyword right up front, in the name, and doesn't duplicate it. On the other end, it gets more ratings than most other competitors.

Astute readers will notice the app in the second spot has a handful more ratings and might ask why is it not the top result? It also uses the keyword right up front, in the name, and no duplication. And it also uses fewer words in the name which adds focus to the keyword.

Two things: the first is that a handful of ratings is generally not enough for the algorithm. But, that still doesn't solve it. The other, and more likely reason, is the trend of new ratings.

I've shown a few cases in the past where the algorithm prefers ongoing trends to spikes. This is such a case! See how the ratings spike for the second result while they trend up over a few days for the first?

That's something the algorithm cares about because a trend means popularity whereas a spike doesn't.

This is another reason to optimize how you ask for ratings, so downloads will consistently turn into new ratings, organically and not spiky.

In third place we have what looks like a careless copy of the top result. While it's using the name right up front and in the name, it duplicates it right away. Not a very creative one, but! This not-so-creative metadata gets to be third with under 30 new ratings.

The reason for that is another thing we've looked at before, and requires looking at more results. I won't make you wait though. The reason this one's ranking well is because no one else is really trying. And that's important to keep in mind - ASO is about beating the competition, not talking to the algorithm.

Fourth place, another copy of the top result but without the main keyword in the visible metadata, has the same number of new ratings but is ranked below because it's not using the keyword in the name

What we can learn from these two is that you need the keyword in the name to get the best results, and also that the keyword list is very important these days.

Want to see an even "uglier" example? Fifth place gets into the top 5 with just a couple of new ratings. Just a couple. Two. Why? Because it uses the keyword in the name and others don't.

Seems like such a wasted opportunity! I hope you aren't making this same mistake.

I captured the top 7 above because I wanted to show you how important it is to have the keyword in the name and have an optimized keyword list.

In seventh place we have Rakuten, which gets a lot of new ratings. More than all apps we analyzed so far and not by a little. Rakuten, however, isn't using the keyword in its visible metadata. I suspect it's in the keyword list but not very optimized, which lands it outside of the top 5 and almost always invisible to users...

There are a few ways to fix this and all are really easy.

Simple yet very effective. If you aren't already, you should do both right now.