Keyword Teardown #13 - It's Not Just About You

We talk a lot about what you can do to get ahead, but sometimes you can get ahead without doing anything. Well... You have to be ready for when competitors mess up. In this Keyword Teardown, we'll be revisiting a keyword we looked at in Keyword Teardown #10 to see what that looks like in action.

The photo editors market is competitive, active, and lucrative. There are a few incumbents in the space, which we saw when we analyzed this keyword for the first time. But now that a few weeks have gone by, the results are very different. 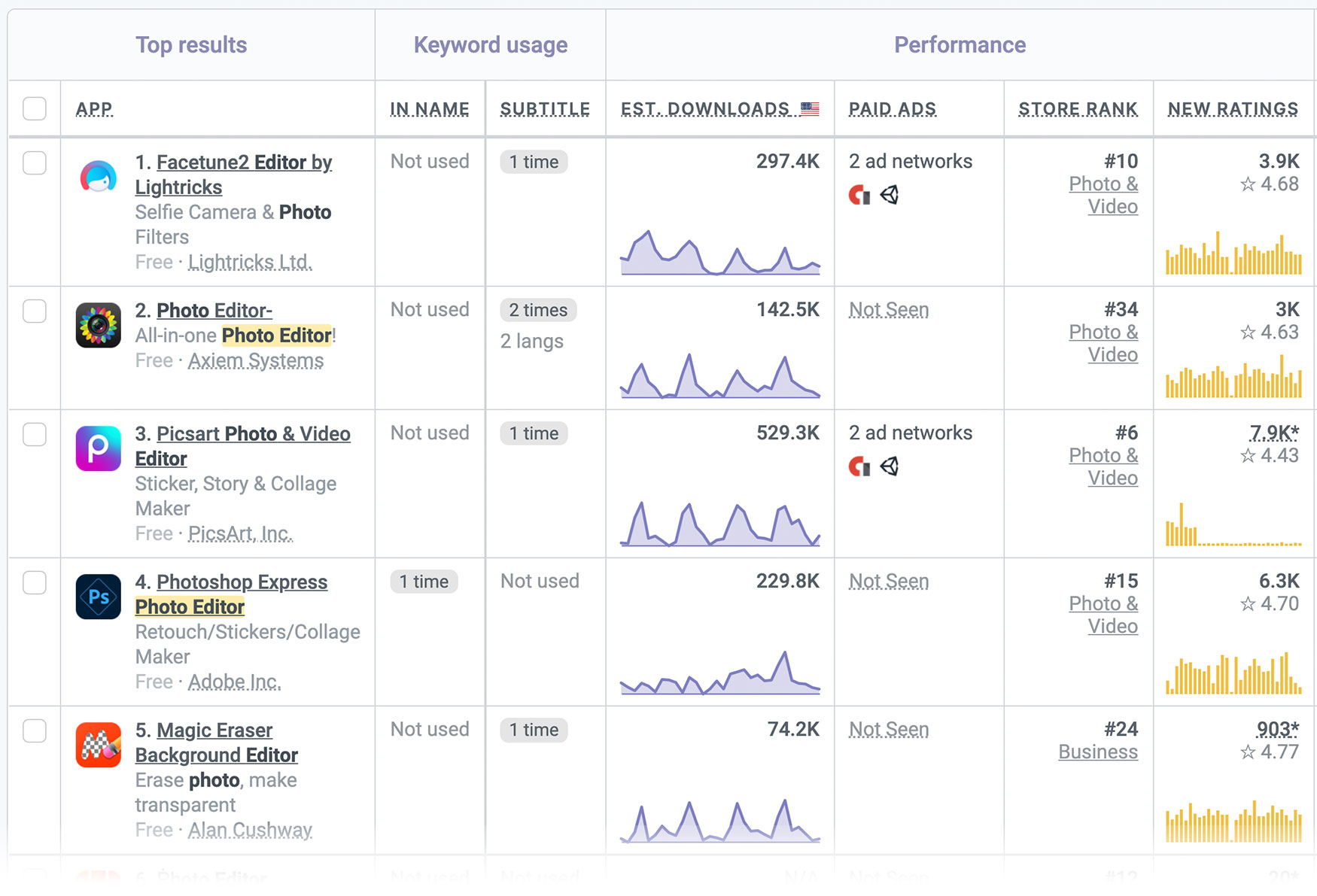 If you've glanced at Keyword Teardown #10, you've noticed that the top result, Picsart, is no longer at the top. That's the main difference here, but let's start at the top.

First we have Facetune2, which hasn't changed its name or subtitle and splits the term between the name and subtitle. It only got it to #3 last time we looked, but somehow it rose to #1 without changes. It does have almost the most ratings in this group, and that's what brings it to the top.

Right behind it is Photo Editor-. That dash there at the end isn't a typo. It's there in the App Store as well. We looked at special characters in that same teardown, so it shouldn't be too weird. The idea is to add a character that would allow the name to be unique but that the algorithm would remove, so it helps with search results.

This would work well, but... Axiem Systems, the developer of this app, commits the sin of repetition. The app's ratings are pretty high, so without the duplication I suspect this app can challenge Facetune for the top position.

In 3rd, we (finally) have Picsart. Picsart uses the term in the name and has a whole lot of ratings. That's how it got to the top before. But! If you zoom in on the ratings trend, you'll see the last few weeks have dipped very low. Very very low. 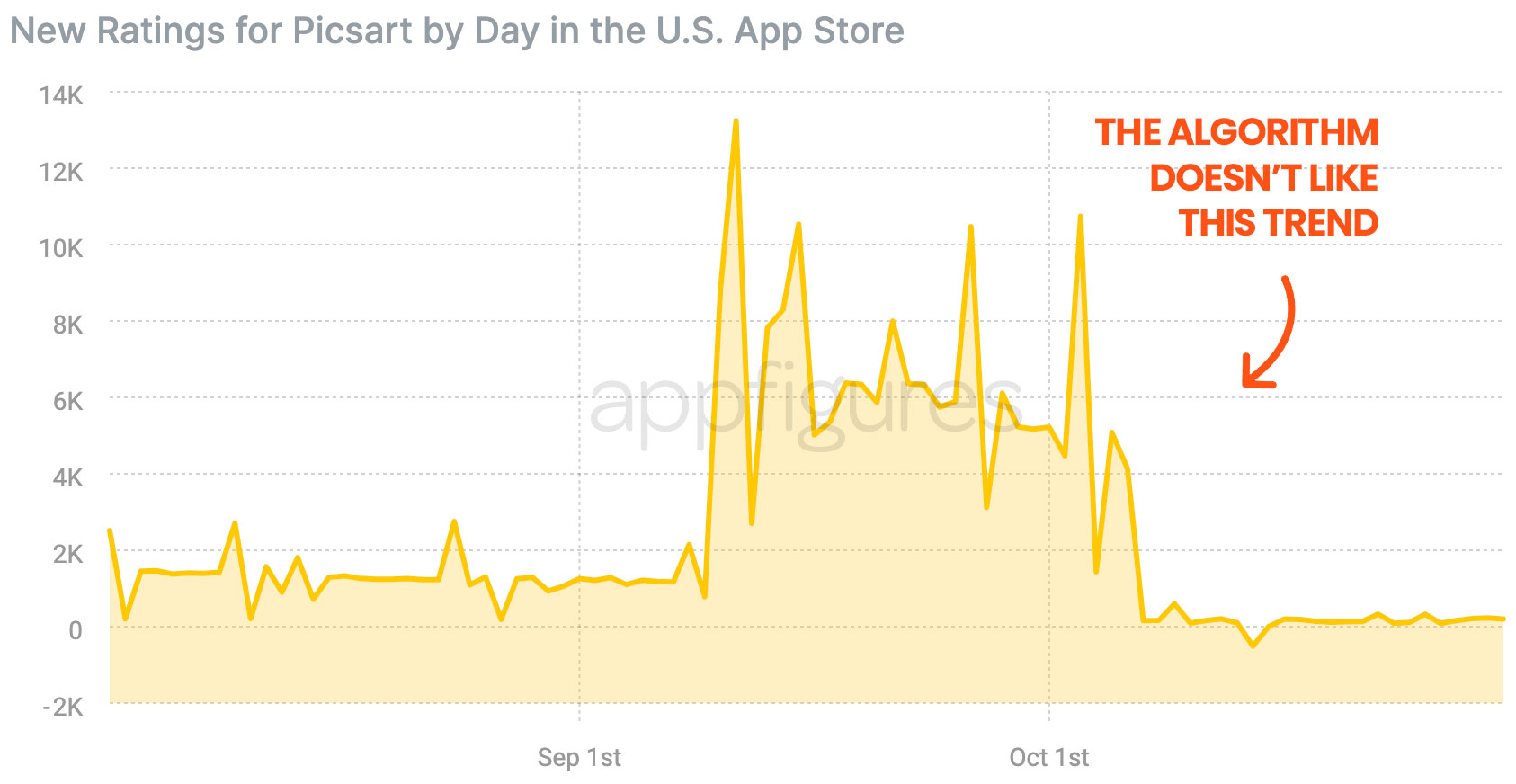 Picsart's ratings were steady after the summer with an average of 250 new ratings per day. It had a nice sprout in September, where the daily count grew to around 1.3K/day, but then dipped to under 50 new ratings per day. Losing the ratings is not great, as is the downward trend itself, which the algorithm is sensitive to.

I'm not sure what's caused this dip but guess it's either a change in strategy for when to ask for a rating that went bad or a bug in the code that asks. This is why it's super important to keep track of your ratings, which is something you can do quickly through the Ratings Report.

So Picsart dipped because it shot itself in the foot, but Facetune and Photo Editor- were ready with proper keywords and by actively getting new ratings. It's not too common to see a competitor mess up like this, but when it happens, you want to be ready, so you can get a quick and big win.

In the #4 spot we have Photoshop Express, which didn't make the cut last time we looked. The app uses the full term right in its name and without any repetition and gets a nice chunk of ratings.

To figure out why Photoshop, which seems to have everything right, isn't the top rank. The answer lies in its ratings trend. Although the app leads in ratings now, it wasn't getting (m)any ratings for most of the summer. Remember, the algorithm cares about trends just as much (if not more) as it cares about absolute numbers. This trend is heavy enough to keep Adobe down right now.

Once enough time has passed, it'll forget, which means that if we revisit this in the future, I fully expect to see it high up. If you're one of its competitors, I'd recommend working on getting more of your users to rate your app. You'll need all the ratings you can get when that happens.

And at #5, we (still) have Magic Eraser, which has the term split between the name and subtitle and does a good job of not repeating anything. The only reason it's not up higher is its new ratings aren't as high as the rest. Moving the term to the name fully won't help that much, but it could. If anything, it'd help in case one of the other competitors messes up.

Where you rank in the App Store is as much about what your competitors are doing as it is about what you are doing. That's why you should always be as optimized as possible. The algorithm learns slow but forgets fast, so it takes a while to build momentum but only a few mistakes to plunge.

Instead of listing out all the best practices, tips, and tricks, you should be aware of, I'll just link to all the Teardowns I've written so far. They're super easy reads, and you really need to see how impactful little changes are.