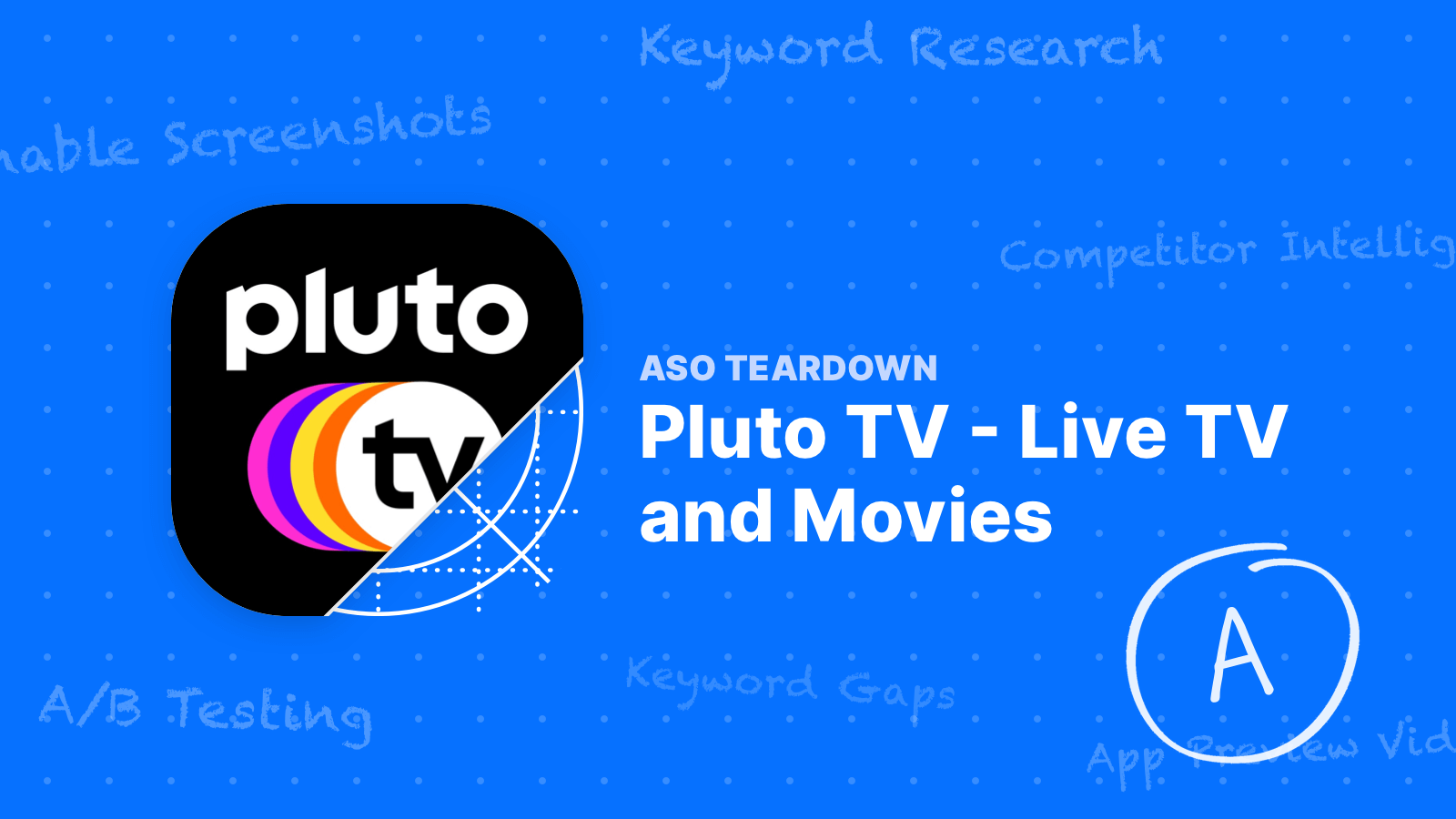 The battle of the streamers isn't just about branding but also about options. These days, where many of us have already binged through the good parts of Netflix more than once, many are visiting the App Store to find more ways to spend time away from our work laptops.

Pluto TV is one such alternative that's trying to compete, and we'll look at how they do that on the App Store in this ASO Teardown.

Overall, Pluto TV earns a A.

Not so good: not enough keyword variety in name and subtitle, screenshots are kind of boring, not using its unique selling proposition right upfront.

Pluto TV by the Numbers

Here's how Pluto TV is performing in the U.S. App Store, based on our Competitor Intelligence:

Growth is Good but Not Great 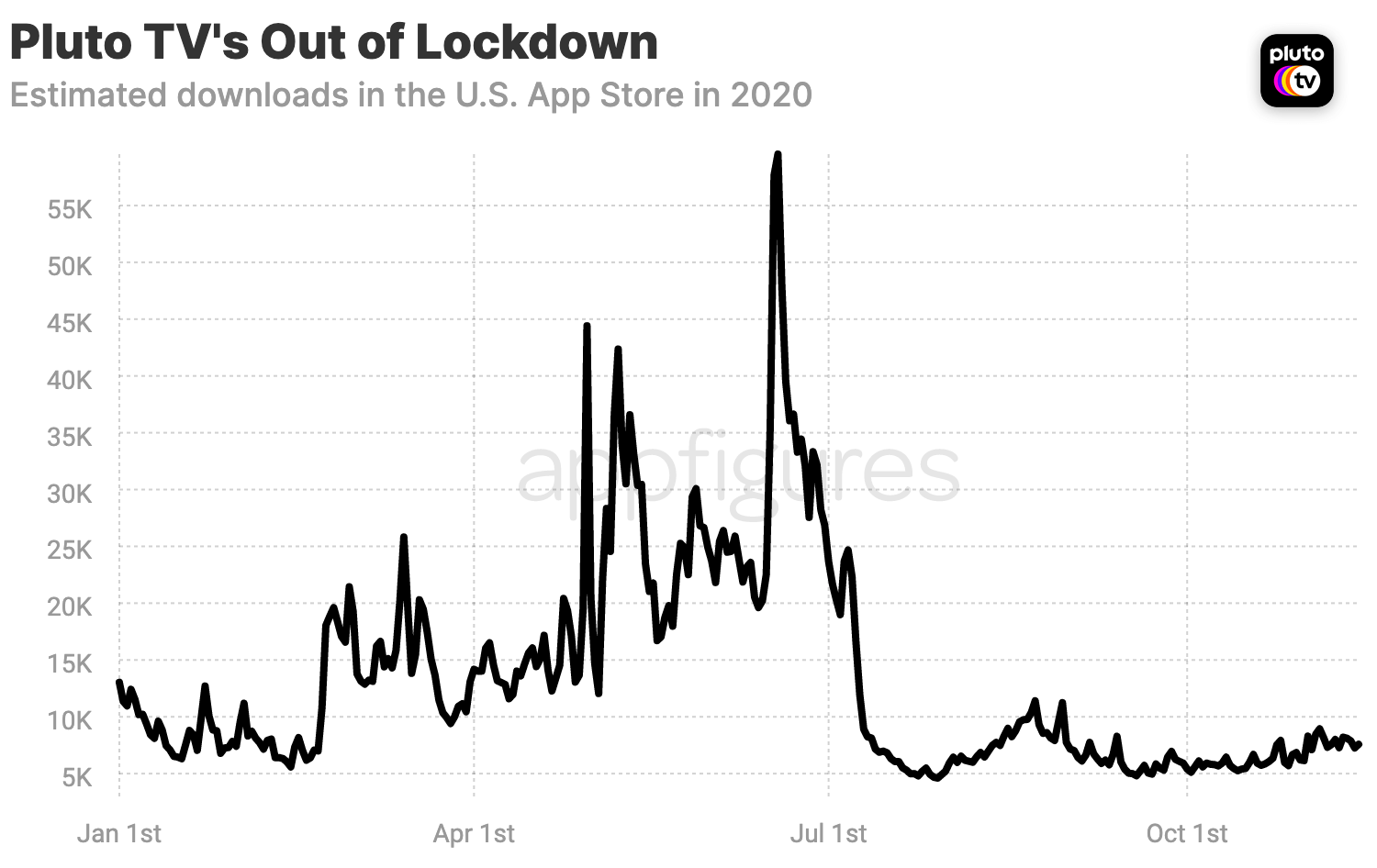 2020 has been a good year for streaming services for the obvious reasons, and Pluto TV is no exception.

Downloads surged just around lockdown time and stayed pretty high until the U.S. "re-opened" over the summer. But, when the dust settled, it settled pretty low for Pluto. Considering it's not a household name like its competitors, these pot-lockdown downloads aren't terrible. It easily beats now-defunct Quibi.

But it's got so much more potential.

Pluto TV Vs. The Competition

Let's have a look at how Pluto TV compares to the heavy-hitters of its category in the U.S.: 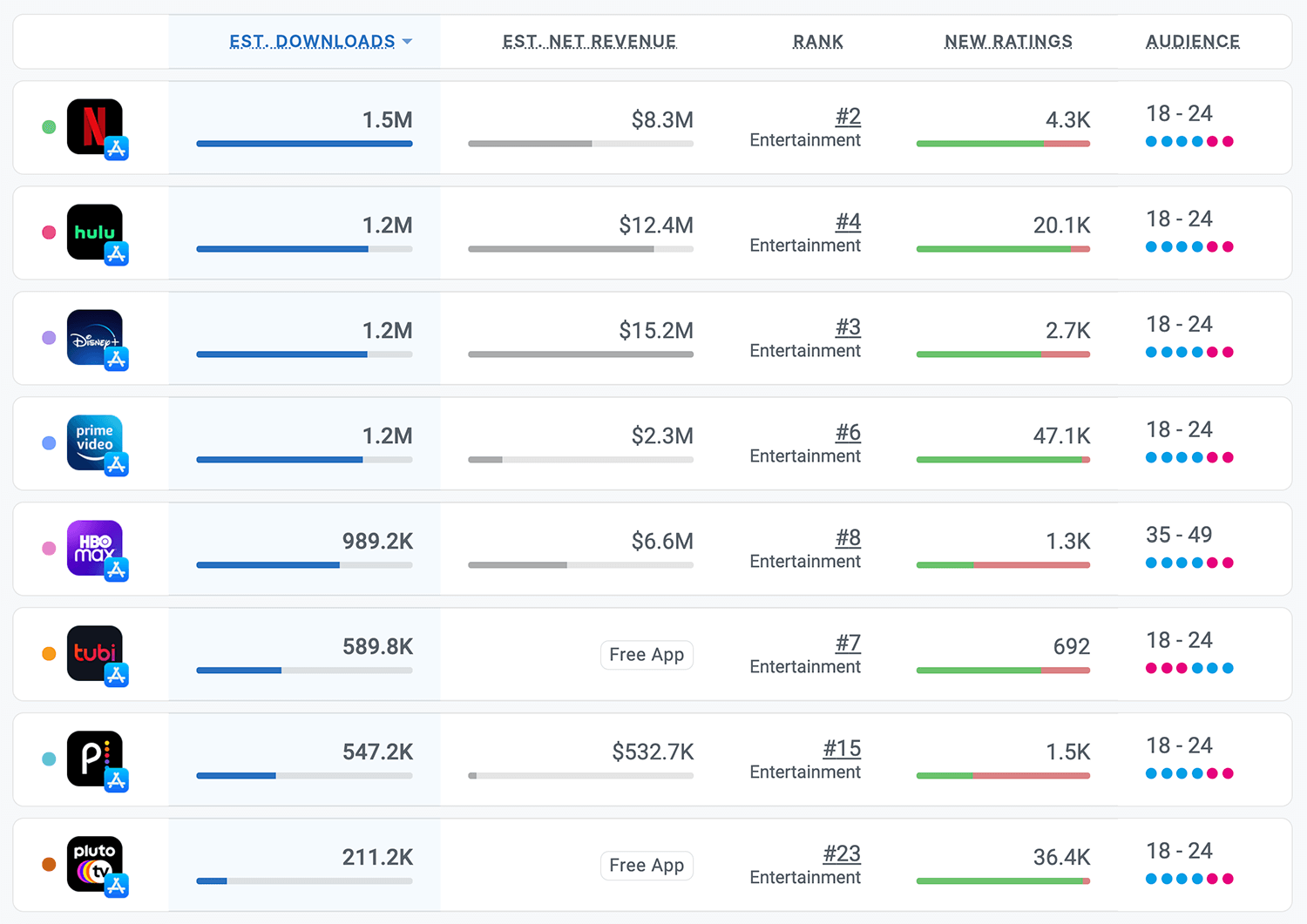 Netflix gets the most downloads, Disney+ makes the most money, but Pluto TV has the highest positive ratings rate and the second-highest number of new ratings. That's certainly going to help with ranks.

If you've used Pluto TV before, you also know it's super easy to use. Download it and start watching it like you would in the old days of cable TV. But that's not all. Unlike its competitors, Pluto TV is free, and I hope they use it wherever possible.

Let's kick off the analysis with the keywords Pluto TV is using in its name and subtitle. Those send the strongest signals to the App Store's algorithm.

There isn't really much there. That's because the keywords Pluto TV chose may look decent but don't generate too many useful combinations. Pluto TV's subtitle is also not very useful from an optimization standpoint. Please don't do this at home.

But... while there aren't too many keywords here, Pluto TV does rank fairly well for what they do have. Ranking 3rd for TV and Live TV is great and looking at the other results, it won't take too much effort to outrank them and dominate these keywords, which have high popularities.

Unlike the name and subtitle, which feel a little like an afterthought, this keyword list is exactly the opposite. Someone actually took some time to think about it. I took a wild guess on that last one, but the rest is very smart.

This list includes alternatives of keywords included in the name and subtitle (tv → television), words related to streaming in general (on and demand), and most important of all, intent-based keywords (cartoon, news, etc.)

Many of these keywords, when combined with others in this list as well as from the name and subtitle, are pretty popular.

Where Else is Pluto TV Ranking?

This combo of name, subtitle, and keyword list gives Pluto TV a bit more than just the name and subtitle alone. Here are some of the highlights: 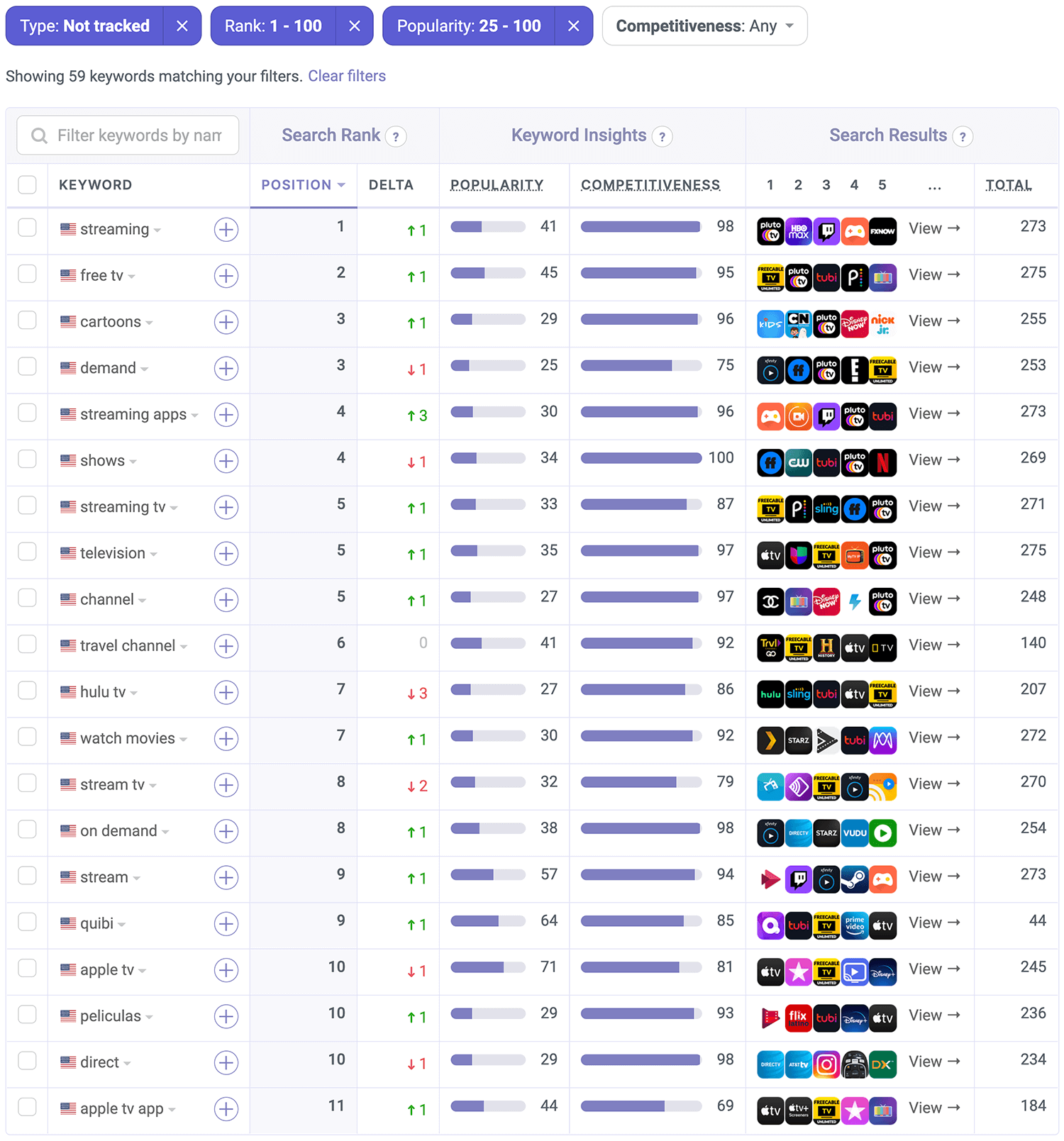 Pluto TV is the #1 streaming app, the #2 free tv app, and #3 cartoon app. That's impressive. What's also nice is that it's ranking for a handful of fairly popular keywords, many of which are not competitor names and are fairly relevant.

I've not been too positive about Pluto TV's ASO so far, but it's starting to look like it's just the name and subtitle that make it look bad, and those could have been set by a corporate decision and not with proper keyword research. I'm not saying it's good, but it means that with just a little bit of effort, Pluto TV can achieve better results.

Pluto TV has a pretty clean set of screenshots, consisting of the app's UI on a dark solid background with light captions in a large enough font. 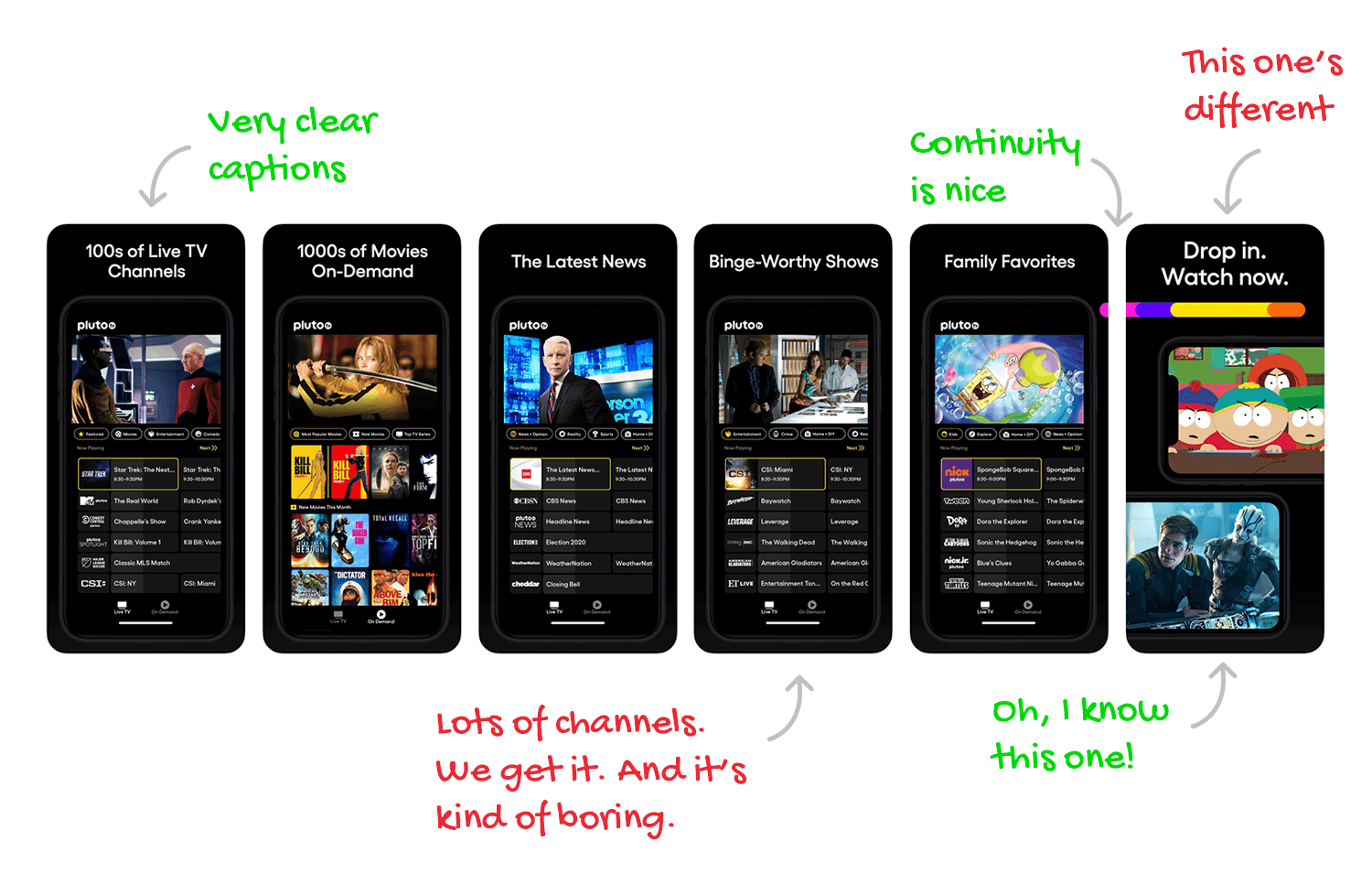 While not the most engaging screenshots, this is a fairly good set. The captions are actionable, tie to keywords, and are succinct. The movies that are highlighted are pretty popular, so most people who see this will likely know at least one of them, and the continuity of color at the end is a nice touch.

But why is the TV guide grid showing in almost every screenshot? It's not very eye-catching to begin with, so repeating it isn't likely to keep the audience engaged. It may not matter if they're only glancing, which is why I don't consider this a sin, just an eye-sore.

No video for a TV and movies app is... par for the course. None of its competitors have one.

I imagine there's a reason other than "Netflix isn't doing one, so we're not" which probably has to do with legal terms relating to content. If that's not the case, this should at least be an A/B test.

The Verdict: A Second Wave of Opportunity

The initial wave of lockdowns gave all streaming services a boost, and with lockdowns now seemingly around the corner, that opportunity might come back as well.

When it comes to optimizing, Pluto TV shows signs of a struggle between branding and optimization, yet has quite a bit of opportunity if it decides to optimize all the way.

The ease of use of Pluto TV is very unique in this space, so I hope to see the team behind it take the second option heading into the winter.