1. The World Cup is Peak Streaming for Sports! Where are They watching? 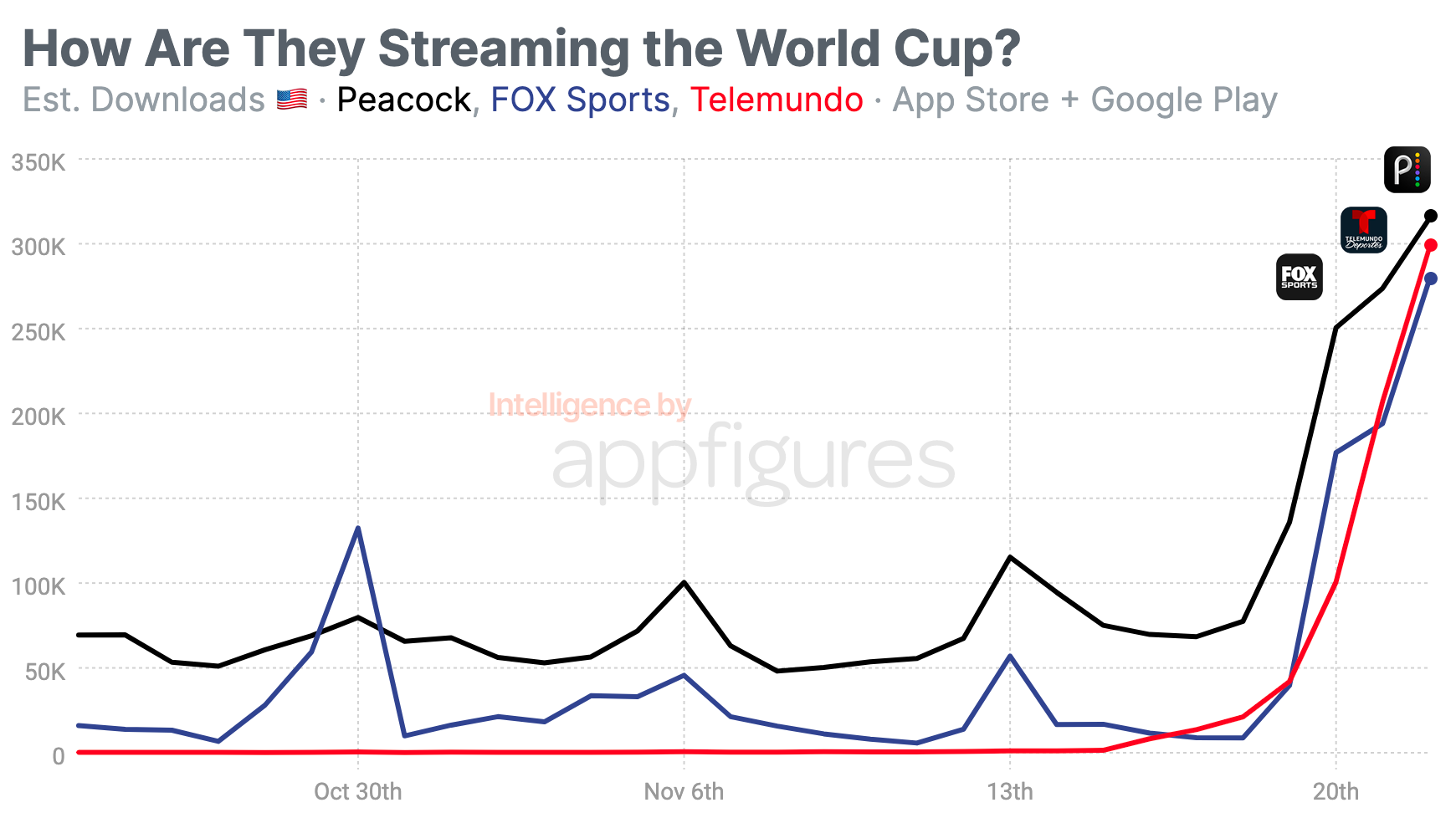 2. Move Aside Mastodon, there's a New Twitter Replacer in Town 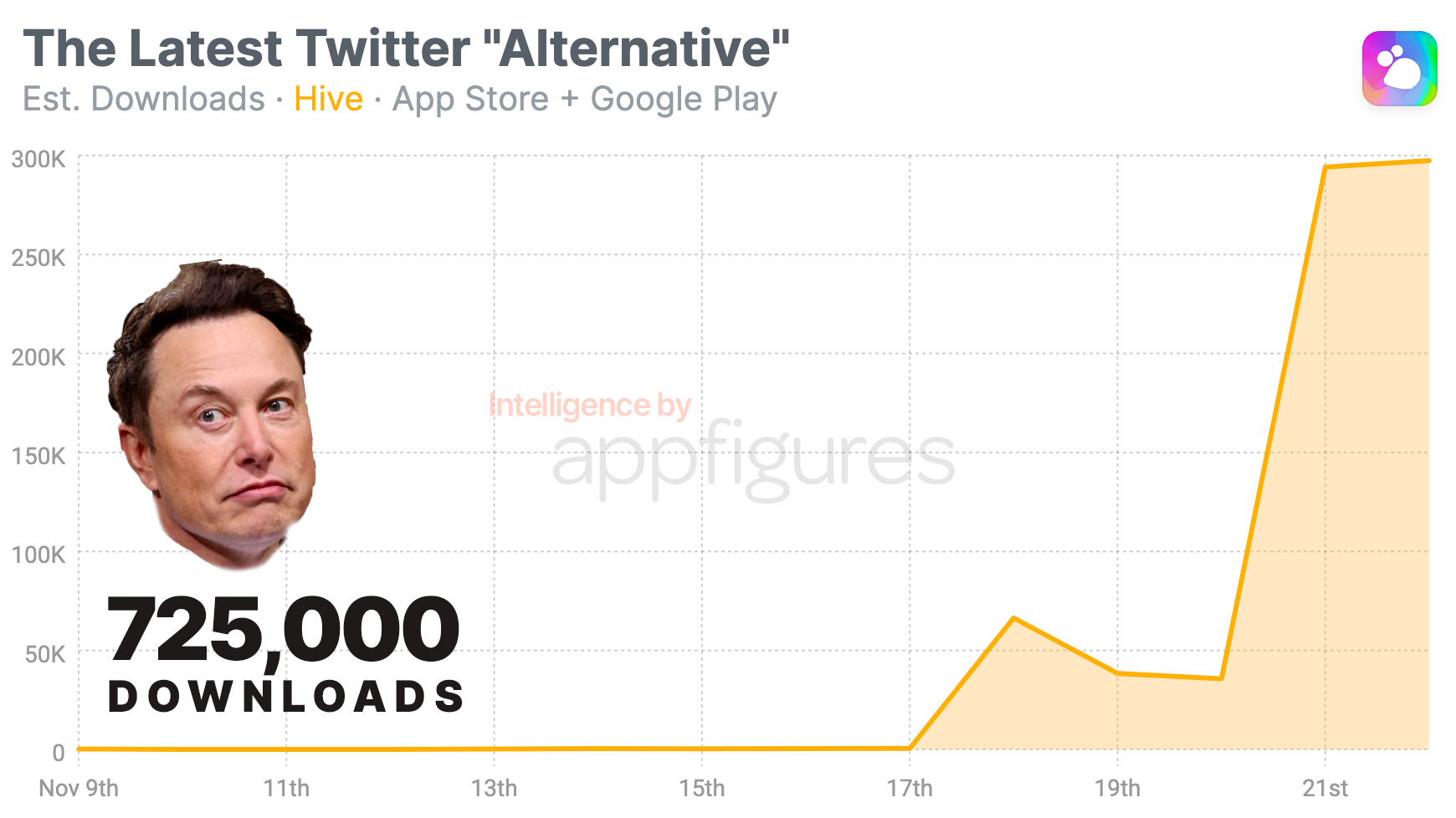 3. Where's Everyone Shopping? The Most Popular Shopping Apps this Holiday Season

The holiday shopping season kickstarted very early this year. What used to start with Black Friday at the end of November started about a month early with Amazon's second Prime Day. Although Prime Day wasn't a big hit, many other apps have started their deals season around that time and some are pushing hard with ads.

I rounded up the numbers and ranked the most downloaded shopping apps in the US since the beginning of November*, and the top result is not Amazon. 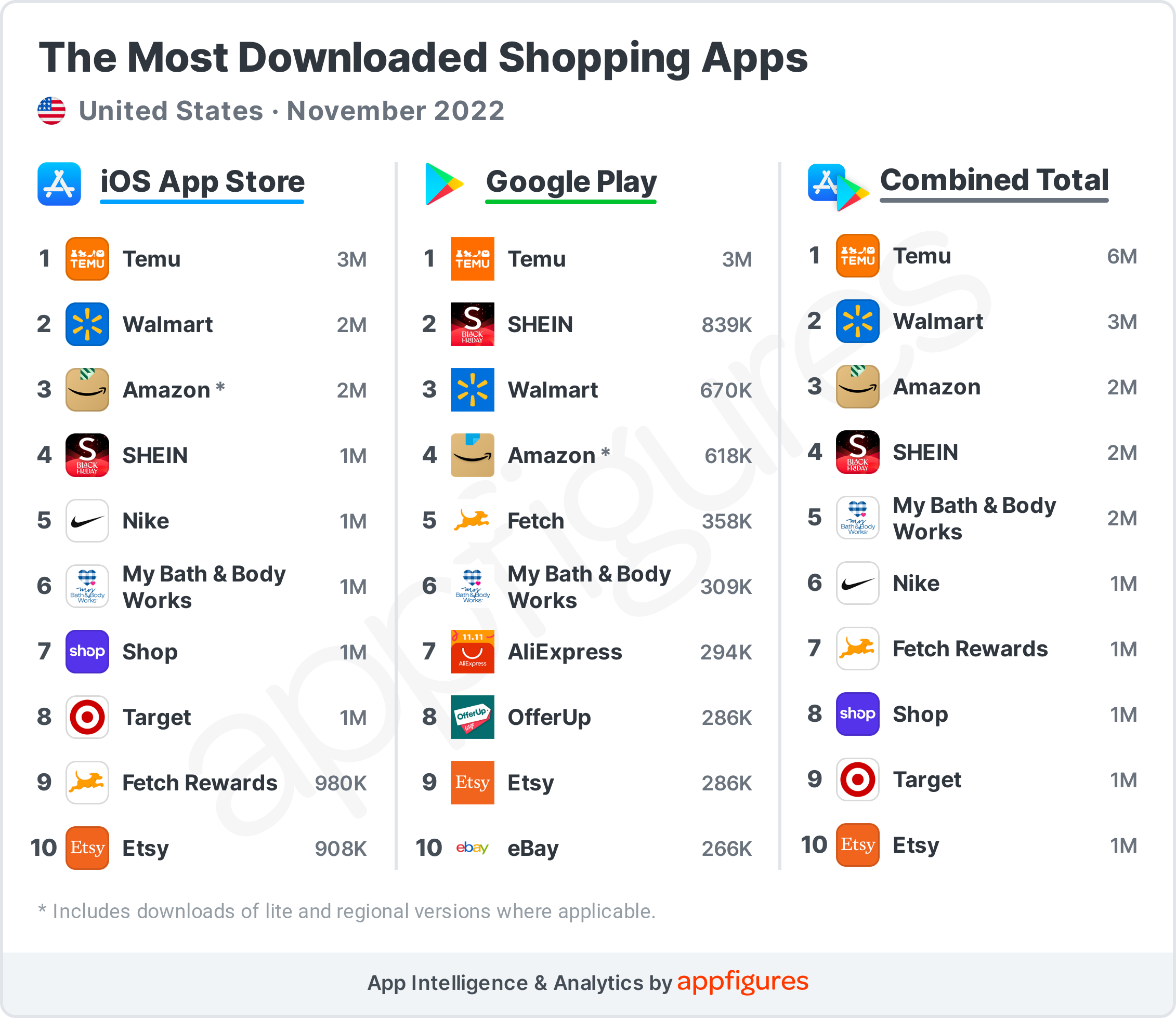 Temu, a new entrant into the shopping race I looked at in Issue #139, was the most downloaded shopping app in the US in November*. Our App Intelligence shows Temu was downloaded by 6 million users, a hefty haul for an app that launched in September. Its unique value is super low prices on lots of things, but its real secret for growth is... Apple Search Ads, which Temu relies on heavily.

Amazon came in 3rd, adding 2 million downloads (after rounding) from the US in November*, according to our estimates. The App Store was responsible for most of those downloads, as to be expected.

SHEIN and Bath & Body Works round out the top 5. Both have seen pretty stable downloads and both saw roughly the same number of downloads even though one has been around for a while and the other is fairly new.

Together, the top 10 most downloaded shopping apps made their way into 21 million devices since the beginning of November* in the US. Much like last year, the shopping season started fairly early, and we can see that by the number of downloads.

Several years ago I spoke with a founder who was passionately convinced that e-commerce will stay on the web and never move in-app. 21 million new downloads in a month tell a different story.

Walmart and Amazon were both ready for battle this holiday shopping season. Amazon thought it'd beat everyone with its second Prime Day event of the year. That didn't exactly work, and while it was planning, Walmart had similar plans. It just started a bit later.

We're seeing the results of Walmart's strategy in this month's downloads -- and they're good! 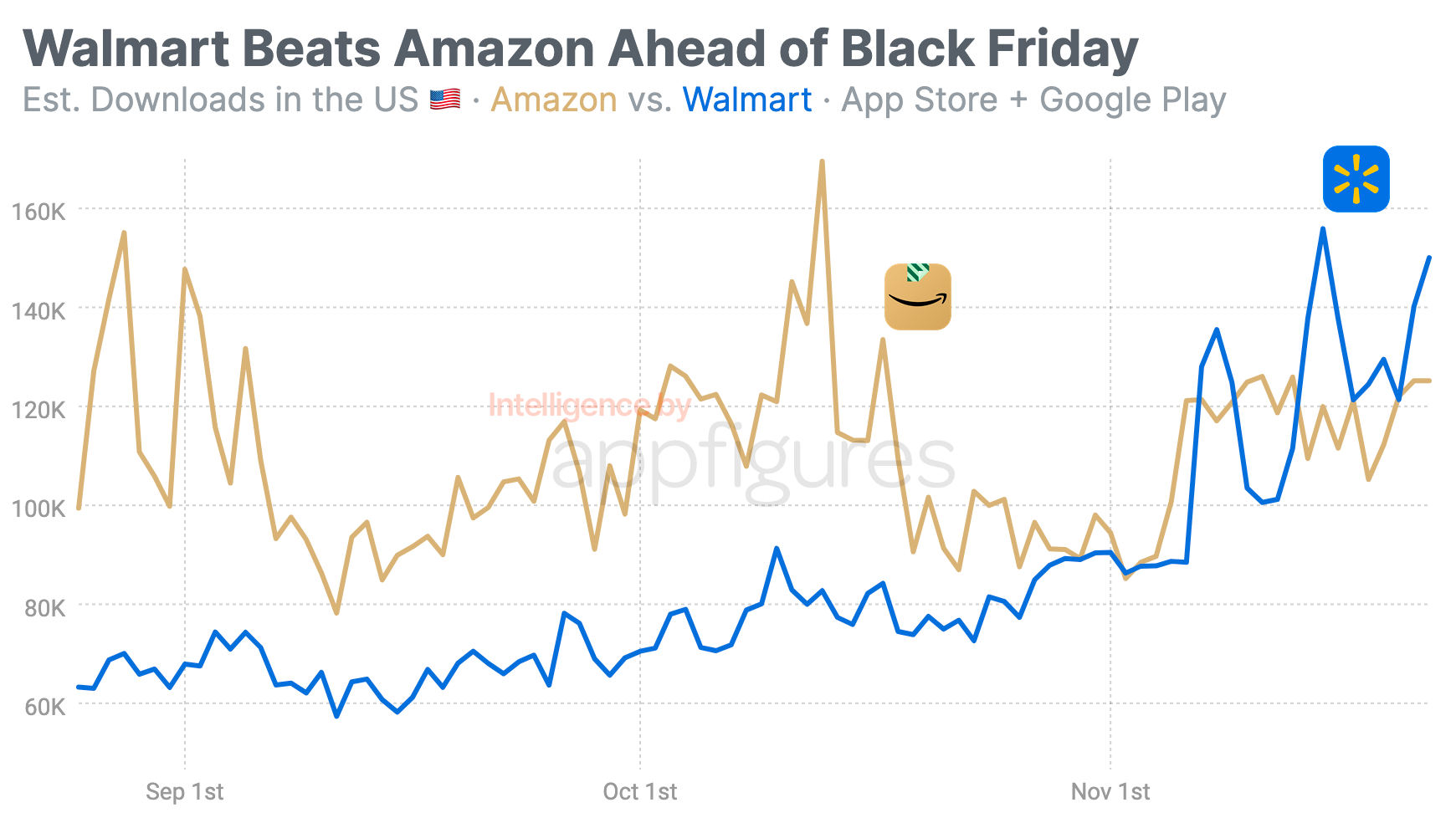 So far in November, Walmart is beating Amazon in downloads on both the App Store and Google Play. Looking at how close the numbers are though, I suspect Walmart is following Amazon's downloads and pushing with ads and promotions as much as needed to beat them.

The trends are interesting! Walmart kicked off November with a big spike, getting ahead of Amazon for the first time in a long time. The trend sloped down right after for a bit, but peaked again a few days later and stayed above since.

In more absolute terms, Amazon added 2.5 million new users in the US between the App Store and Google Play while Walmart added 2.6 million. A small enough difference that's clearly the result of paid UA (aka User Acquisition, aka ads). Considering how much shopping will go through apps this holiday season, this is a good strategy.

I expect to see Walmart's downloads continue to grow as it takes on new entrant Temu, which is currently in the lead.

5. Disenchanted is Disney's Biggest Streaming Hit of the Year!

Disney's Enchanted was a huge success back in 2007, so long ago it was time for a sequel. That happened! Disenchanted, the sequel, was released last week and even though I didn't like it, looking at Disney+'s revenue, on release day, it was a huge success.

In fact, it was the second-highest day of revenue in all of 2022, second to new year's day, which is always big. 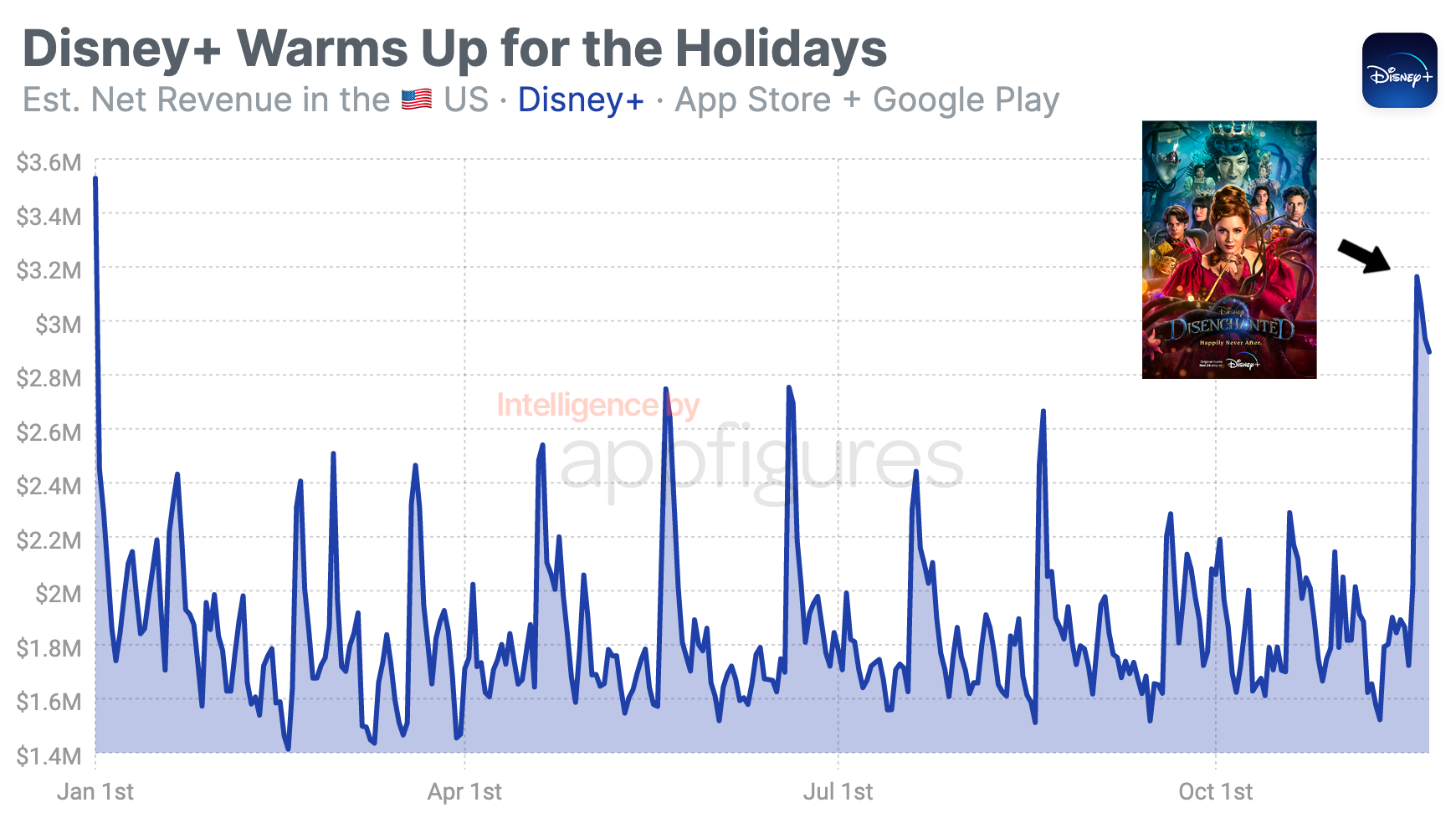 This year, Disney+ averaged $1.9M of net revenue every day. Net meaning what Disney gets to keep after Apple and Google take their fees. The real numbers have a wide range, dipping as low as $1.4M and rising as high as $2.8M. There aren't many 2.8 days though.

Last Saturday, the day Disenchanted came out, revenue rose to $3.2M, according to our estimates. They didn't immediately drop, either. They remained high during the weekend and dropped to $2.9M by Tuesday, still higher than the last peak.

That's great for Disney+ which hasn't had an amazing year of growth in 2022 and recently had a CEO swap. And even though the movie wasn't as good as its predecessor -- according to me + Rotten Tomatoes, which gets it right some of the time -- it's really not relevant here.

What's relevant is the popularity of the Enchanted name, and now that we're entering a different stage of the streaming race, IP will play a major role in getting subscribers and also retaining them. HBO Max does a great job with that and Disney+ can too.