1. How Much Apple & Google Stand to Lose in Korea

In what I want to say is one of the biggest moves made in the app industry as of late, the government of Korea will require app stores to allow developers to use 3rd party payment providers in their apps and games, completely bypassing the native payment mechanisms.

There are a few implications here, from developer revenue to user experience. But... will it actually happen? Let's take a look at what Apple and Google stand to lose if they no longer collect fees from app and game purchases in Korea. 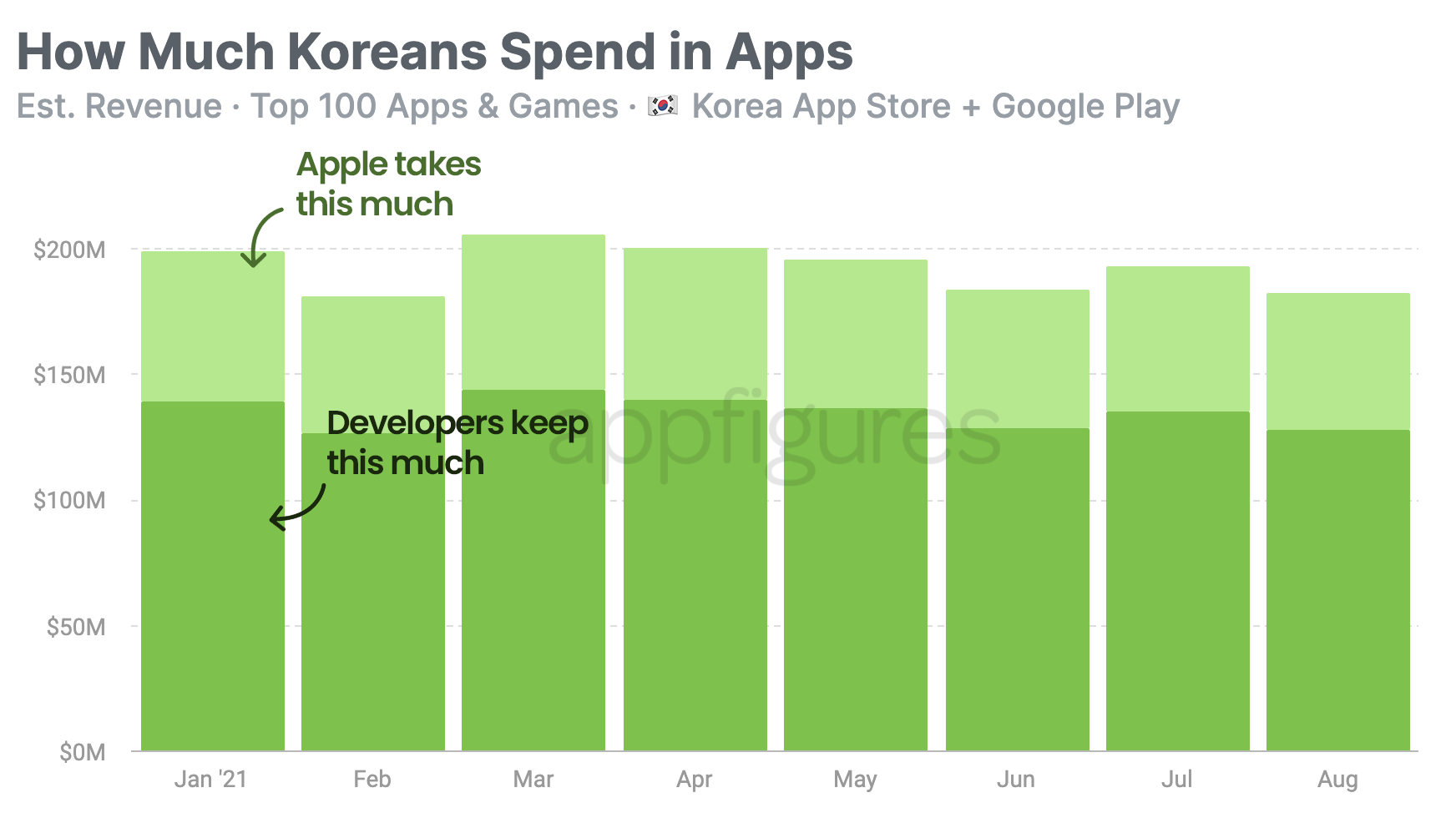 If you're thinking, "how many developers will actually switch?" I'm pretty sure the answer is much closer to everyone than it is to no one. Why? Because if you consider what processing cards cost on the web these days (under 5% per transaction) and compare to the small business tier (15%), the savings are huge.

Let's look at the numbers — So far in 2021, our App Intelligence shows that consumers spent $1.5B on the top 100 apps and games (by revenue) across both stores. All of those developers make more than $1M/yr, so they give Apple and Google 30%, which adds up to about $463M in fees.

That means Apple and Google have at least a half billion-dollars to fight this law. And since that sum is only from the top 100 apps and games, the war chest is likely larger. And that's if they have to break even. They don't, so I expect a very fierce fight to unfold in the coming months.

Fun fact - The law handles stores that continue to operate without allowing 3rd party processors by fining them 3% of their revenue in the country. On that $1.5B, that fine would be just $45M. Muuuch less than what they make in revenue. So I don't see Apple or Google budging. Not for a while.

2. The Biggest Category in the Mac App Store is...

Last week's "revelation" that developers are shipping fewer Mac apps made the rounds and generated a few other questions. Many were curious to see what kind of apps are available on the Mac App Store at all.

Let's have a look at the top categories by total number of apps: 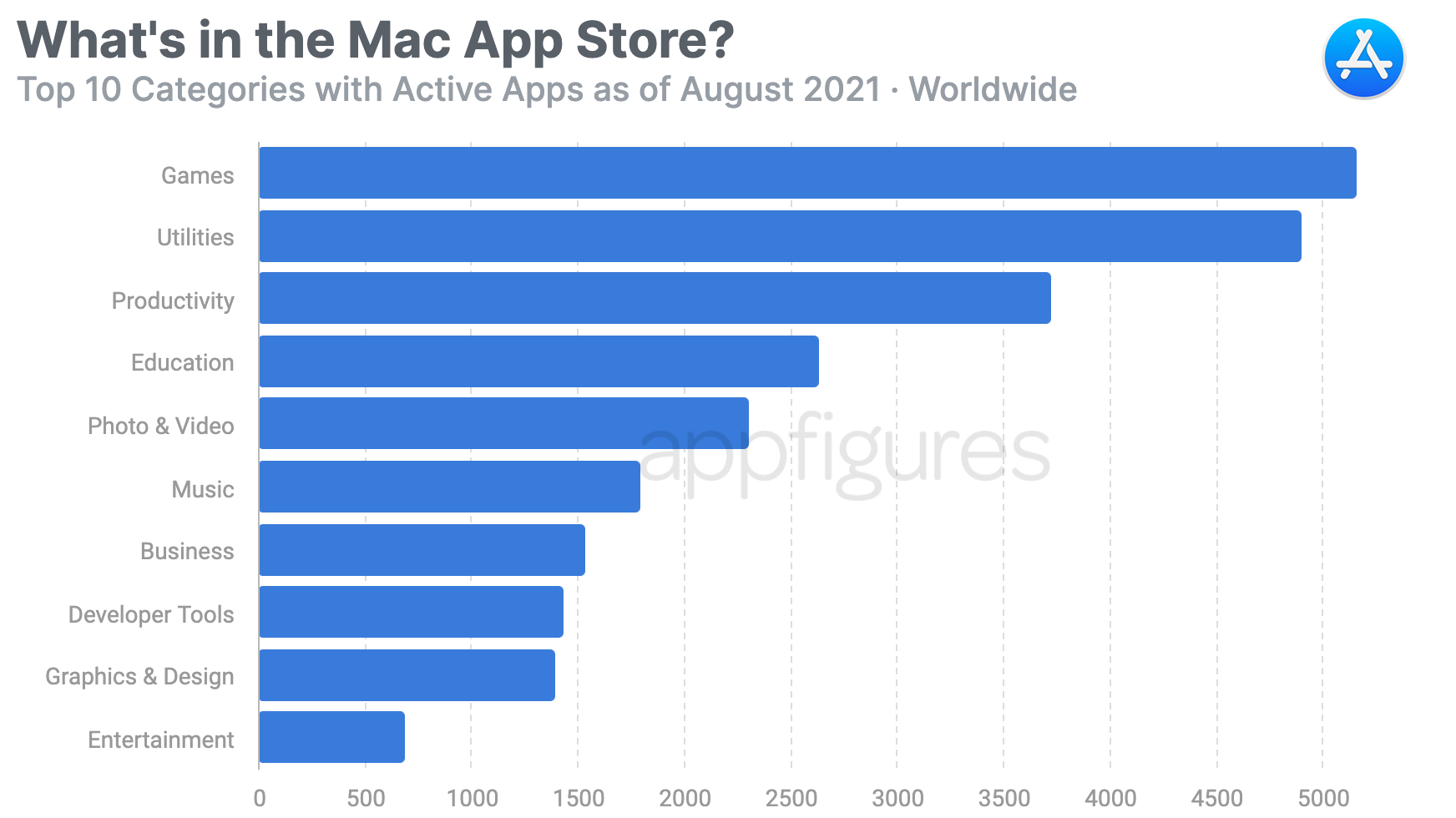 Surprised? I was. If you had asked me which category has the most apps before I compiled this list, I'd have surely said business. Why else would you visit the store? I don't know a single person who downloaded a game from the Mac App Store. But at 5.2K titles, games are the largest category.

Utilities, with 4.9K apps, and Productivity and its 3.7K apps do make sense. People visit the store for things that do things. For that reason, I also understand why the Education category would be busy, and at 2.6K apps, it's somewhat relevant.

The rest, which includes Music and Entertainment, I don't really get. But this is a top list by volume (aka. number of apps) and not revenue. If we were to look at that, I suspect the list would be entirely different.

Bringing this back to my point from last week:

Money for nothing. Lots of developers complain about Apple's 15%/30% fee for the App Store being too high, and while I think there's always room for improvement, the reach the App Store has is massive, and without it, most apps and games that came from nothing would have no chance. That's the App Store for iPhones and iPads, though. The Mac App Store is not the same. At all.

Most Apple users don't download desktop apps from the store. It has many positives (security, simplicity, discovery), sure. But people still don't do it.

My point last week was that without the Mac App Store turning into a download destination, iOS apps on Mac are DOA. With Apple charging developers as much for inclusion in a tiny and irrelevant store as they do for the main attraction (iOS App Store), and because developers can publish apps outside of the Mac App Store, there's really no way to justify being in it.

Which means... The only way iOS apps can take off on Mac is if Apple drastically reduces the fee. I find that unlikely. In a way, maybe that's another reason for Apple to move towards replacing laptops with iPads, where there's no choice...

TikTok's U.S. revenue jumped to its highest single-day figure last week. And not by a little.

It grew 50% from its last highest peak (in early August), 3x what it was back in January of this year, and a whopping 6x from January of 2020. 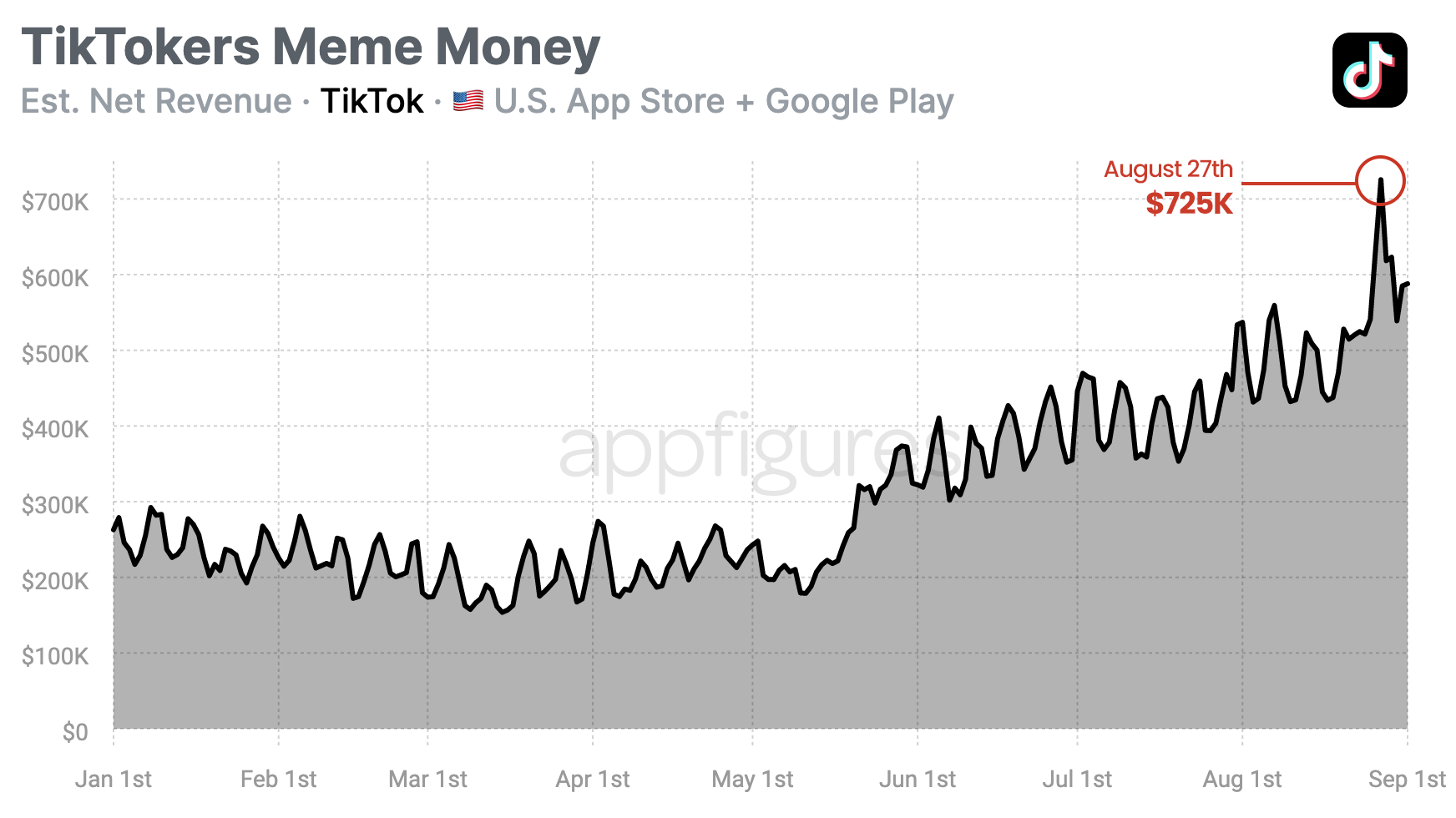 It took me a bit to uncover this one, but the source of the commotion, which led to this revenue explosion, is a meme that no one really knows the origins of but seems to have taken over TikTok. That member is all about August 27th. Insider covered it in more detail.

I'm still not sure what it's all about, but I do know the numbers. Net revenue in the U.S. reached $725K last Friday, 8/27, the most revenue TikTok has seen in a single day.

What's the big deal? TikTok gets a lot of money, how's that news? Well, it's not about the specific figures but rather about the sheer power TikTok's userbase has. We've seen it causing big waves for apps that get caught by influencers and its impact on creators. With this spike, we can also see how easy it is to mobilize this userbase.

There's more we can read into in that last sentence that would take a whole separate article to dig into, but even without doing that, it's pretty clear that TikTok is now the trend maker.

You know how I've been saying the world is shifting to start in-app? This week I have another example of that for you from fast-food giant McDonald's, who saw downloads of its Happy Meal skyrocket. 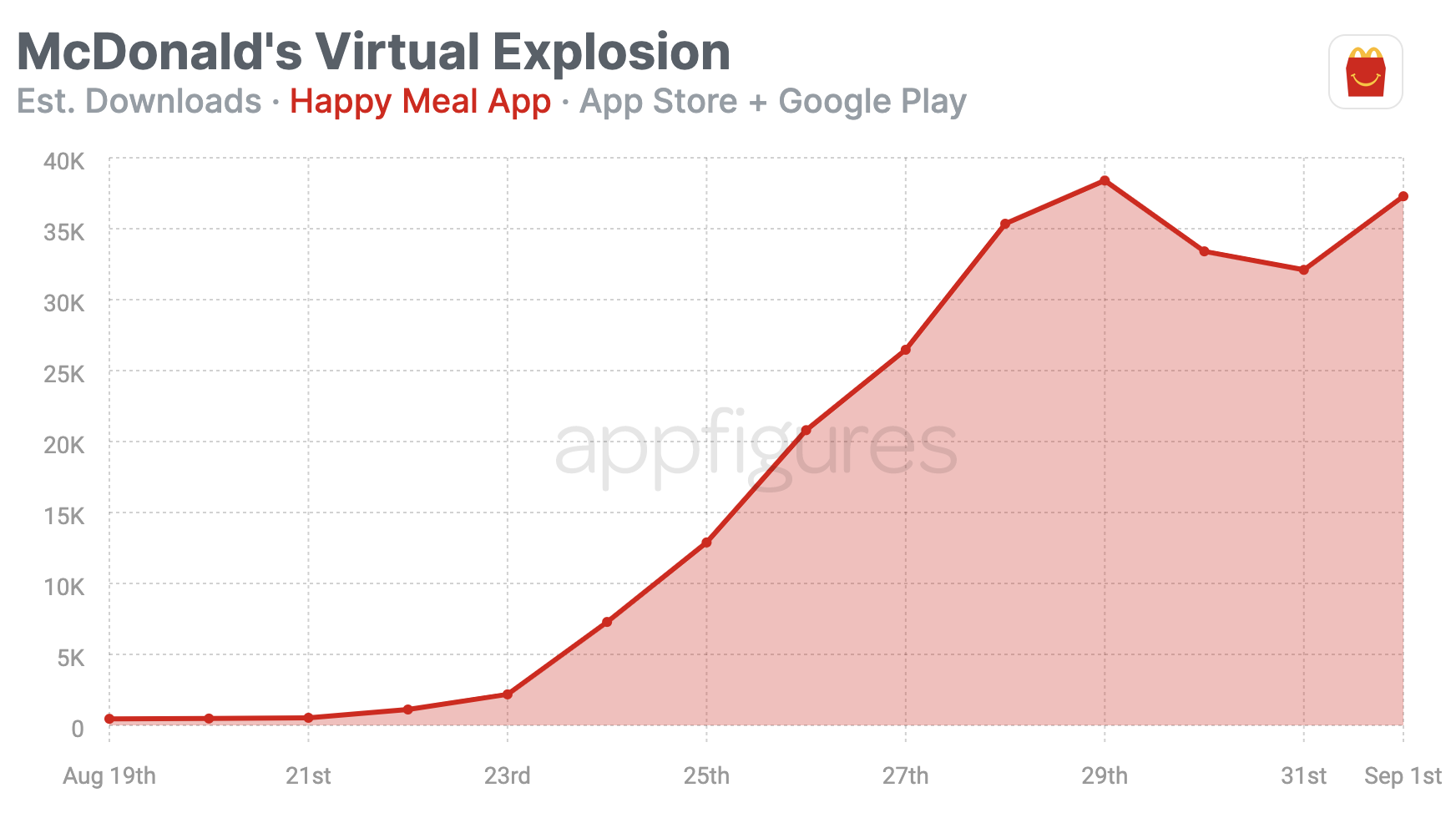 In case you haven't seen it yet, the Happy Meal app is a collection of games that interact with Happy Meal toys. Considering everything is moving in-app, this move makes a ton of sense. The "new world" is no longer IRL which takes away a lot of the engagement power restaurants have.

Downloads of the app, which was released back in 2013 but didn't get much promotion until now, grew 75x (yup!) to a peak of 38K downloads in a single day (last Sunday) and have kept up for much of the week.

According to our estimates, since the end of August, downloads have added up to 250K. For context, that's more than half of the total downloads the app saw in all of 2020.

McDonald's isn't the first to turn to mobile games as its way of staying relevant. Peloton, Louis Vuitton, and even Netflix are jumping head-first into one of the most competitive areas of mobile and bring their hefty war chests with them.

Will McDonald's get a good return out of this? I think so. With nothing else to do IRL, mobile devices are the main source of entertainment for many kids. Combine that with McDonald's ability to bridge IRL with in-app experiences through its many locations and promotions, and you have what history books may call "evolutionary". Let's see how the king reacts...

Last week China announced a new set of laws that aim to detach kids from the claws of technology by limiting the amount of time they can play video games.

Kids (under 18) are now only allowed to play video games for 3 hours a week. That's not even it. They can only play during the weekend and holidays, and only during certain hours of the day.

Much like my take on the laws in Korea, this has many implications. One of those is a shift in how games monetize.

Specifically, I expect to see more games switch to a subscription model in China. Let me explain. 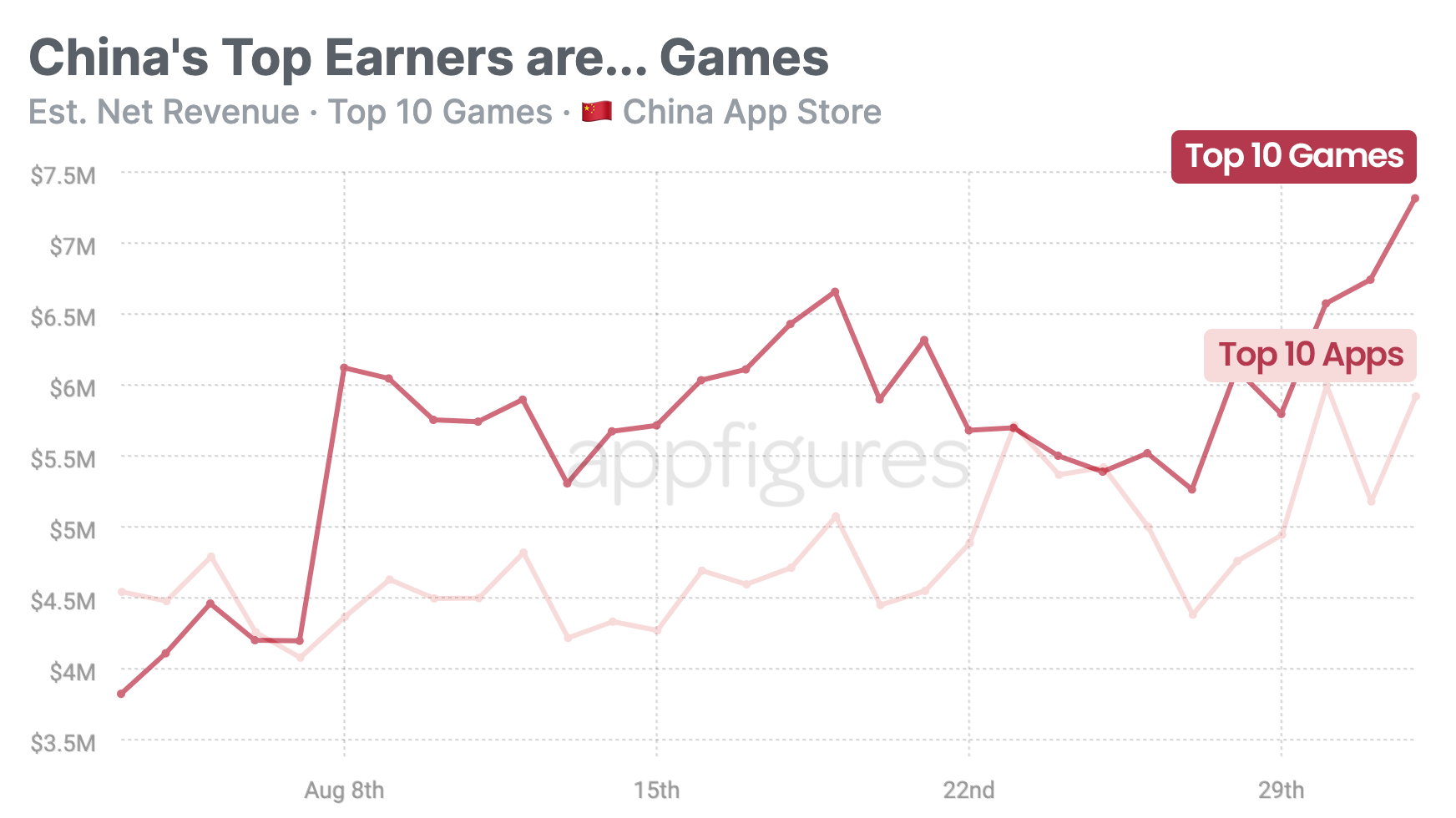 If fewer people play games, there will be fewer opportunities to spend money in-game. Most games monetize with consumable in-app purchases, which will now take longer to "consume". Limiting the potential of in-app purchases will mean revenue for many games will become less stable and more unpredictable. Two words founders and investors hate.

Also, two things that subscriptions solve. The total might end up being lower because there's a reasonable limit to what people will pay on a recurring basis considering they'll only be able to enjoy it for a very short amount of time, but it will make for a predictable and stable revenue stream.

Looking purely at numbers, the top 10 games in the Chinese App Store earned $170M (that's USD) of net revenue in August, according to our estimates. The top 10 apps, which include two entries from TikTok, got close, with $143M of net revenue in the same period.

Now, this total isn't just from games, so the impact may not be as drastic as fast. But... over time, there will be a shift to play fewer games—probably what the Chinese government is hoping for as well—which will have an impact.

We've seen a massive shift towards subscriptions from apps over the last few years (which is why we're constantly working to improve our subscription analytics for developers) so people are already primed to accept this type of monetization. Primed != will, so how this evolves is going to be very interesting.

The insights in this report come from our proprietary, high-quality app intelligence. App makers, marketers, banks, investors, and journalists all over the world rely on our intelligence every day. Get it →