1. When Facebook Went Down Telegram Went Up. Waaay Up!

Facebook's fleet went down this week for a few hours. As surreal as that may sound, one's misfortune is another's fortune, and this one is Telegram, the messaging app that's competing with WhatsApp.

On Monday, as all of Facebook, WhatsApp and Instagram were down hard for some unknown reason, the world didn't end. In fact, everything that isn't Facebook got a lot of traffic. The biggest winner on the App Store was Telegram, which jumped to the top of the App Store by the evening. 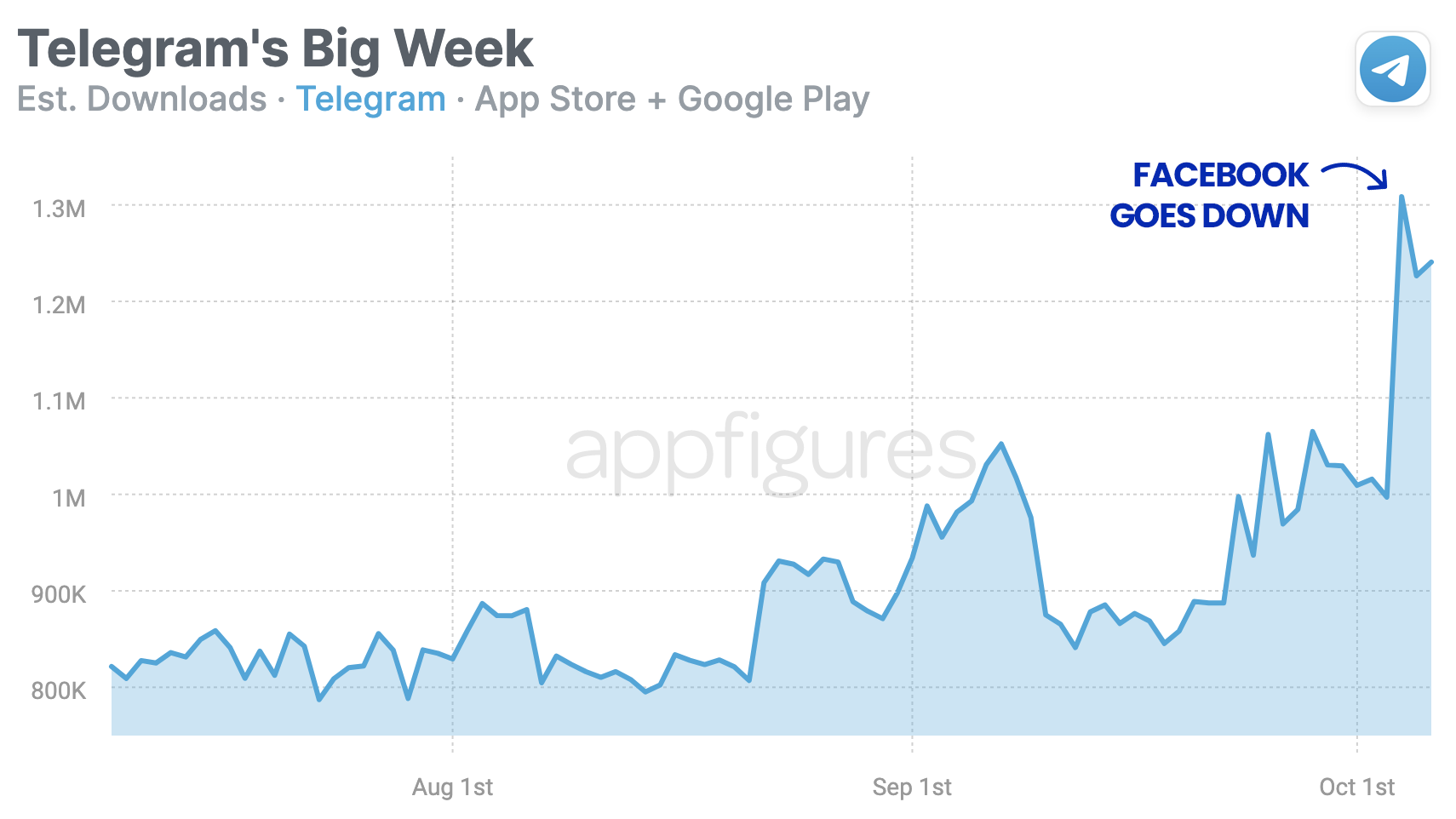 Telegram's downloads topped 1.3M on Monday, a 52% over the average of the previous three Mondays. It was dethroned by Netflix (for a hot moment) and then TikTok by Tuesday, but after news of this surge spread, it rose to the top, again, late Wednesday.

Unforced error. WhatsApp's dominance, which can be described as "very strong", has been weakened this year. The thing is, it wasn't competitors or changing market conditions, which are usually to blame, but rather by its own doing.

Earlier this year, Facebook made a very confusing statement in which it suggested it'll start reading all messages on the service. Backlash was immediate, and while Facebook's PR was fumbling, Telegram and Signal were seeing millions of new users.

Mario Kart Tour turned two a few weeks ago, prompting me to take a look at how it's been doing. 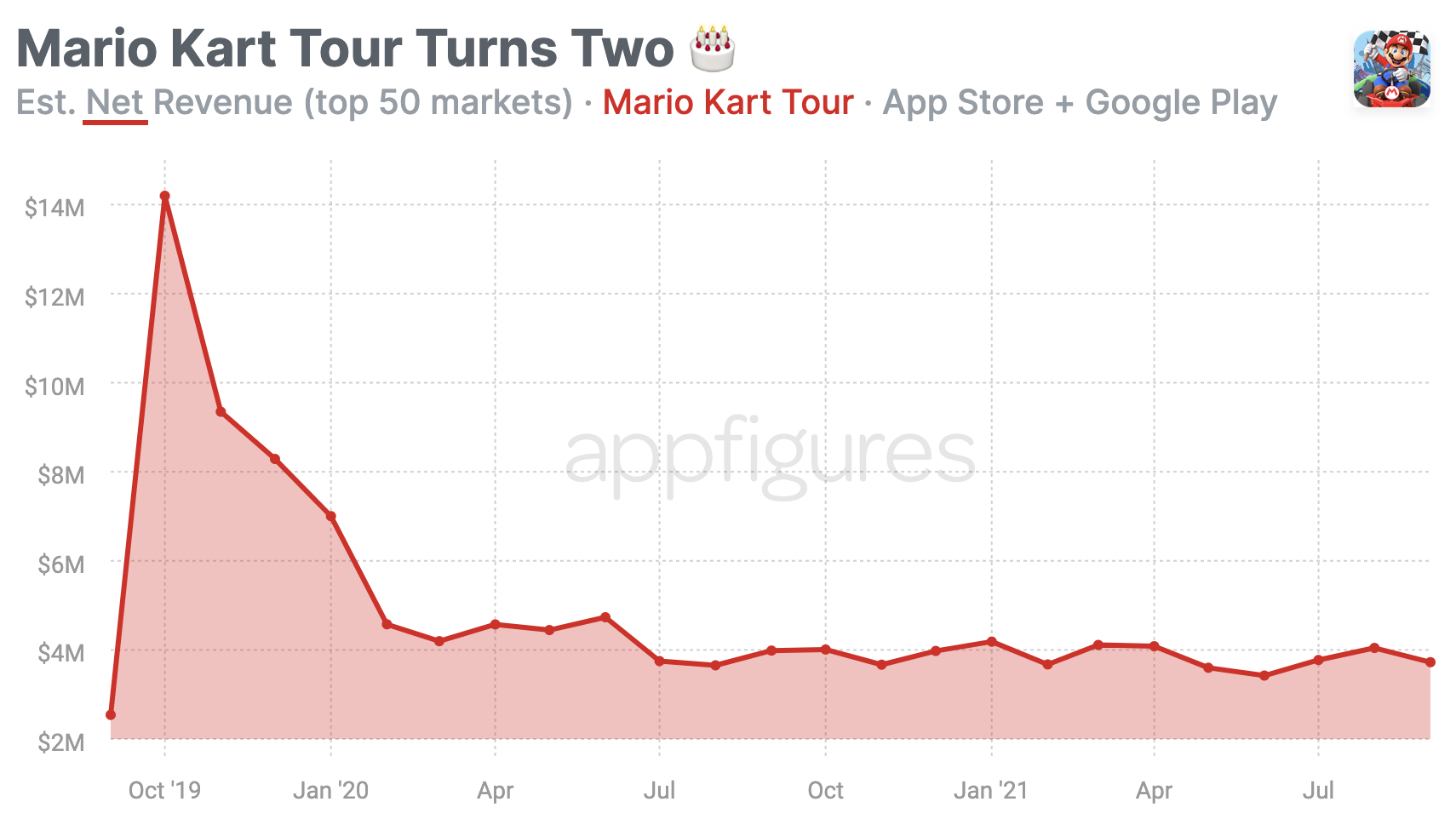 Our estimates show that since it was launched at the end of 2019, Mario Kart Tour was downloaded a little over 100M times across the App Store and Google Play worldwide. A little more than half of those downloads came in the first four months. The U.S., Mexico, Brazil, and Japan were the top countries and accounted for roughly 45% of all downloads.

Downloads have since leveled off and are now averaging a modest 2M new downloads per month, according to our estimates.

Our estimates show that roughly 37% of the title's $120M in net revenue since launch came in the first four months. It's leveled off and has since leveled off, averaging around $4M of net monthly revenue.

Is that a lot of money? Not really. There's so much brand behind the red plumber that you'd expect it to skyrocket its way to the top of the charts, and that wasn't and still isn't the case. Most top-grossing games you'll see in the App Store earned more than that in the last year alone. I hope Nintendo can figure out what it's doing wrong because I'd much rather play its game than the hyper-casuals that plague the stores these days.

Houseparty, the "face-to-face social network" that blew up during lockdowns last year, is now officially dead. Last month Epic (yup, that Epic) announced it was shutting down the service immediately, and poof, it was gone.

This raises a few interesting questions, and my main one is why would Epic shut down a service that got so popular Apple "stole" its features?

Before we answer that, let's look at Houseparty's ride and how we ended up where we are today. 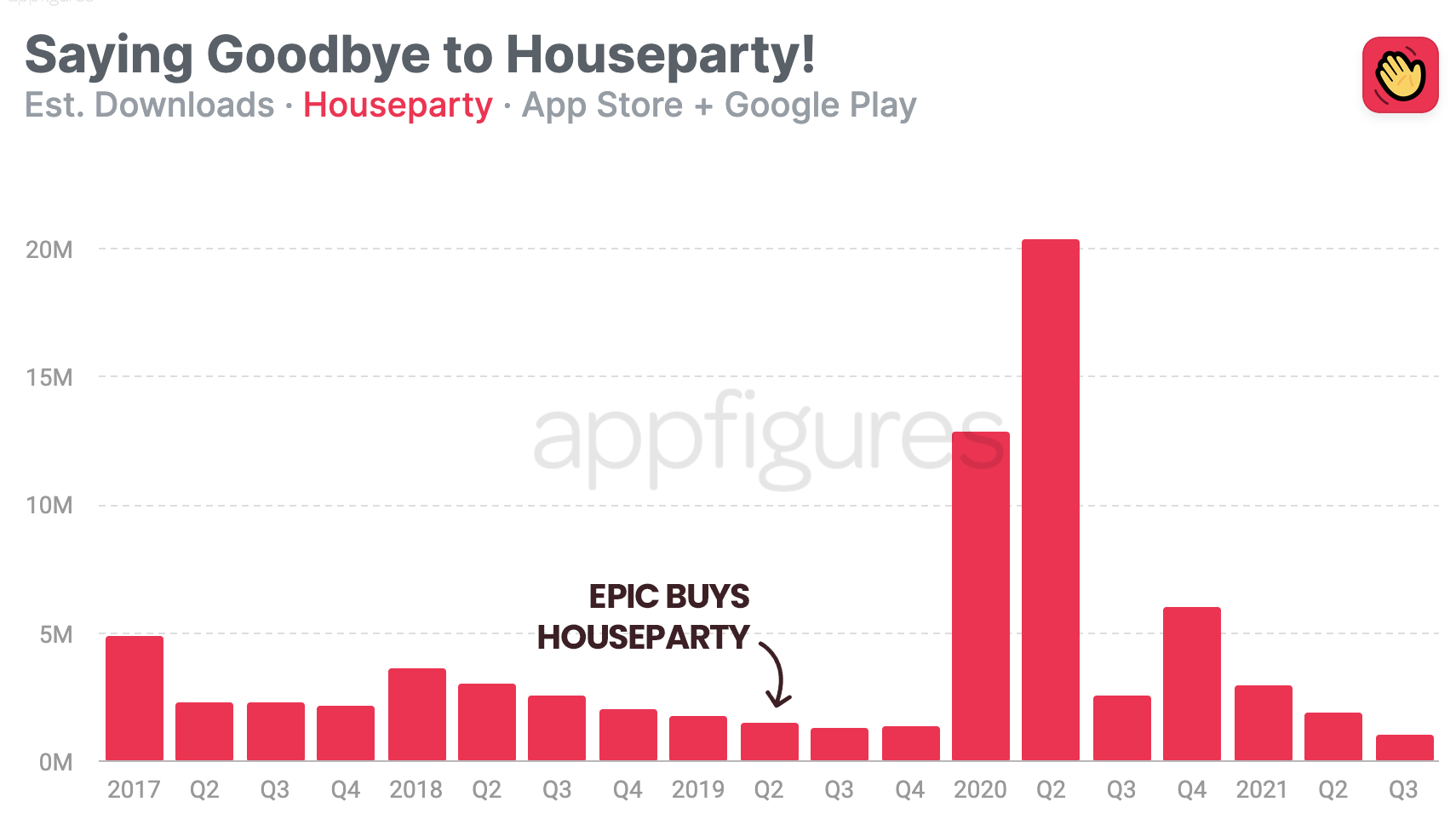 Since 2017, Houseparty made its way into more than 77M mobile devices worldwide across the App Store and Google Play, according to our app intelligence. The U.S. accounted for nearly half of all downloads, followed by the U.K., Germany, India, and Canada.

Looking at the trend, however, tells us a slightly different story.

Although Houseparty was popular pre-pandemic, its growth was negative. Between Q1 of 2018 and Q4 of 2019, Houseparty's downloads were down more than 50%. That's when Epic acquired it.

It's all about the metaverse... With excitement for face-to-face interactions waning and Epic going all-in on the metaverse, there's no longer place for a standalone video app in Epic's arsenal. Going virtual is a big bet for Epic, but likely (and unfortunately) the correct one considering where the world is heading right now.

I usually focus on trends in apps and games, but once in a while, a service provider makes a move I see as pivotal, and have to bring it up. This week it was Twitter selling its mobile ads platform MoPub to AppLovin, which went public and acquired an attribution network this year.

Twitter getting out of the services business isn't new. A few years ago, they sold Fabric, a mobile usage analytics platform Twitter has been running since 2014, to Google. Unlike Fabric, however, MoPub is generating hundreds of millions in revenue.

Comparing the sale price to the revenue gives MoPub a sad valuation and really shows how much Twitter wanted the platform gone. But one's loss is another's gain. 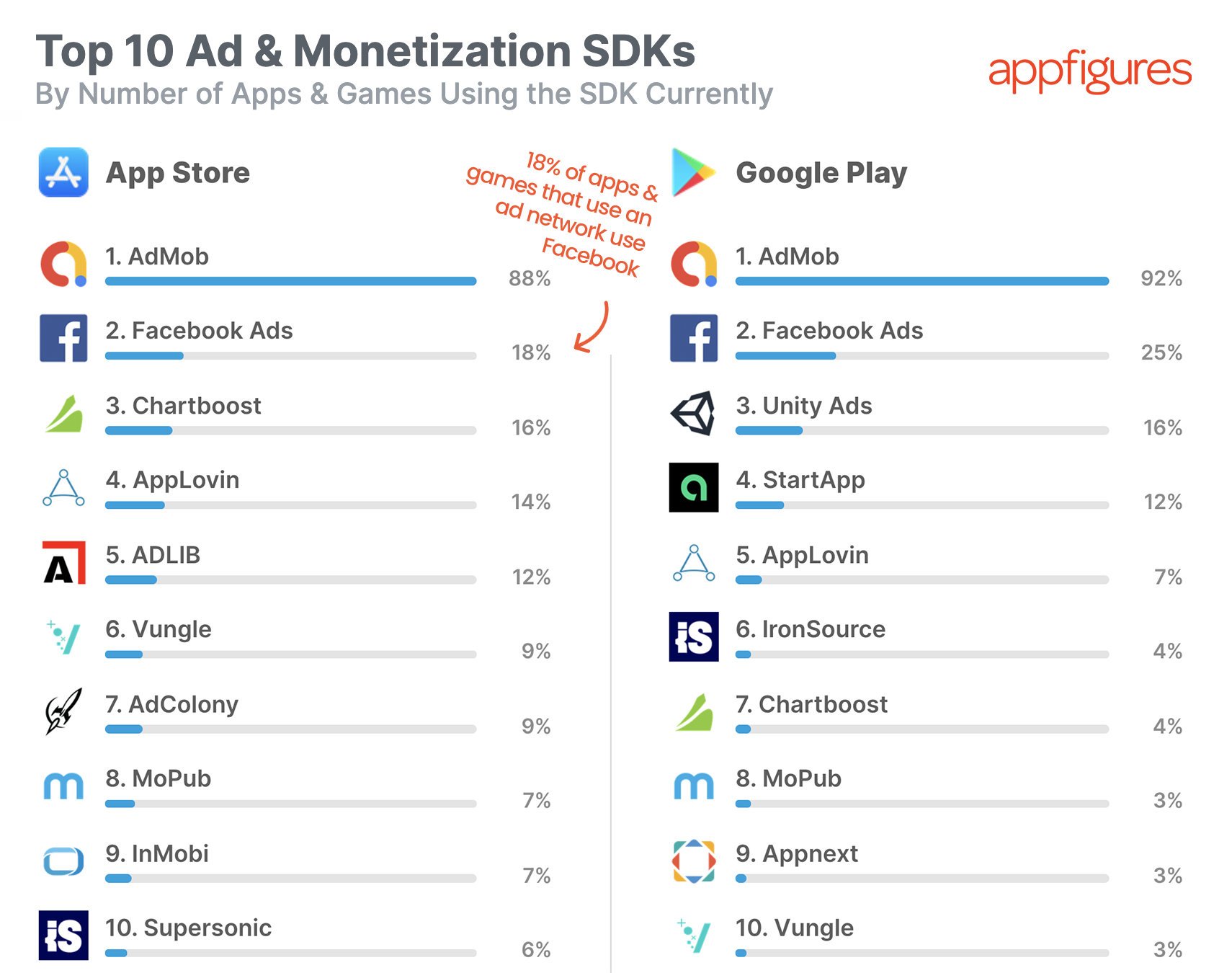 The winner here is AppLovin, who's growing in a fashion that should scare ad king Facebook. Why? Sheer scale.

Based on our SDK Intelligence, AppLovin is the #4 most installed ad SDK across iOS apps and games and 5th among Android apps. MoPub is 8th across both groups.

Once joined, AppLovin's network will eclipse that of Facebook among iOS apps and games by about 30%. Across Android apps and games, where Facebook's network is much larger (by an order of magnitude), AppLovin's acquisition will put a small but mainly unnoticeable dent in Facebook's dominance, leaving it in 2nd place, comfortably.

Android is where the real game is for ad providers right now, "thanks" to Apple's App Tracking Transparency update, which made life much harder for everything ad-related in the App Store.

On Google Play, AppLovin will maintain its 5th place after MoPub is absorbed, and faces strong competition from Unity's ad network and StartApp, which rank 3rd and 4th.

Wait, what about Google ads? I purposely left those out because Google's reach is so much wider than any other ad network, and by a lot. No one's challenging them any time soon...

When you're stuck at home all day, you start to see all the things you said you'd fix or improve. And after you stare at those for enough time, you want to start doing them. That's why Home Depot and Lowes, the two places you'd go-to for that sort of stuff, have had a very busy lockdown season that's still going strong.

But! While trips to the hardware store are fun, the Home Depot and Lowes discovered that selling via a tiny screen can be as good as selling in a huge warehouse-like store. 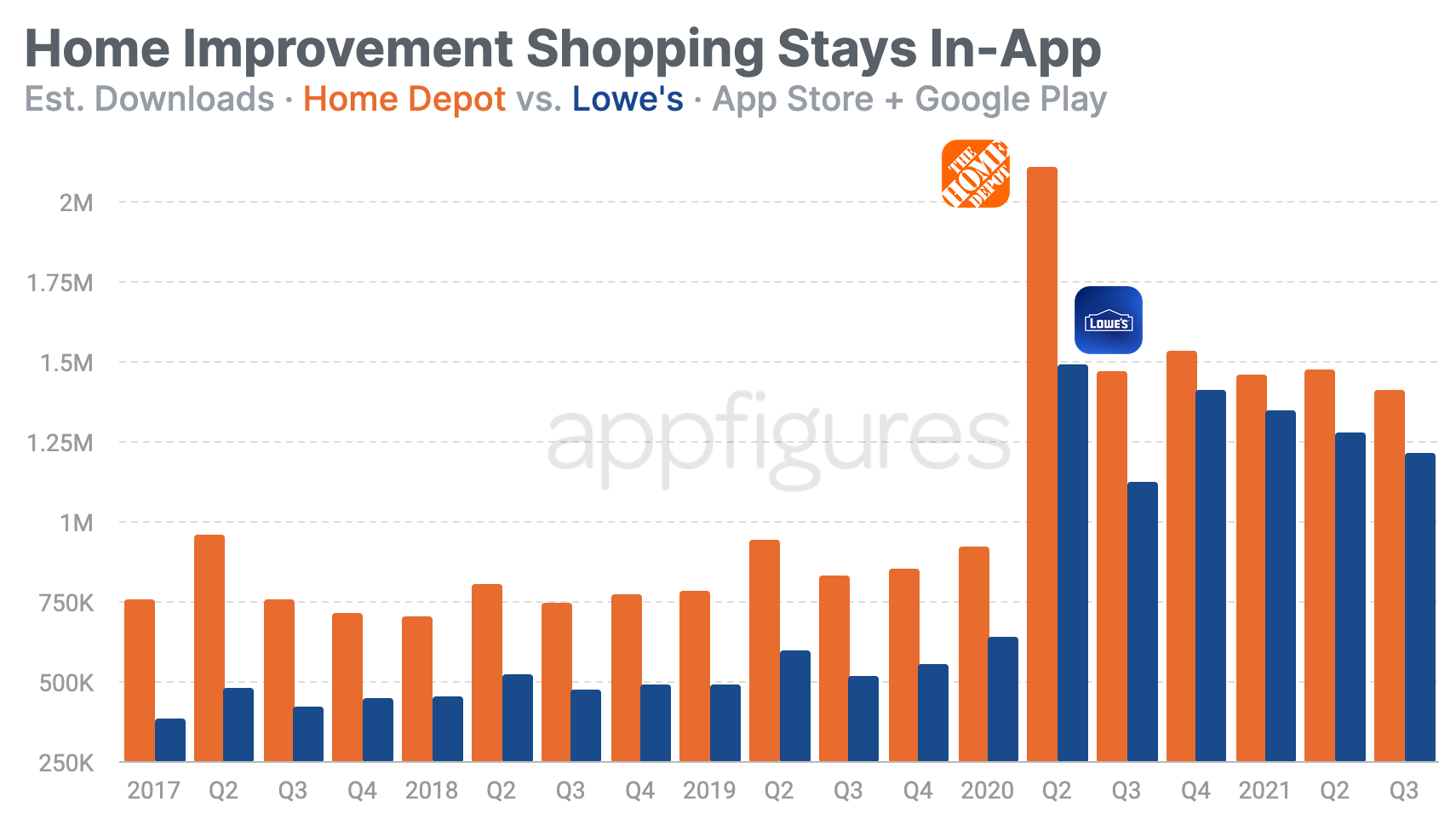 According to our estimates, in 2019, the Home Depot and Lowe's saw around 750K and 550K downloads every quarter, respectively. There was some variance, but overall those averages were pretty consistent with the previous year, too.

But then lockdowns hit, sending demand way up while forcing transactions to take place safely via app, which gave both chains (but more so Home Depot) a massive Q2 in 2020. The orange giant added more than 2M new users to its app while its blue rival added 1.5M, a huge multiple over previous quarters.

The (second) gold rush is here!™ - It's 2021, and we're in an app-first world, and it isn't just shopping. For consumers, things are convenient and in some cases, even cheaper, the experience is pretty good, and there's a lot of variety. For developers, the opportunities are bigger than ever before. I hope you're taking advantage of that.