Remember GETTR, the latest Twitter clone to promise free speech that launched last year? Download-wise, it had a spike on launch but downloads mainly declined until a couple of weeks ago, podcaster extraordinaire Joe Rogan tweeted a link to his new GETTR profile and said "Join me on GETTR". 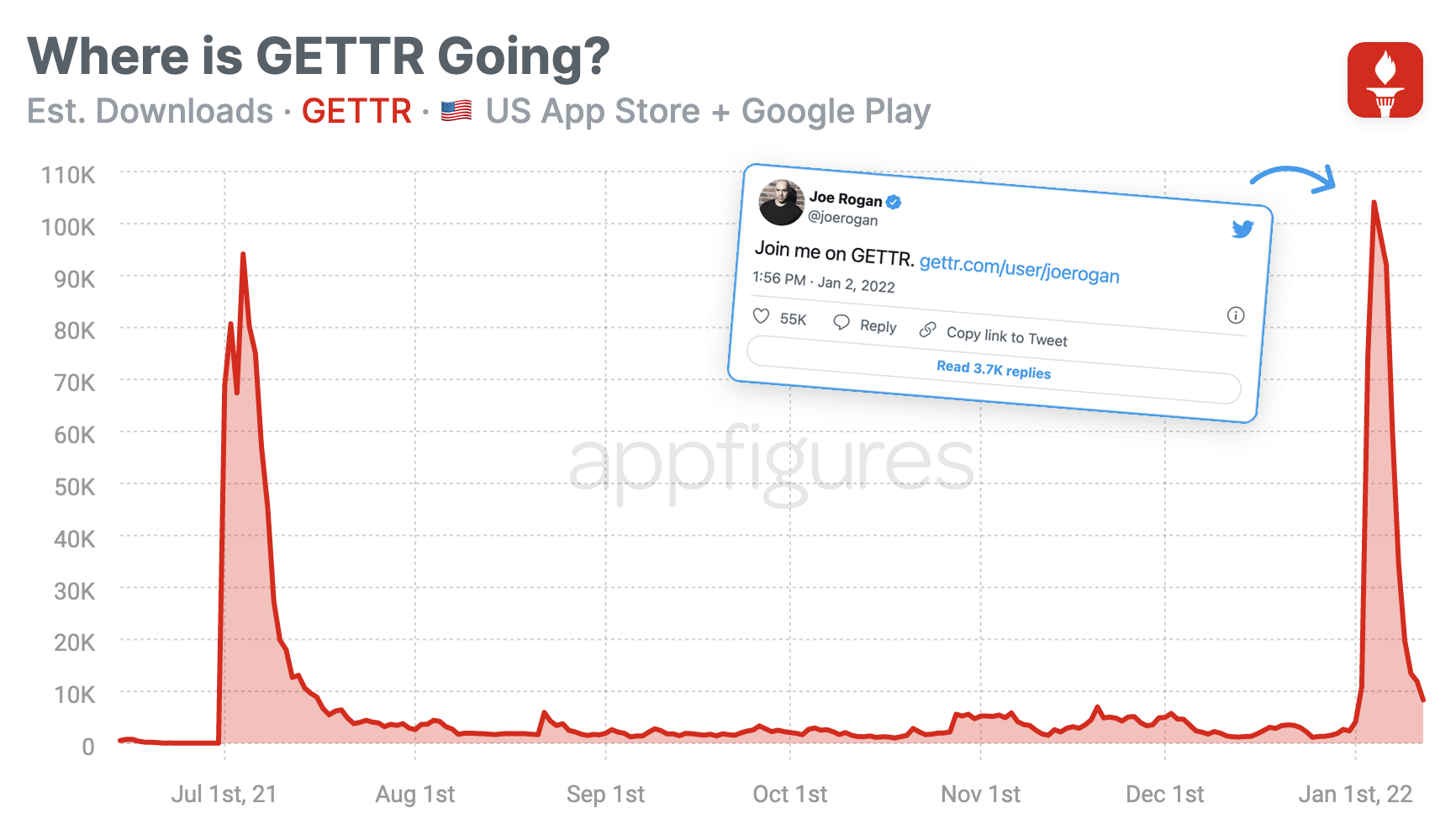 And his followers followed! Downloads in the US spiked the next day by a factor of 50, going from an average of 2,000 downloads a day to over 105K on January 3rd, a day after the tweet. They kept going strong for about a week. That added about 300K new mobile users to the platform in the US, according to our estimates.

But Joe's not done yet!

After a few weeks on the platform, Joe is no longer happy about it. In an interview, he said he wants to leave because they lie about follower counts but can't figure out how to close the account.

Turns out GETTR's follower count includes the Twitter follower count for profiles that belong to the same person. I want to use an emoji here, but there are too many options to choose from.

GETTR confirmed they do it because "soon" they'll be adding the ability to cross-post. I have a feeling Twitter won't like that too much.

Say what you will about Joe Rogan, but at least he says what he thinks.

In case you have no idea what I'm talking about, it's my score from today's word puzzle on the internet-famous game Wordle. A simple word game that went viral last month. The thing is, the game isn't mobile!

The droves of curious users who opened up the App Store looking for it, however, found a different game, also called Wordle!.

I'm not talking about the clone, but rather a different word game altogether with the same name that's been around since 2016. 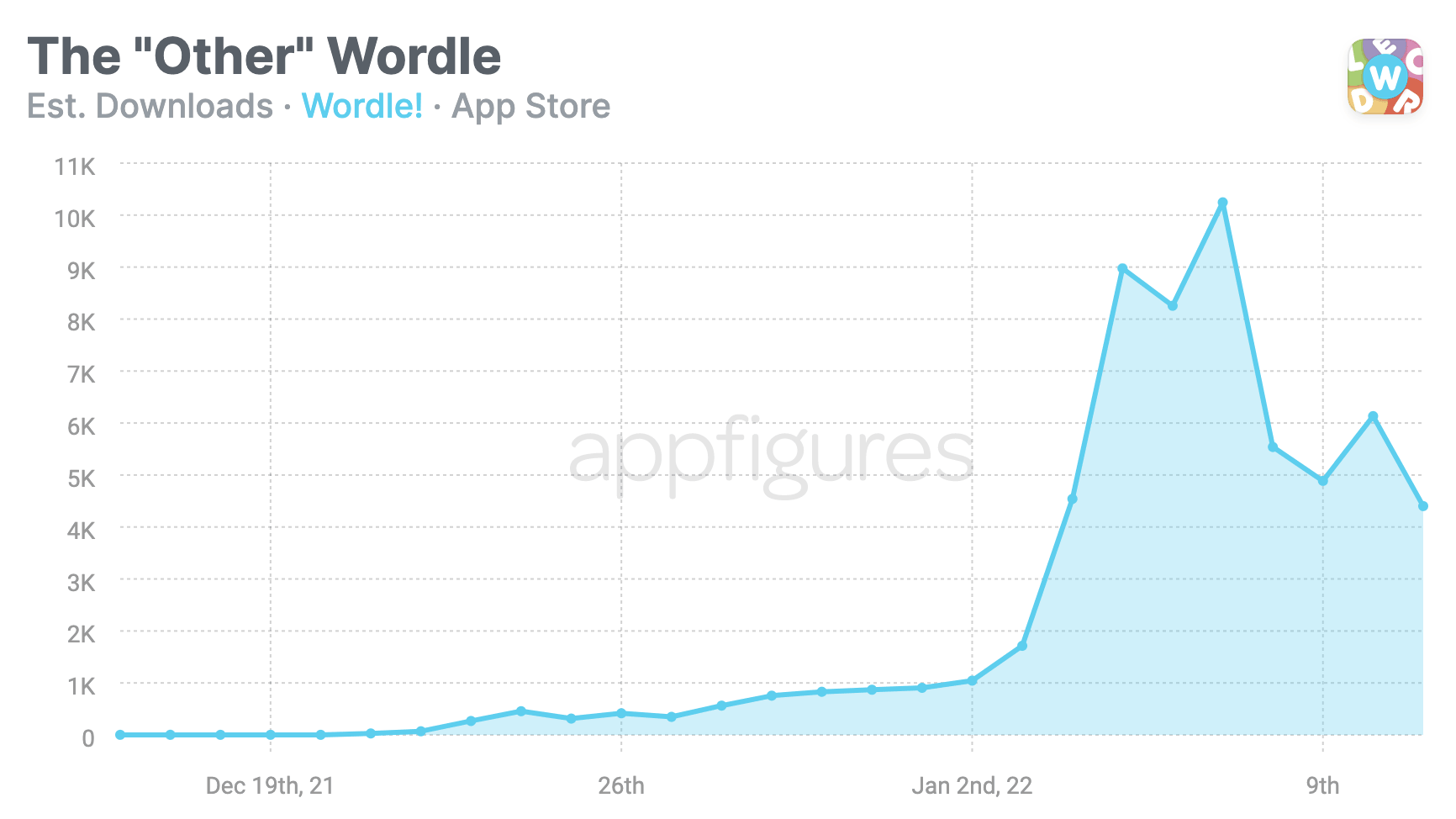 Downloads, which were so low before the web game got popular we couldn't even estimate them, slowly grew, adding 10,000 downloads in a single day last Friday.

That's pretty wild for a game that hasn't been updated since 2016 (and looks like it). Since December, when the name got popular, Wordle! was downloaded 62K times on the App Store, according to our App Intelligence.

Something similar happened to project management app Clubhouse when the audio-first social network started getting traction. In that case, however, they decided to change the company's name altogether. I think that was silly, but that's a topic for a different day...

3. PUBG Takes Aim at the Clones

Clones are a huge issue for games and apps alike, one that has been going on for ages. But PUBG is no longer okay with that!

Earlier this week, Krafton, the company behind battle game PUBG, sued the maker of a competing game Garena Free Fire, along with Apple and Google for enabling them.

Why is PUBG going through all that effort? Easy, Free Fire is making money! 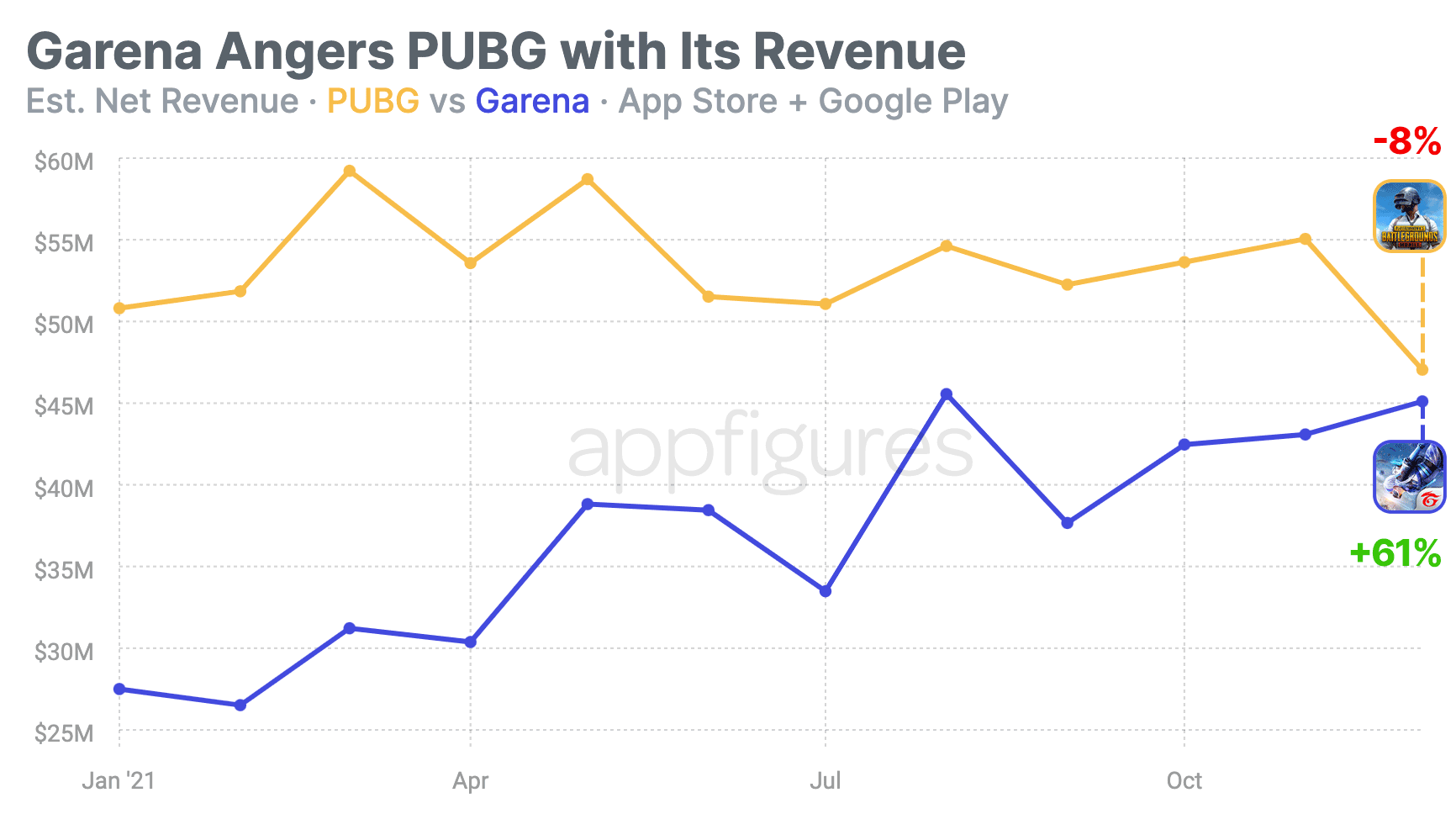 According to our app intelligence, in the last year, PUBG's revenue declined by 8%, while Garena's grew by a whopping 63%! That'd anger me, too...

In absolute terms, we estimate that PUBG and all of its localized variations (one for China, another for India, and there's a lite version, too) earned $640M in net revenue from the App Store and Google play.

Garena Free Fire + Free Fire Max have earned $440M of net revenue in the same period, according to our estimates. It might sound smaller in comparison, but it's the difference in growth direction that's very different, and that's where the problem is.

According to a few comment threads I read about this, PUBG could have a case here. I'm not a lawyer, so I don't know how true that is, but it'd be interesting to see where this goes and if suing clones will become a new trend. 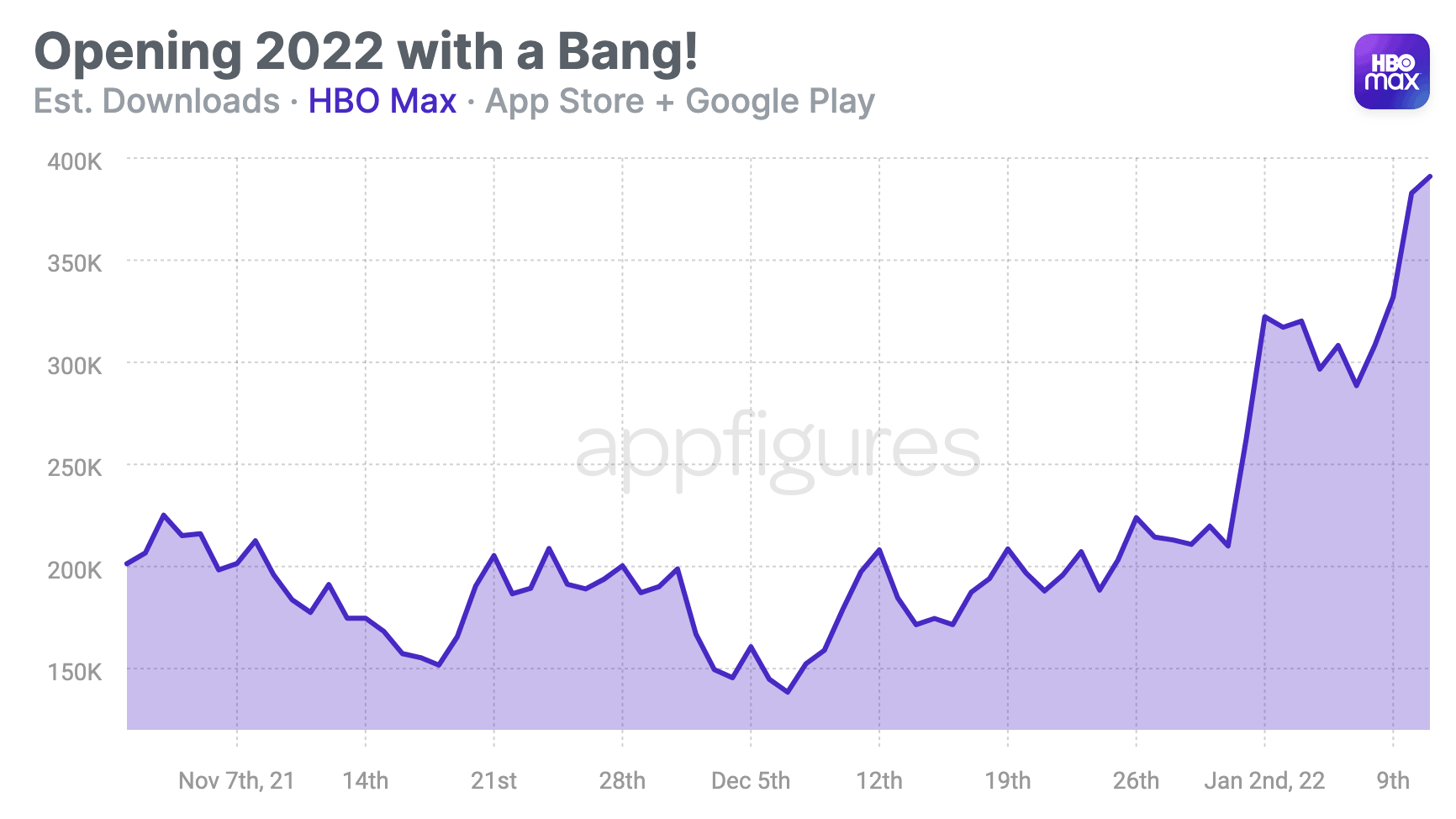 A new app rose to the top of the US downloads chart this week. The app's name is Locket Widget, and it gives users the ability to put a picture of their friends as a widget on their home screen.

Since the beginning of the year, when the app became viral, Locket Widget was downloaded 1.5M times from the App Store, according to our estimates. 31% of those downloads came from the US, 11% from the UK, and the rest were scattered over many many countries.

So, how did an unknown app without no ad budget take command of the App Store?

The developer of the app credits TikTokers sharing videos of the widget to going viral, and I believe that. It's not the first time that's happened, and I guarantee you it won't be the last.

TikTok's momentum makes it into an ideal way for apps and games to get big, and if you've got an app or game that needs to grow, you should take the time needed to figure out how to leverage that momentum.

If you're in the "I don't get TikTok" camp, now's a great reminder that you should leave that camp immediately if you want more downloads.