Apple's and Google's algorithms may be black boxes and completely undocumented, but patterns start to emerge if you look at enough sets of results. In this Teardown we'll look at keywords with slightly lower popularity to see if the same rules we've seen before apply.

In case this is your first time here, in this Keyword Teardown, we'll search the App Store for three unique keywords and analyze the results to highlight why each one is ranked where it is, so you'll know what you need to do to get your apps and games to rank.

We'll kickstart the teardown with a highly competitive keyword that isn't that popular. 35 isn't a low score in any way, but 98 for competitiveness definitely is. How does that happen, you ask? It's usually a result of apps that target multiple keywords. 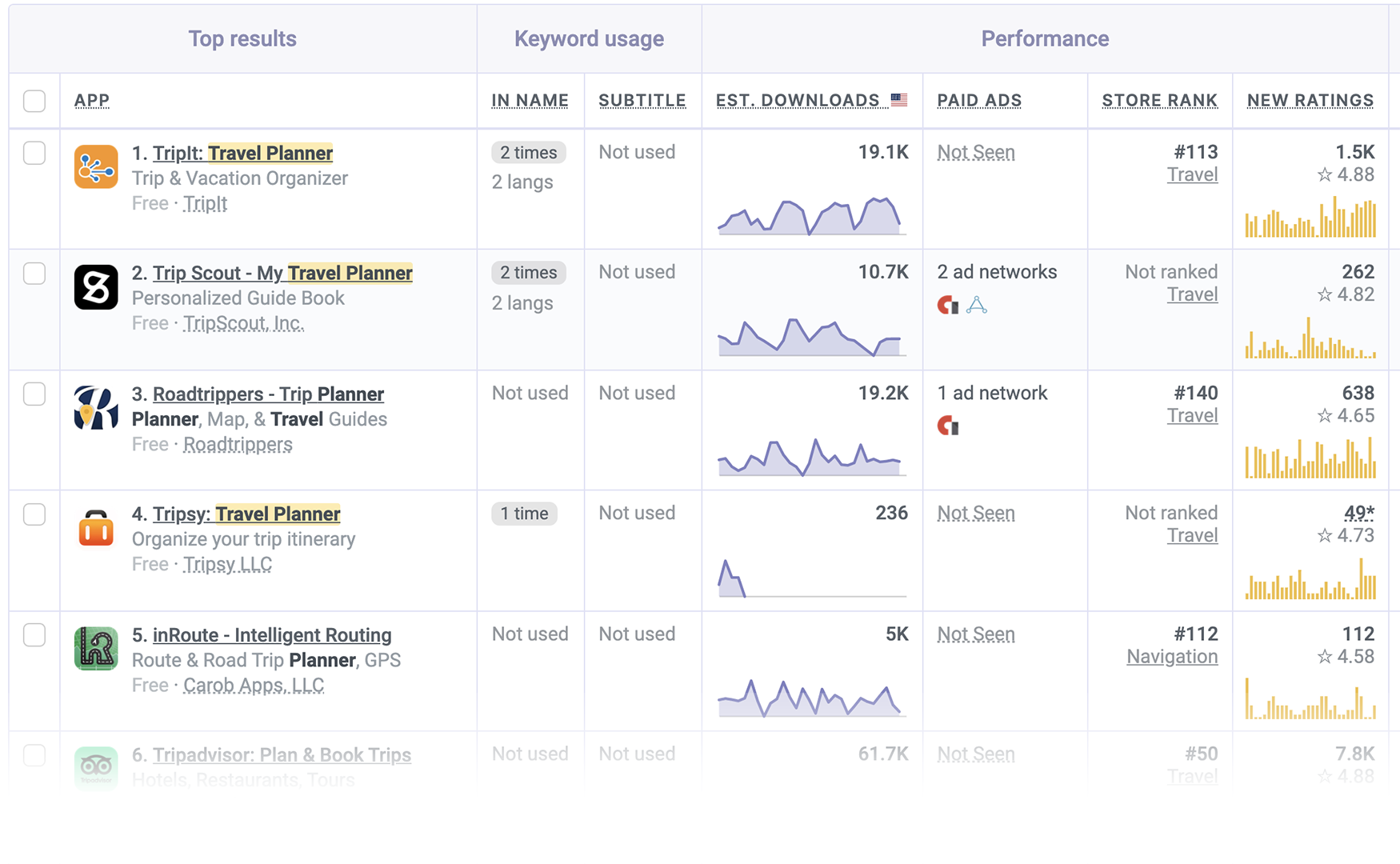 At first glance, I see every rule we've seen so far apply. Apps with the keyword in the name do better with those that don't, and of those that do, it's really all about ratings.

At #1 we have TripIt, which uses the term right in its name. It's worth noting that it isn't the app with the most downloads. That's reserved for #3 Roadtrippers, but what Roadtrippers gets wrong is its keyword placement. I'll get to that in a minute.

In second place, we have Trip Scout, which barely gets any ratings (262 in the last 30 days), but of the top 5, it + #4 are the only other apps to use the term in the name, and #4 has fewer ratings. Are you starting to see the matrix here?

The #3 result, which could easily tweak its name to #1, chose to focus on a different term (Trip Planner) with this keyword as its secondary keyword, and it shows. I checked out trip planner, and it is more popular, so that's probably a good choice.

This is a good point to pause and remind you that just because a keyword sounds good, it doesn't mean it's the best one for your app. Learning from competitors is a great way to find keywords that are relevant and potentially more popular than the ones you're targeting now.

At 4th place, we have what I can only describe as hope for new apps. Tripsy has just a few downloads, not enough for our estimates to catch it, and just a handful of new ratings. But! It's using the keyword in the name and without any of that ugly duplication we've seen before. Its competitors don't use their keywords right, so it manages to squeeze into the top 5.

That means any app can do that! Nodding your head in disbelief? Well, there's a secret...

You can't do that with every keyword. Why? Because it's really all about what the competition is doing. Or, in this case, not doing. If you can find relevant keywords that competitors aren't targeting fiercely and are still somewhat popular, you can use them to gain visibility and downloads, which will give you what you need to (later) tackle more popular keywords.

And guess what... You can find those keywords quickly by looking at what other competitors rank for. The Competitor Keywords is a super easy way to do that.

Lastly, at #5, we have InRoute, which also seems to be more focused on "trip planner". Not even all that much focused because that keyword is at the end of its subtitle. What inRoute seems to focus on is "intelligent routing", which has a popularity score of 5. That's what we'd call wasteful. Very. Very.

Let's take it down a notch and see if things continue to make sense.

At first glance, I see what looks like the algorithm doing what algorithms do... Follow the rules. But that bottom is a bit weird. Let's start with what makes sense.

AllTrails has the keyword at the beginning of its subtitle and also has the most new ratings in this group, so it shouldn't come as a surprise that it's #1.

Behind it is Gaia GPS, which uses the keyword in its name. No duplication or other ugly mistakes. But, a fraction of the new ratings, which is why it's sitting pretty at #2. I believe Gaia doesn't need to beat AllTrails' new ratings but just get close. The algorithm will reward the focus it's putting on the keyword, and it can slide into #1. It's hard to estimate how many new ratings, but I have a feeling 3k - 5k would do the trick. What do you think?

Why do I think that? Well, if we look at #3, Avenza, we can see it has more new ratings, so it should be higher. But! It's using the keyword in its subtitle, which hurts its chances. Because the ratings are close enough, the keyword placement becomes very important and allows Gaia to win this race.

This is where things start to get weird.

The fourth result doesn't mention "hiking" or "gps" in its name or subtitle. The keyword is (very likely) in the keyword list, which, as you can see, is very useful here. That + a decent number of downloads give it this rank.

Don't get me wrong, this one's odd for sure, but while signals like new ratings are strong, downloads still play a role. When the algorithm doesn't know what to do, it looks at that, too.

And at #5 I have another treat for you. A paid app! That's right. We don't see those often, but we are right now.

GPS Tracks squeezes into 5th place even though it costs $3.99 to download. Paid apps are a dying breed, but it's a great reminder that with good keyword placement and new ratings, even they can rank.

And lastly, I want to tackle a keyword that has the lowest popularity I've analyzed in this series so far. A popularity score of 15 means that some people are searching for it, but not many. Enough to be a good starting point if you can't rank in more competitive ones and a good one for a long-tail keyword, but that's pretty much it.

At first glance, it looks like someone clicked the sort button on the ratings column here. Why's that? Because that's what Apple's algorithm uses when all of the options it has to choose from are fairly similar in how they use their keywords.

Low popularity keywords are usually not on anyone's main keyword list, which is why you'll rarely see apps targeting them. That means the algorithm will usually have little to go on. Maybe a word in the subtitle and another in the keyword list. Maybe in the name. It's rarely as clear as more popular ones. And that's a great opportunity!

At #1 we have AllTrails, which is the most popular name in this category. Aaaaand, the one with the most ratings. It uses the words sequentially in the subtitle. That's not hurting either.

Right behind it is Avenza, which has nearly an order of magnitude fewer ratings, but the keyword appears in the name and subtitle.

Tip: While the algorithm can pluralize (ex. "map" = "maps") that's pretty much all it can do, which is why Avenza uses both "maps" and "mapping" and it's not considered duplication.

Gaia GPS, which is a pretty clever name! is holding steady at #3 by including the term between its name and subtitle, and with slightly less ratings than Avenza and more than the 4th place competitor.

Fourth is onX, which includes the term split between the name and subtitle, like its competitors. Except that it duplicates "map" and "maps" so it's only technically in the subtitle as far as the algorithm is concerned. It doesn't really matter, though, because it has far fewer downloads than Gaia, which I don't think is named after the progressive trance group.

Last for this set is Trailforks, which uses the term right in its subtitle. With a short name, it's also putting more focus on the keyword, which is great. At a little under a third of new ratings, though, the focus isn't helping it. This is a good time to experiment with the term right in the name and also to try and get more users to rate the app.

And there we have it. Even low popularity keywords follow the rules. I like the idea of starting big. Who doesn't, right? But if you just can't compete on bigger keywords, you can always start here. Now that you know how to win these, of course.

What did we learn today?

Are You Doing This?