App Teardown - Does Quibi Even Have a Chance on the App Store? 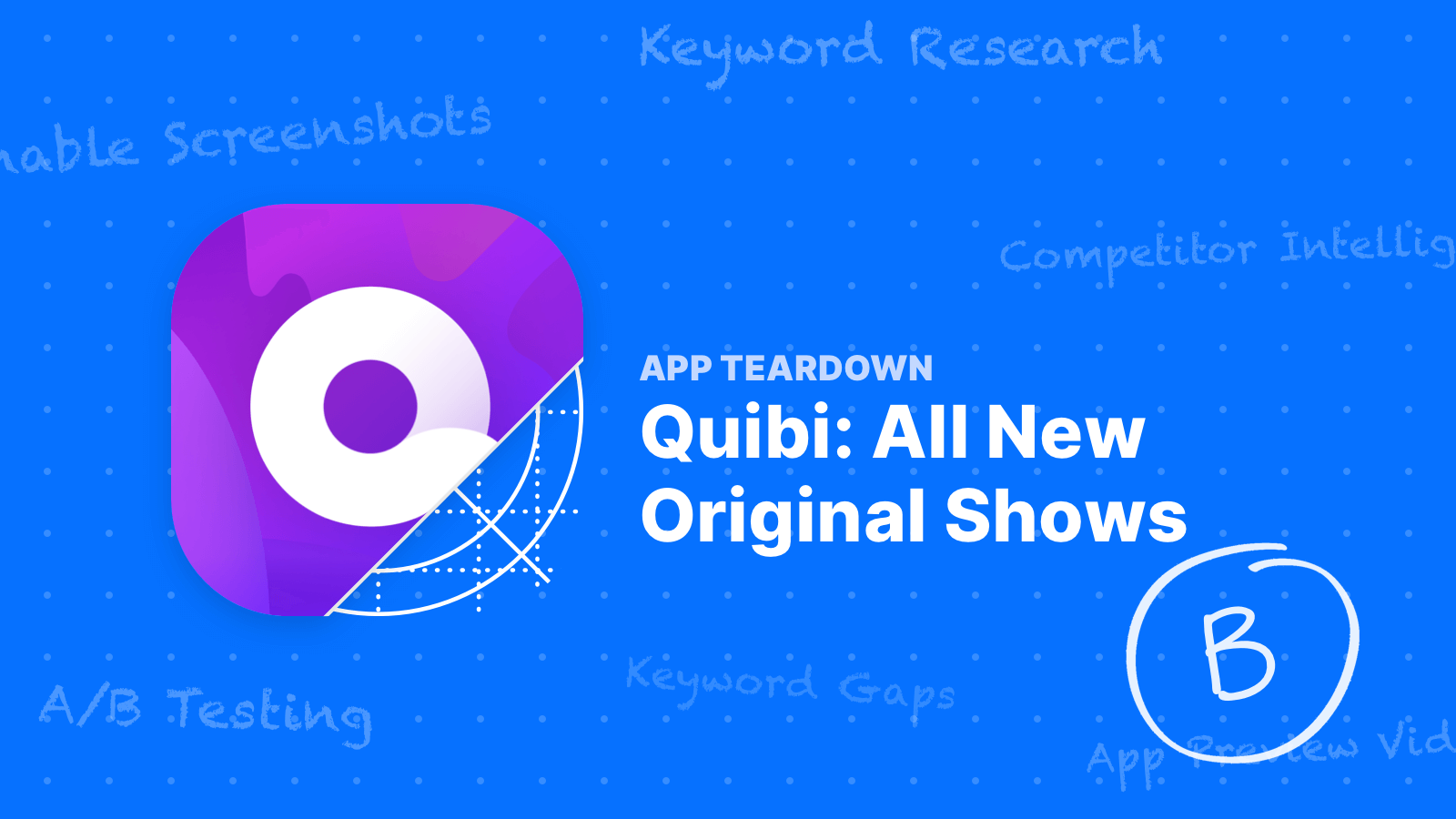 Quibi is a new streaming app with a twist. It offers original shows that are very short. Is this a solution looking for a problem? But, on the App Store, Quibi could easily find the problem they're trying to solve.

Taking on streaming giants, Quibi, an otherwise unknown name, would be wise to leverage ASO and take advantage of the downloads they're getting from paid ads to capture organic. Let's take a closer look.

Quibi gets a very plain B

Quibi by the Numbers

Quibi launched in April, right into a global lockdown. Here's how it's performing in the U.S. App Store, based on our Competitor Intelligence:

Quibi Takes on the Big Guys

Quibi's lockdown release, a time in which streaming apps saw faster growth, didn't really take off as expected. Its pre-lockdown plan was to target the commuter crowd. Not so much of that during lockdown.

That aside, Quibi's main challenge was to differentiate the service from the streaming giants they weren't really competing with.

Buuuut, they didn't, and there are two potential problems here:

One of those is easy to fix, the other, very expensive.

Quibi is a Lockdown Baby

The totals above give you an indication of downloads, but let's see how Quibi's really doing when matched against their competitors: 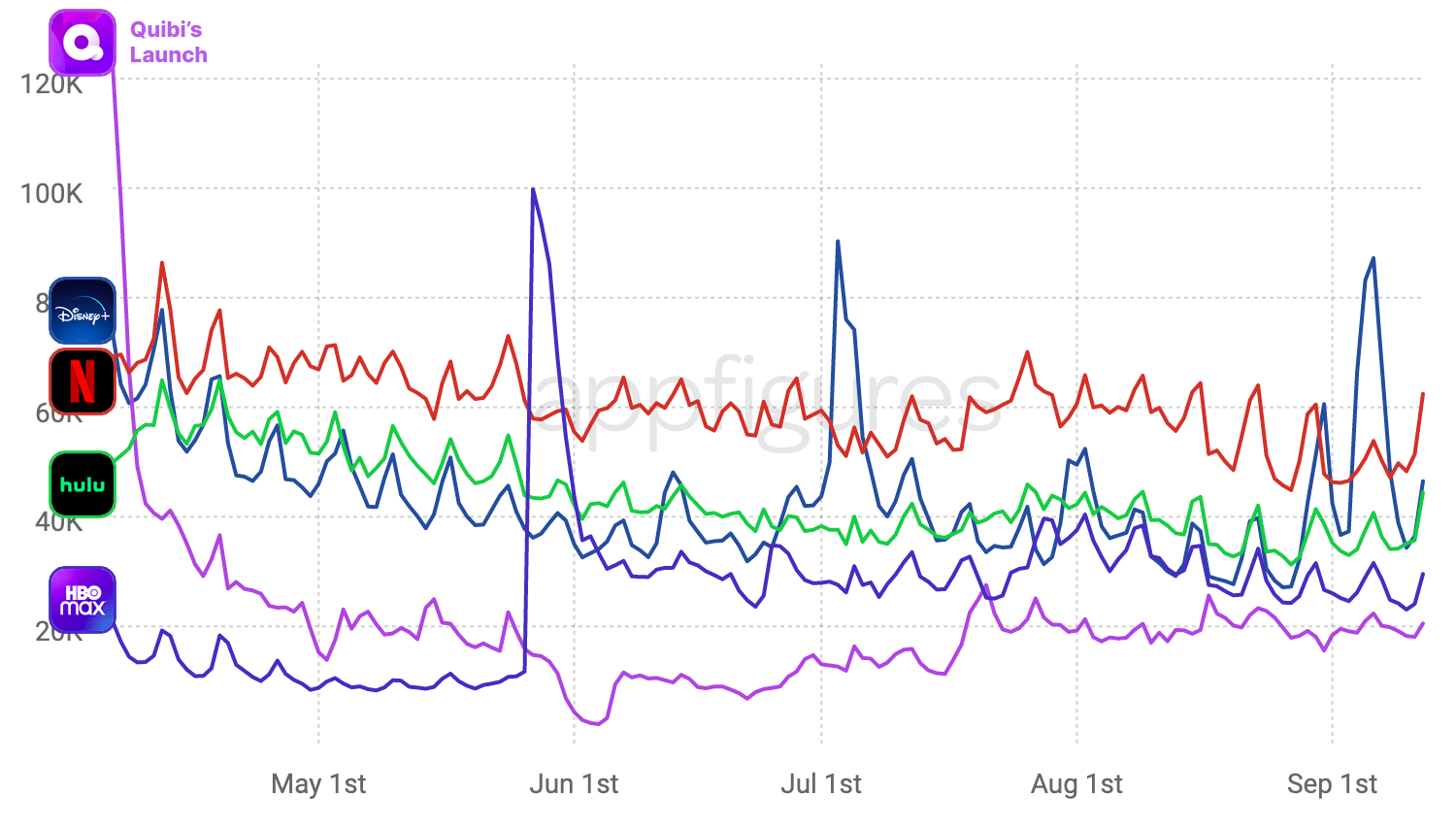 A great launch day, propelled by a heavy swath of TV and YouTube ads but died right away. Mired in controversy, Quibi eventually recovered and even saw some growth in July.

Not enough to take on its rivals, but enough to be in the race. With so many downloads, you'd expect to see good organic results, just like some of the other apps we've looked at before.

Let's kick off the analysis with the keywords Quibi's using in its name and subtitle. Those send the strongest signals to the App Store's algorithm.

Let's take a look at where Quibi is ranked for these keywords:

Although the name and subtitle combo create a variety of keywords, many of them aren't at all popular, indicating they were not optimized (or optimized without data).

Now, let's reverse-engineer Quibi's keyword list. The list isn't public, but we can attempt to uncover it by looking at all other keywords the app is ranked in. We believe it looks something like the following:

Oh boy! Reverse-engineering this list was pretty challenging because Quibi isn't ranked in too many popular keywords. The app's just a few months old, so that's not a surprise.

Quibi ranks for a few competitor names, which could be a result of them being mentioned in the keyword list or the algorithm "helping" a new app.

Where Else is Quibi Ranked?

Although Quibi is new and has what we believe is a keyword list that isn't very optimized, it still managed to get ranked in quite a few keywords. The problem, most of them have a very low popularity score or none at all, which is pretty rare these days. 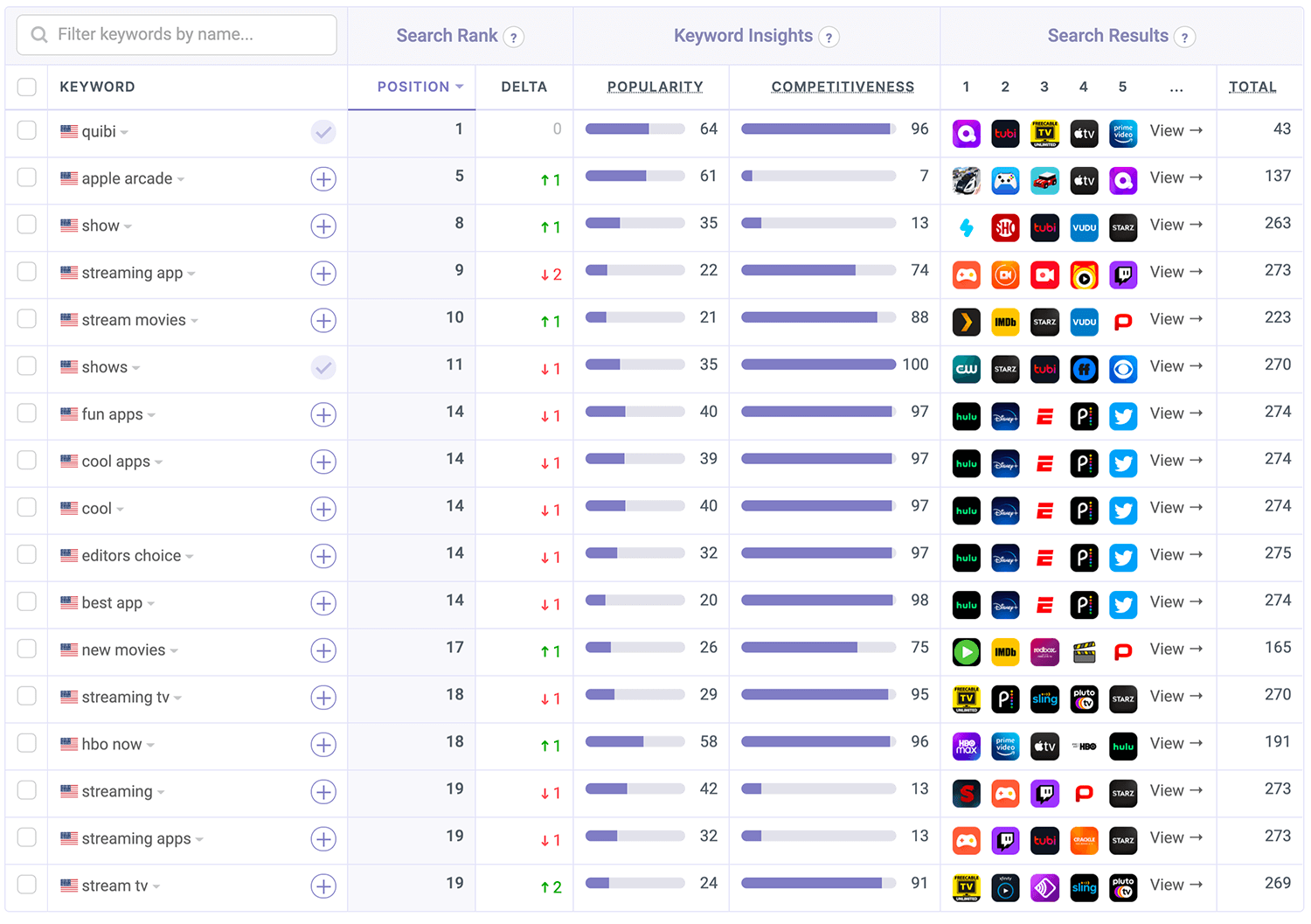 Those are the most popular ones, but the list is full of branded keywords, some of which Quibi is the only result and other not-so-popular keywords. This isn't terrible but means that with downloads like Quibi's, the right metadata can make a substantial difference. 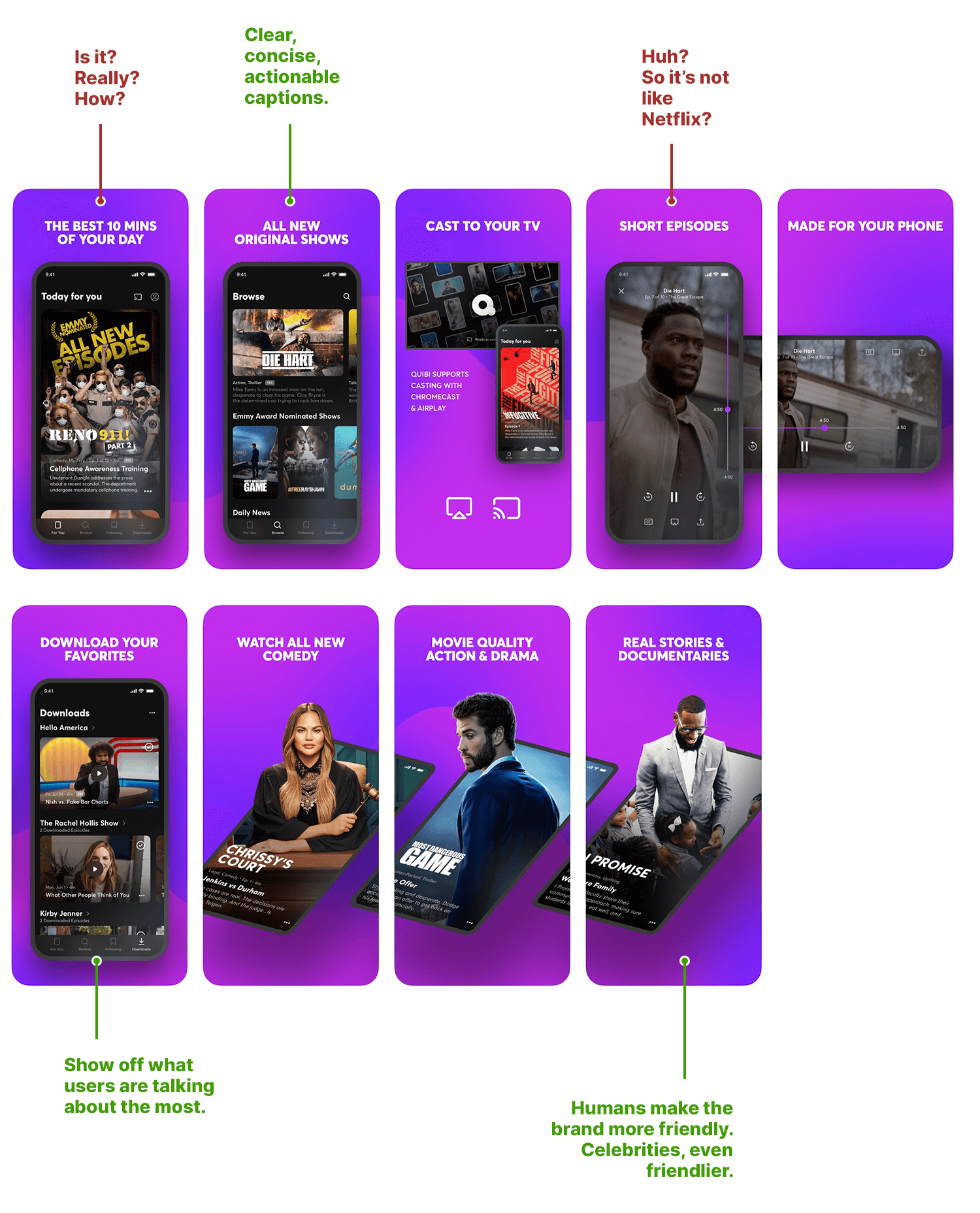 Color, contrast, captions. We're off to a good start, until you read the captions...

Quibi, again, fails to really sell its uniqueness by only hinting at having short videos. The rest of the screenshots don't really feel like they're in any particular order of importance.

This, to me, is a missed opportunity to really "sell" the short-video Quibi's all about.

No video. Not really surprising.

iOS apps haven't taken to videos as much as you'd expect because of Apple's strict rules and the high cost of production at this scale. But that's just an excuse...

A video would be a great chance for Quibi to eliminate the confusion of what it really is and highlight its unique, short, and original shows which you can't get anywhere else.

Doesn't that last sentence sell the app better than "The best 10 minutes of your day"? Be honest.

The streaming market is fairly saturated at this point, but Quibi's short-show format is certainly an interesting one. As attention spans shorten, it makes sense there would be demand for shorter content to consume. Or does it?

That's something Quibi still needs to find out. But while potentially existential, the more immediate problem is the lack of explanation of what Quibi really is. 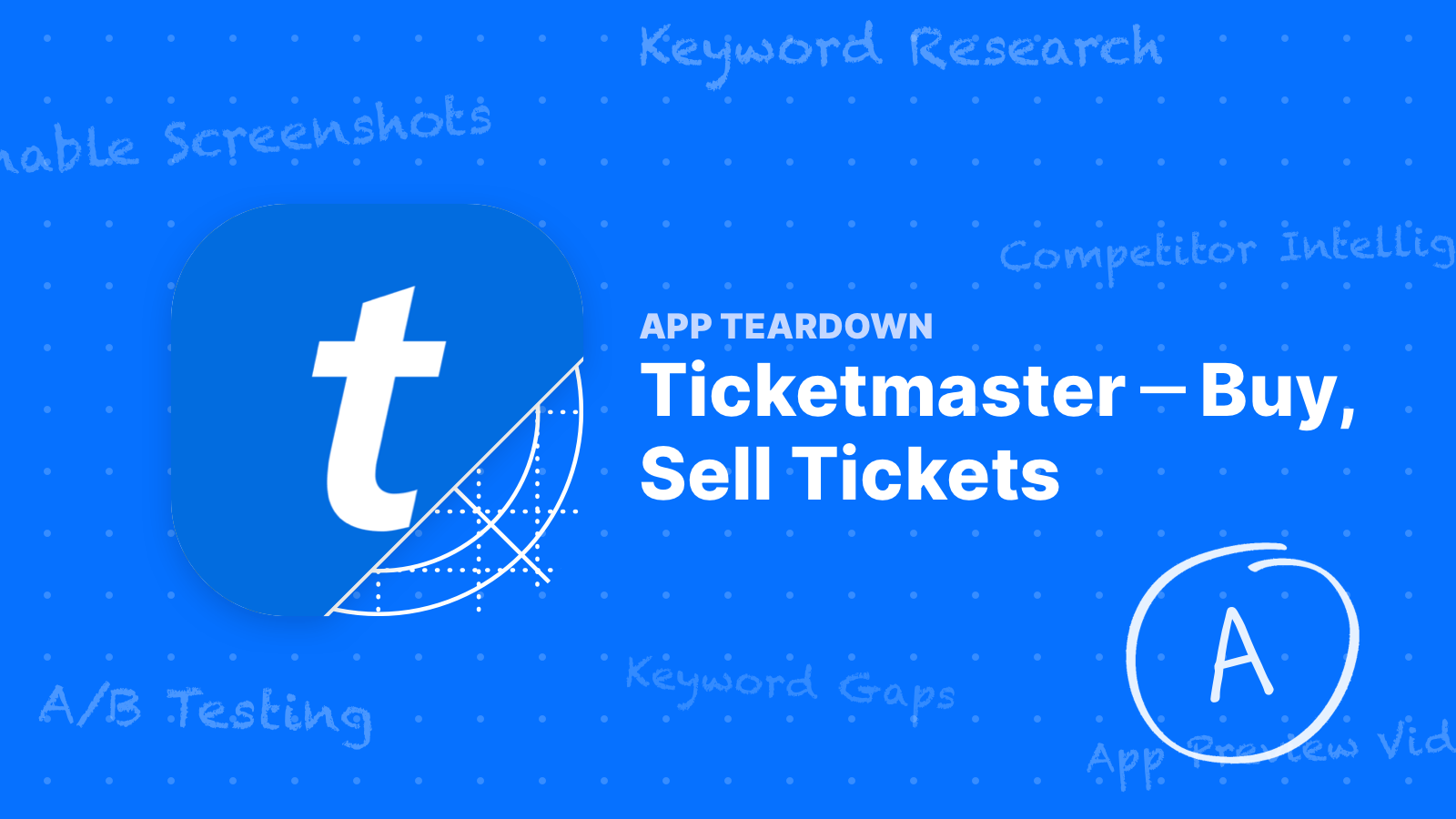 In this teardown we'll look at Ticketmaster's performance and keywords in the U.S. App Store 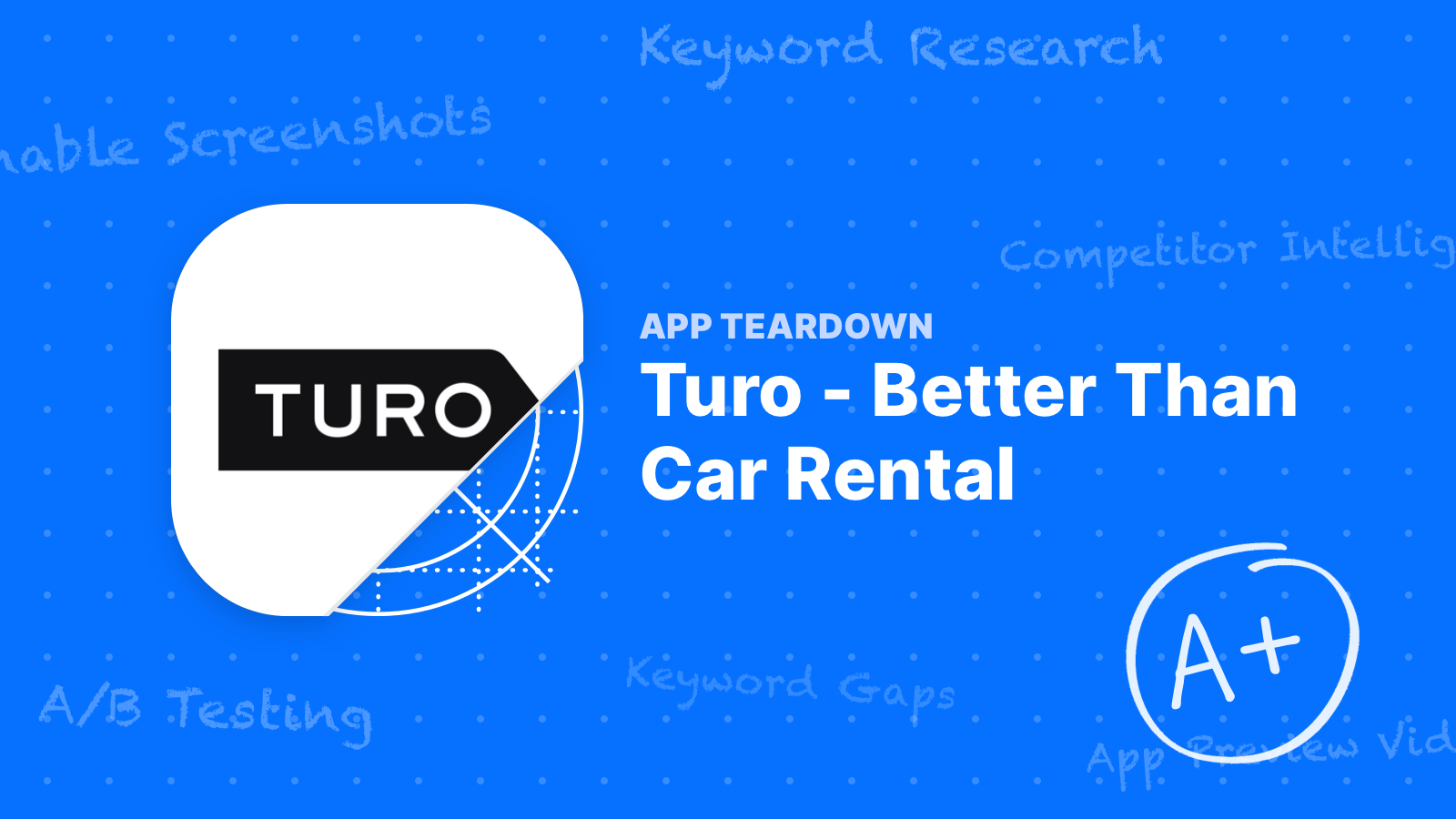 In this teardown we'll look at Turo's performance and keywords in the U.S. App Store