iOS Developers Ship 29% Fewer Apps In 2017, The First Ever Decline - And More Trends To Watch

After our report that the app economy is starting to mature last year, we started getting a lot of questions from members and friends about where the app economy is going. For this post we crunched through millions of new iOS and Android apps released over the years to look at 10 important questions and the data behind the answers.

Starting with one of the questions we field most often — growth.

To answer this question, let's look at the number of apps available for download at the end of every year for the past few years. 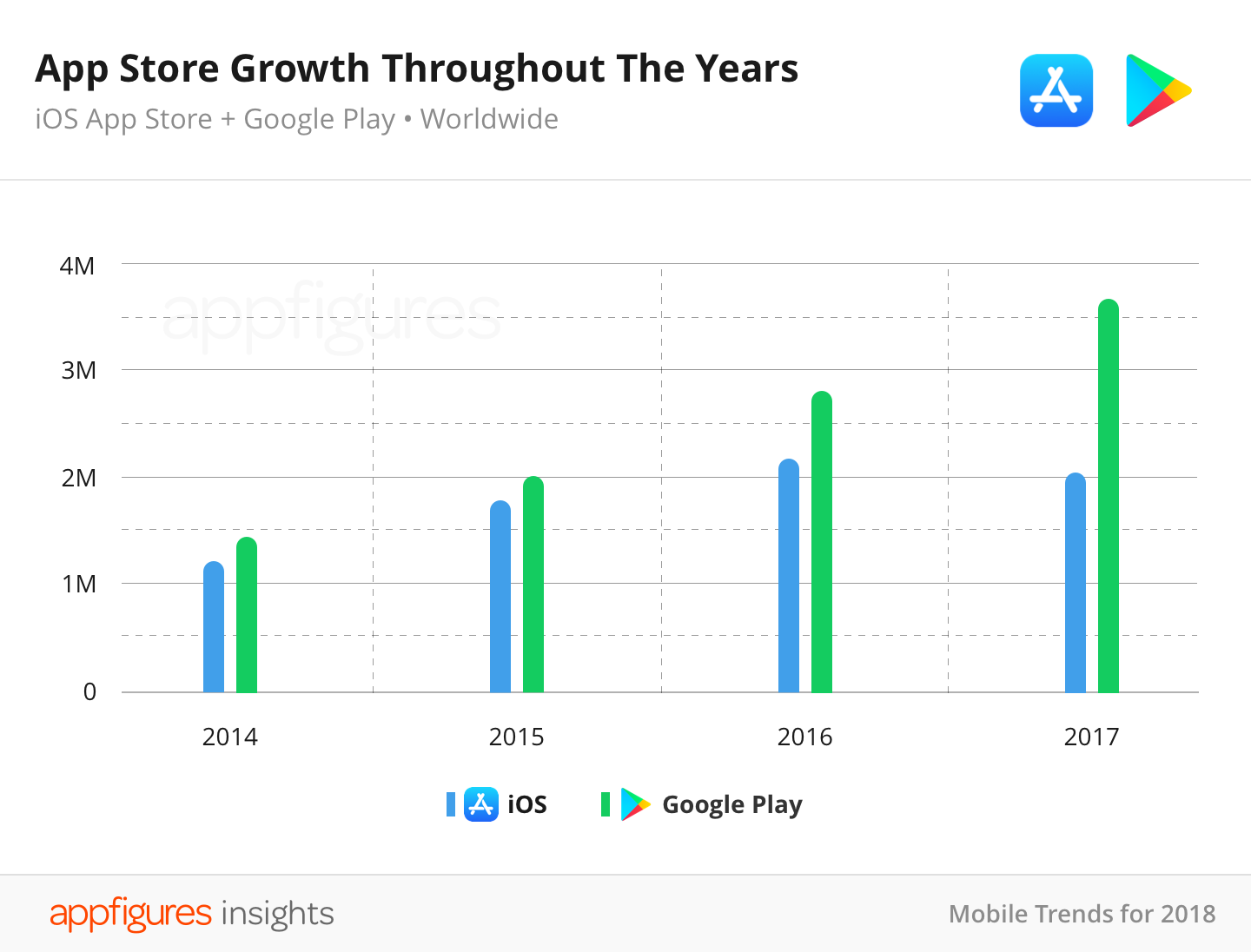 Both Apple's App Store and Google Play were growing consistently all the way up to 2017, when they split. Google Play continued to grow at a pretty good rate of about 30% to more than 3.6 million apps.

Apple's App Store however, headed in a very different direction. It shrunk. At the end of 2017 there were roughly 2.1 million iOS apps available in the App Store, a decrease of 5% when compared to the 2.2 million apps that were available in the beginning of the year.

The decline is a result of stricter enforcement of Apple's review guidelines, as well as a technical change that eliminated many old apps that were not updated to support 64-bit architecture.

How Many New Apps Are Released Every Year?

Apple's willingness to shrink its store in favor of better quality, while admirable, is not the only reason for the decrease.

Let's take a look at how many new apps are released every year. These include apps that were released and available on the store for at least one day. 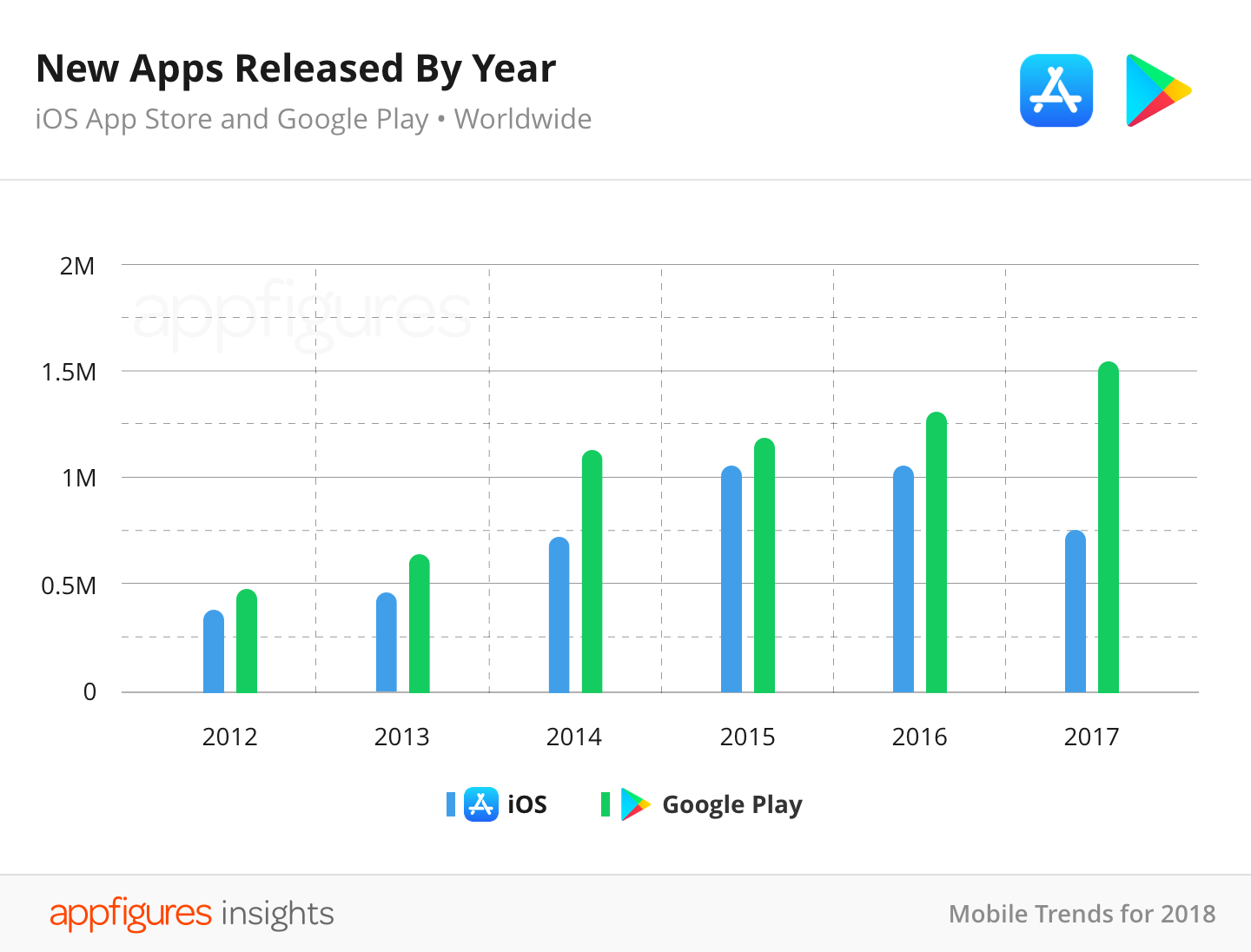 Android developers kept busy, and in the last year alone released more than 1.5 million new apps. This is an increase of about 17% year over year, the largest jump since 2014. iOS developers on the other hand, took their time releasing just 755k new apps in 2017. That's a big drop! 29% to be precise, the first drop since the App Store launched in 2008.

Are Apps Being Ported Between Platforms?

Yes! Although ~25k apps isn't that big of a number, this does show developers are crossing the platform barrier and extending their apps beyond the original release. Again, Google Play is winning the race. More than twice as many iOS apps came to Android in 2017 than Android apps came into the App Store.

How Many Apps Are Cross-Platform? 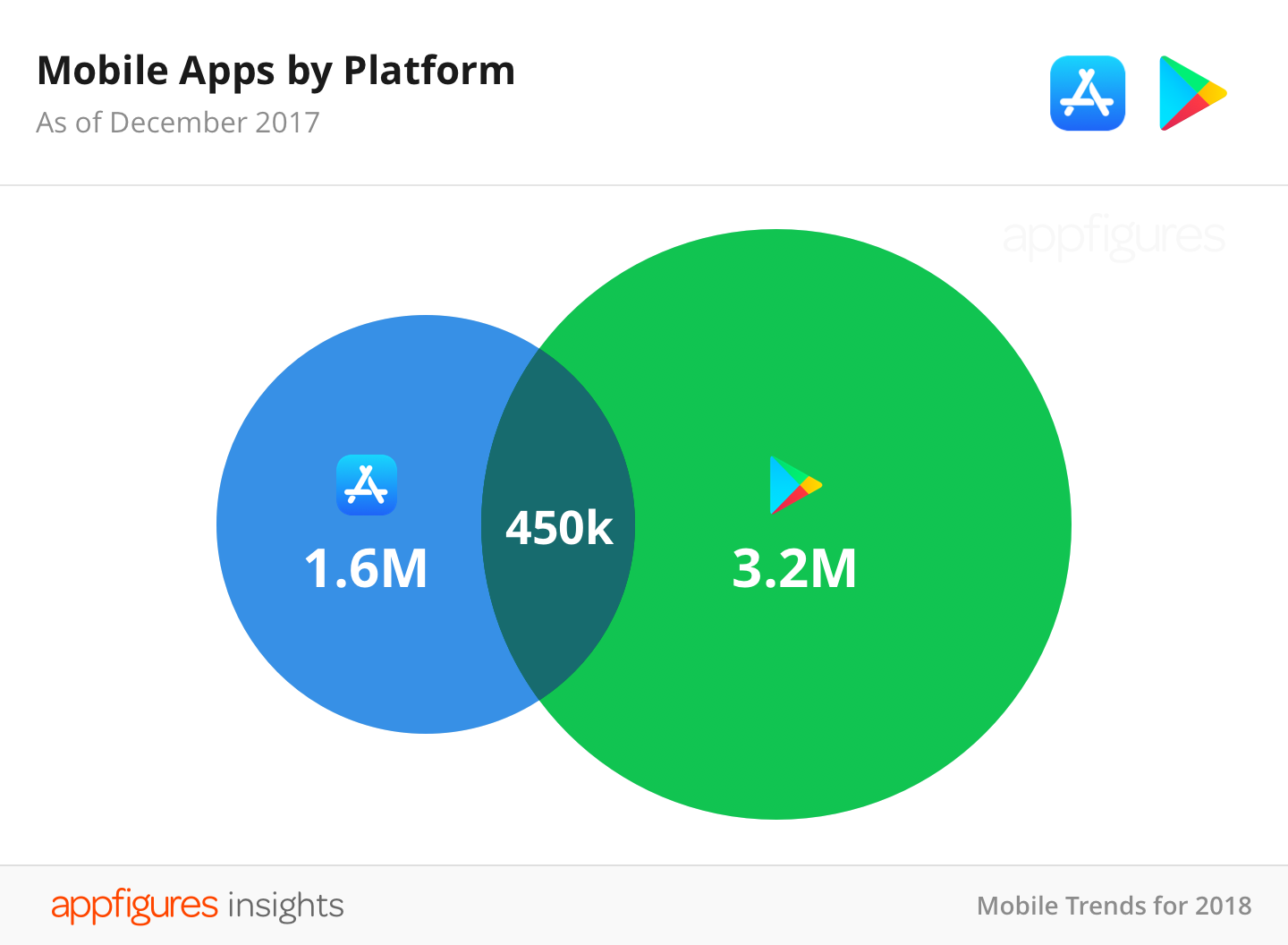 According to our algorithm that maps apps cross platforms, roughly 450k apps are available for both iOS and Android. This is a fairly decent amount, but when we look at the bigger picture, it amounts to just 8.5%.

Building and maintaining an app for multiple platforms can be a real burden, especially for indie developers and small teams.

Which Non-Native Tools Are Most Apps Made With?

Talking about cross-platform development, another common set of questions we often get has to do with non-native app development — which means using a 3rd party tool to build apps that can then be published to multiple platforms with little to no code changes.

There are quite a few tools that enable that, and using our SDK data we zoomed in on apps that used those tools. Here are the most popular non-native app development tools. 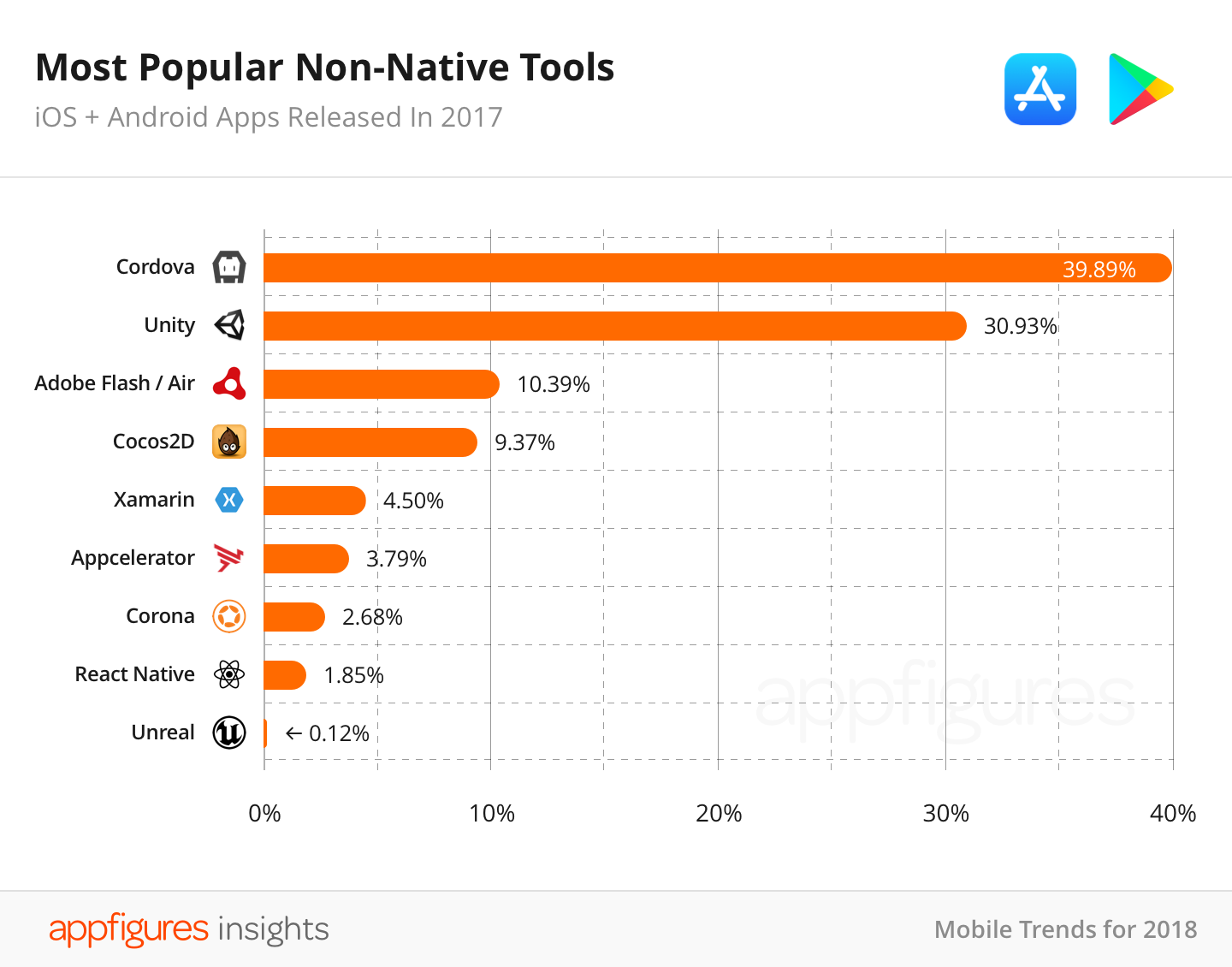 Cordova and Unity are what most app developers use to build their non-native apps and games respectively. React Native, a framework we use and love here at Appfigures, is slowly climbing up the list. We're really looking forward to seeing how developers will take to it in 2018.

Side note: We're always surprised to see new apps being shipped with Adobe Flash/Air. Not just because of the sour relationship Adobe has with Apple but also because Adobe announced Flash will be killed in the next couple of years.

Is Non-Native Development Really Taking Over?

Those are pretty interesting numbers. There's actually a common misconception that more and more apps are being developed using non-native tools so they can be deployed to multiple platforms easily.

According to our data, that's not the case.

To prove that, we looked at all iOS and Android apps released in 2016 and 2017, and compared the ones that used one of the non-native tools listed above with ones that didn't. 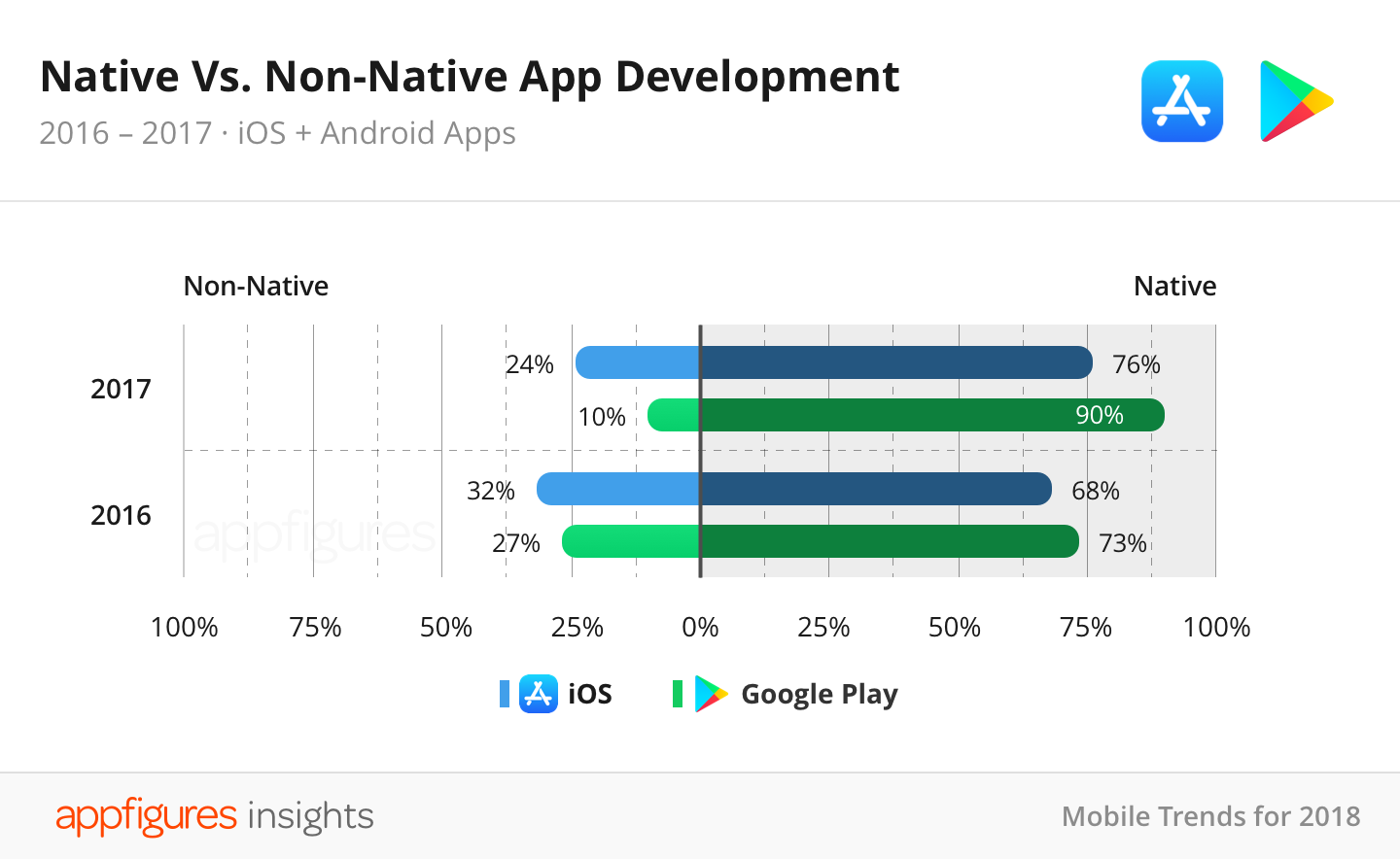 Not only is the number of non-native apps relatively small, year-over-year that number went down across both platform.

Apple and Google have made native app development simpler over the last few years by introducing more modern programming languages and continuing to enhance their frameworks. That seems to be working!

Which Countries Are Shipping The Most Apps?

Last year we started collecting location data for app developers (which helped the GSMA compile its annual Mobile Connectivity Index), so we have a pretty good understanding where developers are located.

We combined that with app release data to see which countries are producing the most apps in 2017. 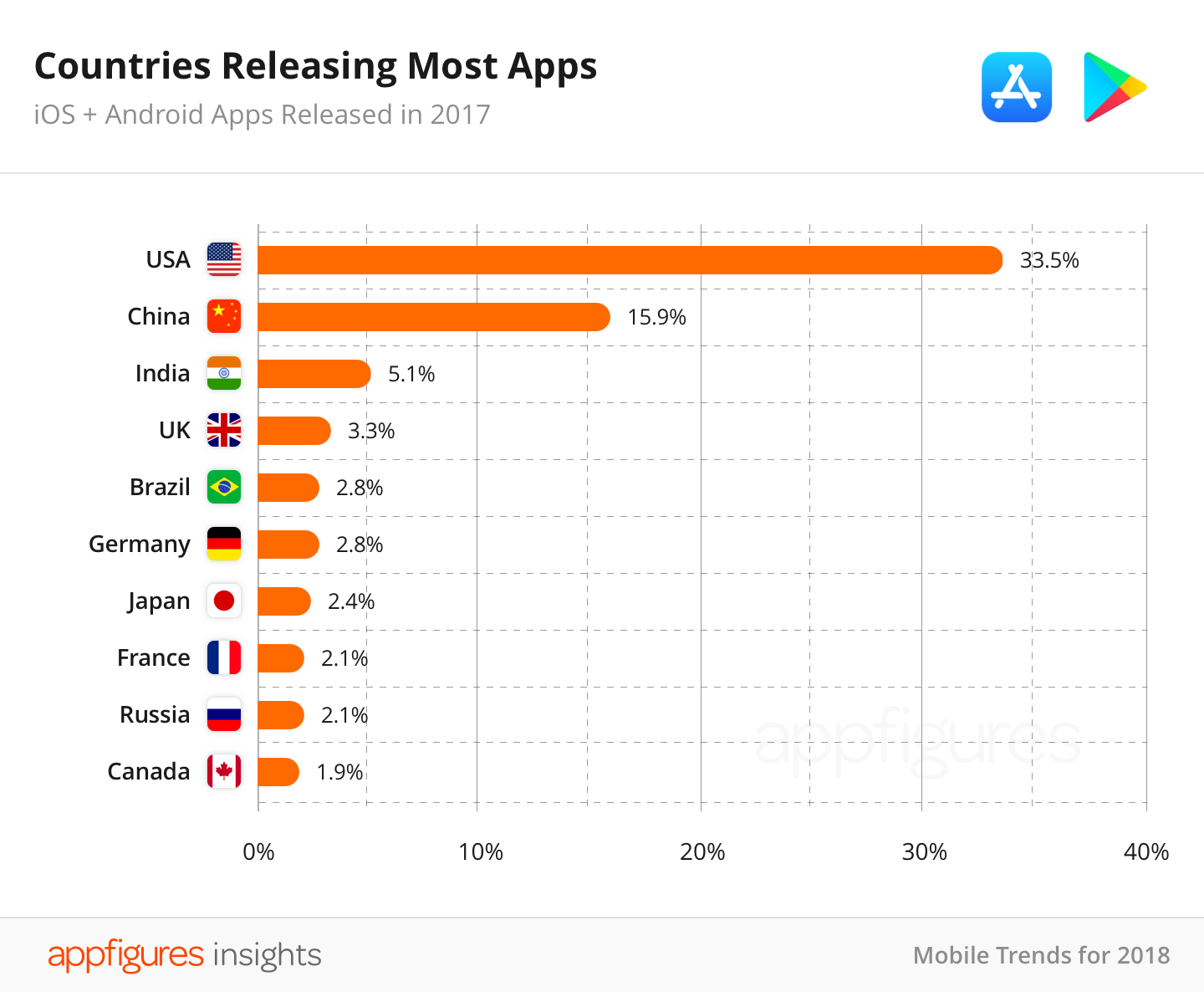 The top 10 countries on this list are responsible for roughly 75% of all new apps released in 2017. While developers in the U.S. continued to release more apps, China--the only other country with a double digit share--continued its persistent climb.

There's always talk about China, so for this question we've charted the number of iOS and Android apps released by developers that are located in China. 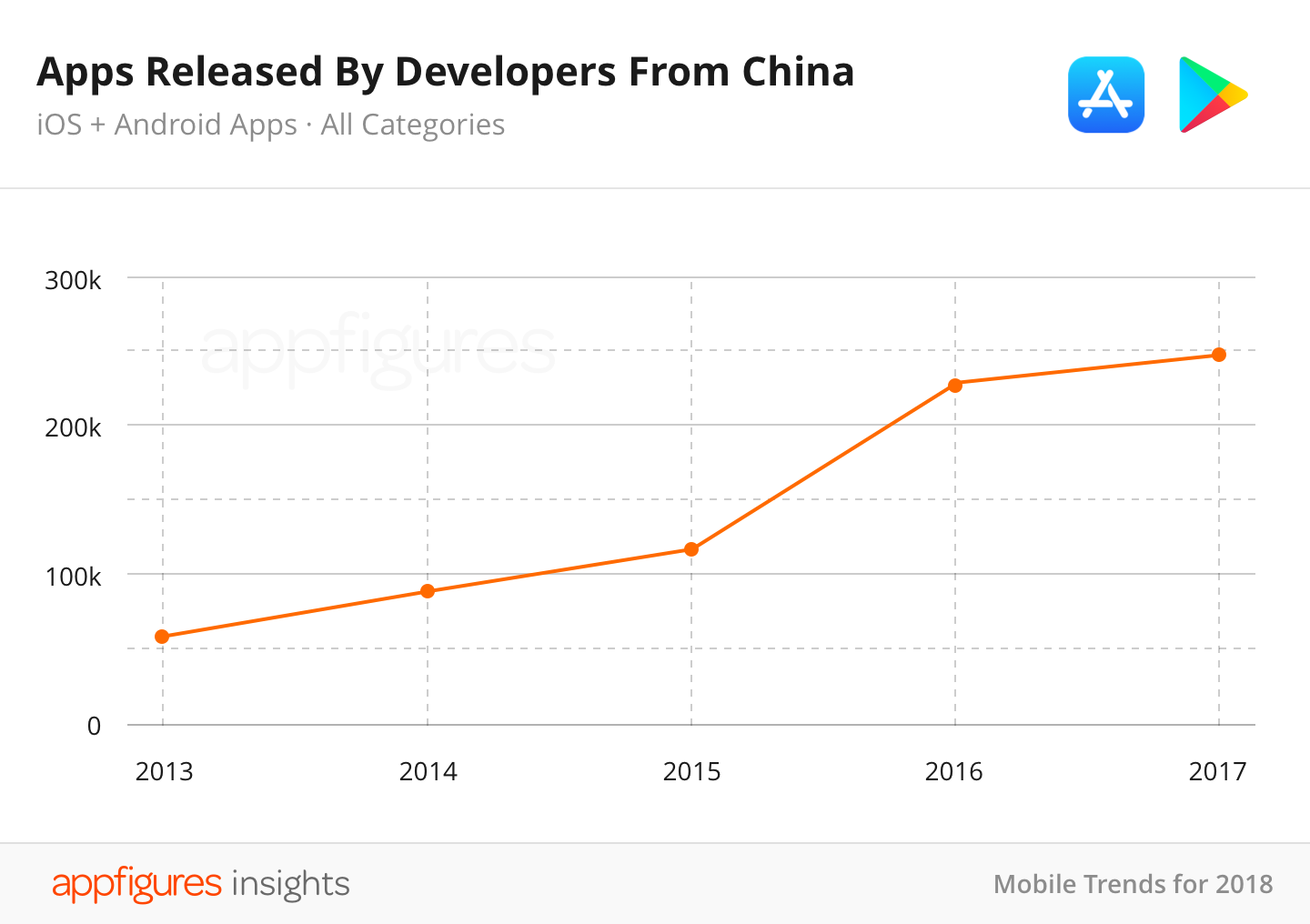 It's going up! App developers based in China are continuing to push out more apps year over year. Although 2017 did not see as many new apps as 2016, this consistency indicates healthy growth.

Which Types Of Apps Are Developers Making?

To wrap it all up, let's answer the last and most obvious question — Which categories are getting the most apps. 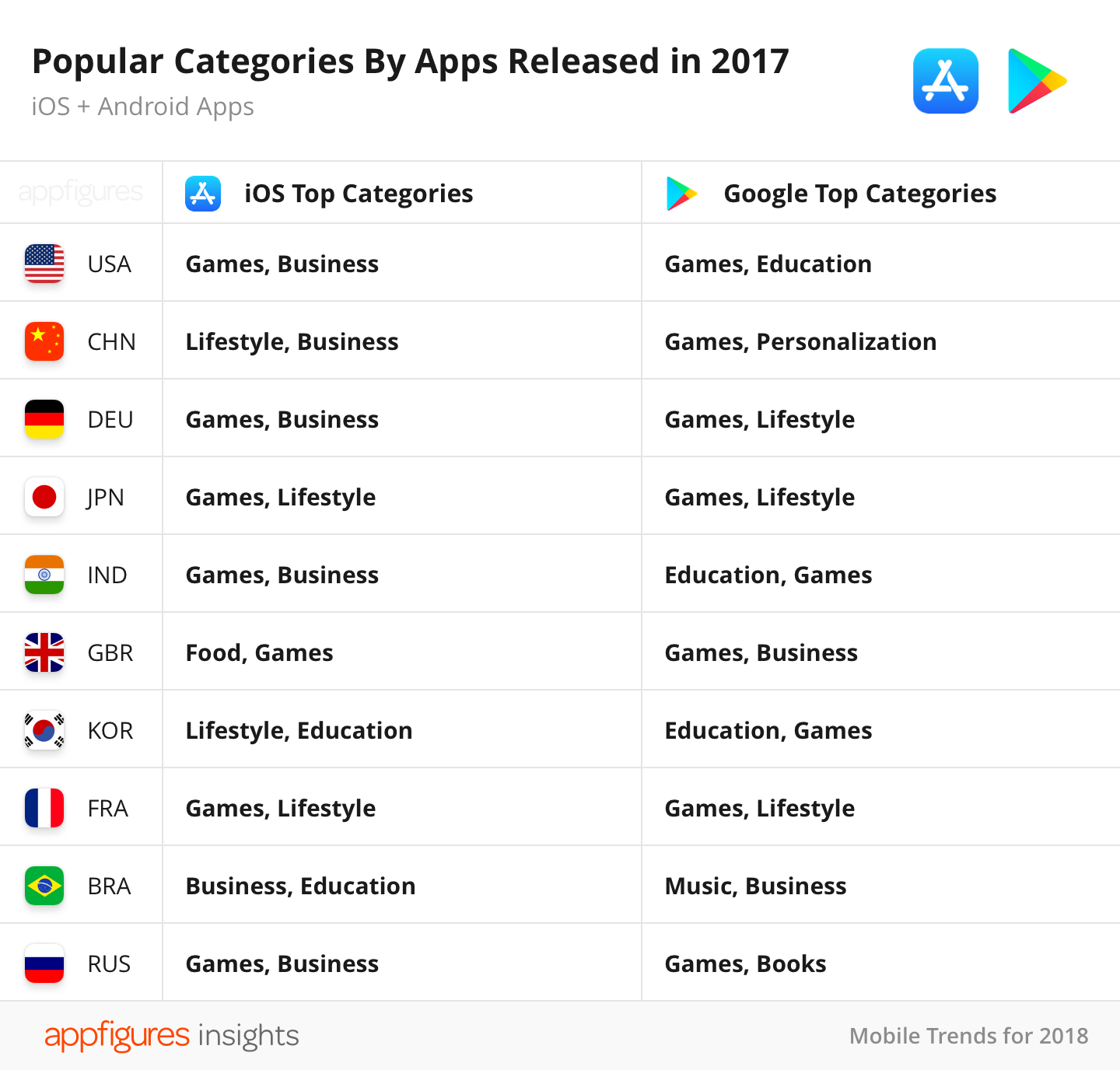 As you might have guessed, games is one of the most popular categories and sees the most new apps. That explains why Apple recently made Games into a top-level category in the App Store and also why Google followed suit just last week.

Games aside, the Business, Lifestyle, and Education categories also saw a busy year across the globe. We expect this trend to continue growing.

Have a question that we didn't answer? Ask it in the comments below or get in touch directly and we'll do our best to answer it with our data.

Non-native apps refer to any app that uses one of the SDKs mentioned in the report. Although they each go about development in a different way, they all offer a way to develop an app/game without needing the platform's main language.

We analyze all free iOS and Android apps, as well as popular paid apps available for download in the US. Data for these SDKs as well as many others is available directly in Explorer.