Even high-popularity keywords can be good opportunities. Why? Because many developers still make the most basic mistakes with their ASO...

Let's have a look at a keyword every app in the top 5 results does incorrectly. Looking at keywords like these is great for two reasons - the first is to learn and the second is because that's what an opportunity looks like.

Let's see if you can spot all the mistakes. 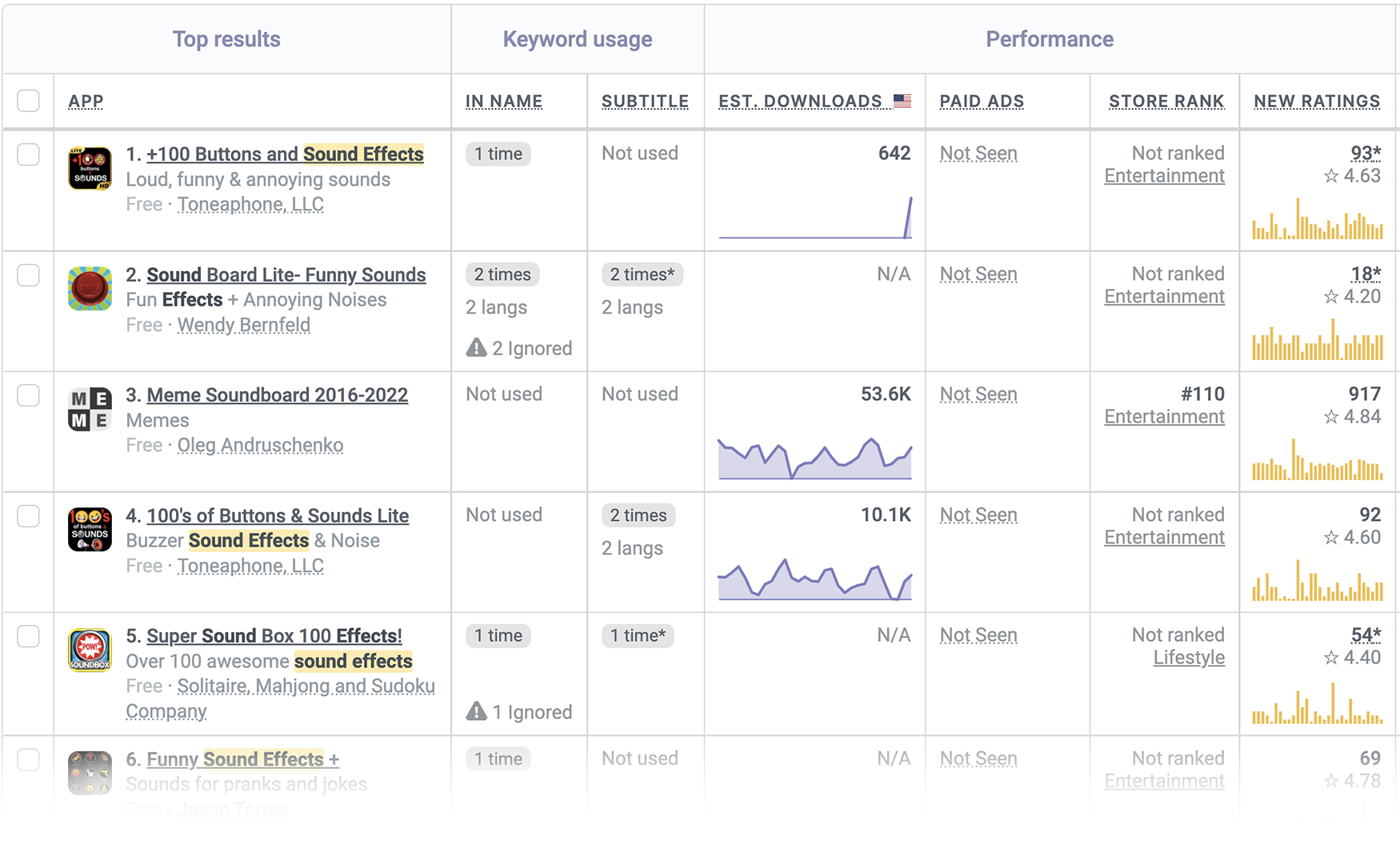 In first place we have +100 Buttons & Sound Effects, which almost does it all right until you look at the subtitle and see it's repeating the word "sounds". If you recall, plurals and singulars of the same word is seen as the same word to the algorithm, so this is duplication and duplication means the algorithm places less value on it.

The reason it's in first place has to do with how many new ratings it's getting + that everyone else messes up more.

Right below it is another brandless attempt at keyword stuffing. Sound Board Lite- Funny Sounds makes a similar mistake to the #1 result by using both "sound" and "sounds", which the algorithm ignores.

Unlike the #1 result, however, this one repeats it in the name so even when it's penalized it loses less. The reason this one is second has to do with the tiny number of new ratings it's getting. About a 5th of the top result.

This app is riding the opportunity wave. Maybe (possibly) by accident.

In third place we have an app with a name and a subtitle I'm sure no one spent more than a few seconds coming up with. Meme Soundboard 2016-2022 with subtitle "Meme", makes more than one mistake so I'm going to have to actually list them:

Also, are the years really that important that a third of all allowed characters are spent on them? I don't think so...

Mistake #1 is the most devastating and why an app with 10x the ratings of the top app isn't ranked first.

But you might be asking, where does this app rank for the keyword "soundboard"? I checked. It's the top result. And before you even ask, the popularity score of "soundboard" is a bit higher, at 46.

So it's technically doing ASO right if we consider it's not targeting "sound effects".

If it used its subtitle correctly it could target both and rank well in both. That's where mistakes #2 and #3 really hurt.

Fourth place result, 100's of Buttons & Sounds Lite which comes from the same developer as the top results and hence the nearly identical name, didn't copy and paste quite right.

And in last place, Super Sound Box 100 Effects! uses the full keyword in the name and then again in the subtitle, totally devaluing it. And with fewer ratings than the other apps making the same mistake, the last place is the best it can get.

I scrolled down the list below the 5th result and for some odd reason I really don't understand, almost all apps have unnecessary repetition in their names.

If you have an app that's relevant to this keyword and you want to grow its download, all you (likely) have to do is remove the repetition.

There's no reason to repeat the same word multiple times in your metadata. The algorithm ignores it + only the last instance is considered. And last = least valuable from the algorithm's standpoint.

Also, when others (aka. competitors) mess up it's an opportunity for you to win by not messing up. You just have to find those opportunities.