This is How Vrbo is Beating Airbnb

App Store Optimization isn't just a "game" indies play. Brands, big brands, use ASO to get more visibility as well and have pretty much the same tools all other devs have, big and small, to compete.

In a way, ASO is a normalizer.

Here's a quick example that shows how Airbnb, undoubtedly the biggest name in its field, is losing ground to a new(ish) rival for a somewhat popular keyword.

Airbnb has a major rival that's doing a lot to gain visibility. That's Vrbo. In addition to spending a bunch on ads, Vrbo is also using App Store Optimization to get visibility on the App Store, and it works!

Let's analyze this keyword to see why it's working for Vrbo but isn't for Airbnb. 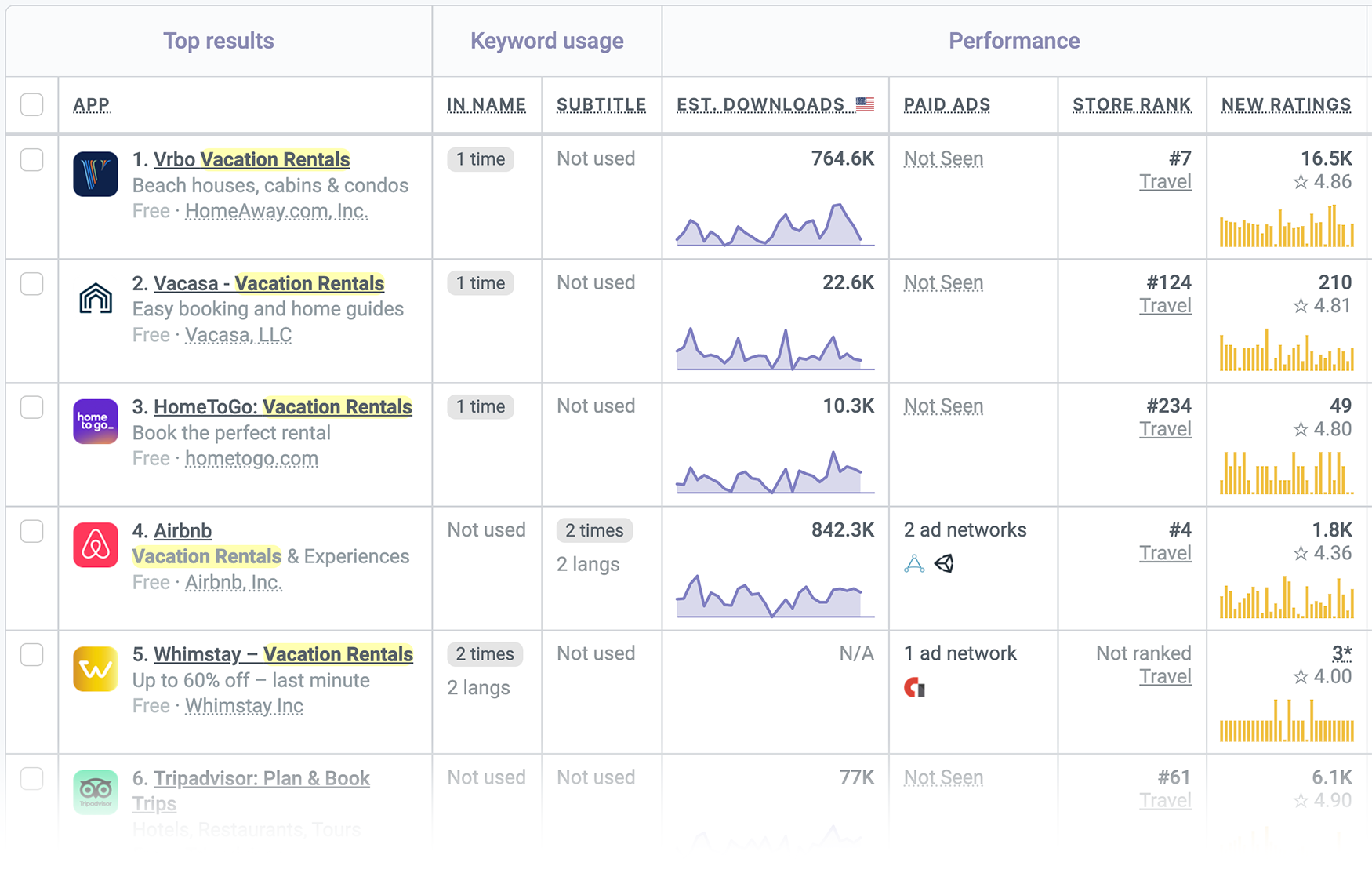 Surprise surprise! Vrbo is the first result for this 30+ popularity keyword. Why? If this isn't your first Keyword Teardown you already know the answer -- The keyword is right in the name + Vrbo gets a lot of new ratings. That's the formula for getting visibility.

Below Vrbo is Vacasa, a smaller rival in terms of downloads, that gets to the second place with only a handful of new ratings because it uses the keyword in its name while others aren't.

The ratings coverage, meaning the number of new downloads it takes to earn one rating, here is abismal! While it probably won't help get Vacasa up a spot, not even trying to get new ratings, which is what I'd guess is happening here, is a huge missed opportunity for Vacasa and a potential opportunity for a competitor.

The same can be said about the next result down, HomeToGo, which gets even fewer ratings, under 100/mo. with more than 10K estimated downloads. This one's a bigger missed opportunity though because HomeToGo could easily get more ratings than Vacasa and switch up a spot.

That would be big for HomeToGo, and really easy...

In fourth place we have the app we've all been waiting for -- Airbnb. That's right, the most popular app of the bunch is 4th.

Why? Easy, Airbnb isn't using the keyword in its name but rather its subtitle. And we know that the subtitle is a weaker signal for the algorithm already, so it really can't get any higher than where it is.

Another issue Airbnb has is a very low ratings coverage. With 840,000 estimated downloads, you'd expect more than 1,000 people would rate the app if asked at the right time. With an app like Aribnb, finding the right time is pretty easy -- do it.

I talked about finding the best time to ask for a rating in a recent AF Chat that's worth a watch.

Bad keyword strategy + not enough ratings = ASO disaster! The good news is that both are very easy to fix, or at least should be. And with so many downloads, Airbnb can become the top result very quickly. If it tried.

And to make this list even funkier (not the good kind), in last place we have Whimstay, which got just 3 new ratings in the last month and isn't popular enough for us to estimate its downloads meaning they're very low.

It snuck into this list by having the keyword in its name and not duplicating it anywhere. It'd beat Airbnb if it had just a tad more ratings -- low/mid two digits.

Important: The Thing About Focus

One important thing to keep in mind when looking at Vrbo's ASO strategy is focus. The app's name focuses on a single keyword, vacation rentals, which when combined with the new ratings, earns it the top spot.

Well, yes and no and maybe. My favorite answer.

Yes - Focusing is a good way to "put your best foot forward" for important keywords. In some cases, everyone's doing it so you have to, but in others you're the only one winning with that strategy.

No - Focusing on a single keyword means you can't give the algorithm more signals to rank your app in more places, making it harder to gain visibility from searches not for that keyword.

Maybe - In ASO a lot of what you have to do and what you should do depends on the competitive landscape. You have to know who the algorithm considers to be a competitor and what those competitors are doing. That's how you can come up with a strategy to get ahead. Your strategy may require focus (probably) but may also work better by targeting many combinations.