We'll kick off this Keyword Teardown with a keyword that's somewhat related to games. In the last Keyword teardown, we looked at its close relative, Poker, so this should fit the same rules. But, does it? 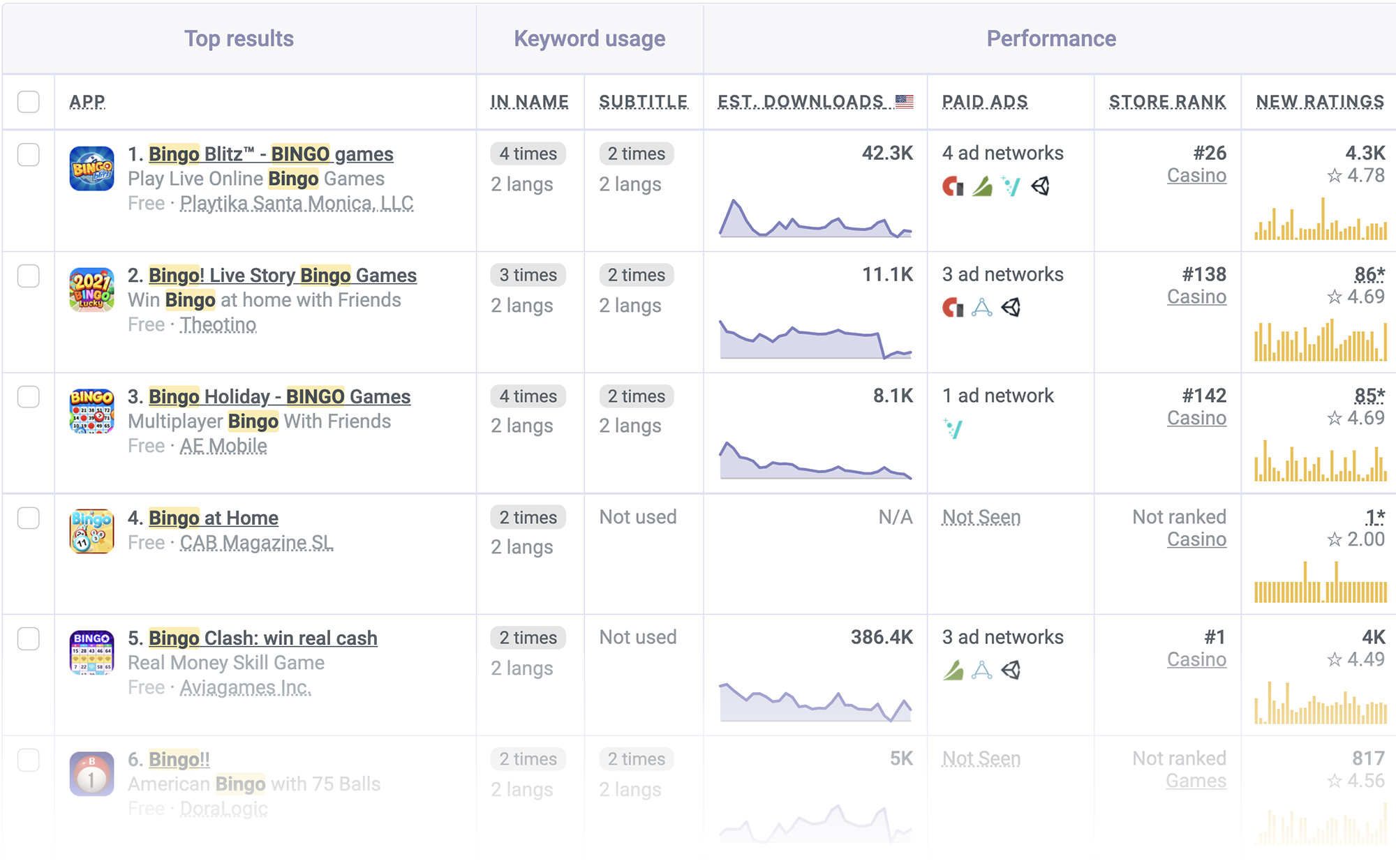 At first glance, this set of results almost makes sense. The top app has almost the most downloads, the second and third follow, but then we come across #4, which has terrible performance and barely any ratings. Skip it quickly, and you'll land on the top app in the category. That's right. The most downloaded app is sitting 5th. Why?!?!?!?

But let's start at the top. Bingo Blitz™ leads in downloads, ratings, but... it repeats the main keyword too often and devalues it entirely by placing it in the middle of its subtitle. Lucky for it however, its competitors follow the same terrible pattern, so its performance gives it the upper hand.

If Bingo! or Bingo Holiday remove the duplication, they should be able to eclipse it, even though they have far fewer downloads and nearly no ratings. That last one could be an issue, so if you're the developers behind either app, remove your duplication and aim to get your users to rate the app. You're welcome.

Now to the weirdness lower down in ranks 4 and 5. Bingo at Home, the #4 result, has so few downloads that our AI can't estimate them, and that's supported by only a single new rating in the last 30 days. Obviously, it's not getting much love. In #5, we have the category leader with 386K estimated downloads and 4K new ratings in the last 30 days.

How is it possible that the app with the most downloads and almost the most ratings isn't #1, or even #2, or 3 or 4? That has to do with one little tiny detail that's missing from the screenshot above (but is visible in Inspector), and that's its age. Bingo Clash is very young, just about a year old. Its competitors are much older, ranging from 3 to 9 years. That makes a difference.

So what do you do as a new entrant? Focus! We already know that focus beats performance, and if I had to optimize Bingo Clash, that's exactly what I'd do.

FYI - There might be something with Apple pushing apps that mention "cash" in their name down the ranks artificially. I can't prove it so I'm just putting it out there. If you're using the keyword or were considering adding it, I'd suggest against it.

Moving away from games to business apps, we have another fairly popular and very competitive keyword. 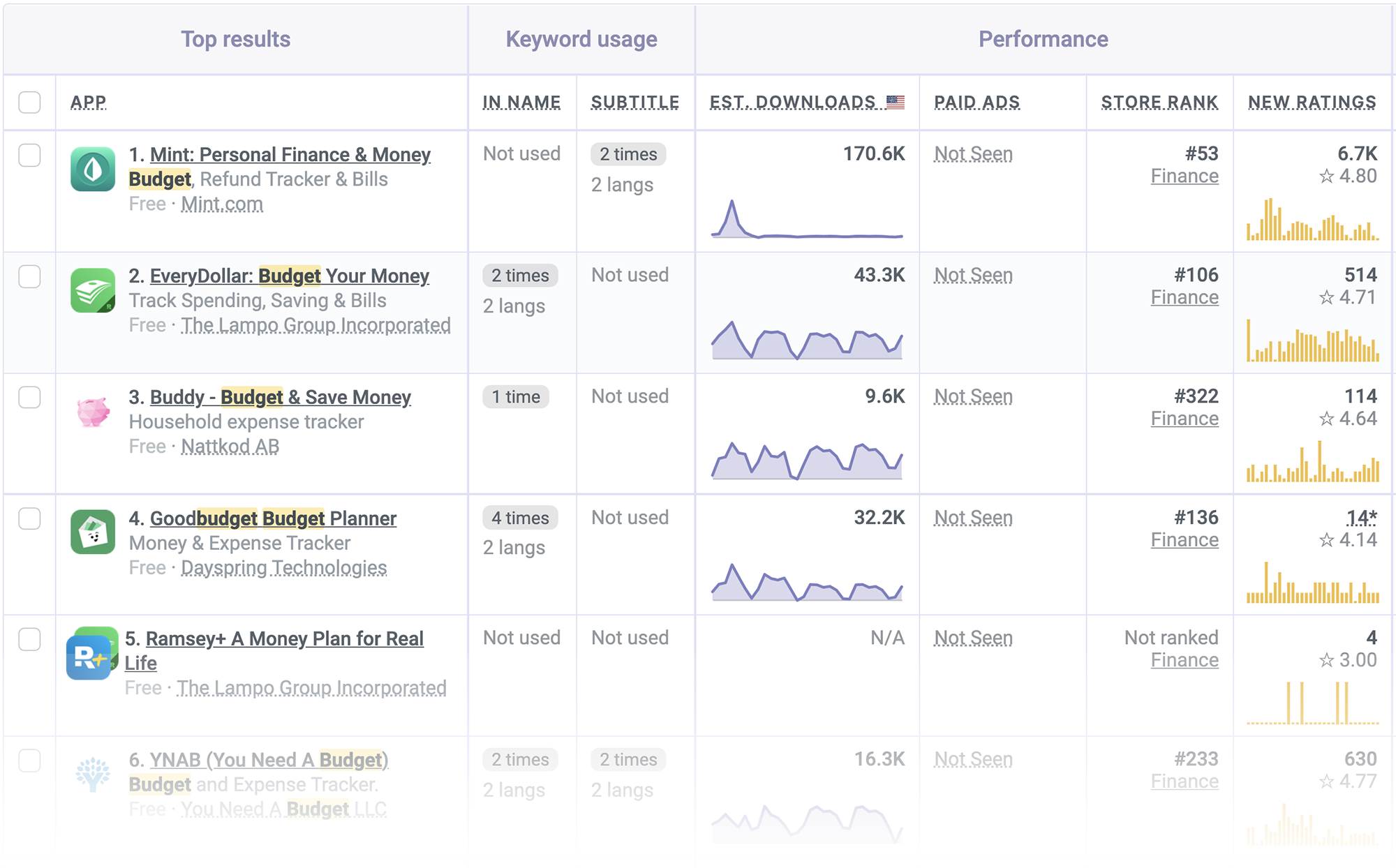 At first glance, the sorting here follows what we'd expect, for the most part. Are you starting to see the pattern here? First, second, and third place make sense. The rest, much less so. Well, this one's got another twist for you.

Mint, at #1, takes the lead by having the most downloads and ratings, even though it's using the keyword in a not-so-great way. I've talked a lot about placement and how it trumps performance, but that's when they're close. In this case, the number of new ratings is an order of magnitude lower when you go from first to second place.

Second, third, and fourth places use keywords fairly similarly, so the algorithm has to rely on ratings to sort them, and they're indeed sorted by ratings.

Pro tip: Ask your existing users to rate your app. There are many ways to do it, but the key is to do it.

Now on to the fifth place, which isn't an app! In #5 we have an app bundle, a rare sight on the App Store and in search results. Its icon isn't pretty, and it has no performance data, making it very hard to understand and analyze.

To keep things simple, look at the developer -- The Lampo Group -- the same developer of the #2 app, and that app is indeed the star of the bundle. While taking the #2 and #5 spots seems great, bundles aren't as attractive these days, where most apps are free, and the "bulk" discount aspect of bundles isn't really sexy.

We've yet to come across any other bundles, and that's over the last four Keyword Teardowns, so the answer to whether you should spend time on creating a bundle is probably no. But, keep an eye out for them. 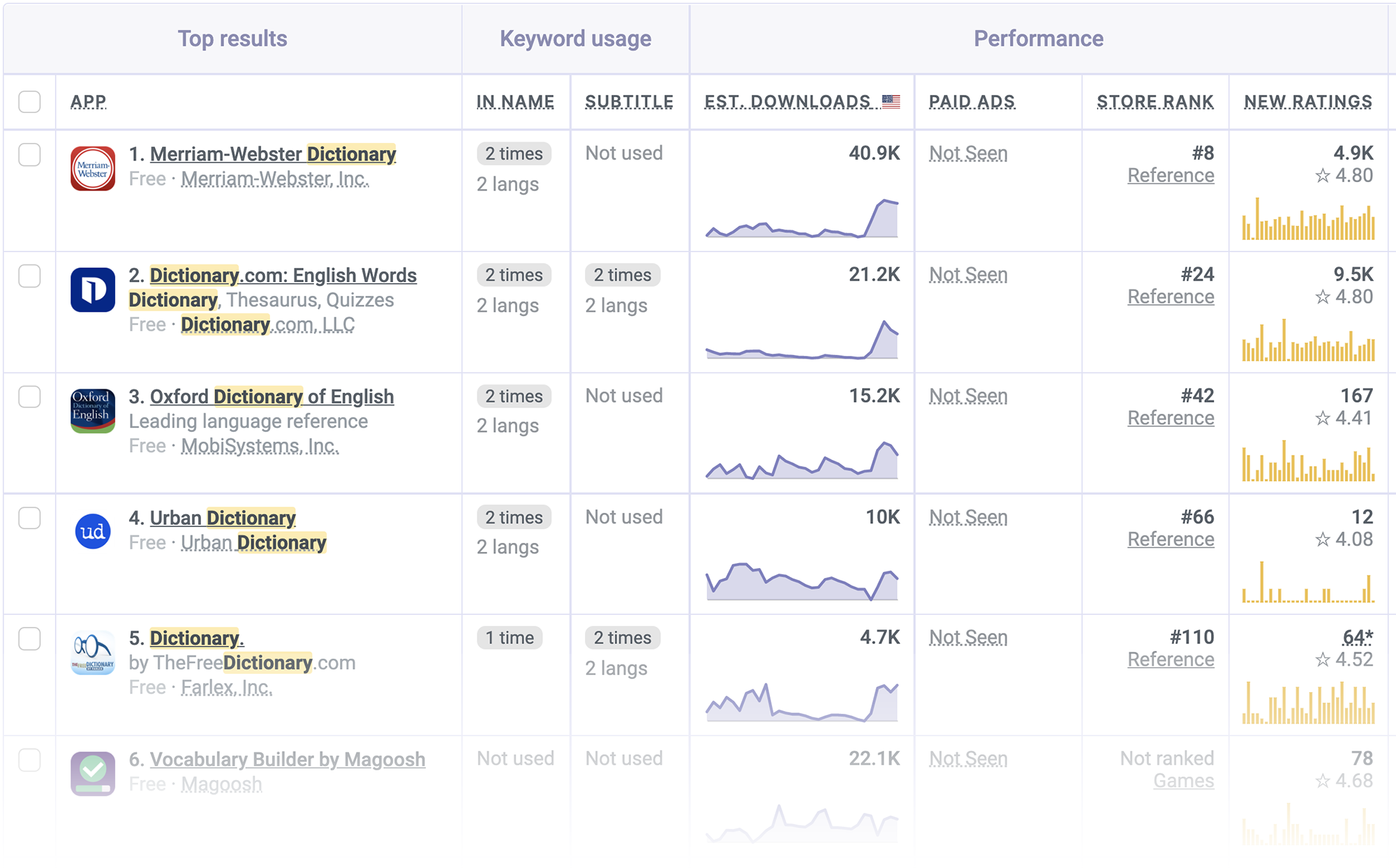 How to Turn This Wisdom into Downloads

Now that you've seen how the algorithm works in the wild, you can use the insights to improve your keyword optimization by updating the name, subtitle, and keyword list of your mobile app or game.

Every category is a little bit different, and the best way to grow is by experimenting. Try what you've learned here today and [track the results] for a few weeks to see how it impacts page views and downloads. If it's helping, zoom in and refine. If it isn't, undo.

That's the best approach to grow your downloads organically.

This is a measure of how many searches the keyword receives on a monthly basis but normalized to a scale of 5 - 100, where the most searches get 100, and none/barely any get a 5. Because it's normalized, the actual values sit on an exponential curve, which means a 10 isn't half of 20 but actually less.

This is a measure of how strong the apps that are currently at the top 10 results are, on a scale of 1 - 100, where 1 means not at all and 100 means extremely tough. The algorithm we created looks at the same performance metrics as Apple's and Google's algorithms do. Smaller is better here, but much like the popularity score, you should only look at it in the context of keywords that are relevant to your app or game.

This isn't exactly a score but rather the number of apps the algorithm will return for the keyword. Most users wouldn't look past the first five or ten, but when optimizing, we can use this number to gauge the difficulty of ranking. Less is good in this case.

What does optimizing for the most popular keyword in the App Store look like?