App Teardown: Slotomania™ Knows How to Monetize Every Single Download 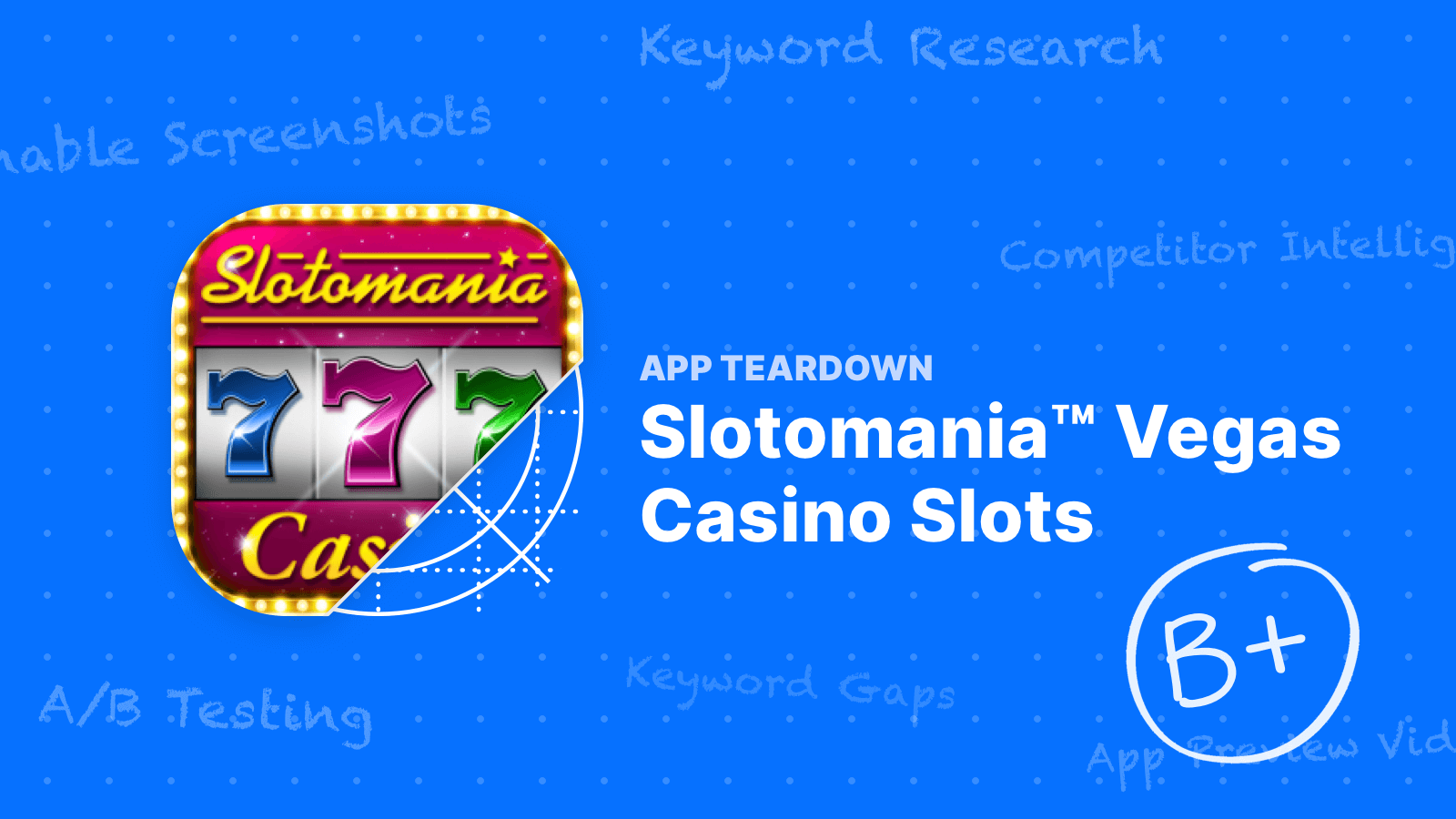 Slot machines have a certain charm that enchants many both in real life and on mobile devices. But while casino games don't seem to lead in downloads, unlike most other games, what they get out of each download is much higher, making them a very lucrative business.

In this Teardown, we're going to look at Slotomania™ Vegas Casino Slots, the #1 casino game in the U.S. App Store.

Overall, Slotomania™ Vegas Casino Slots gets a B+. There are some issues...

Slotomania™ by the Numbers

When you look at the numbers, casino games look a lot more like money printers, and as the leader of its category, Slotomania™ is definitely doing something right. Here's how it's performing in the U.S. App Store, based on our Competitor Intelligence:

As with every attractive business, competition comes quickly, and that's the case for Slotomania™. There are more than 1,500 casino games in the App Store right now, according to Explorer. Although not all are popular, having so many games that do pretty much the same thing can make discovery hard.

Slotomania™ is the category leader. Let's compare it to the casino games that are right below it:

Notice how all five games have pretty similar vitals? Their downloads are very close, and so is their revenue. Looking over their audience demographics, that also makes sense.

2020 has been a strange year for games. Some have seen all-time highs, other all-time lows. Slotomania™ seems to be somewhere in the middle. 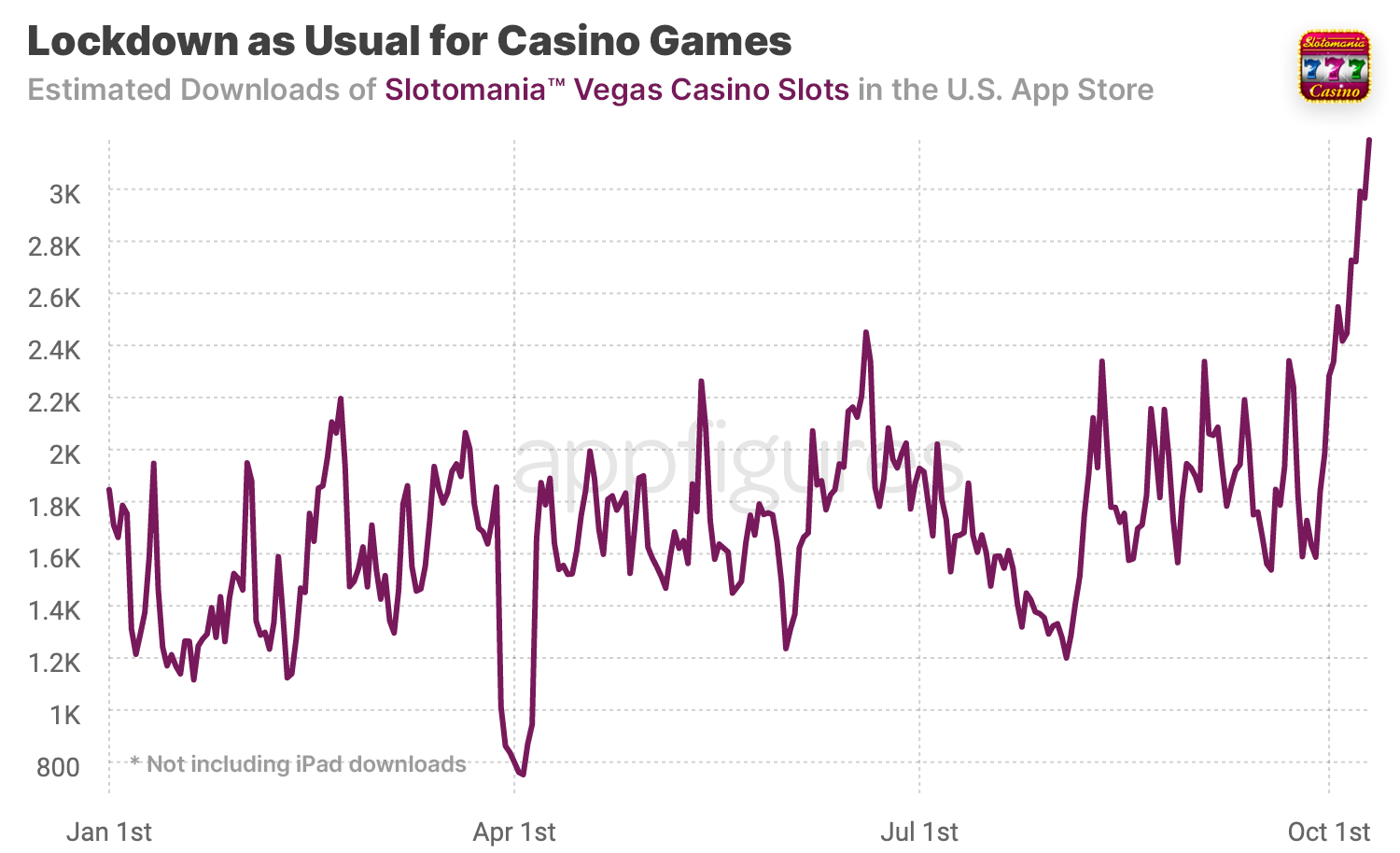 Downloads have remained pretty flat throughout the spring and summer. Considering the number of people who have more free time on their hands, this is a bit unexpected. But it's better than what happened to revenue. 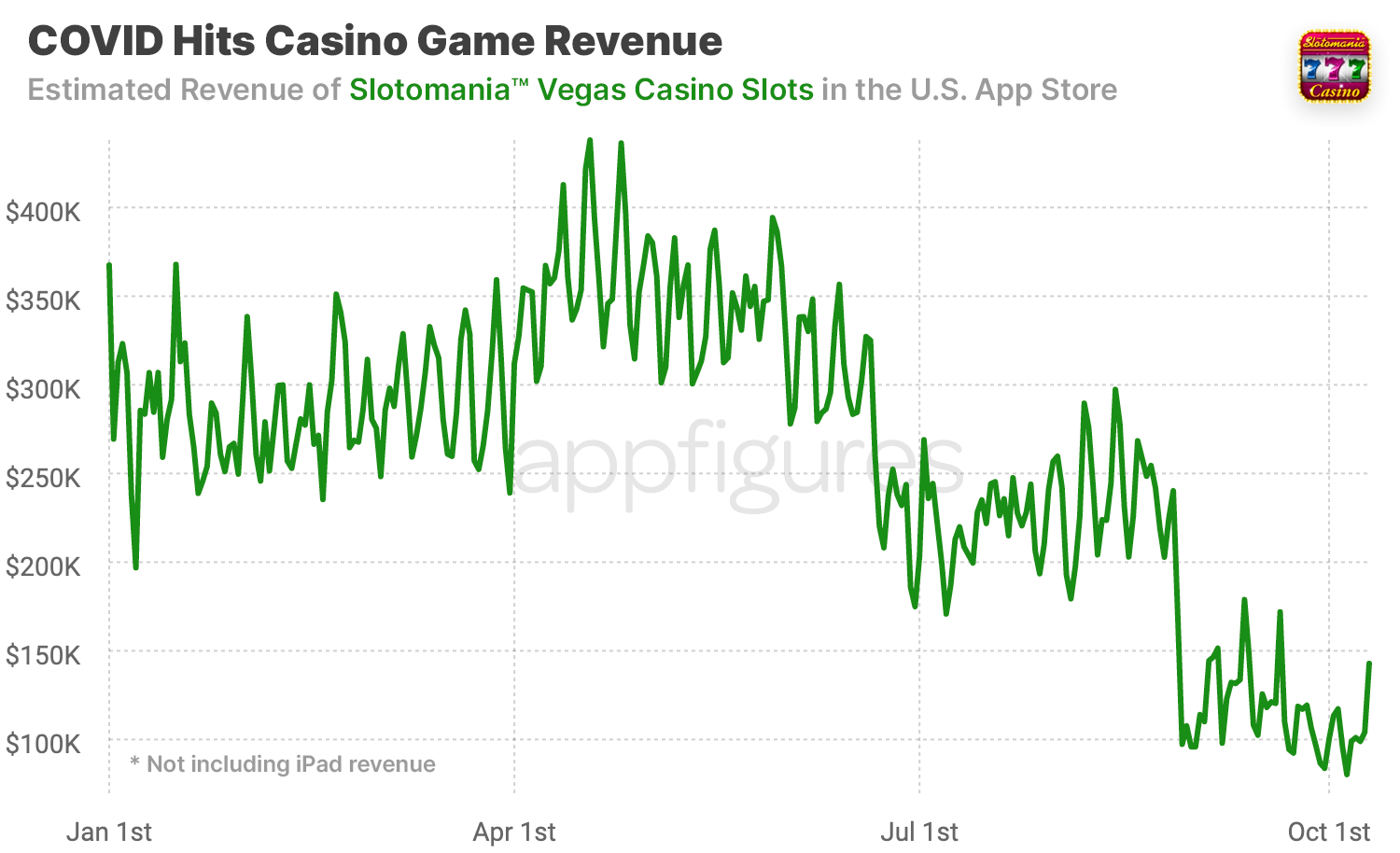 More free time, for some, means less disposable income. While revenue initially rose early into lockdowns, it has since dropped significantly as the economic situation hasn't improved for many. This trend isn't unique to Slotomania™, but it has seen the sharpest fall so far this year of all competitors.

Let's kick off the analysis with the keywords Slotomania™ is using in its name and subtitle. Those send the strongest signals to the App Store's algorithm.

This name and subtitle combo yields 49 keywords! Some are popular, but most aren't, making what started as a pretty broad set seem a lot more focused now.

Let's take a look at where Slotomania™ is ranked for these keywords: 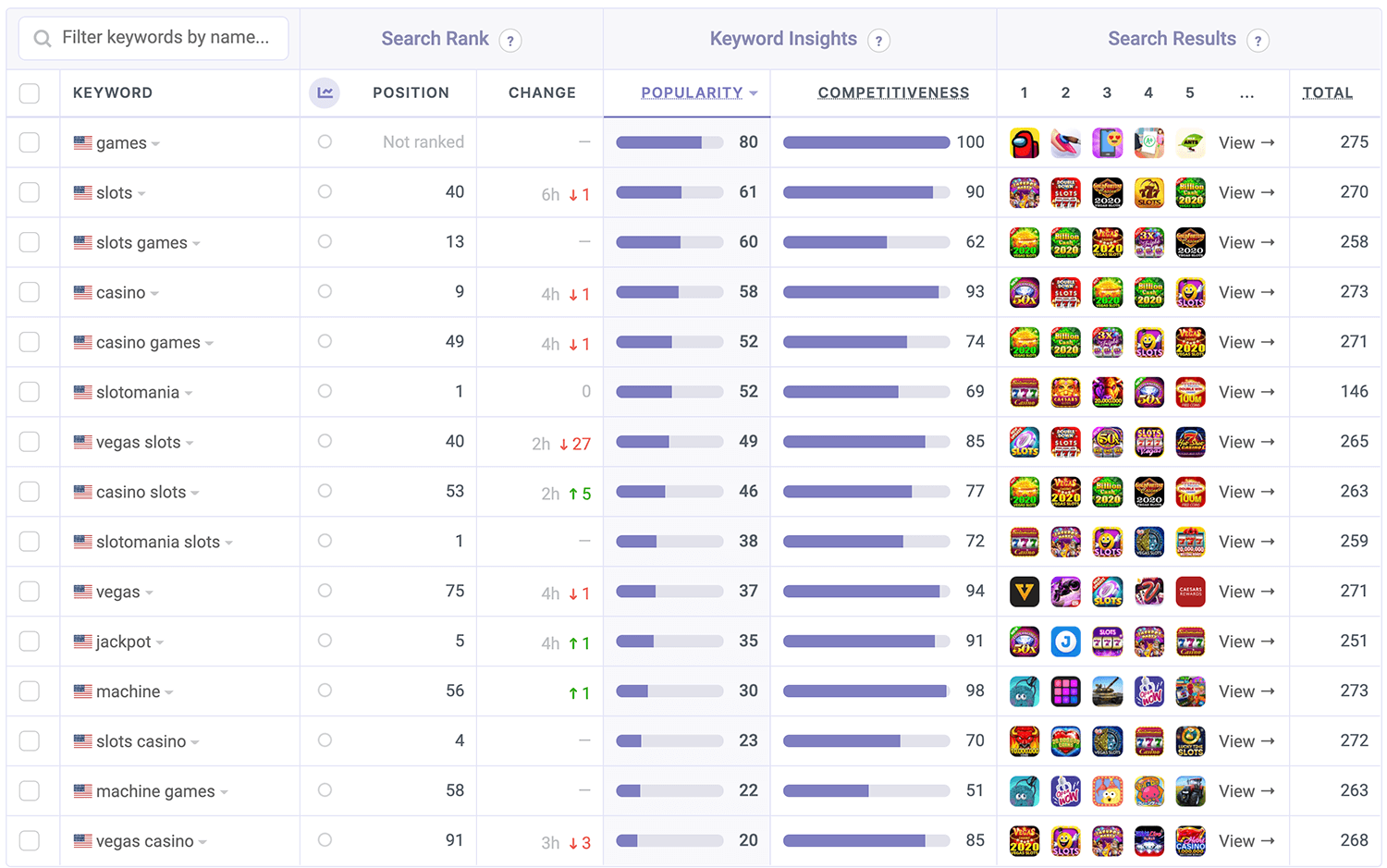 There's good and there's bad here. The name and subtitle aren't really optimized, with duplication and mention of a stop word. In addition, it seems like the algorithm hasn't associated too many of these keywords with the game, so even though it has many downloads, it isn't ranking all that well in most of these keywords.

I promised a good - "Slotomania" as a keyword has a very high popularity. Branded keywords are a hit or miss for ASO and depend a lot on how much the app is investing in paid ads. In this case, that seems to be how Slotomania™ gets enough downloads to be the #1 casino game, and we can see it's advertising across a variety of ad networks, including Google Ads, Unity Ads, and several others.

This was a hard one to crack, primarily because there just isn't a lot to go off of. Slotomania™ doesn't seem to be ranking in all that many keywords that they aren't targeting.

Except for competitor names, which is a common (but lazy) strategy we see all too often, which may work for Apple Search Ads campaigns but much less so organic ASO.

Where Else is Slotomania™ Ranking?

This combo of name, subtitle, and keyword list gives Slotomania™ a bit more than just the name and subtitle alone. Here are some of the highlights:

This list isn't very long but fits with what we believe the keyword list is—focused on competitors instead of long-tail. Why? One possibility is that the long-tail doesn't have enough popular keywords Slotomania can leverage. Another is that Slotomania's focus isn't on organic growth, so the keyword list took a back seat.

Whether organic ASO has enough traffic or not, I prefer to have it all before saying there isn't enough. Wouldn't you? 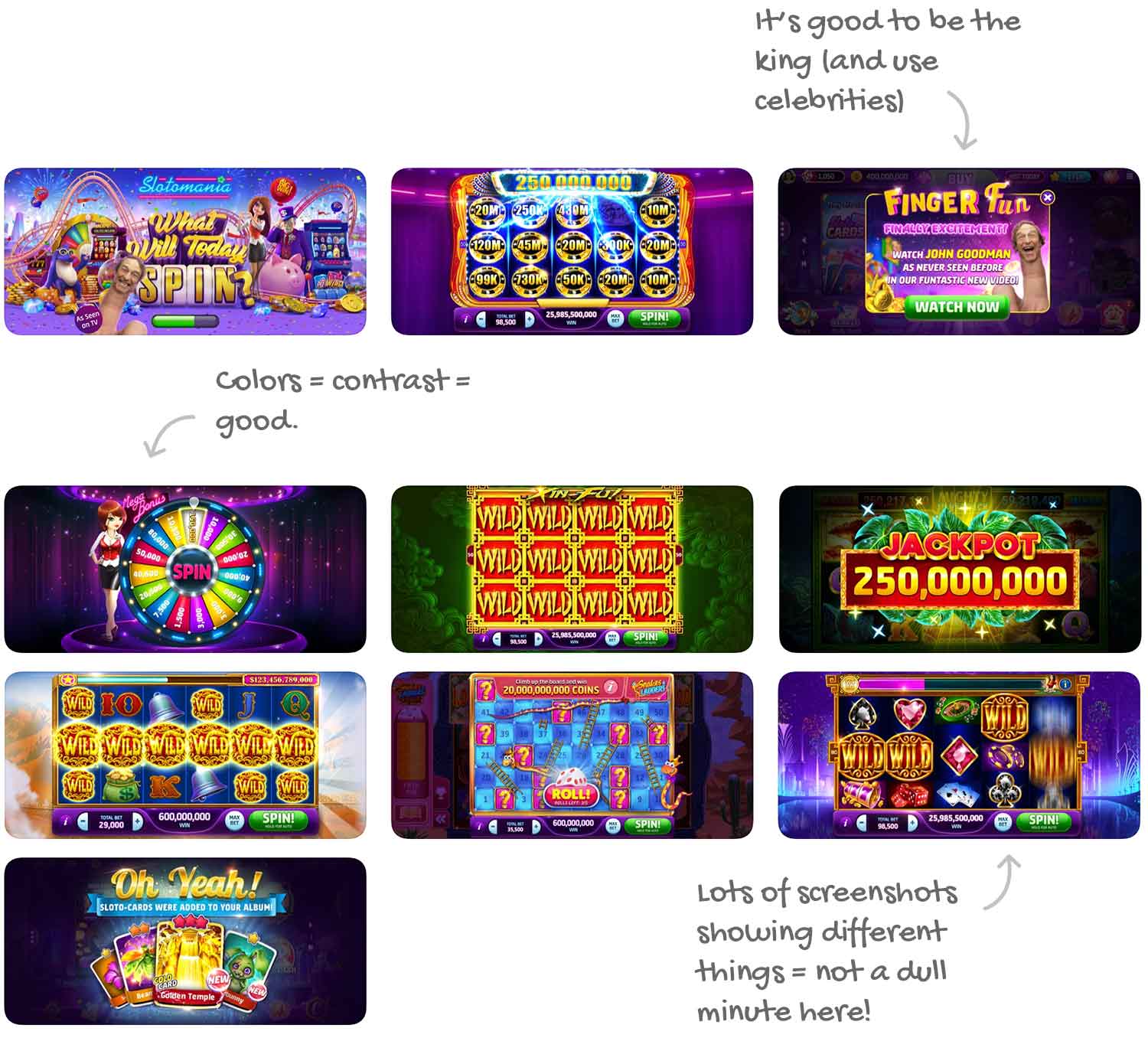 It's really great to see an app that takes advantage of all ten screenshots!

While this screenshot set isn't something to write home about, it's also not terrible. The game is landscape and so are the screenshots. They're vibrant and colorful, focused on gameplay (aka. what you'll get), and do a fair job showing that there's never a dull moment in this game.

I have a good feeling these screenshots were carefully A/B tested. I do wonder if captions were AB tested and lost, or never tried at all. If not, that seems like a missed opportunity given most casino games look very similar these days.

Yes! The folks at Playtika took the time to create an App Preview. I hope this trend will catch on.

The video, like the screenshots, is landscape and shows off gameplay. No captions, no non-game content, just gameplay (and game audio).

Although any video is likely better than no video, showing the game in action without at least explaining what's going on feels like a wasted opportunity. Sure, some players may know what a casino game should be like, but what about the rest of us?

Slotomania™ gets downloads and does a great job turning those downloads into revenue, but those downloads don't come cheap. Paid user acquisition (aka. paid ads) work well for casino games because they're very efficient at extracting revenue, but given that equation, ASO starts to look extremely lucrative.

To that end, Slotomania™ can be doing more to improve its keyword optimization and get an immediate boost from those paid ads. A little bit of research can go a long way here.

If they don't capitalize on ASO, they'll have very little breathing room for organic growth and will have to rely on paid ads while the competition earns organic traffic.

The download and revenue figures used in this teardown are based on our estimates.