This Week in Apps #23 - School, Dating, Real Estate, and more

Schools are back online, and that's pushed two educational apps into the top charts this week. Remind and Canvas Student broke the Top 25 app list in the U.S. App Store and on Google Play.

Both apps have seen an increase of roughly 10x vs. July, each hitting an estimated 85K downloads per day across both stores in the US. 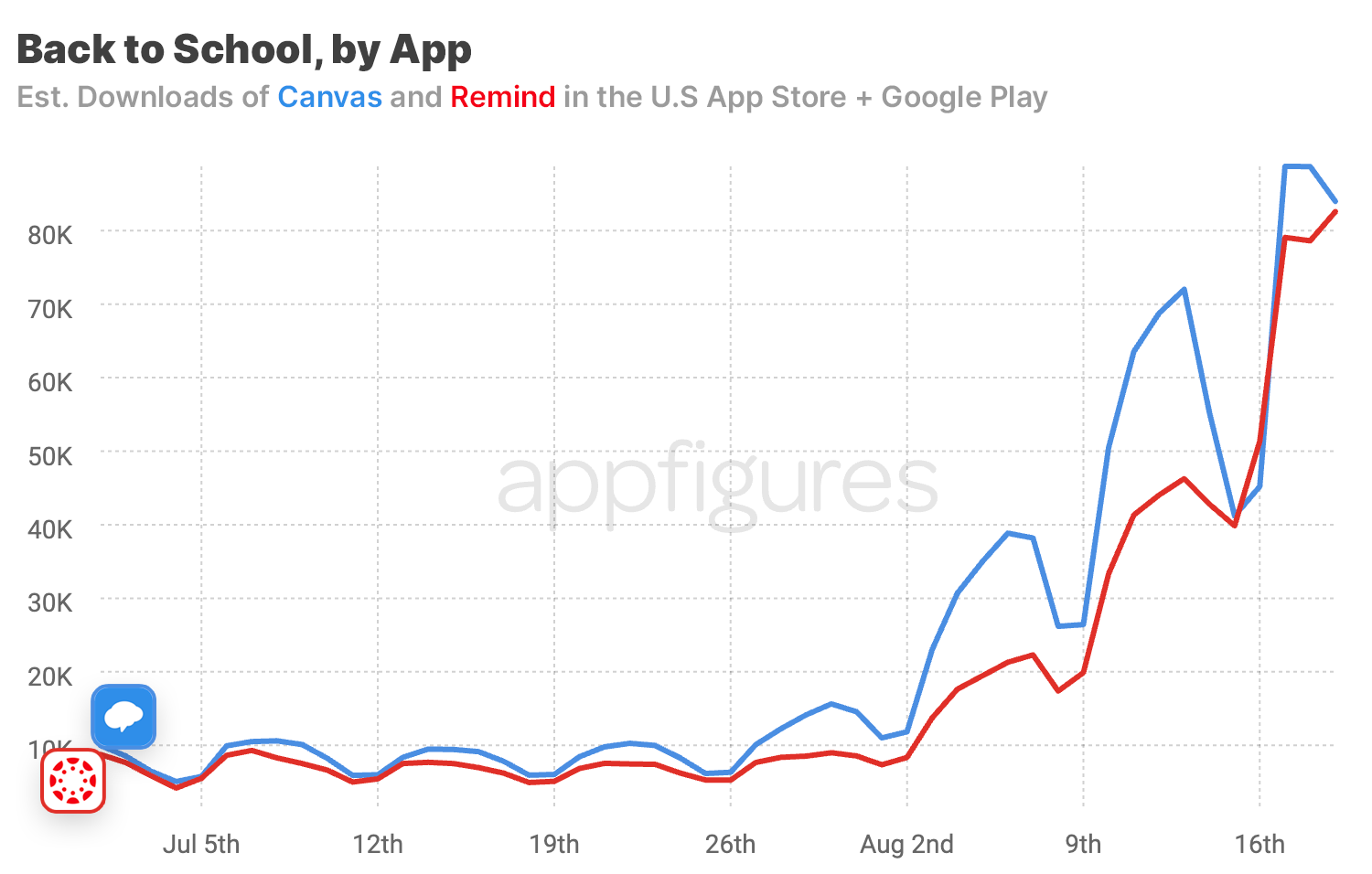 Downloads of Zillow, an app for finding houses and apartments for sale and rent, have hit a new all-time high last week with an estimated 298K downloads for the week. A 17% increase from their previous all-time high of 256K weekly downloads, in early May of this year. 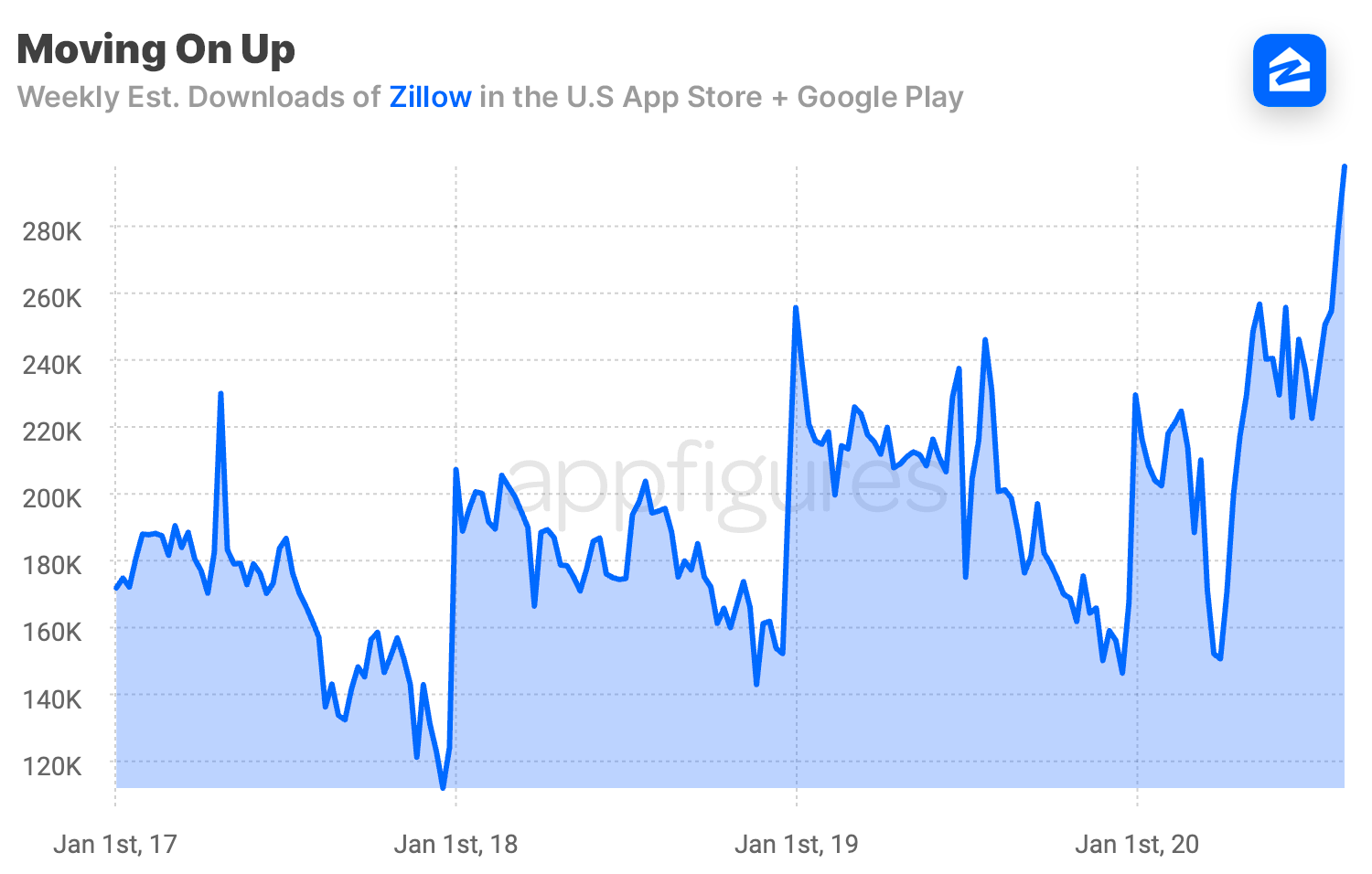 Dating in lockdown is tough, but not impossible. Just like Hinge, another dating app has shown that, and it's Plenty of Fish. 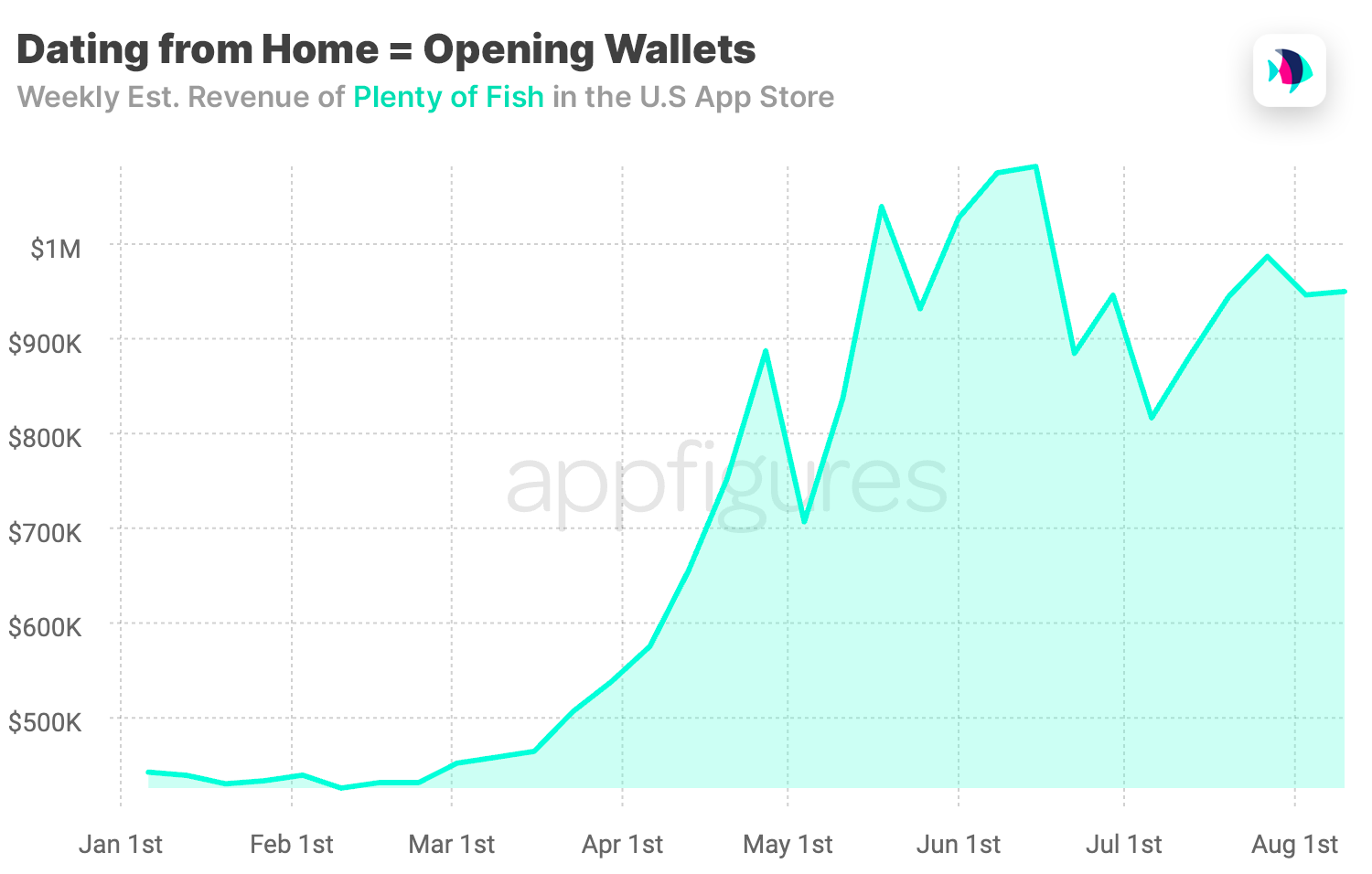 The state of Virginia has released a new contact tracing app built with Apple's and Google's Exposure notification API. So far, it's one of the few apps to leverage the API in the U.S. after seeing good adoption in Italy.

Several other states have released their own apps or will be soon. Which begs the question, why is there nothing at the country level 🤷🏻‍♂️ 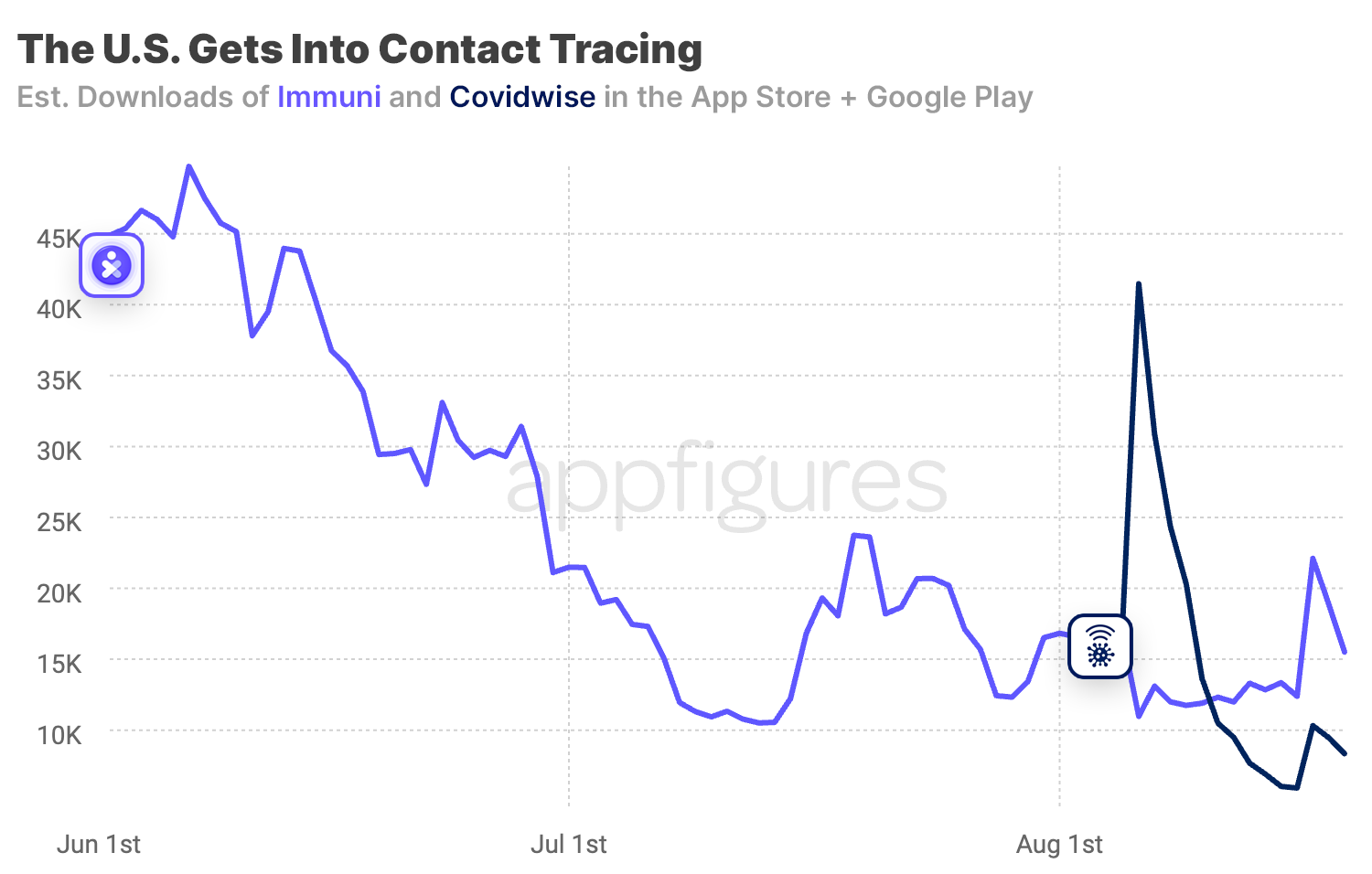 Although I want to, we can't ignore the Epic/Apple battle that's still raging. We looked at Epic's revenue loss, but here's a different angle—Market dominance.

Looking at our app intelligence in the U.S. for 2020, we can clearly see Epic taking over PUBG in downloads around April and hasn't looked back since.

Download-wise, Fortnite started with a 5x lead netting over 600K estimated downloads vs. PUBG's 185K for the week of April 20th. The lead has since shrunk to roughly 2x before Fortnite was removed from the App Store and Google Play last week.

Fun fact: Both Fortnite and PUBG use Epic's Unreal Engine, which may suffer from this battle. 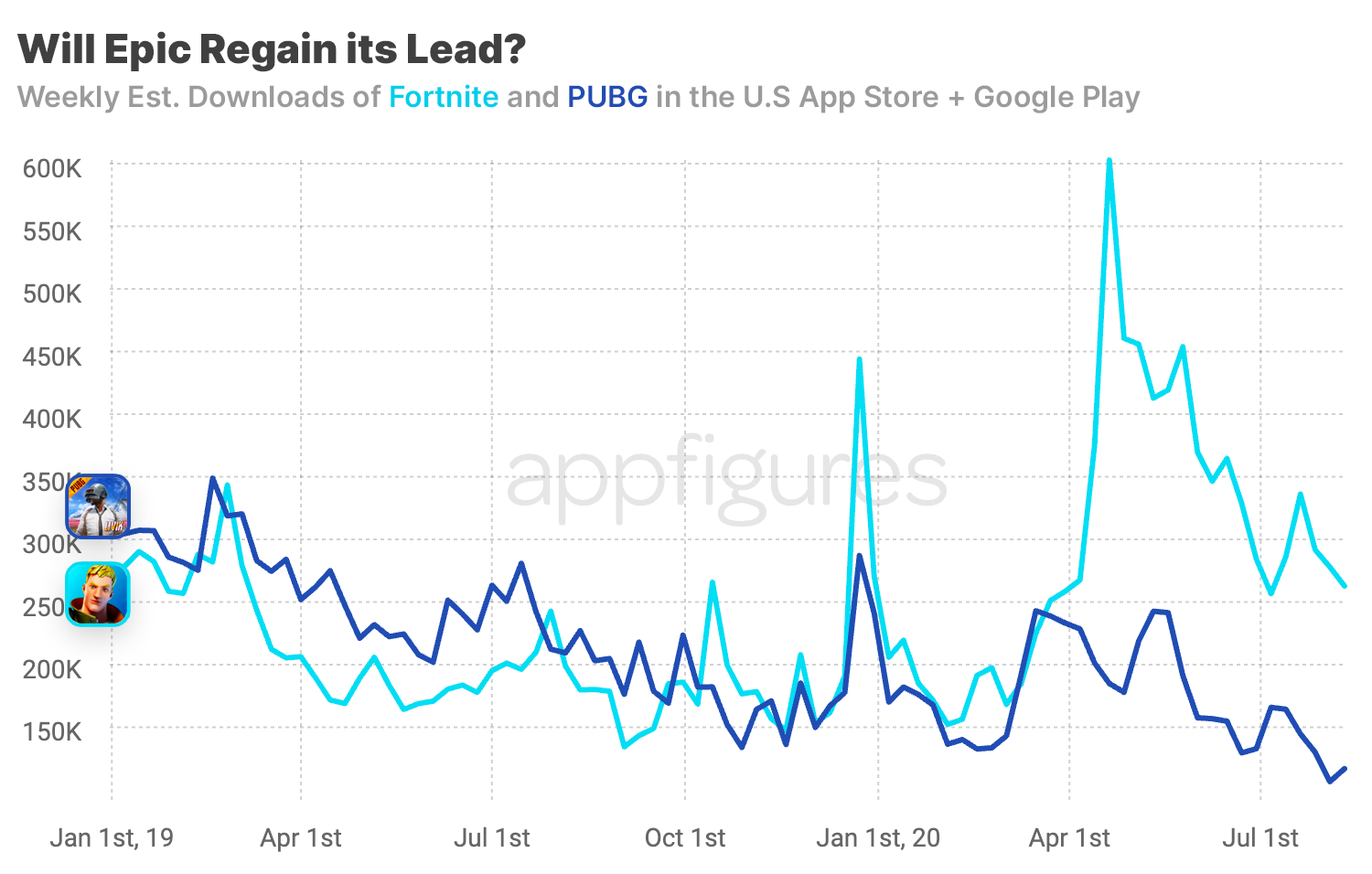