The clock is ticking for TikTok in the U.S., but that's not slowing down its growth. On Android, TikTok's revenue has grown by more than 500% since January, from an estimated $53K per week to just over $322K last week.

Android revenue is also closing the gap on iOS revenue. Android in-app purchases made up 10% of TikTok's mobile revenue in the U.S. in January and is up to 27% now. 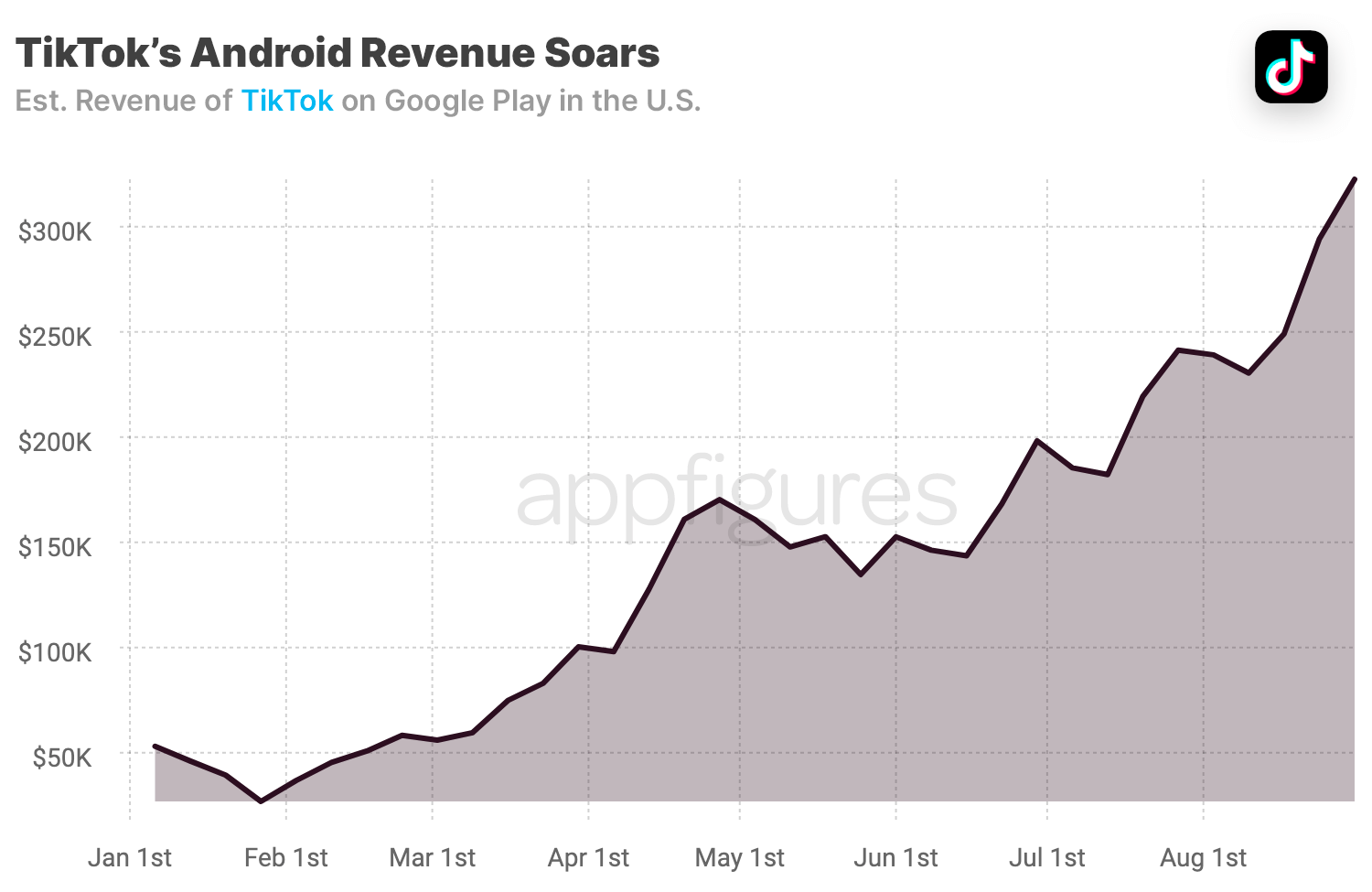 That's 1,651% more downloads! The growth comes as a result of the game's popularity skyrocketing on Twitch, which peaked at 400,000 concurrent views, as reported by Kotaku. 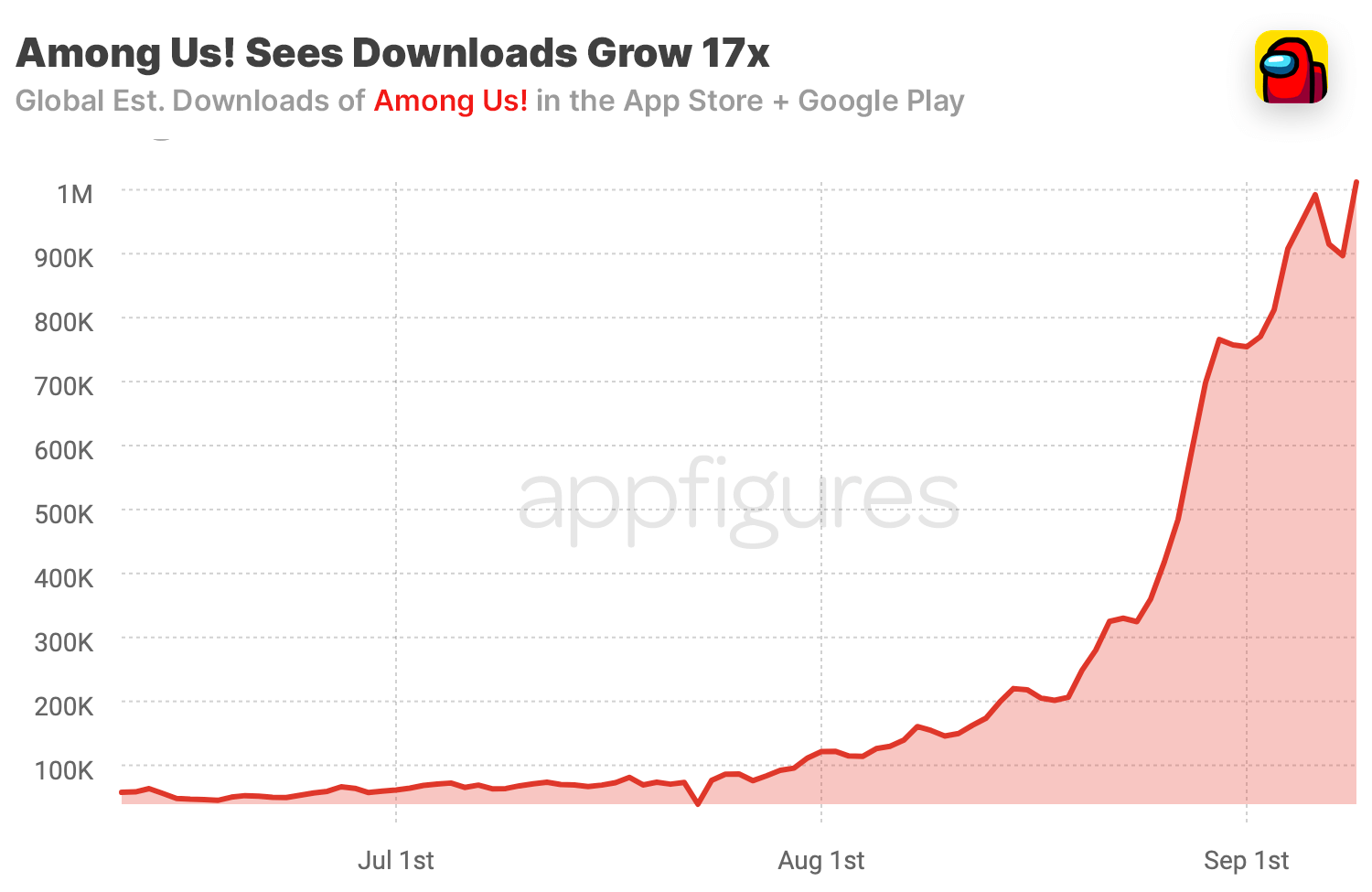 My new(ish) favorite mode of inner-city transportation is continuing to show good signs of a healthy recovery. After shutting their services down, Lime and Bird, the most popular scooter rental services, have been seeing a steady increase in new users.

Both apps saw downloads grow by a factor of 10 since "re-opening." Lime added an estimated 3.9M new users since May, and Bird added 2.6M new users in the same period.

While these figures are lower than last year's summer spike, considering many still work from home or would rather not touch a communal scooter, these numbers are very healthy. 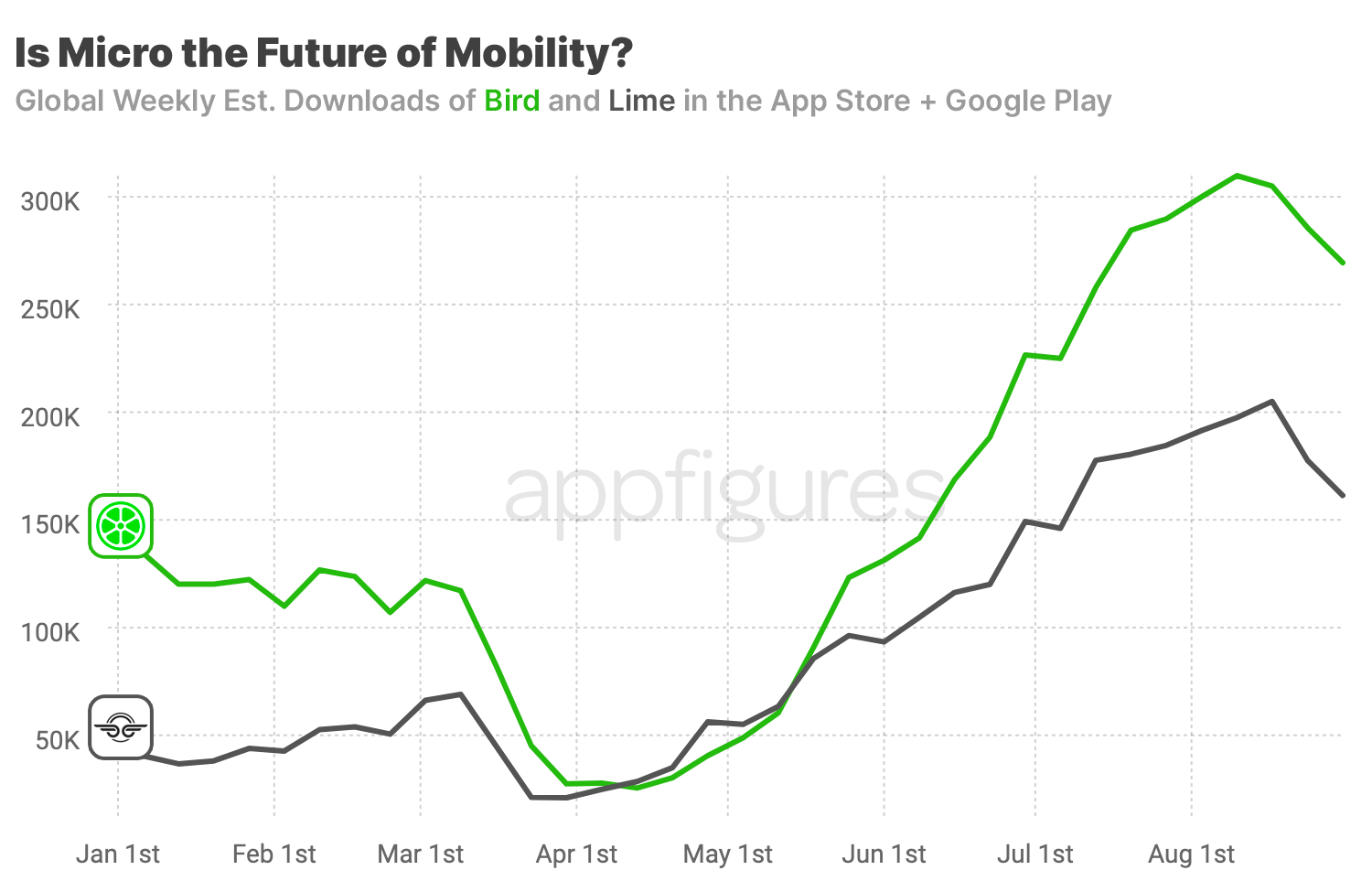 A new all-time high for Google

Working from home has also been kind to Google, which saw the most downloads in a single day for Google Slides. The PowerPoint vs. Keynote fight usually ignores Google Slides altogether, but that could be changing as Slides' collaboration functionality is much simpler. Its features are simpler as well, but that can change.

On Wednesday, Google Slides was downloaded by about 72K new users this Wednesday in the App Store globally, according to our Competitor Intelligence. 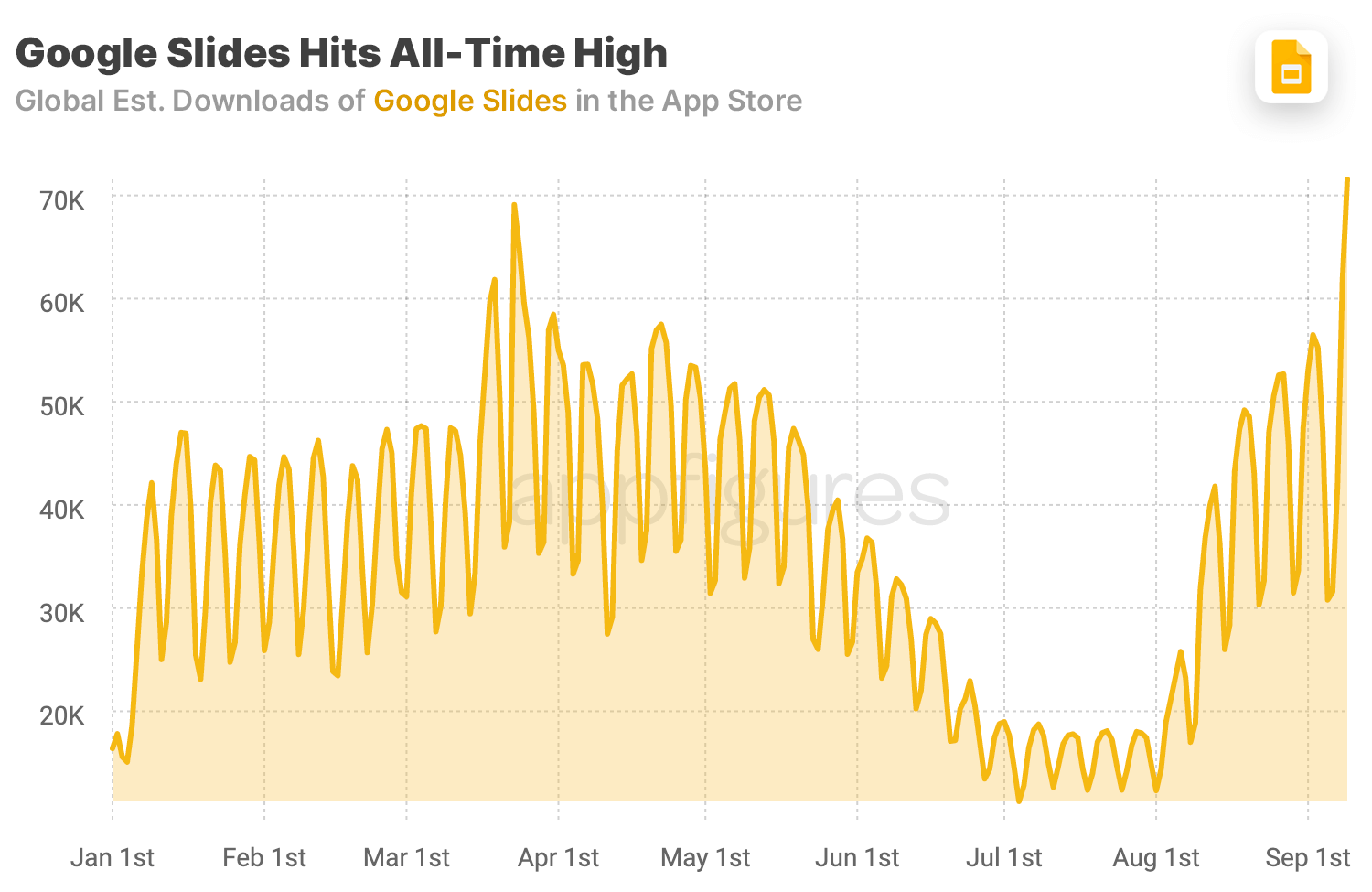 Back to School's impact on apps

Speaking of business apps, I looked at the impact of Back to School, which is now in effect across the U.S. on app downloads and revenue using the Mobile Downloads Index and the Mobile Revenue Index. Not surprisingly, both the Education and Games categories saw the most pronounced changes.

Games, which spiked during COVID lockdowns, have been on a downward trend, which hit a low of 72.83 earlier in the week.

Educational apps, which have become the go-to solution for many schools, have seen massive spikes in downloads and revenue. Downloads Index hit 361.47, its highest point this year, and Revenue Index is 232.08. Not too far from its high point of 272.72 in May. 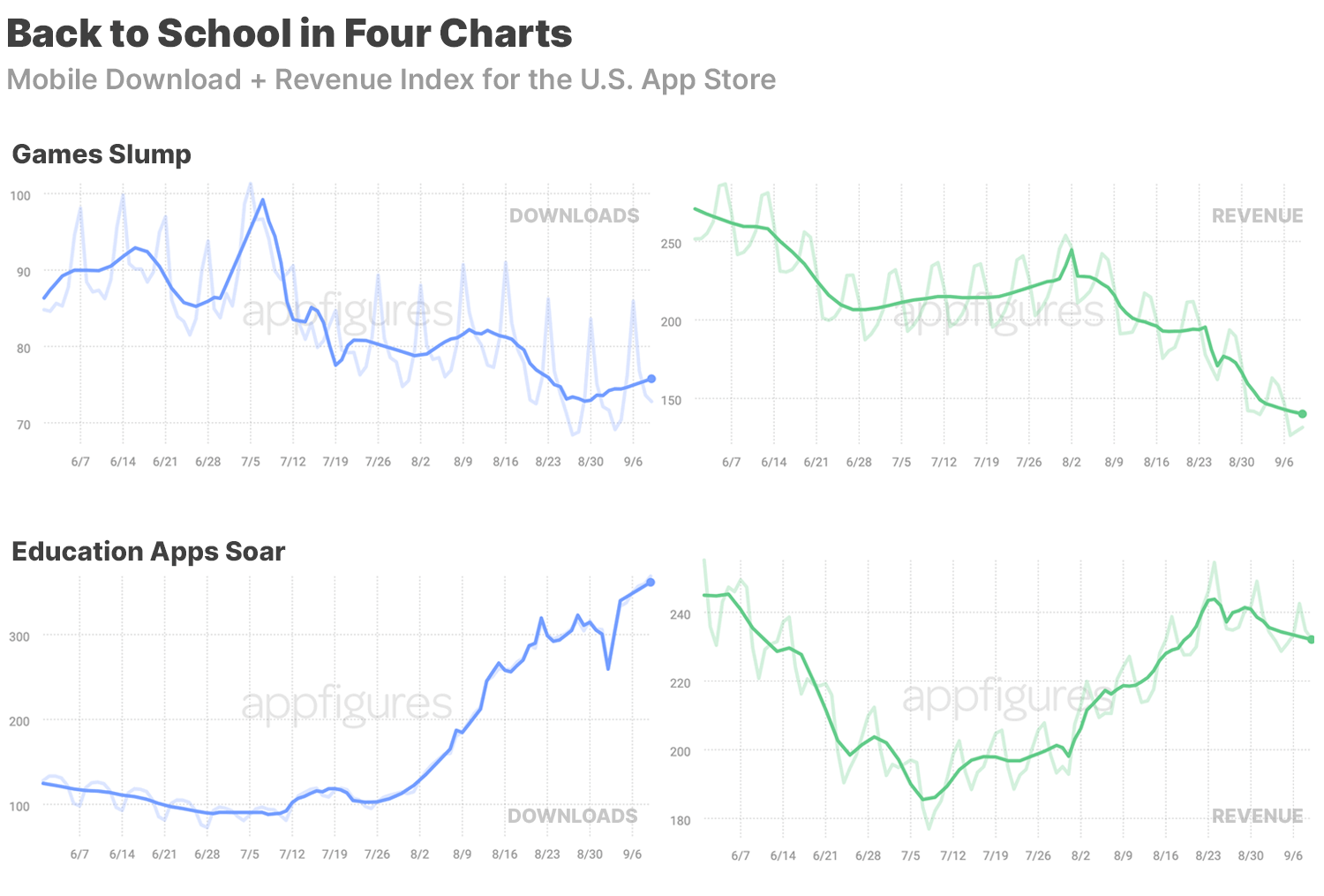