This Week in Apps #40: Games, Anime, Strava, Cyberpunk, and Periscope

📈 The Mobile Download Index is painting a very different picture for the App Store than for Google Play this week. Downloads across both stores grew this week but came from different categories. One thing's certain, fitness app are winning across all devices.

We just published the top 10 most downloaded games in 2020, and the list isn't too similar to last year. This year's indie sensation, Among Us!, made its way to almost the top, with downloads exceeding 230 million in 2020.

Candy Crush, Subway Surfers, Roblox, and others have all made their way into the top list, but it's Garena Free Fire that took the cake. 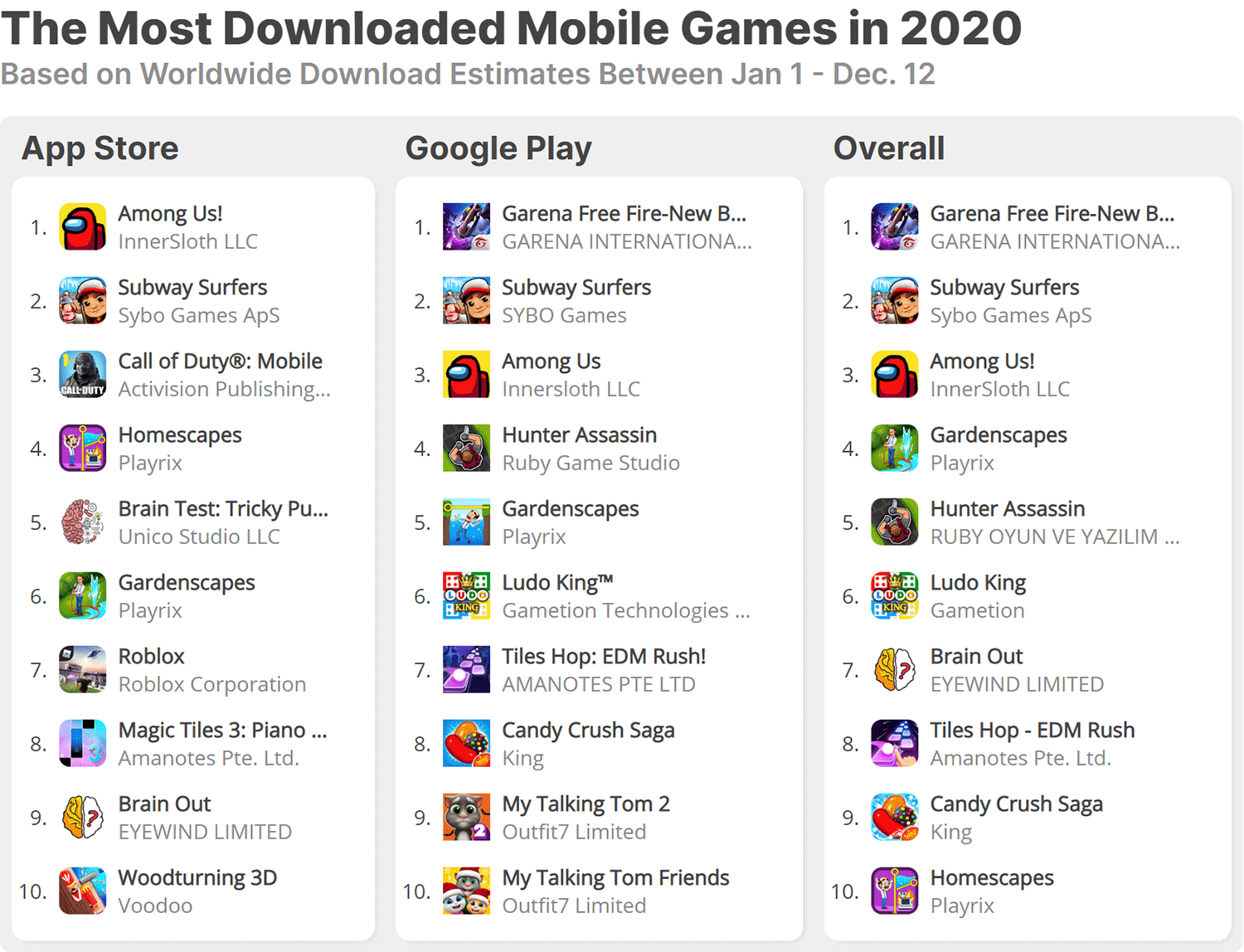 Crunchyroll, a U.S.-based streaming service for Anime shows, was sold to Funimation, another U.S.-based company that distributes anime and is owned by Sony. Funimation also dubs the shows they distribute.

How big is anime in the U.S. for consolidation to occur? Looking at Crunchyroll's downloads over the last few years we can comfortably say, very!

In 2020, Crunchyroll added more than 26 million new downloads across the App Store and Google Play. According to our estimates, the U.S. was responsible for 60% and 30% of those downloads, respectively. 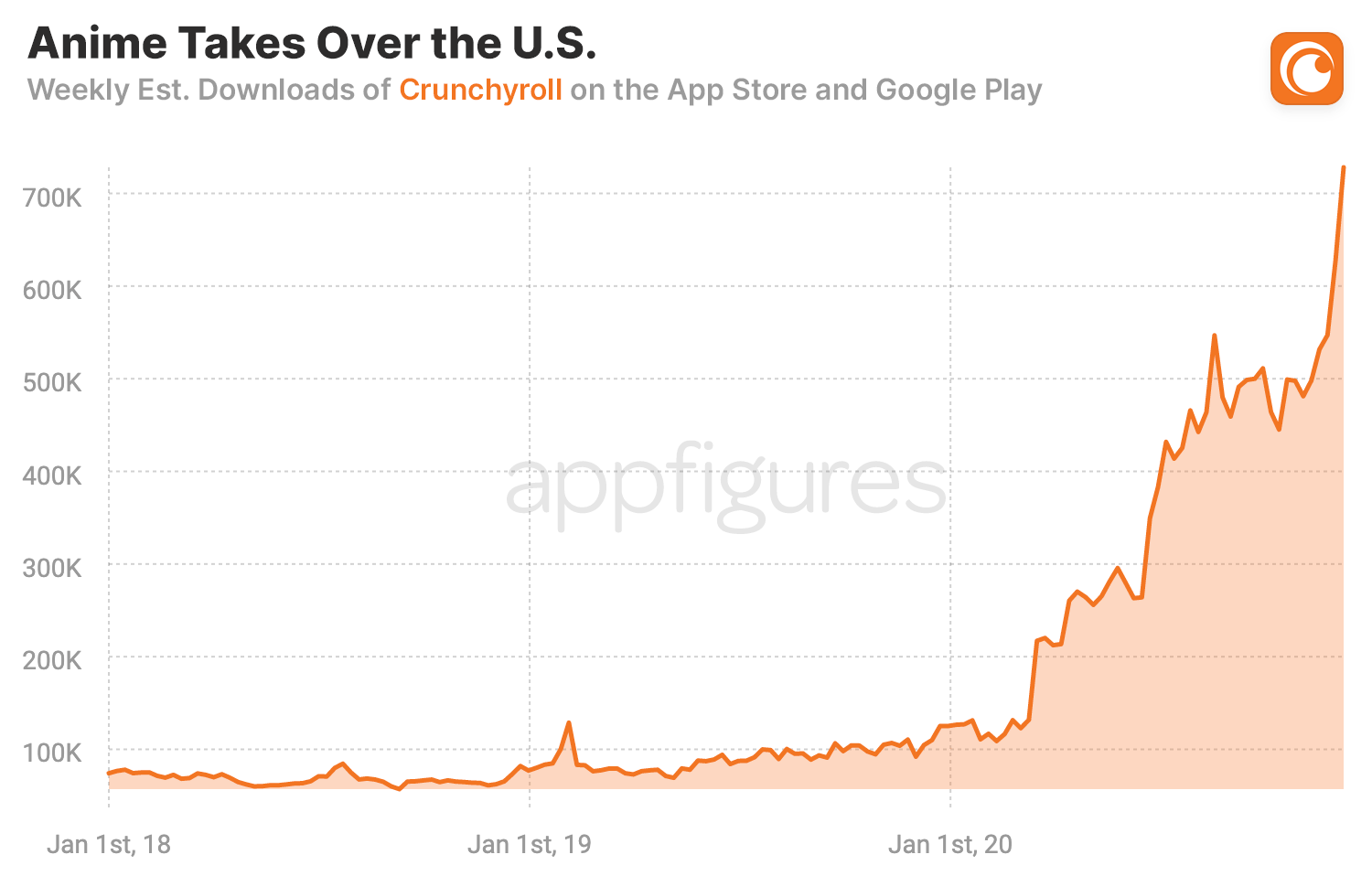 Strava, the running and cycling tracking app, released its annual Year in Sport Data Report this week. The report, which Strava claims includes data from athletes in every country on earth, shows massive growth for the platform this year.

Here are Strava's downloads in the last three years. Check out 2020.

According to our estimates, downloads grew by 170% in 2020, bringing in more than 17 million new downloads. That's the kind of serious growth the app has never seen before. 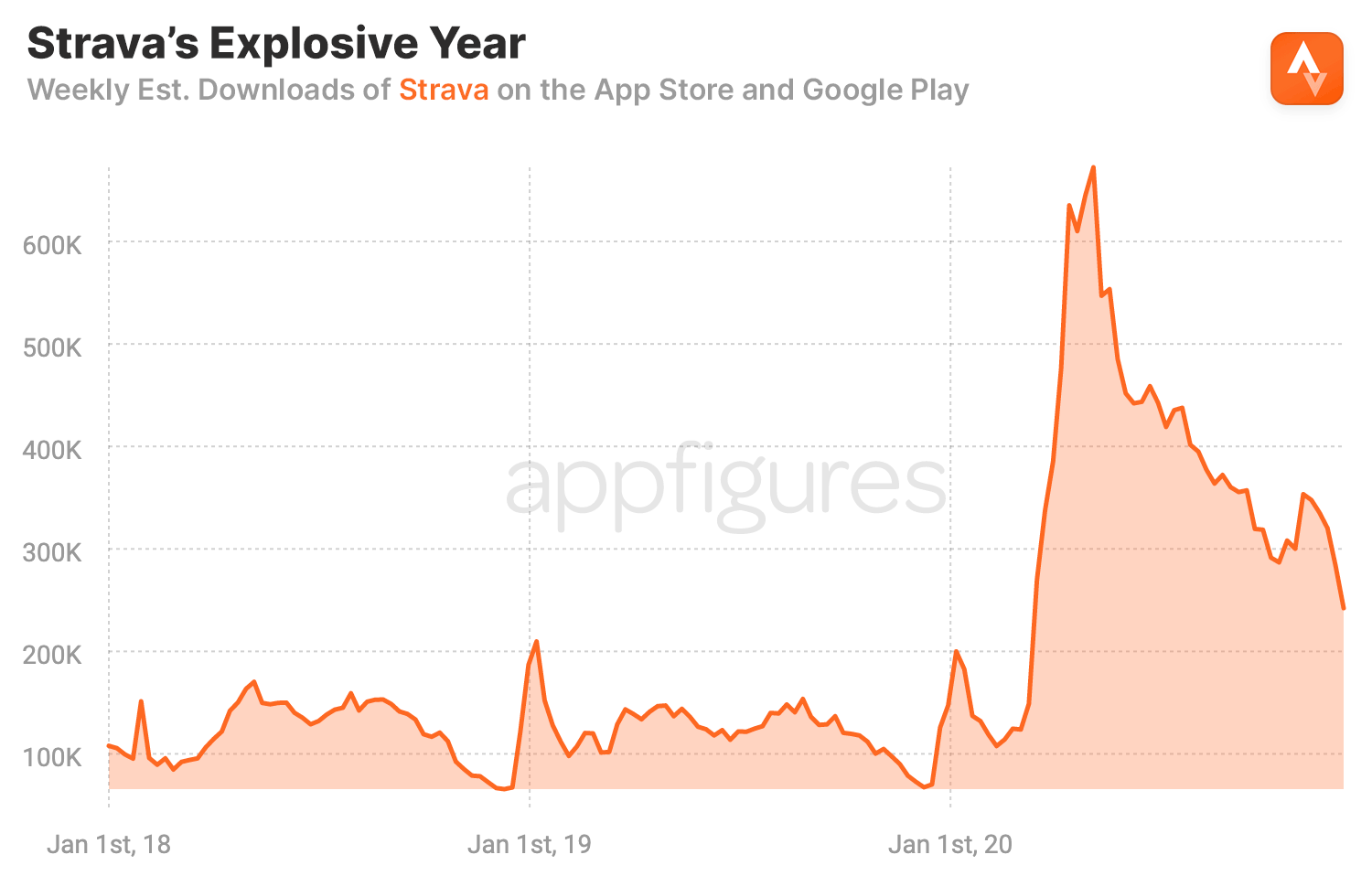 FYI - we'll take a closer look at fitness apps in our full year-end report next month.

Cyberpunk 2077, a game many have been waiting for, was released last week. If you've been following the release, you know about the many bugs, nudity glitches, and an official apology from the maker about how the game looks on consoles. It's so bad Sony had to remove it from the Playstation store.

I won't get into any of that.

Instead, I'm going to look at its performance on mobile. Although there's no mobile version, the title is available on Stadia, Google's game streaming platform. So it's technically available where Stadia is. On Android.

As expected, downloads of Stadia ballooned on release day (Saturday). The 300% spike gave Stadia an estimated total of 160,000 new downloads last week and into this one from Google Play. And while these numbers aren't very large like other apps we look at, I still see it as a win for game streaming, which will continue to rise in prominence. 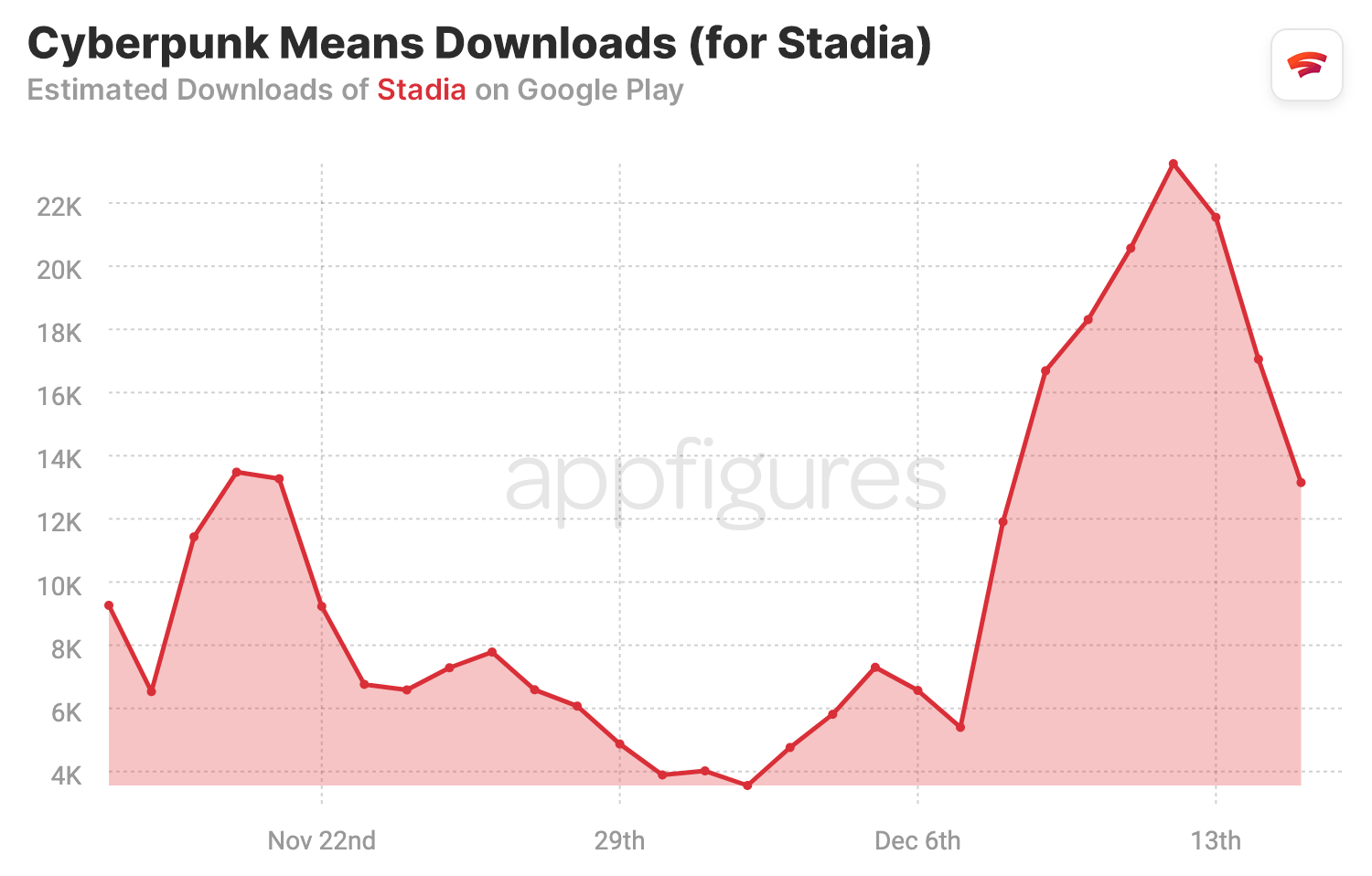 Stadia is also available for iOS, but you can't play the game through it, so it's not included in this chart.

Periscope, the platform for personal streaming owned by Twitter, announced it reached the end. The service will be shutting down next year, citing declining engagement.

I still remember my first periscope, all the way back in 2015. While Periscope was popular in some circles, it feels like it didn't quite crack the everyone popularity which it needed, so this isn't surprising.

But, what does dwindling engagement look like? Based on our estimates, that means losing more than 75% of downloads in about a year and never really recovering. 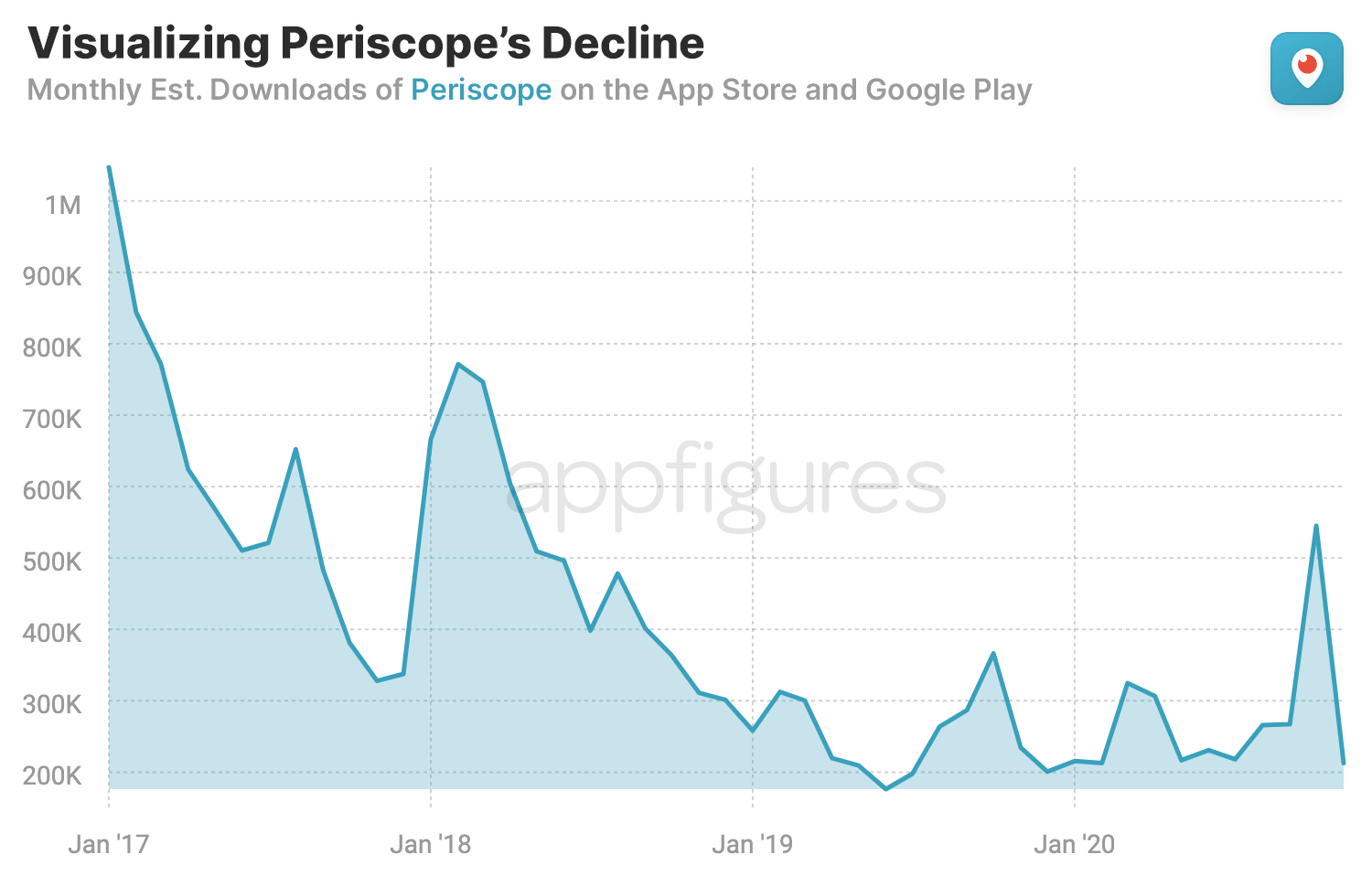 The insights in this report come directly from our app intelligence. App makers, marketers, banks, investors, and journalists all over the world rely on our intelligence every day because it's accurate and affordable. Learn more →

Note: All figures included in this report are estimated.