This Week in Apps #45 - Getting Back to Normal

📈 Going back to normal means things are slowing down, and we can see that with both indices stabilizing with a small decrease from last week. With a new administration, it's still hard to tell what's to come. I think the next few months will be interesting.

Streaming app The CW took over the #1 rank in the U.S. App Store for a short time this week, pushing downloads to an all-time high.

Back in May of last year, The CW announced it'll be delaying most new shows until 2021, which got fans down. But then 2021 came around, and they are now ready to consume all this new content on their mobile devices.

According to our estimates, downloads grew by more than 20x, from an average of 5K per day in December to 155K on Wednesday. 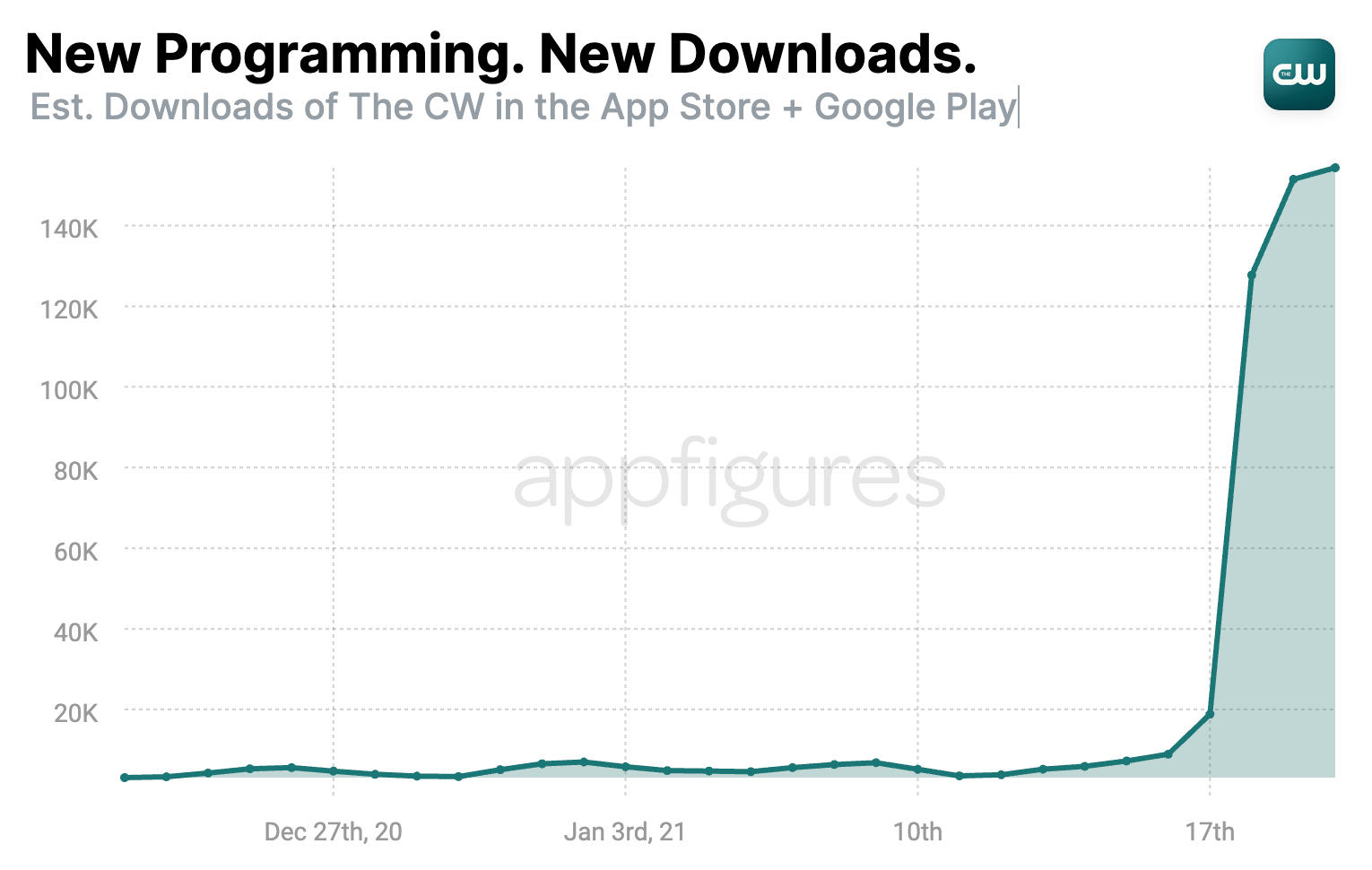 What's next: It's important to note that The CW sees a spike in downloads about once every year around October. They didn't have that spike in 2020 due to the delays but also saw the highest spike this year, so it sort of made up for it.

Our last report of the most downloaded apps in the world for December shows almost the same contenders as November, except for a tiny swap in the short-video category.

TikTok rival Likee has entered the Top 10 in December with more than 22M estimated downloads in December. However, TikTok is still the king. Based on our app intelligence, in December, TikTok added more than 60M new downloads across platforms and local variants worldwide. 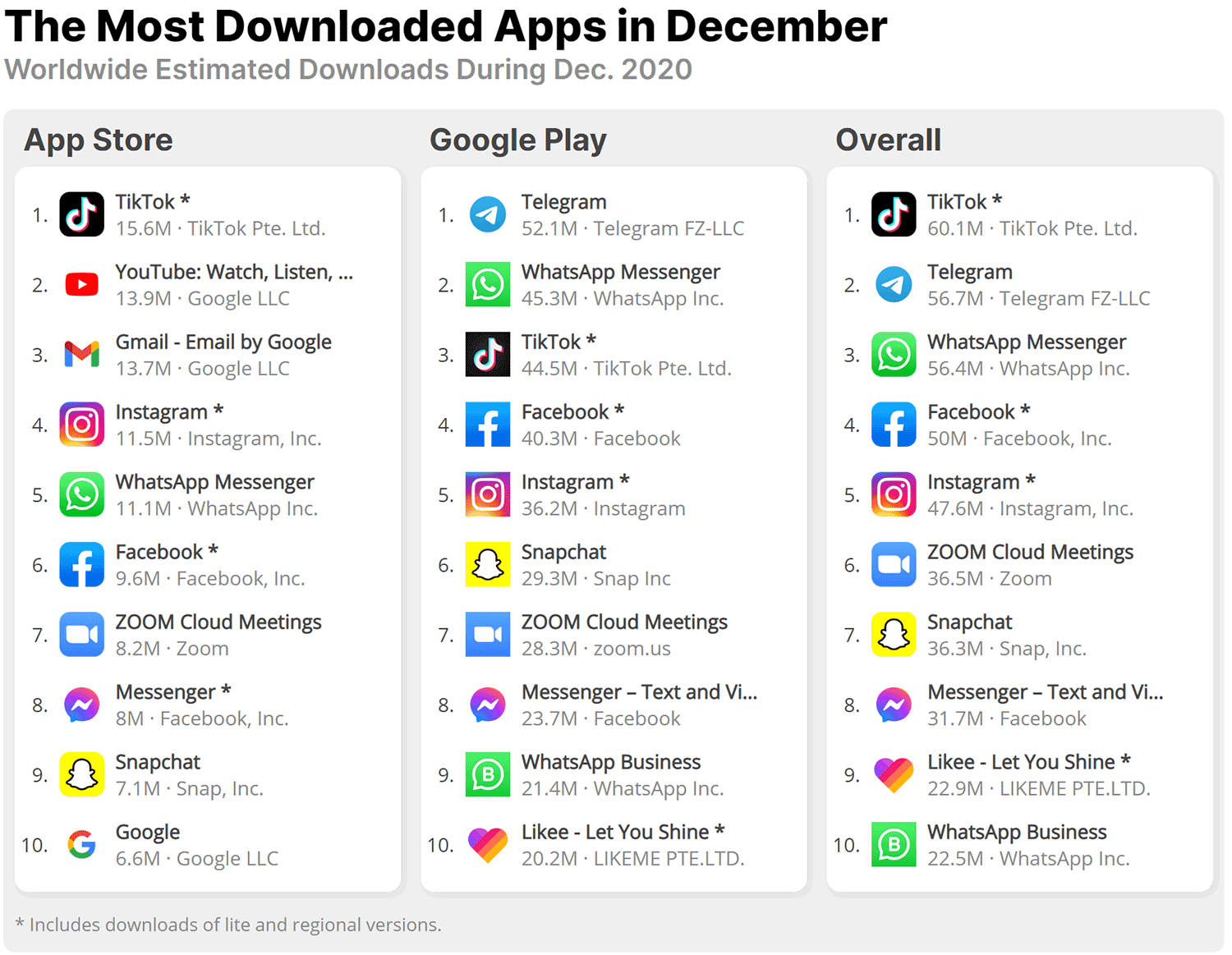 Signal, the messaging app recommended by Elon Musk a couple of weeks ago, has become much more of a household name this week. It also suffered a major outage.

But where are they all coming from? Short answer: India and Indonesia.

Looking at downloads by country, it's immediately obvious that Signal's amazing growth is in countries where it didn't see too many downloads before.

Indonesia, India, and South Africa, which accounted for 40% with more than 10M estimated downloads so far in January, barely got close to the top 10 in November. 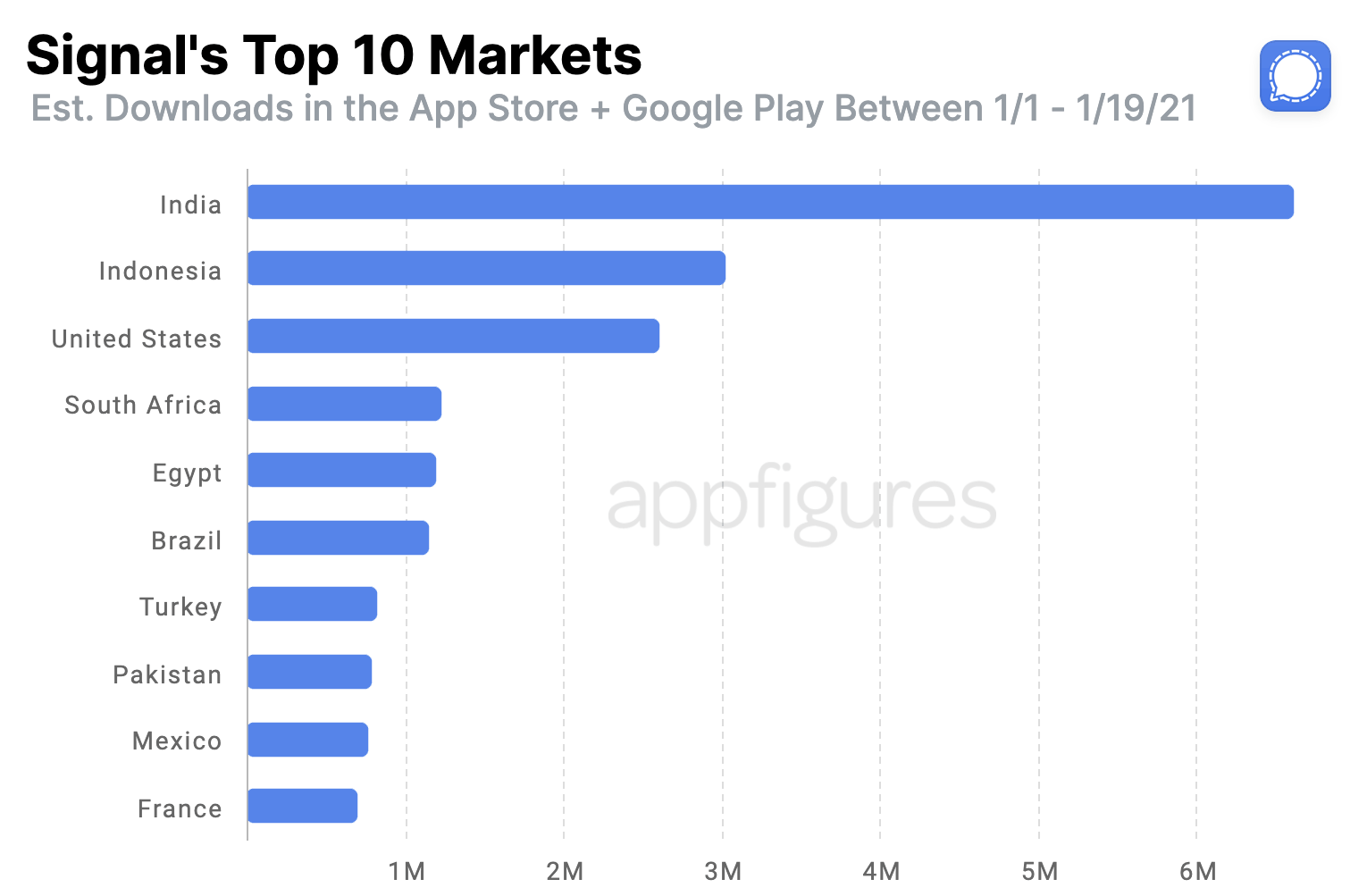 That whole shift to Signal was a result of WhatsApp updating its terms and being a bit too cocky about it (in my opinion). The terms, which were misunderstood by users to mean Facebook will have access to all of their private information, resulted in a hit for WhatsApp's downloads.

Daily downloads, which grew in November to more than 2.2M according to our estimates, were down to just 1.2M last Saturday, which is the best day of the week for WhatsApp historically.

A million downloads is not small number, but when it's a half of what you're used to, it just has to hurt.

What's next: Lots of countries rely on WhatsApp for social interaction, so it's unlikely that it'll be dying any time soon. But unless it can recover its momentum, Facebook is in for a very competitive year. 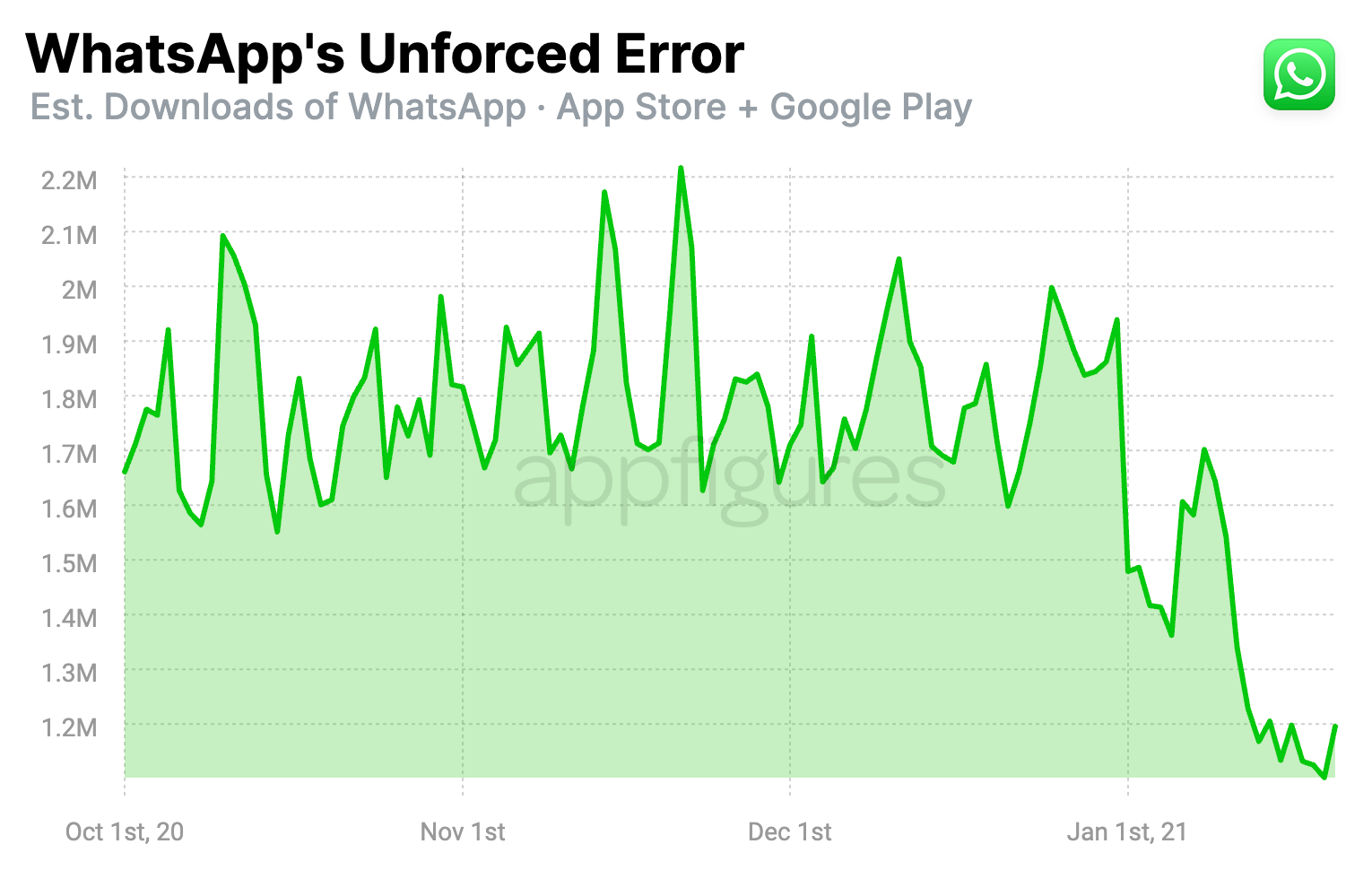 Summer sensation Among Us!, which commanded the #1 rank for several months, has been slowly dropping off into oblivion. Downloads are on their way down too.

Weekly downloads, which reached 18M in mid-September according to our estimates, have dropped to 4.8M last week. That's a drop of 73%.

Some are attributing this decline to InnerSloth's lack of updates. While I love seeing indie studios succeed, maintaining momentum at such a scale is no easy feat, especially not for a team that isn't used to it.

Do you think Among Us! can regain its momentum? 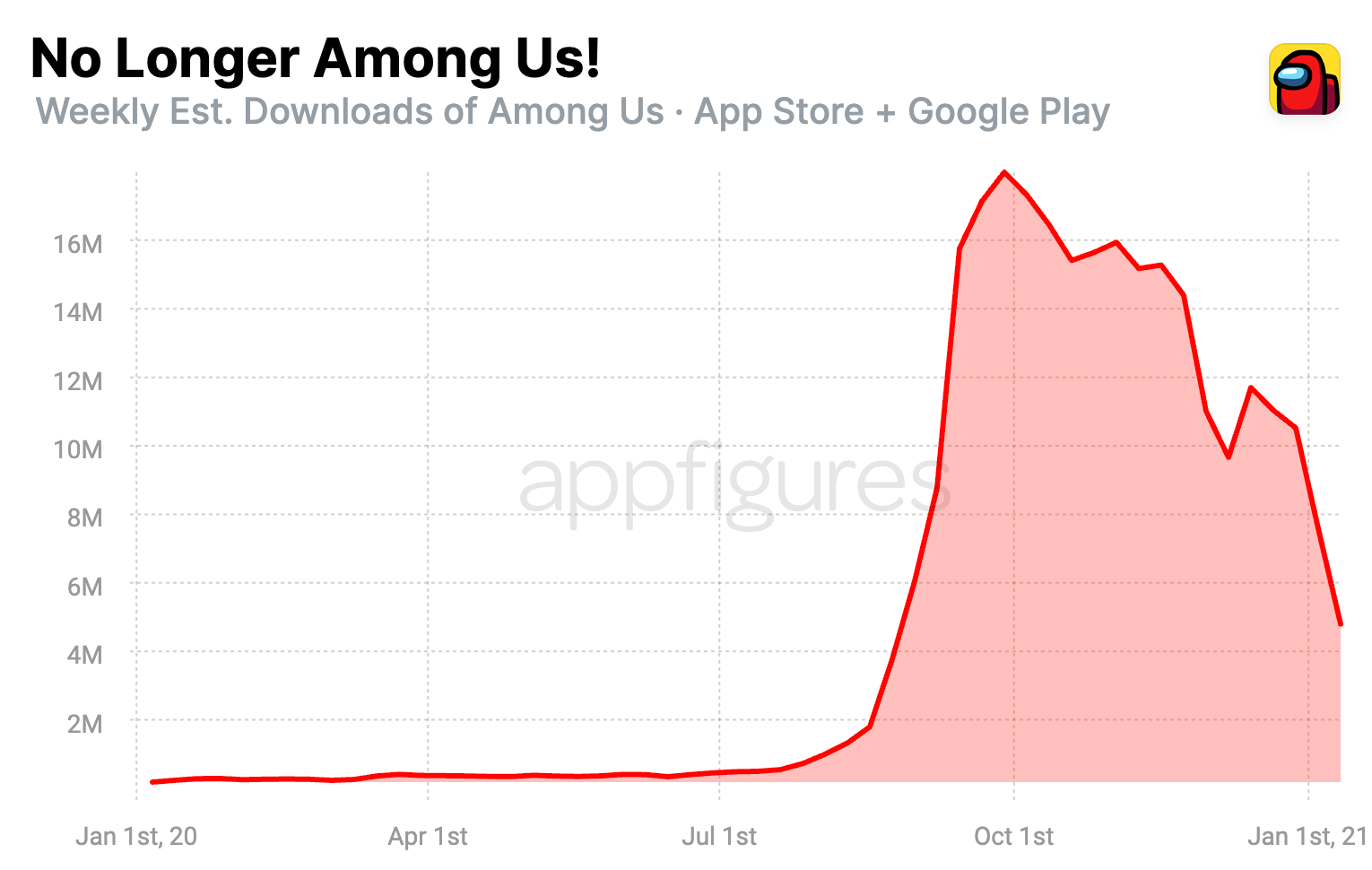