This Week in Apps #49 - Dating from Home

This Week in Apps is a short, data-first, no-fluff, round-up of interesting things that happened in the mobile industry. Here are our top highlights.

📈 Apple's slightly up and Google Play is down but only by a smidge as we start to exit the "February dip." We expect the upward trend to continue as we end February and head into March.

Stuck at home with limited restaurants opened, couples who wanted to celebrate Valentine's Day with a special meal were forced to order it to-go on their phones. 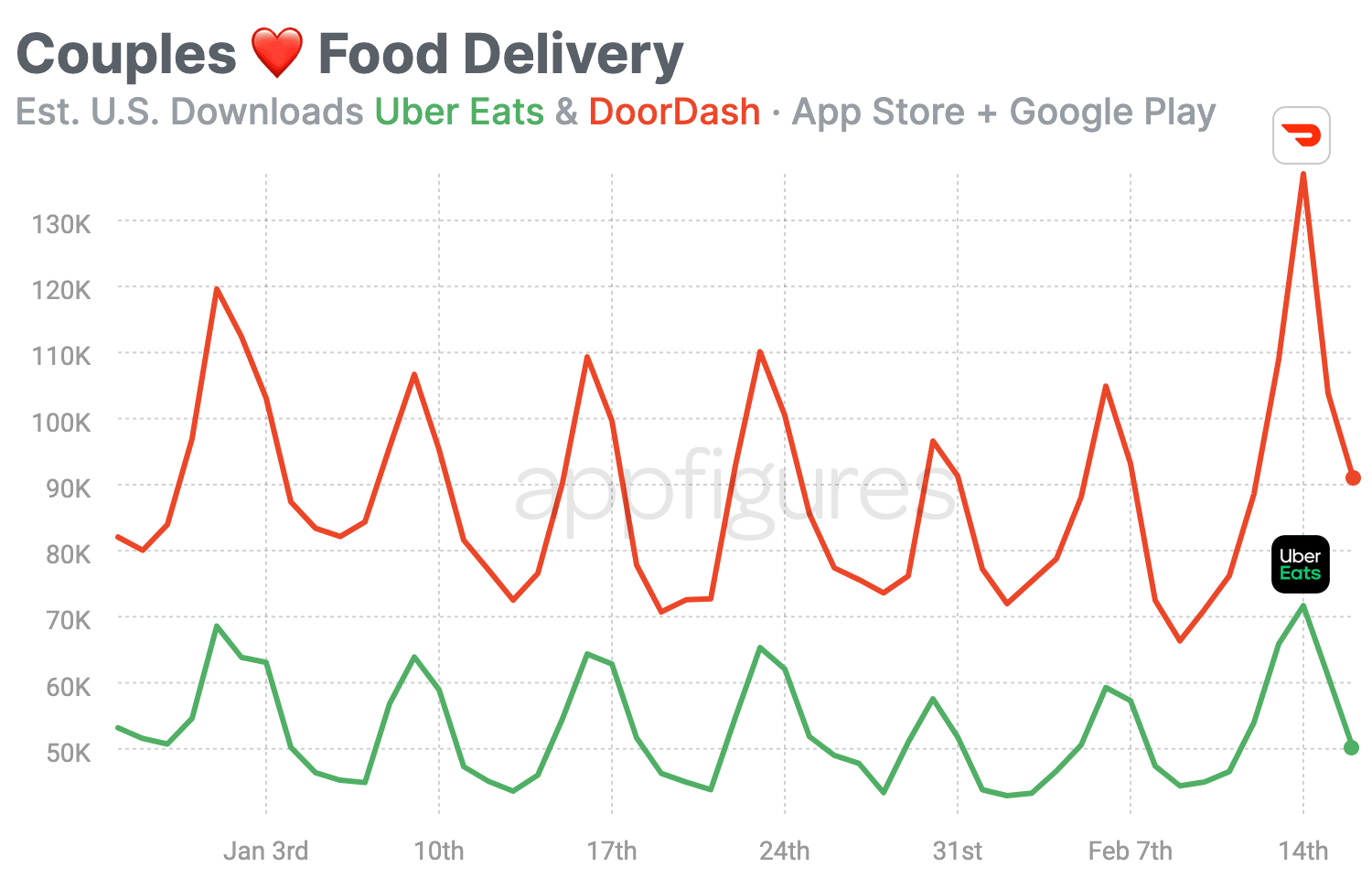 Valentine's Day demand put a positive dent into the downloads of Uber Eats and DoorDash, giving both a significant increase last Sunday.

In the U.S., DoorDash added 137K new users on Sunday. Uber Eats added 70K new users, based on our estimates.

Speaking of couples, this January saw the most consumer spending on dating apps, both by absolute numbers as well as year over year growth. 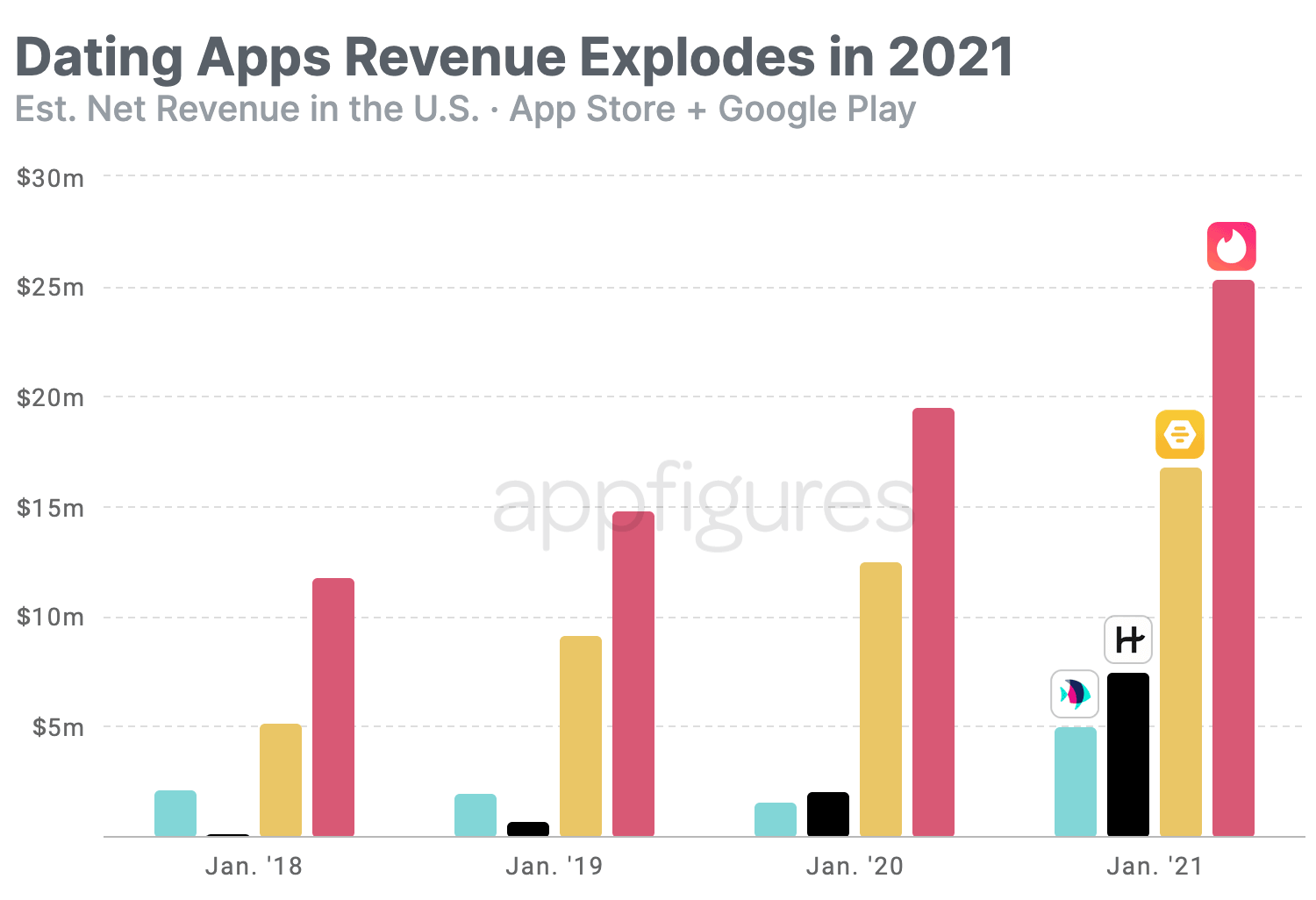 Dating from home, which most young singles are forced to these days, is really taking off and could become the way couples meet in a few years. Is "to tinder" someone a verb already? If not, it will be soon.

I've been hearing quite a bit of chatter about Dispo, a "disposable" camera app, this week, so I wanted to see what all the buzz is about.

The app, which launched a private beta last week, gives you all the benefits of a real-world disposable camera, which translates to taking a picture and waiting until the next morning to see it. That's right. I said waiting. 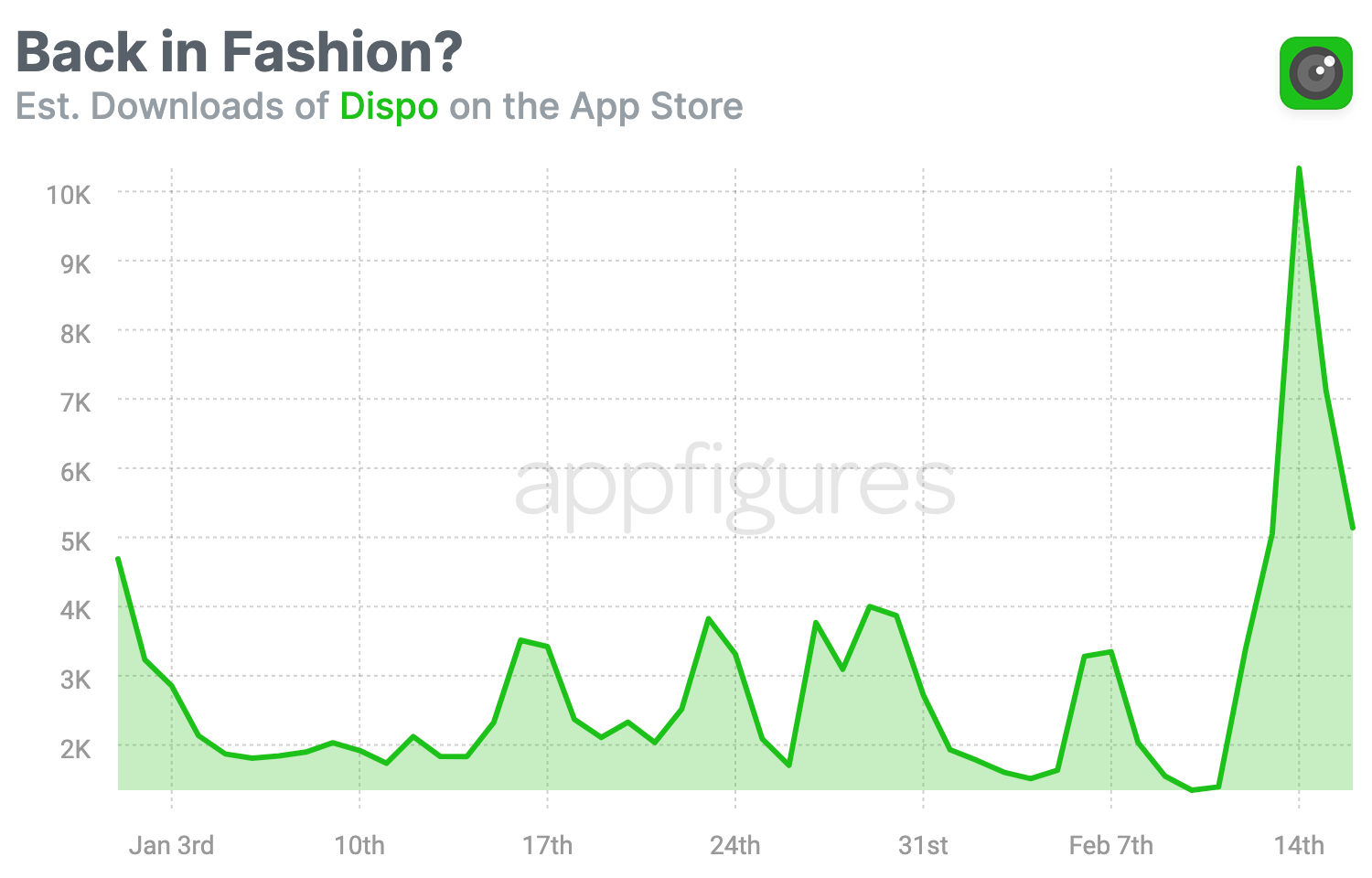 Downloads jumped with the release of the invite-only beta to 10K this weekend, roughly 4x the daily average for the last month based on our estimates.

Dispo was founded by a YouTube star and backed by Reddit's founder Alexis Ohanian and other celebs, including Sofia Vergara and The Chainsmokers. Dispo has raised $4M for this adventure which may seem like another Clubhouse but could very easily end up a Quibi.

This reminds me of Hipstemaic, which was the belle of the ball before Instagram showed up. I remember what having to wait for film to get developed feels like, so I don't particularly want to wait for my pictures in the digital age, but I'm going to wait and see how this one pans out.

Last week I looked at the most downloaded apps in the last month, and this week I'm looking at games. I really wanted Among Us! to take the #1 place again, as it has in the last few months, but as I suspected, it didn't. 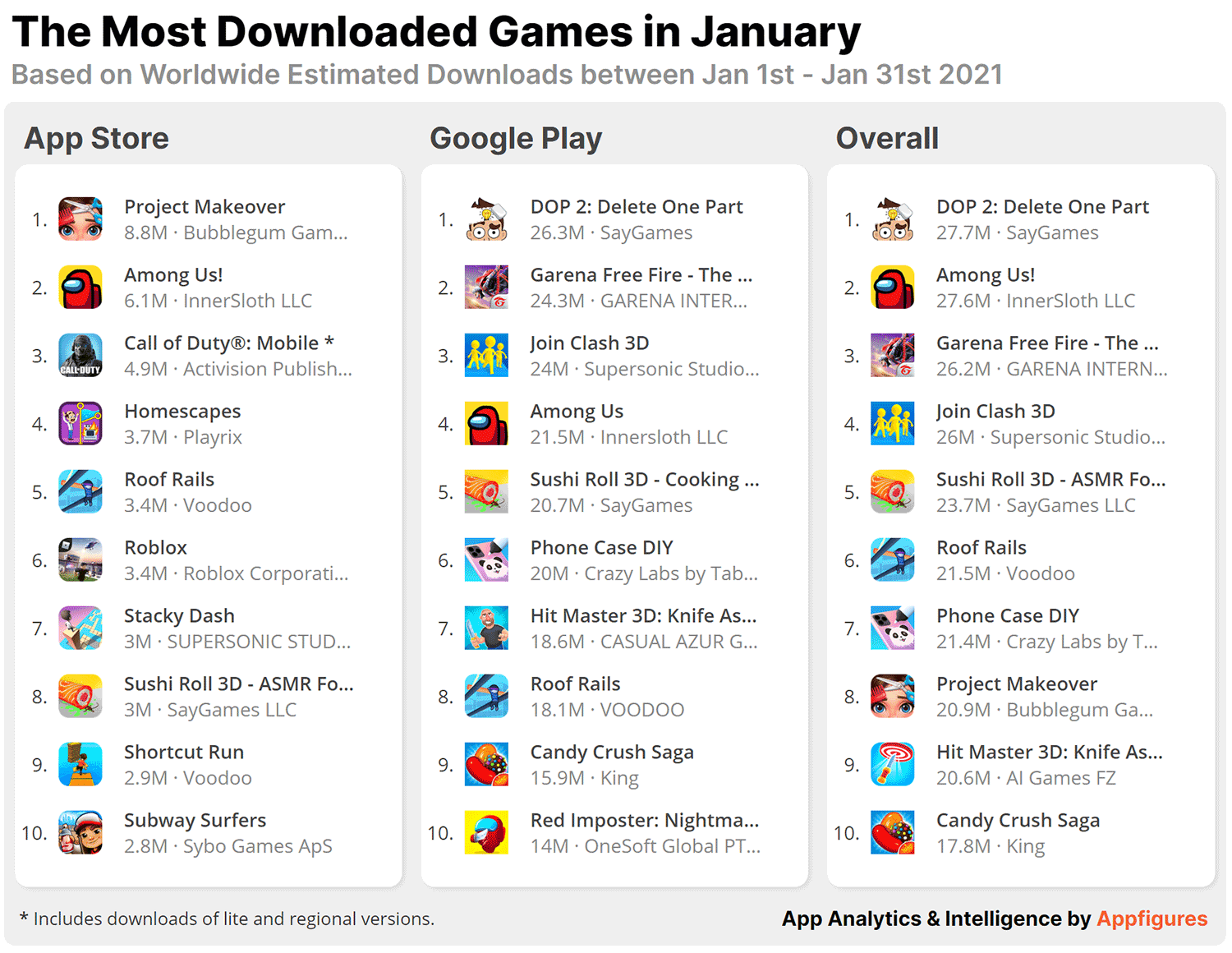 January's winners are both, wait for it, hyper-casual titles. Happy 2021!

Project Makeover, which we looked at a few weeks ago, and DOP 2: Delete One Part were the most downloaded apps on the App Store and Google Play, respectively. DOP 2 managed to snag the most downloaded game overall from Among Us! by less than a million downloads, based on our App Intelligence.

In total, the top 10 games overall earned 233M downloads in January, according to our estimates.

Genshin Impact has been growing steadily since being released in September of last year. Last week, the Chinese title hit a new all-time high for daily revenue, earning an estimated $946K after Apple's and Google's cut, in the U.S., in a single day (Feb. 4th). 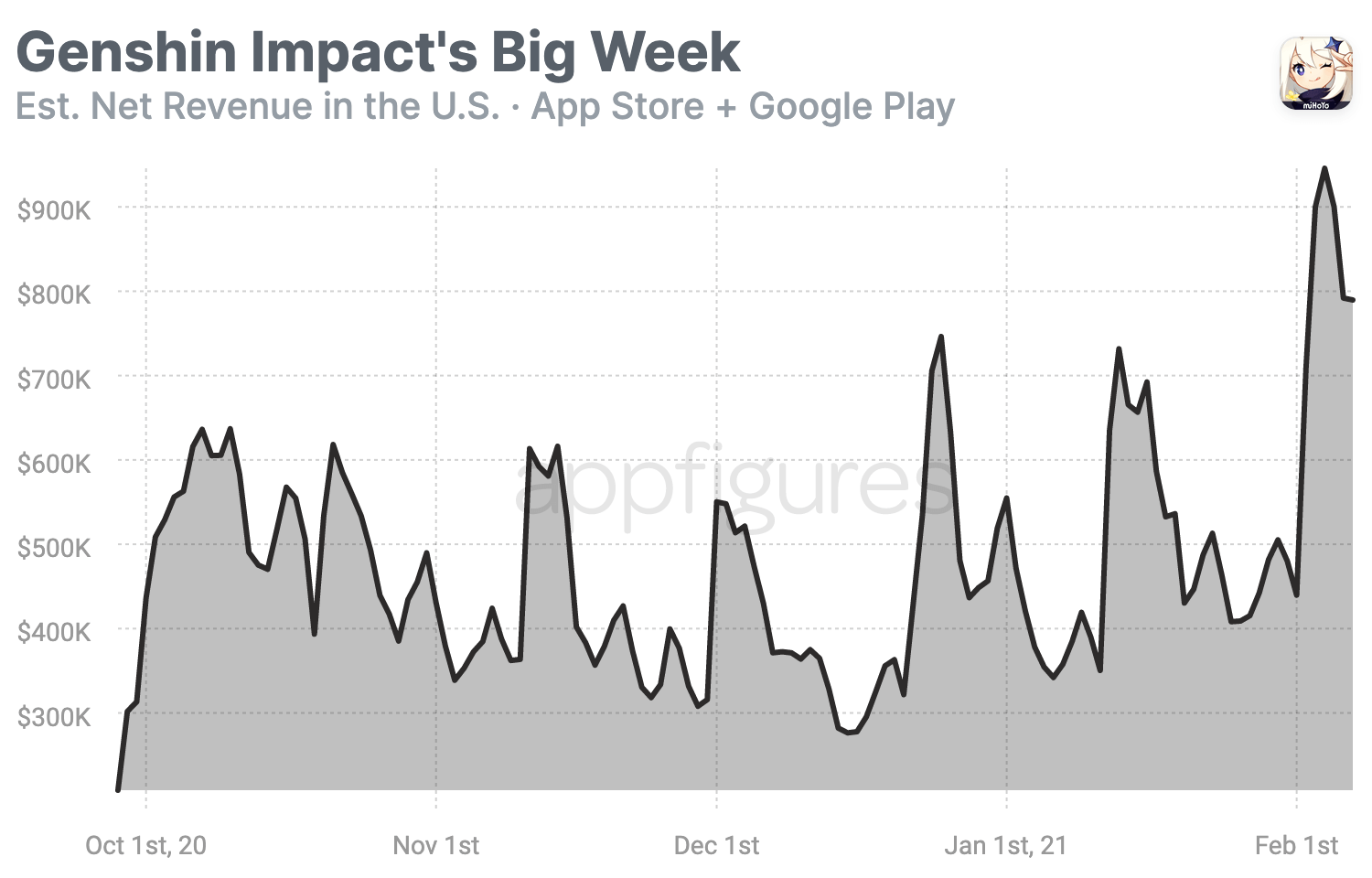 The game's previous all-time high, in the U.S., was on Christmas day and brought in $746K of net revenue. This new high is an increase of 27%, which is impressive for such a short period of time.

miHoYo has a great track record, so this isn't a surprise, but it's interesting to see how quickly the title, which isn't as mainstream as some other hyper-casuals I mentioned before, is catching on.