This week Roblox IPOd, and investors showed how much they love the platform even if they don't totally get it. What they do get is revenue, and Roblox has a lot of that. 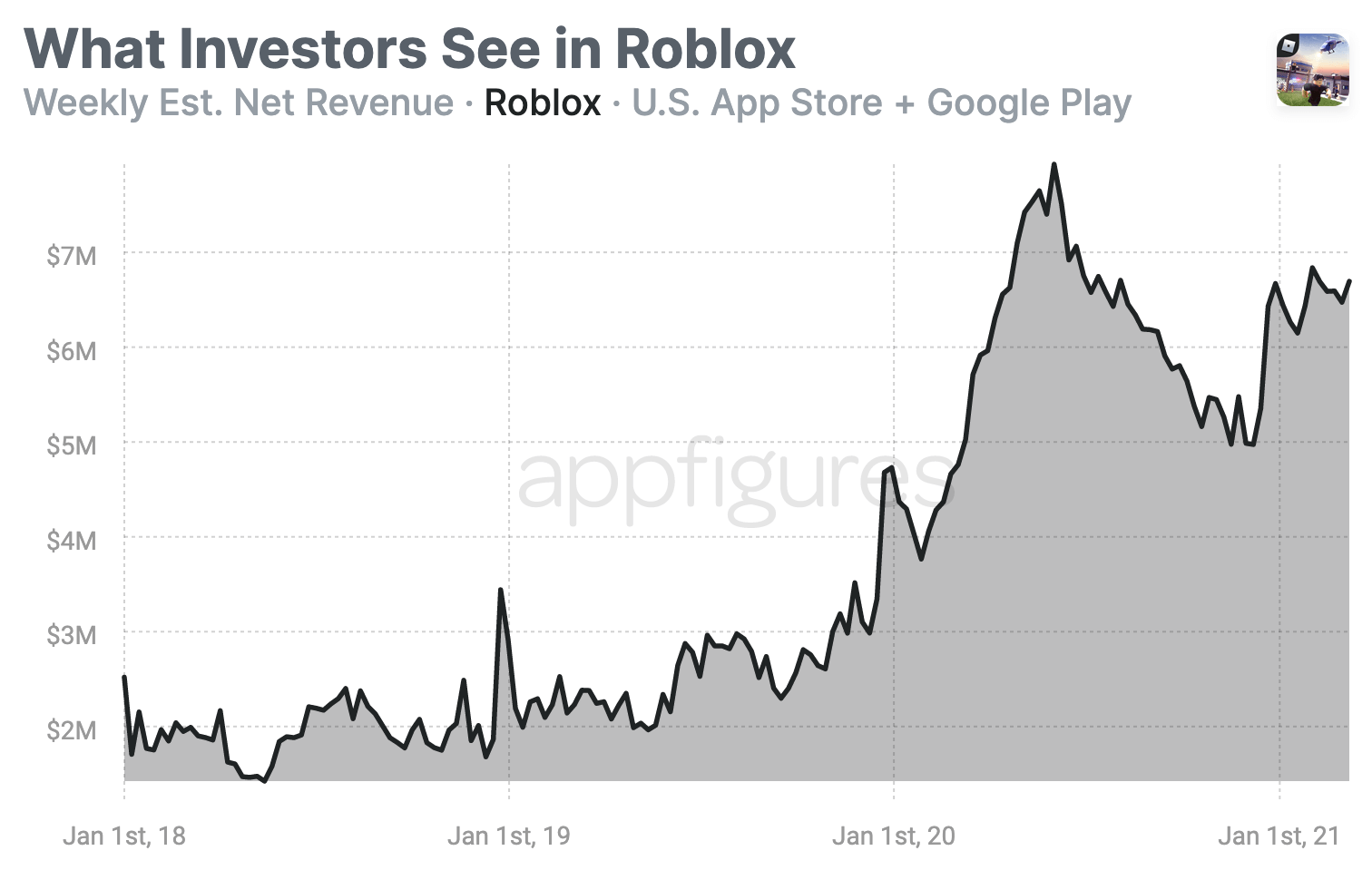 What investors are really seeing here is almost 3x revenue growth, and that's in the U.S. alone. It'll be harder to match this growth in 2021, but with $68M already earned in 2021, based on our estimates, I fully expect Roblox to get close.

What's the point? A slew of mobile-first companies went public in 2020 and those were mostly successful, priming investors to open their wallets and invest, which in turn will incentivize more companies to focus on growing revenue so they can go public.

App Intelligence you can rely on to grow you business.

Another company that's grown revenue a lot in 2020 is Twitch. It closed 2020 with huge year-over-year growth, and that doesn't seem to be stopping as we get close to the end of Q1. 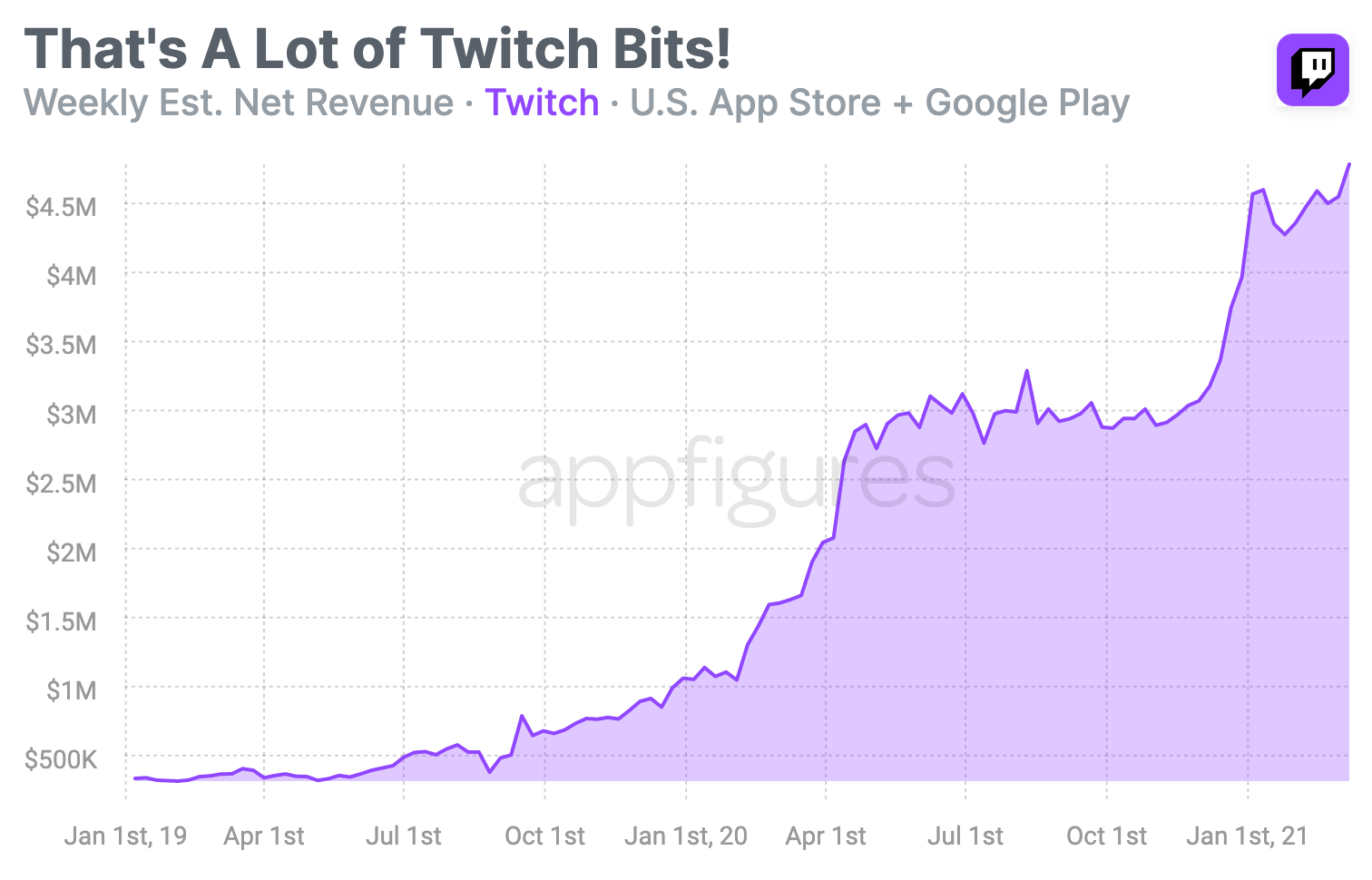 The bottom line: At this rate, 2021 will be a record year for the streaming service that's gaining traction beyond games. We estimate revenue will triple in 2021, and given last year's revenue, that's a lot of Twitch Bits. Even if growth stops for some reason, we still expect revenue to double this year. Win-win.

It's time for college basketball, which, of course, means downloads.

This week CBS Sports, not to be confused with its new sibling, Paramount+, saw its downloads climb. ESPN Tournament Challenge followed and eventually leaped it because you can't really follow without good brackets. 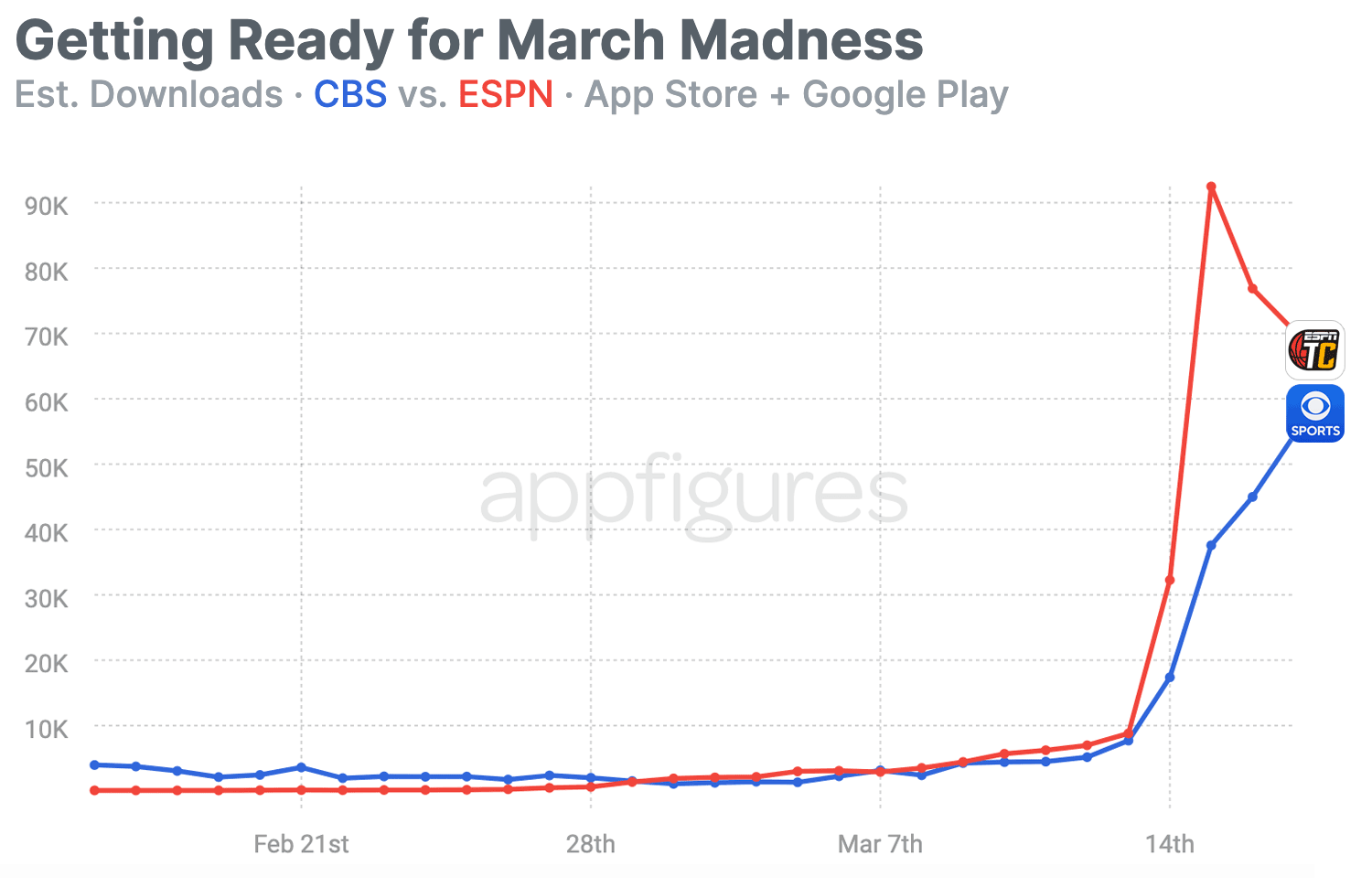 Based on our estimates, downloads of CBS Sports have climbed over the last week from just under 2K/day on average to a peak of more than 54K on Wednesday.

ESPN Tournament Challenge, which keeps track of your brackets, grew even more. Downloads ballooned from just around 100/day on average to a peak of 92K on Monday and have stayed over 70K/day since according to our estimates.

FYI - The official NCAA app also cracked the top lists but is far behind both of these. There's some room to grow there.

If you've used TikTok before, you probably noticed how much editing many of the successful videos seem to be doing. Some even attribute TikTok's traction to that. But, TikTok doesn't have serious editing tools built-in, so how do those happen? 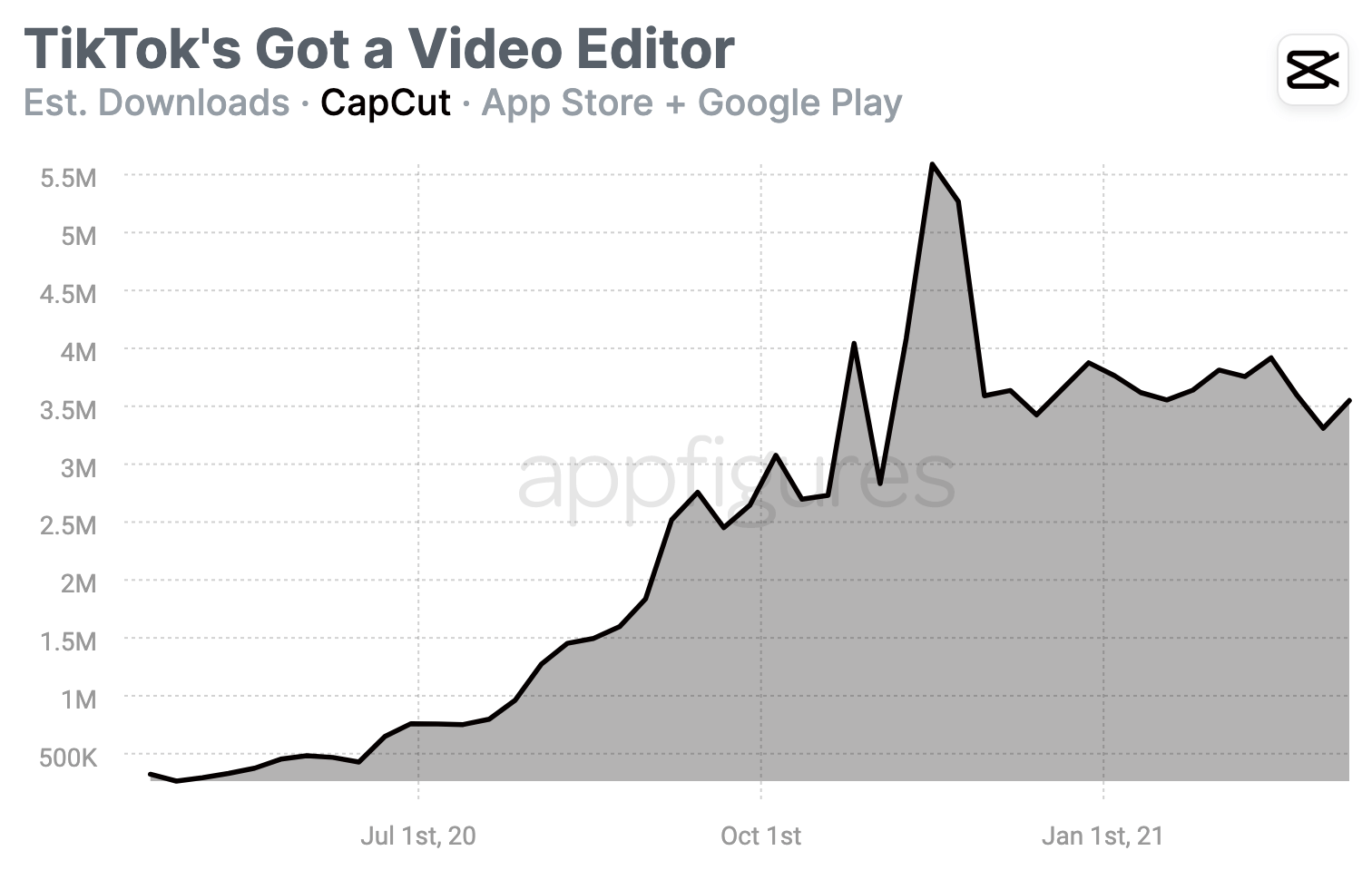 CapCut is a free video editing app from TikTok parent ByteDance that gives creators tools to edit their videos with all the effects and filters you can think of.

The app, which was released last April, has already managed to rake more than 107M downloads across the App Store and Google Play, according to our estimates.

Bottom line: Creators need tools to create, and when it comes to social media, those tools have to be easy. The market for simple video editors is already pretty competitive, but TikTok's entrance with a completely free app is sure to shake things up.

Deepfakes are slowly making it into the mainstream, which is both disturbing and hilarious at the same time.

A few weeks ago it was MyHeritage. This week it's Wombo. 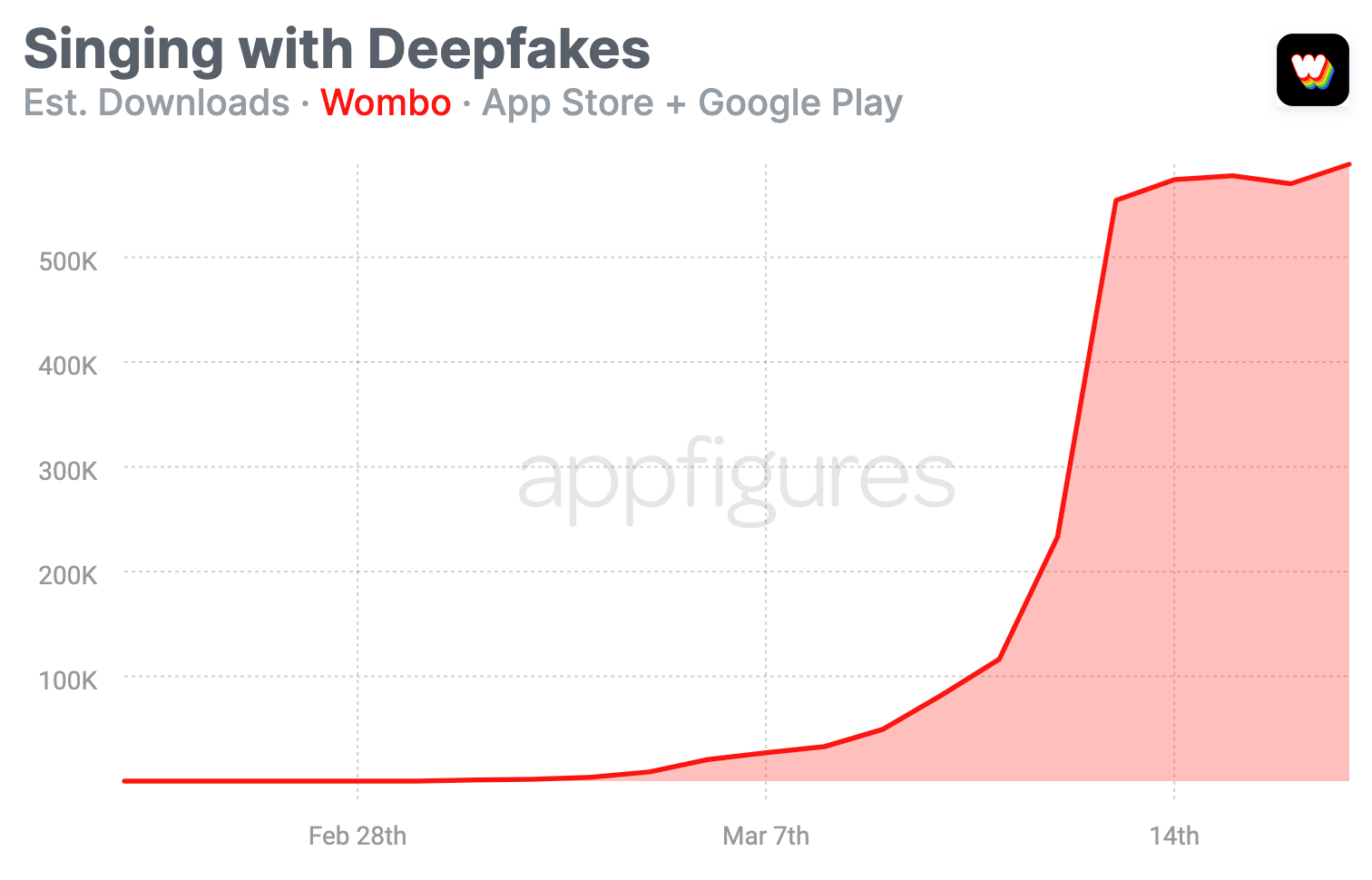 Wombo is not even a month old, and this week has seen downloads exceed 500,000 downloads a day, every day of the week, according to our estimates. In total, Wombo was downloaded by nearly 3.5M people around the world.

The selling point of this free app is that it takes your picture and lip-syncs it to music available in the app.

I tried Wombo and wasn't a big fan. While its onboarding is super smooth, if you select a free song the app takes forever to render it, and if you select a paid song, which isn't marked all that clearly, you're blasted with a paywall that sells you on... faster renders.

My deepfake didn't look as good as Elon's, which they have on their homepage.

What's next? Deepfakes are still in their hilarious phase, but with time I fully expect to see simple apps that'll offer much more serious use-cases. The tech behind it is really fascinating, but the potential for chaos for our society could be high. I don't usually think of tech in this way, but for some reason, I can totally see these funny apps going rogue.

This Week in Apps #55 - Monsters, Podcasts, and More

A year into the pandemic we can see its impact on everything, from business communication to entertainment and sports.