This Week in Apps #67 - The Green Giant, Prime Day, Banking, and Sports

1. Spotify (Tries To) Paint it Green

The success of Clubhouse, the audio-only social network that got popular earlier in the year, hasn't gone unnoticed.

Last week Spotify released an app that's pretty much a direct clone of Clubhouse but has a green theme. It's aptly called Greenroom (which I accidentally called greenhouse on Twitter...)

Clone or not, I expected a big name like Spotify to draw a lot of attention to anything new it releases.

Let's see how the release went for the green giant:

The Android version of Greenroom is still in private beta on Google Play, so we don't have estimates on it, but we'll share those once it launches officially.

Do you think Spotify chose to launch iOS officially first because that's how Clubhouse did it, or because of more legitimate reasons?

I find this launch interesting not only because I've been following Clubhouse for the last few months, but also because I expected that competing with it won't be too hard. It looks like it might be, and for the obvious reason — everyone's already on Clubhouse.

Twitter's lackluster launch of Spaces was pretty much the same, so it's not just Spotify.

That's the first-mover advantage that Clubhouse has and that its investors were hoping for.

I don't know where Clubhouse is heading, but if you ask me, making money for itself and for its creators is the name of the game, especially if we look at Twitch and TikTok.

Travel is continuing to pick up steam and return to pre-pandemic trends. This week, flight and hotel booking app Hopper hit the most downloads in a single day this year and the #2 place in its category below Uber.

Downloads, which have been growing steadily for the last few months, hit 49K last Tuesday, beating its last high of 48K in April.

Pre-pandemic, Hopper's best day of downloads, in April of 2019, added 66K new users to the platform after a long climb. The good news is that the growth trend over the last few months looks almost identical to the trend that led to the peak in 2019, which to me signals the ad budgets are back and that demand is growing at near-normal rates now.

This is good news for the entire industry, from airlines to hotels, restaurants, and everyone else that's involved in the out-of-home experience.

The trend has to grow and fast because that's how it was pre-pandemic, and even though many of us are now more comfortable with doing more things remotely, it's unlikely that remote will replace IRL any time soon.

3. Are You Watching Soccer Right Now?

EURO 2020 (which is playing in 2021) kicked off last week, and if you've been reading for a while, you know that apps for sports are in high demand these days.

Just how much demand, you ask? Let's check our App Intelligence for EURO 2020: 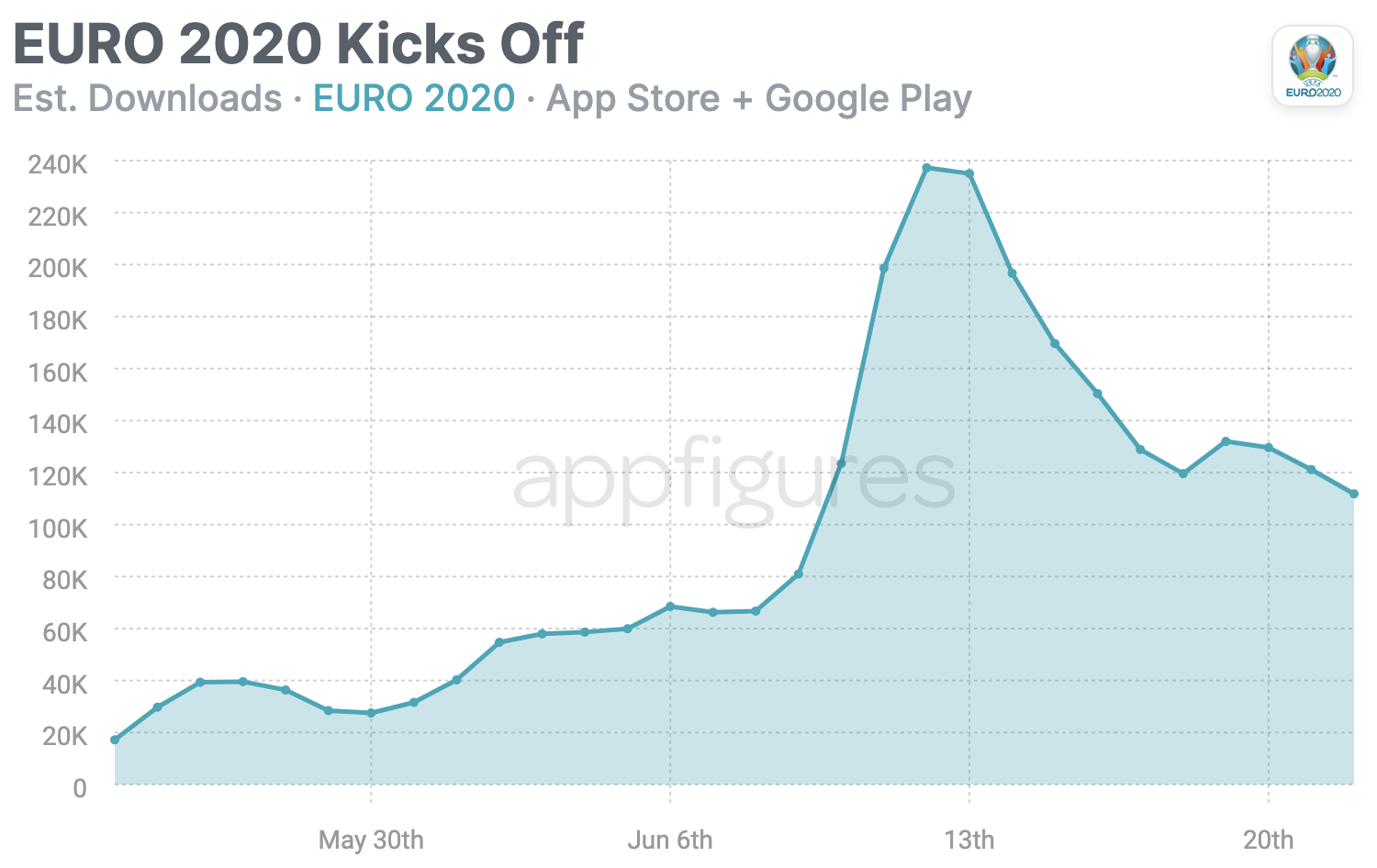 Demand for the app started in late May as fans were getting ready for the first game, which played on the 11th of June. On game day, downloads reached 200K globally, according to our estimates.

That was a Friday. The weekend continued to deliver for UEFA, the organizer of the games, with 237K and 235K downloads on Saturday and Sunday.

Our estimates show that since the beginning of May, new downloads have totaled 2.9M. About 58% of those came in through Google Play and the rest through the App Store globally.

If you weren't sure before, this should make it very clear, sports fans have gone digital.

Did you buy anything on sale this Prime Day?

Amazon's annual Prime Day took place earlier in the week and looking at downloads, we can tell Amazon's certainly still got it. 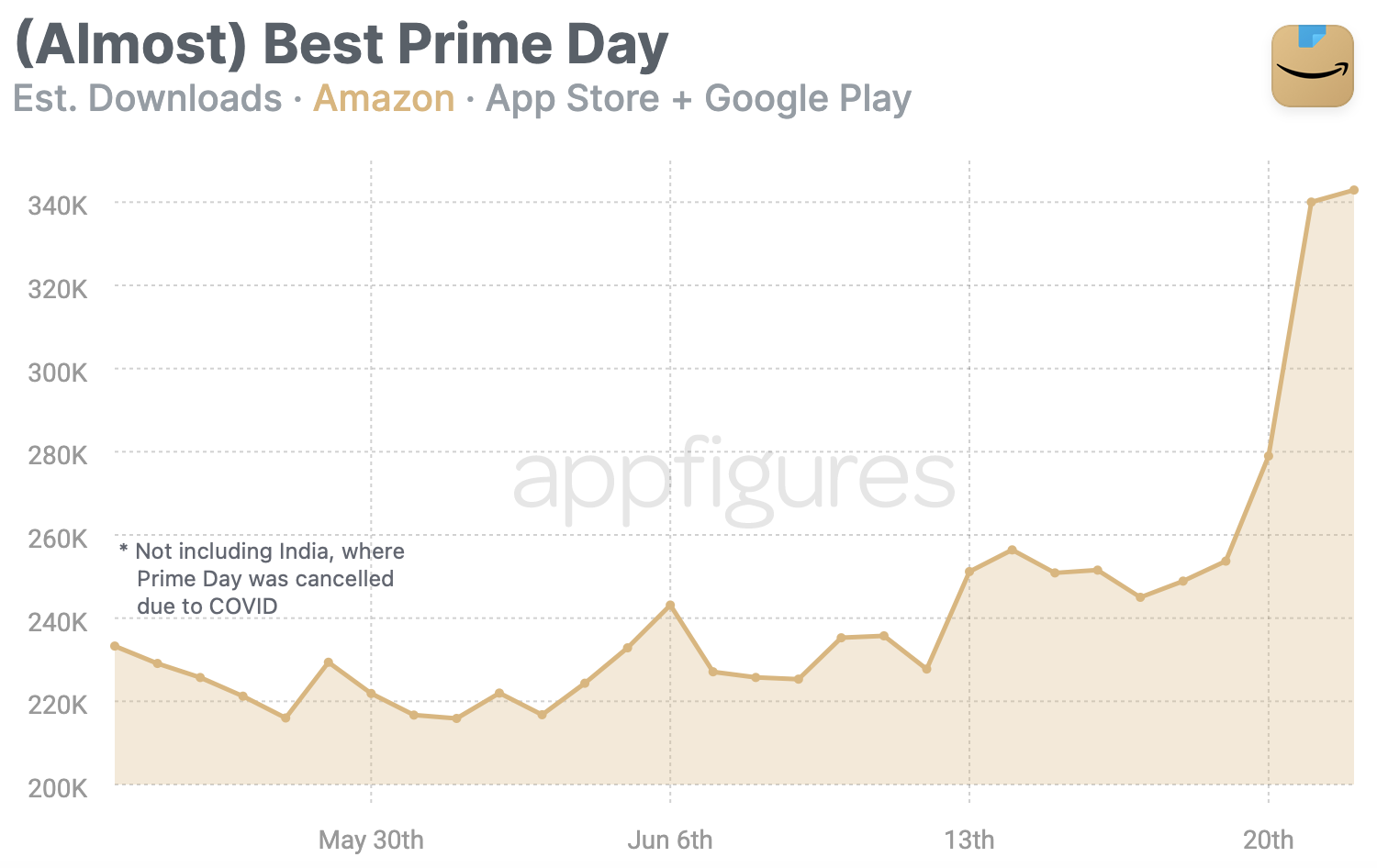 On Monday and Tuesday, Prime Day 2021, Amazon's mobile app saw a bump of 43% in downloads globally* across the App Store and Google Play. According to our estimates, in those two days, downloads exceeded 700,000 downloads from iPhones and android all over the world, not including India.

I took India out because Prime Day didn't happen there this year, and it's Amazon's biggest market in downloads, so it would have skewed everything.

Why's this important? 700K new users is higher than the last two Prime Days (in 2019 and 2020) and comes after a year where almost everyone moved much of their purchasing online because of the pandemic.

Back in 2018, Amazon had its most successful Prime Day of downloads, adding a little over 800,000 downloads in two days. But that was with ads running during the World Cup (and a seemingly endless ad budget), which isn't the case this time.

If you wrote growth off for Amazon because of market saturation, you might want to reconsider that.

Banking is traditionally boring and not something many of us want to think about but rather something we need to do.

You can see that in how mobile banking apps are built and marketed.

In recent years we've seen a few mobile-first/only services try to challenge that, but it was mostly an improvement on the traditional and not something completely different.

Oxygen is trying to be different.

Instead of selling features or benefits, the new(ish) bank-by-app is trying to sell itself as a lifestyle choice. And it's targeting freelancers and small businesses.

Downloads have started growing over the last few days, going from a few hundred to more than 12,000 on Tuesday, according to our estimates. Since its growth sprout began last Thursday, Oxygen made its way into nearly 22K devices, with iPhones beating out Android two to one.

The real question isn't whether there's demand for this type of app but rather if it can last. One before it didn't, and that's sure to make it harder for Oxygen to gain momentum.

They do offer temporary credit cards, which I personally think is a great feature. It's probably not enough to get new users, but it's a nice one to have.