This Week in Apps #70 - ESPN, Dinsey, Instagram, and more

Sports dominated this week. EURO 2020 finals (soccer), NBA finals (basketball), MLB All-Star game (baseball), and a UFC fight (that carried a lot of trash talk before and after) kept many different audiences engaged. It should come as no surprise that there was a lot of demand for streaming all of these, and guess which app had it all? 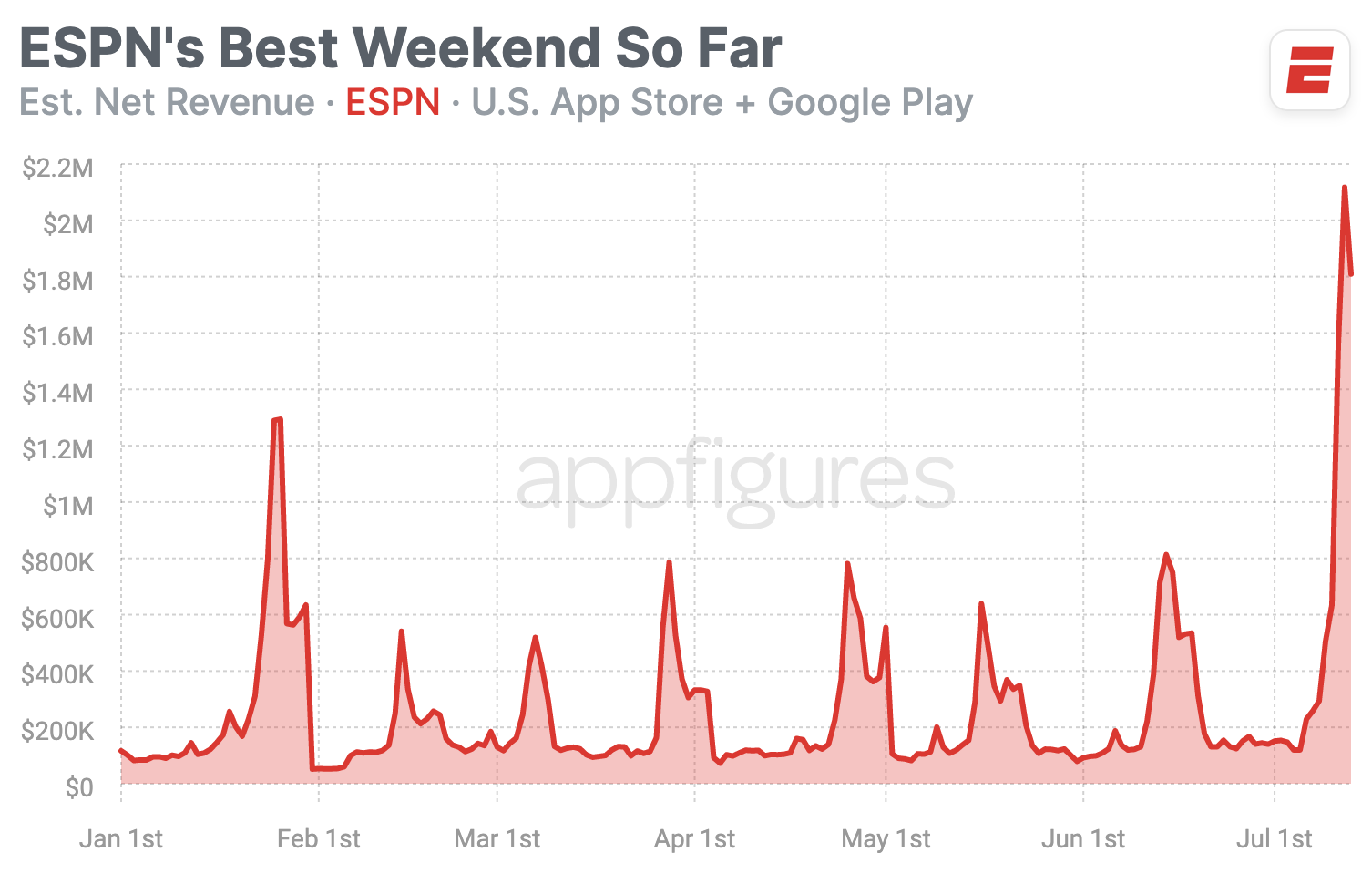 That's why this weekend was ESPN's biggest in revenue, and by a lot!

Net revenue in the U.S. this weekend (7/10-11) added up to $3,000,000, according to our estimates. What's more interesting is the split between stores. We'd expect the App Store to be responsible for a considerable chunk of that total, but the weekend was almost even. The App Store was responsible for 54% and Google Play for 46%, indicating demand for sports is very strong across the board. Not really surprising, but it's nice to see it in numbers.

The big deal: This weekend out-revenued all other weekends since the app started earning directly with in-app purchases. Streaming sports is not just a lockdown activity but rather a super convenient way to consume more content. That's right, sports is content just as much as a movie is these days.

Think about it - How long is a movie vs. how long is a sports match (on average)? Pretty similar. Sports streaming used to be, and still is to some extent, a highly complicated field with lots of weird rules only those who deal with it fully understand. So were movies, but thanks to the original content revolution Netflix started, things are getting much simpler. I expect to see that happening for sports just as well, which could mean more apps that stream them.

It's been a while since I looked at download trends for Instagram. Why, you ask? Because they've been pretty flat for a looooong time now. Instagram is very popular, gets a lot of downloads every day, and it's been around long enough that growth is much harder to achieve than its younger rival, TikTok. 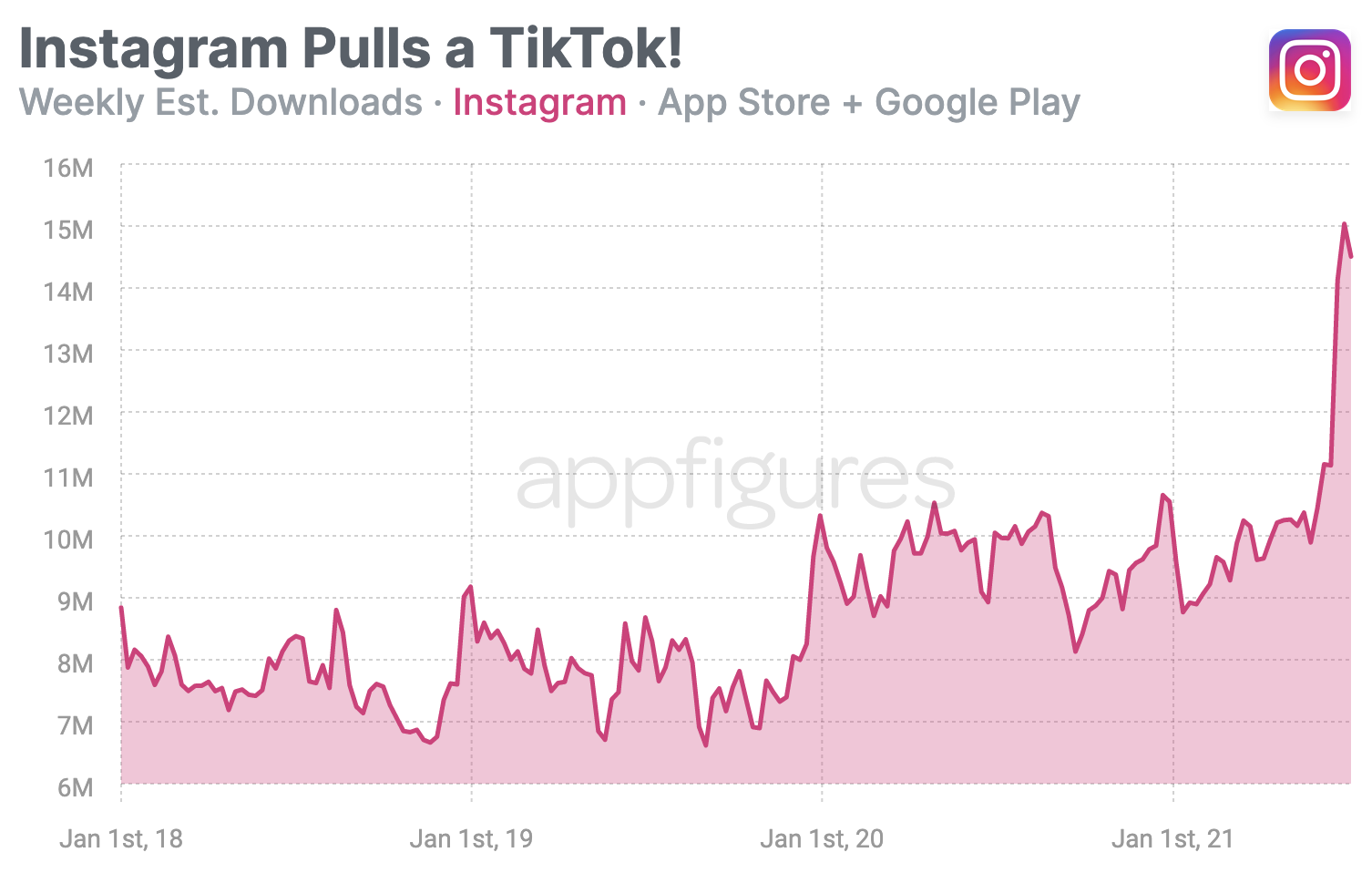 That could change in July!

For Instagram, the last week of June and first week of July saw higher downloads than any other week this year, last year, and even going back to the beginning of 2018.

Downloads for the week of 6/28 topped 15.2M, a whopping 60% increase over the average weekly downloads this year, according to our estimates. The week after, 7/5, downloads remained high at 14.5M and are looking very strong this week as well.

But, how? India. Instagram's download surge comes mainly from India, where TikTok has now been banned for about a year. Several local competitors like Josh are trying to fill TikTok's gap and are gaining momentum, but that just means more opportunity for Instagram.

3. The most downloaded apps in June

This week we released our monthly report of the most downloaded apps in the world for the month of June. 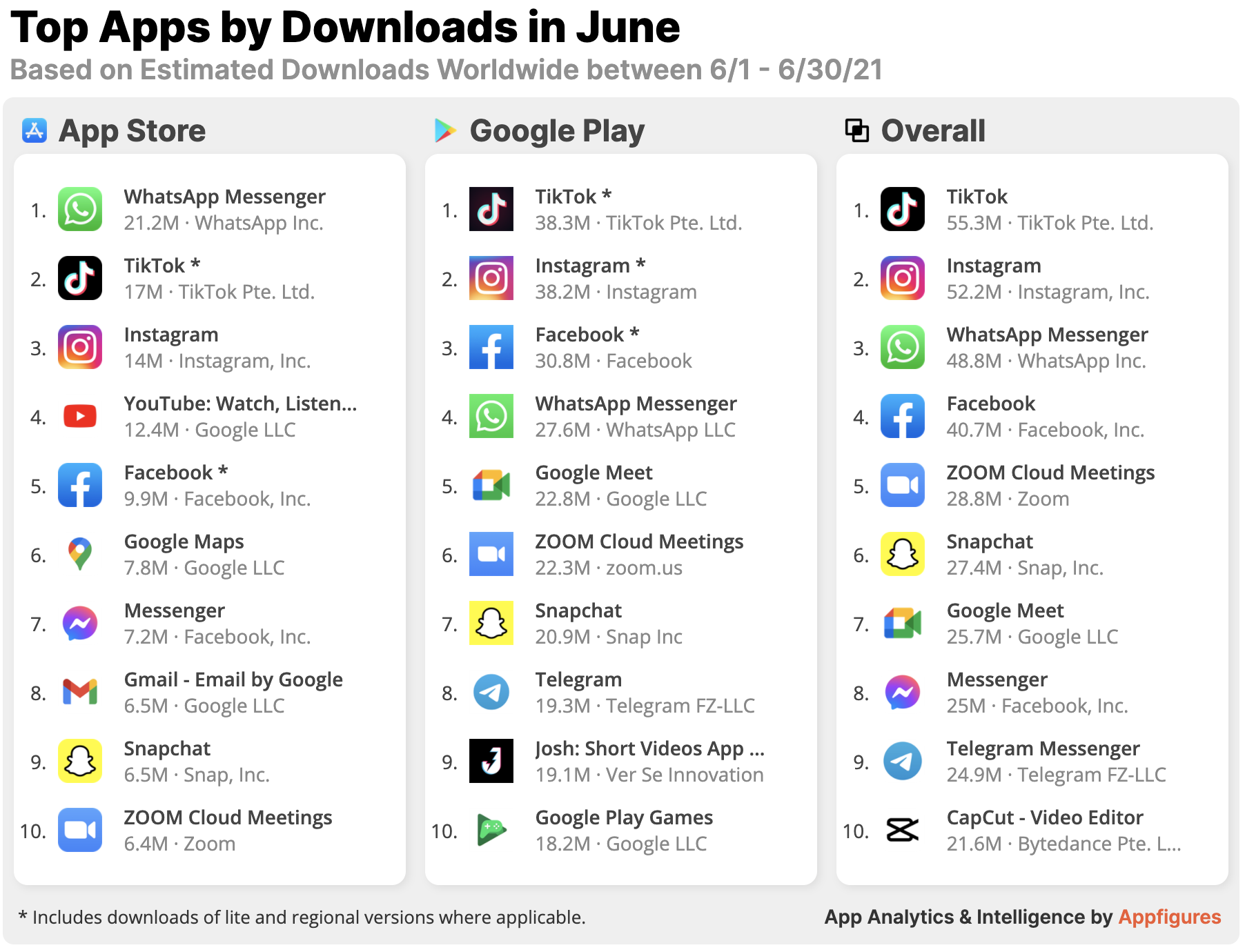 TikTok, the reigning champion, was again the winner, bringing in more than 55M downloads in June from the App Store and Google Play, according to our app intelligence. Instagram was right behind it, followed by other Facebook properties WhatsApp and Facebook's Flagship app.

One thing that's a bit different this month is that TikTok wasn't the most downloaded app in the App Store. WhatsApp snagged the #1 spot in the App Store in June with 21.2M downloads.

Check out the complete report: The Top Mobile Apps in June by Downloads and Revenue

When it comes to money, however, the list was fairly different. YouTube, Tinder, and HBO Max dominated our revenue table in the U.S., earning more than $150M of net revenue between them, according to the report.

Black Widow, the MCU's latest episode, opened last weekend, and unlike F9, which went with the (very) old model of theaters only, Disney+ released Black Widow with its hybrid premium model. 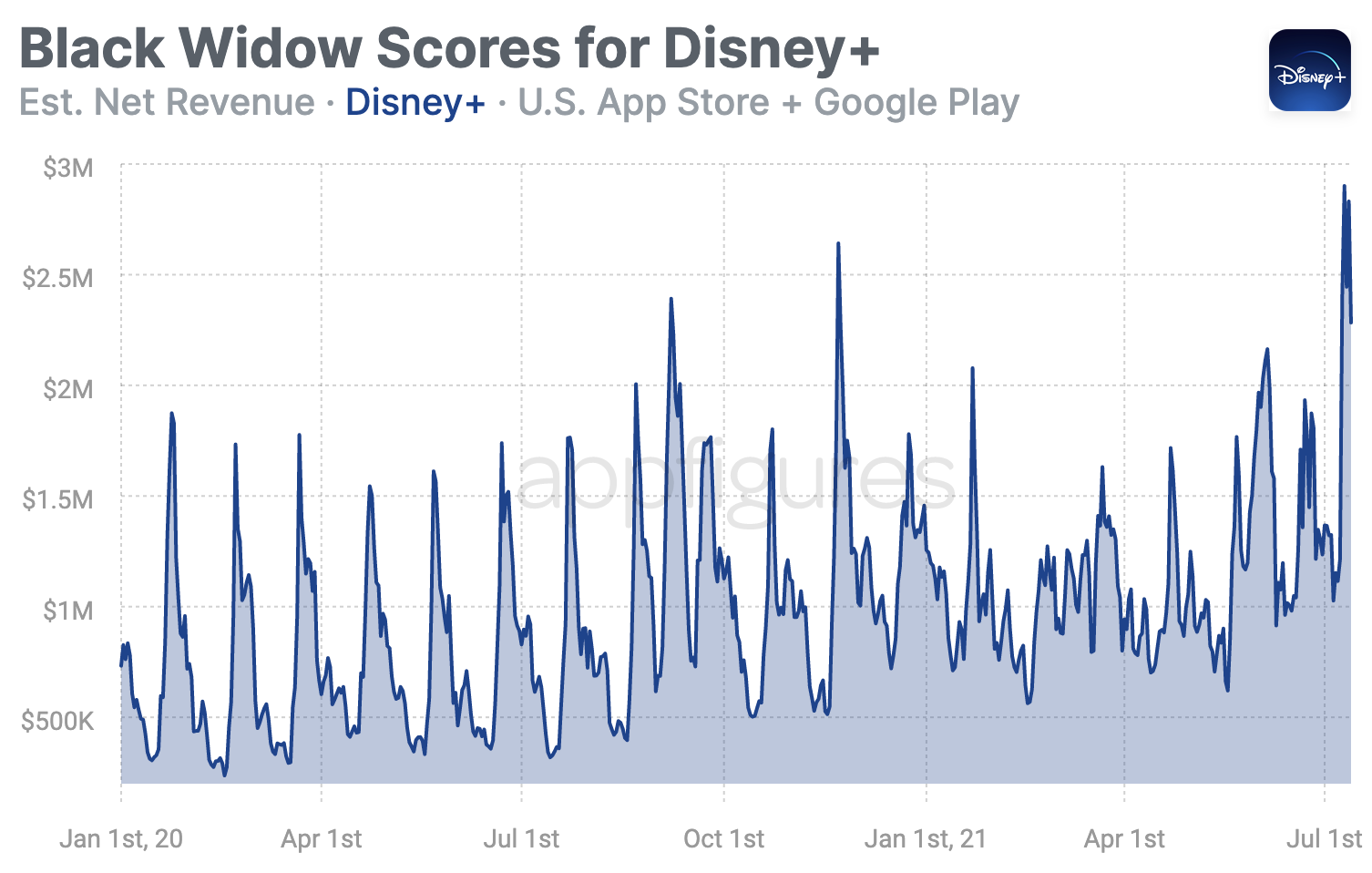 App revenue climbed to the highest it's ever been across the App Store and Google Play last weekend. Between Friday and Sunday, Disney+ earned $7.9M in net revenue, meaning after Apple and Google took their fee, in the U.S. alone.

And the trend hasn't sloped down yet. The between Monday and Wednesday, Disney+ hauled in another $7.5M of net revenue in the U.S. for a total of $15.4M since launch.

I criticized Disney+'s premium pricing in the past, and even though the numbers look good, I still think this is experimental for Disney and for the industry. I suspect other streamers are waiting to see how this pricing model behaves when not attached to a mega-brand like the MCU.

5. Travel downloads up 86% from last year

This week's indication that the unlockdown is happening comes from the Mobile Download Index. In the last year, one category grew more than all others in the U.S. App Store — Travel. 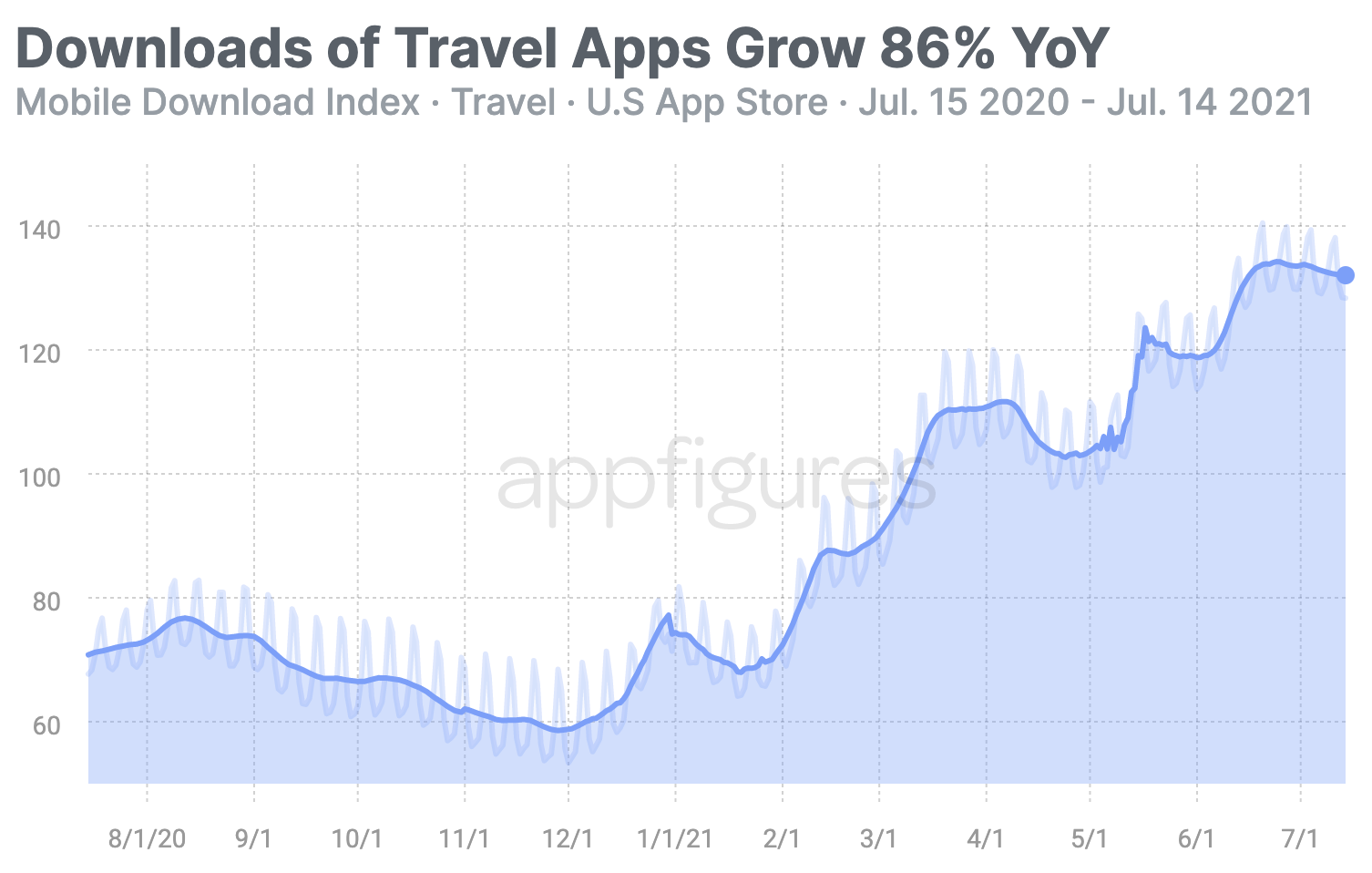 The Mobile Download Index looks at downloads of the top apps over time and compares them to a date in the past to show how the category is behaving over time. And over time, the Travel category has behaved very well.

Travel apps took a massive hit during lockdowns because they, for the most part, weren't necessary. Now that things are opening up, airports and roads are busy, and cruise ships are making their way to port, it makes sense that demand will return.

Looking at some of the top apps in the travel category, we can see that popular apps like Uber and Lyft have nearly doubled when compared to a year ago. New variants, slower vaccination rate, and a growing infection rate still mean we're not out of the woods just yet, which means that when we are, I expect downloads of apps in this category to grow even higher than before. Which means more apps will compete for those downloads.