If you've been paying attention to the news or the Air Quality Index lately, you'd know that a lot is going on right now. Fires, storms, and draughts are forcing us to be more aware.

What does that mean in terms of apps? More money! 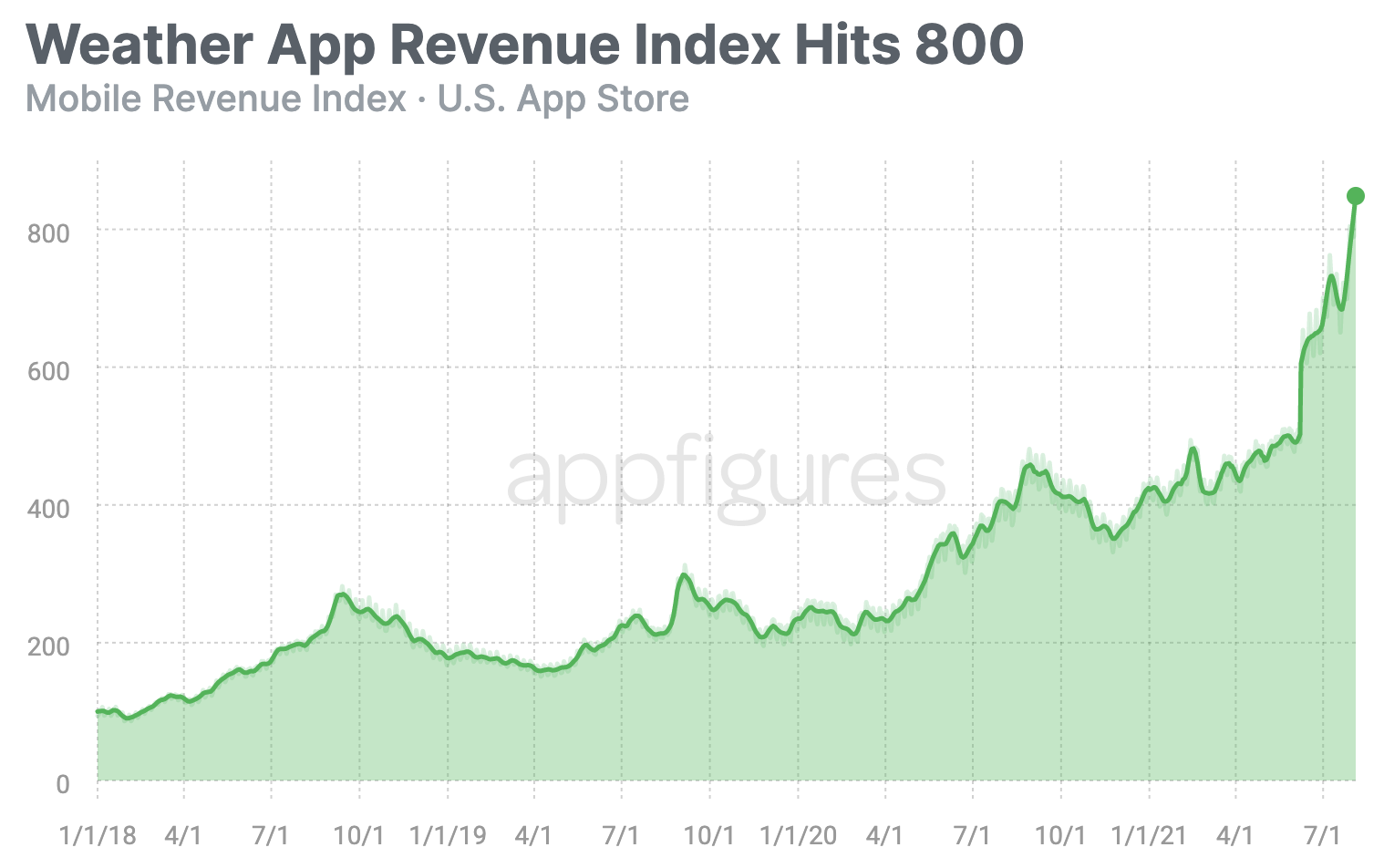 According to the Mobile Revenue Index, revenue in the Weather Category in the U.S. App Store has crossed 800 for the first time! As of right now, the index stands at 848.44, which means the category has grown more than 8x since 2018.

Lead by The Weather Channel, Weather is one of the smallest categories, in terms of the number of apps available, in the App Store, and Apple owns two of them, which means competing isn't exactly easy. But with such growth, the category is becoming much more lucrative.

We just published our monthly report of the most downloaded apps in July, and it comes with a small surprise. 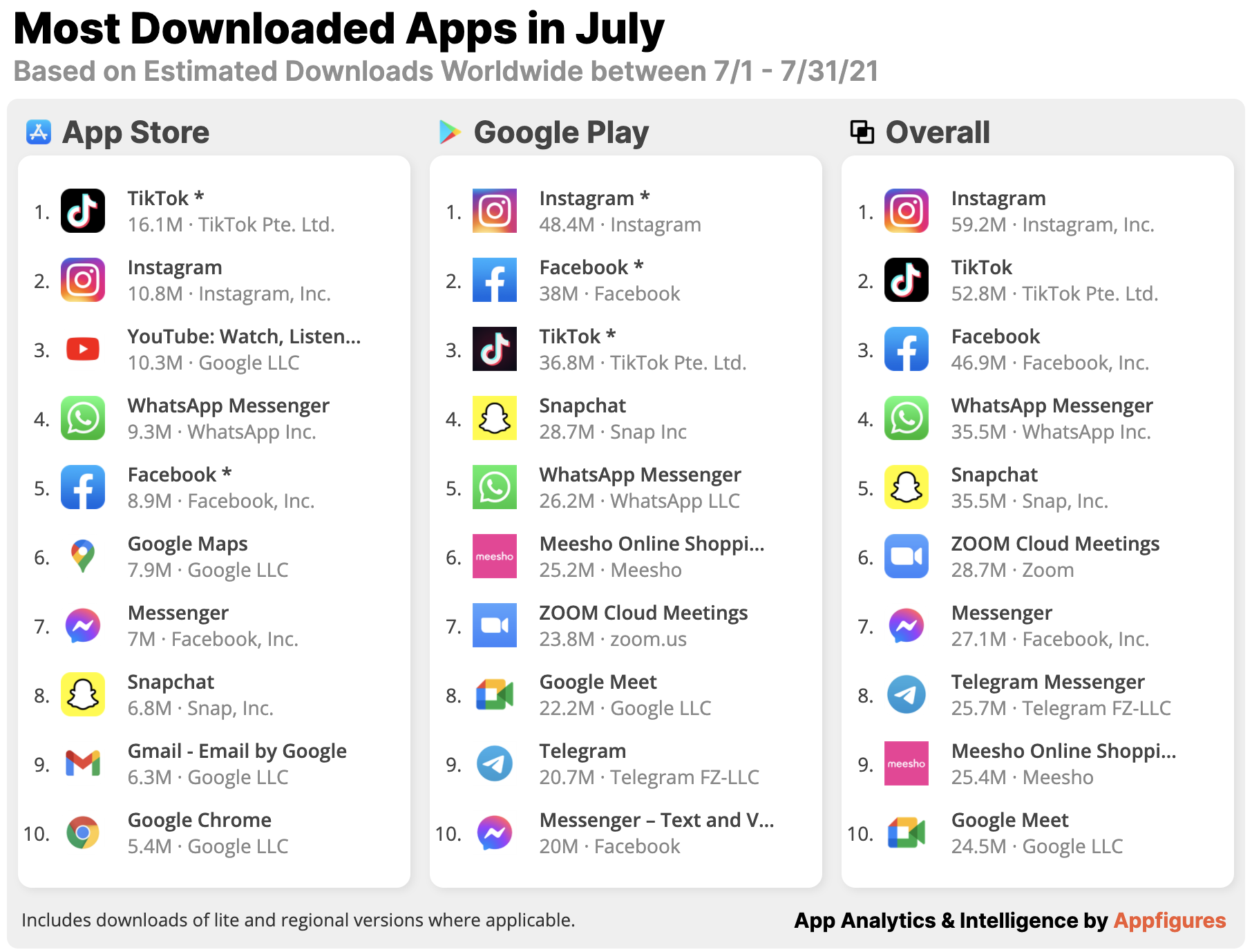 TikTok wasn't the most downloaded app. Rival Instagram took its crown after a strong rally on Android that culminated in more than 48M downloads from Google Play alone. It ended the month with 59M downloads, leaving second place for TikTok, which saw 53M downloads in July, according to our estimates.

Facebook, WhatsApp, and Snapchat round off the top five overall.

Together, the top 10 most downloaded apps recorded 361M downloads globally and across stores, according to our App Intelligence.

Check out the full report for more analysis + the top apps by revenue.

Buy now pay later services have seen a serious boom in the last few years. A combination of more time to shop and easier online shopping tools is leading many to find ways to spend money they don't (yet) have.

Square wants to join the wave, and they're doing that by acquiring AfterPay, an Australian company that does just that.

I've looked at the buy now pay later market before when Klarna announced a big raise back in 2020, so this announcement was a good time to see how the landscape is looking in 2021. 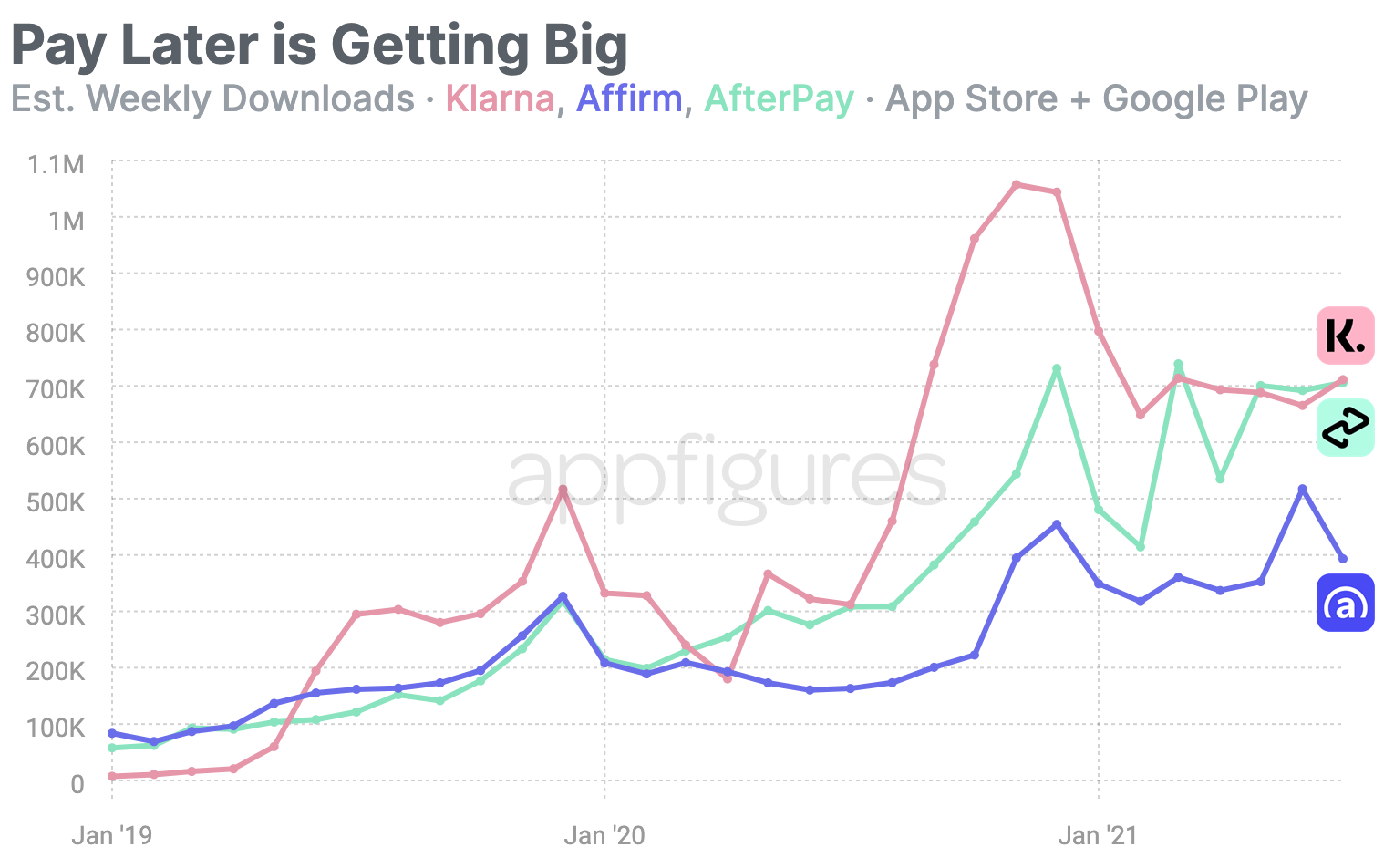 Klarna, Affirm, and AfterPay lead the way in this industry.

Affirm used to be the go-to solution back in the day, but Klarna took over in 2019 and hadn't looked back since. AfterPay has had its growth sprout in 2020, and has overtaken Affirm—and as of last week, Klarna—in downloads.

In 2020, the three recorded a combined total of 13M downloads. Klarna lead with 6.4M followed by AfterPay with 4.2M, and Affirm with 2.7M, according to our estimates.

While Klarna's growth continues in a fairly stable fashion, both AfterPay and Affirm are already seeing more downloads in 2021, which is nowhere near done, than in all of 2020. Expect massive growth for AfterPay this year both because it's a part of Square and also because it was on that path anyway!

Thinking out loud. Is this type of borrowing good overall? As adoption of BNPL apps rises, so is spending. While installments can make the difference between buying something you really need now vs. having to wait, it could lead to overspending. I bring this up because that sounds like something regulators are not going to like, and seeing as apps are the gateway, the battle will likely play on mobile.

If I'd ask you to name a company that can give you a ride, deliver food to your door, and rent you an electric scooter, what name will you give me?

Well, the one I'm going to be talking about checks all the boxes and isn't Uber.

Bolt, a European company that offers all of the above, raised $713M last week to compete with Uber. It's not exactly how they said it but that's really what it's all about.

Is Bolt actually worth it?

Let's have a look at growth using our App Intelligence, starting with rides, which is Bolt's core value. 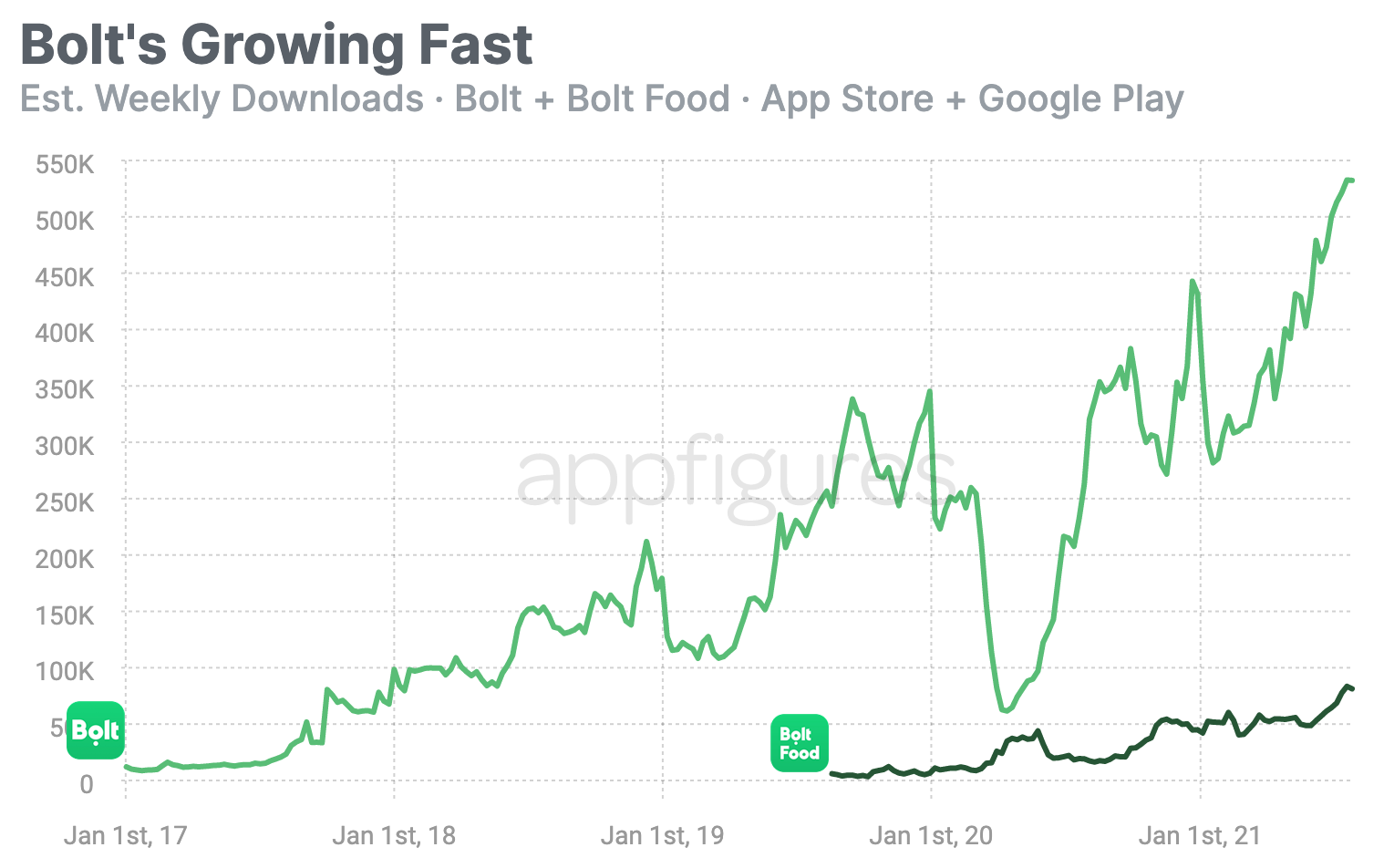 Since 2017, Bolt saw downloads grow more than 44x. In numbers, it looks like just a few (12K per week) to more than half a million last week. The downloads come from pretty much all over. South Africa, Ghana, Ukraine, the UK, Poland, and Mexico are at the top, but the list is long.

The only two countries from this list where Uber wins in terms of downloads are Poland and Mexico.

In 2019 Bolt introduced its food delivery service. Much like Uber Eats, Bolt Food connects hungry folks and restaurants via delivery people. While the numbers aren't as massive as the ride app, Bolt Food is also experiencing great growth right now.

Downloads started slow, with the app averaging 5K downloads per week in 2019. Lockdowns in 2020 pushed demand for anything that will deliver food up, and the app enjoyed a stretch of x10 downloads. That didn't last very long, but after the big wave ended, growth continued at a healthy pace.

Bolt Food started 2021 with around 42K weekly downloads and has now reached more than 80K downloads, twice as many and with no reason to stop growing.

Should Uber be concerned? Probably. More than 60% of downloads for Uber Eats come from outside the U.S., and as we've seen in the U.S., food delivery is on the rise, and competitors aren't afraid to take a financial hit as they aim to get traction. This raise makes it easier for Bolt to do just that and get to more devices in Europe. After that, maybe even the U.S...

5. What a month for Disney+

July was a busy month for Disney+. It opened with Black Widow, which had fans waiting to see since 2004, and ended with The Rock's attempt to take on the Mummy franchise, with a lawsuit sprinkled somewhere in the middle.

But, it was all worth it! 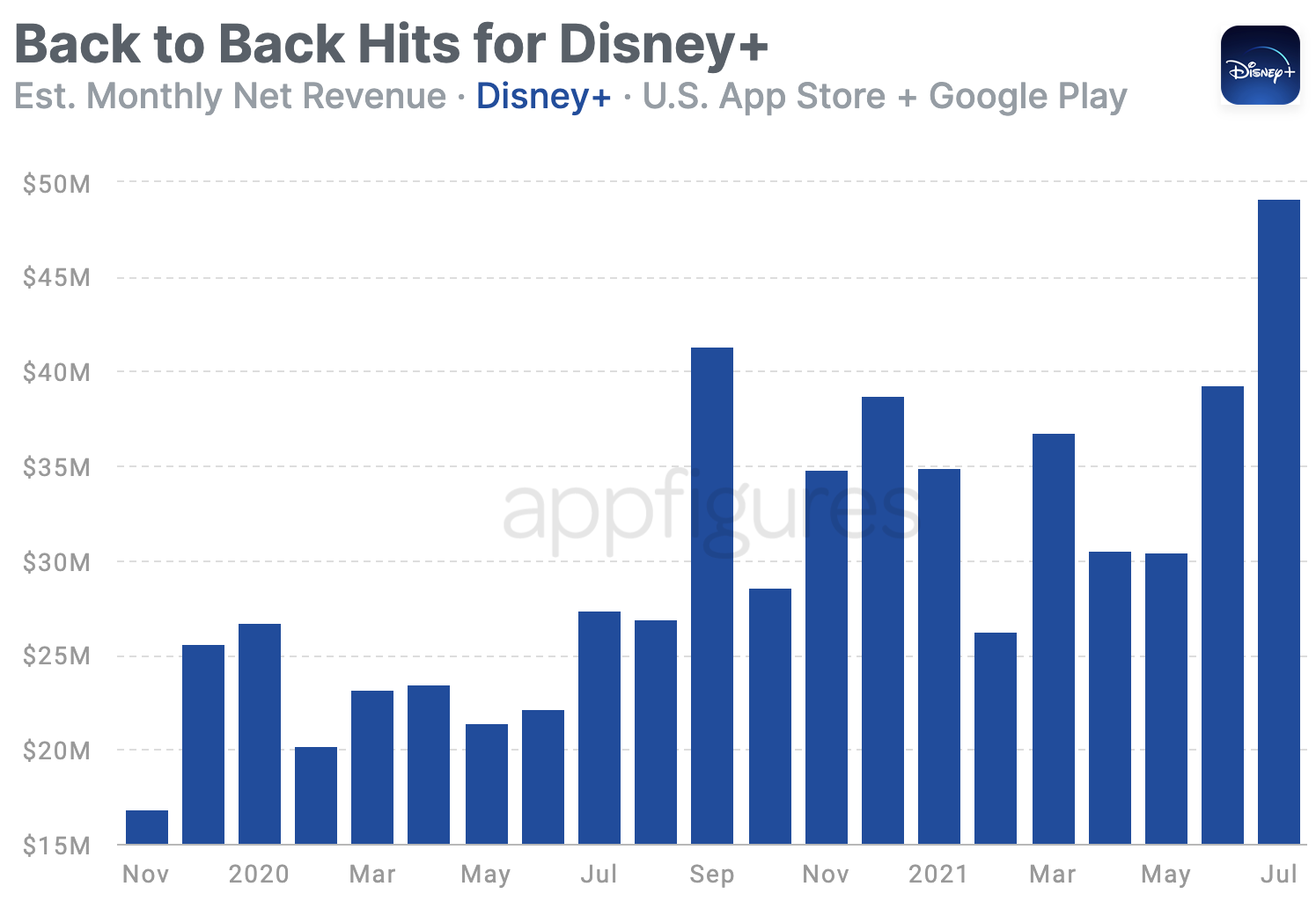 According to our estimates, Disney+ added $49M of net revenue to its bottom line from the U.S. alone in July. The biggest month of revenue in the app's history, and a 29% increase over June.

That also lead it to catch up to HBO Max in our monthly rankings by revenue for the month.

So, back to that lawsuit for a minute.

Scarlett Johansson, aka Black Widow, is suing Disney for taking a hit on box-office revenue by streaming it on Disney+ at the same time. That lost Scarlett, who's getting by a percentage of box-office revenue, a considerable chunk of change, according to her lawsuit.

Zooming out a bit, this puts an interesting spin on the streaming race and the costs associated with getting traction. I've shared my thoughts on the importance of getting on as many devices early because viewers will eventually pick a small number of apps and stick with them. It looks like Disney understands this and needs growth at all costs.

I don't know if Scarlett will win her case, but I'm pretty sure lawyers for many actors are going to be busy updating agreements to include streaming revenue, which will make growth even more costly.