1. This Looks Weird - The Most Downloaded Games in September

This week I rounded up the most downloaded games in the world in September and... There are a few weird things here.

But let's start up top. 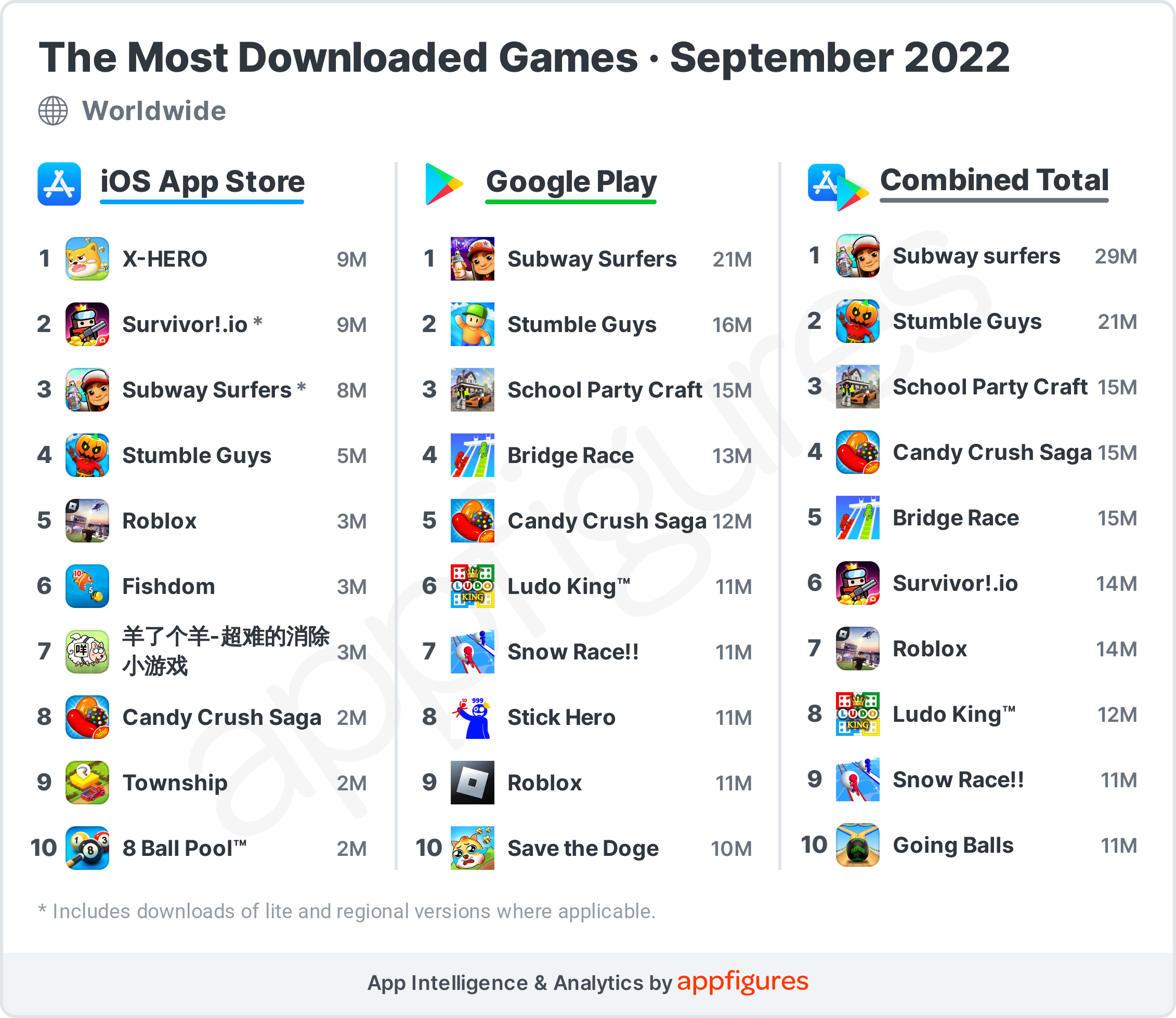 Subway Surfers was the most downloaded mobile game in the world in September. The title collected 29 million new downloads from the App Store and from Google Play in September, according to our estimates.

Subway Surfers has been the #1 title in our ranks since April, but September's haul was the lowest to date.

BTW. This month I combined the Chinese version into the main version which leads to a higher total.

Stumble Guys earned the second spot with 21 million downloads. School Party Craft, Candy Crush, and Bridge Race round out the top 5, all three added 15 million new downloads, each, according to our estimates.

There are two things in this list that I want to point your attention to:

This is the second month we're seeing apps from China rise up our top ranks. I expect this trend to continue.

Together, our App intelligence shows that the top 10 most downloaded games in the world added 157 million new users in September. That's a significant drop when compared to August's numbers. Like the drop we saw with apps, this is the result of summer ending.

2. Candy Crush is Unstoppable! The Highest-Earning Games in September

This week I crunched the numbers and ranked the highest-earning games in the US in September, and unlike downloads, this list is pretty consistent. 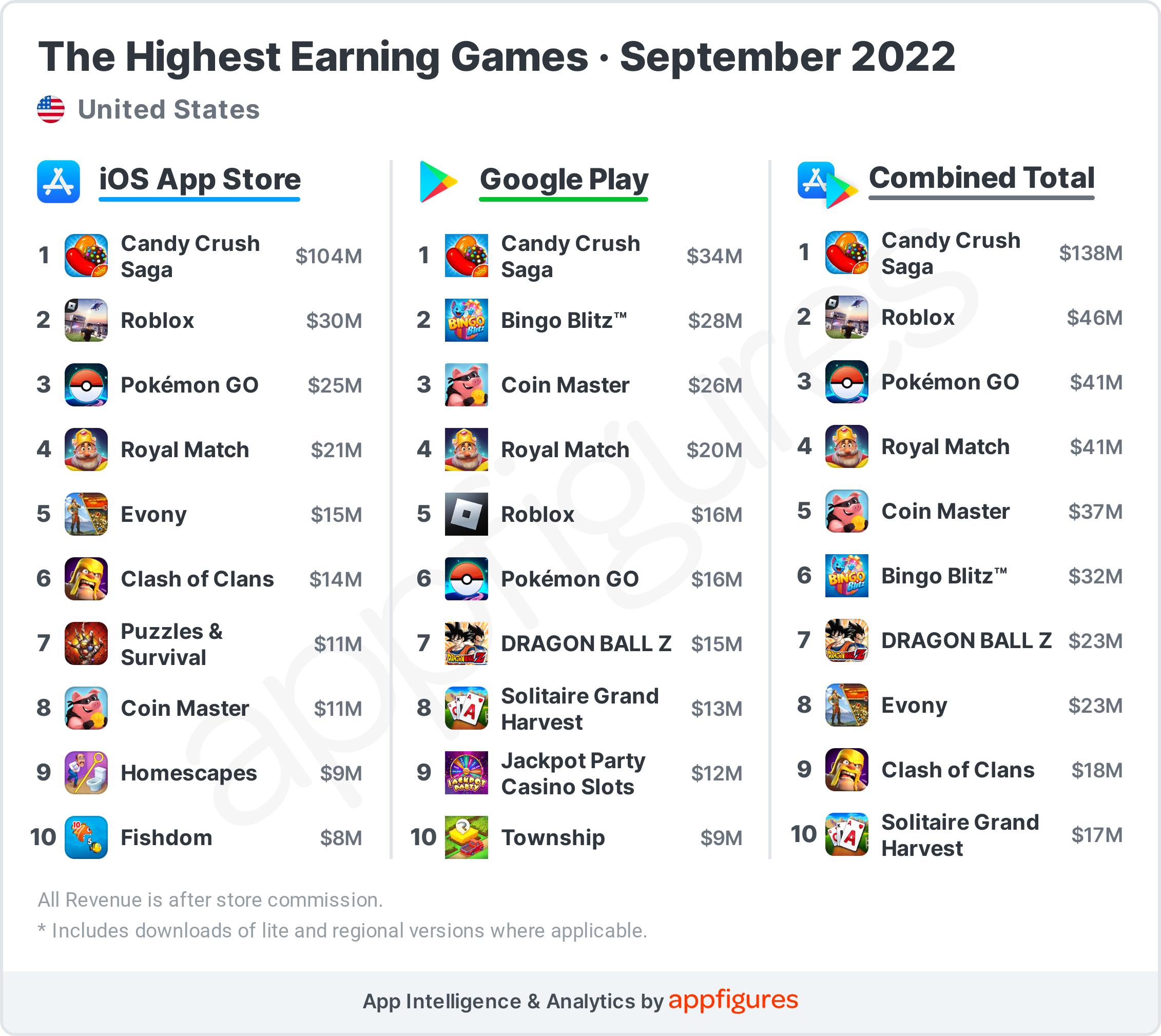 In first place we have the king, Candy Crush Saga! The title has been the highest-earning game in the US consecutively all year. It ended September with $138 million of net revenue, that's after giving Apple and Google their fees, according to our estimates.

So far in 2022, Candy Crush Saga has already earned $1.2 billion in net revenue. Most of the money came from the App Store, which is pretty normal for both apps and games these days.

Roblox, which has been the runner up for almost as many months, ended September with $46M of net revenue, far lower than the summer months.

Pokémon Go, Royal Match, and Coin Master, the incumbents, rounded up the top 5 list for September.

Together, the top 10 highest-earning games brought $418 million of net revenue in September in the US, according to our estimates. That's a bunch lower than August, which I suspect is a result of the end of summer.

A few weeks ago TikTok rolled out a BeReal clone called TikTok Now to try and slow down the massive growth of BeReal.

In the US, the feature was bundled into the main TikTok app, but outside of the US it rolled out as a standalone app by the same name. 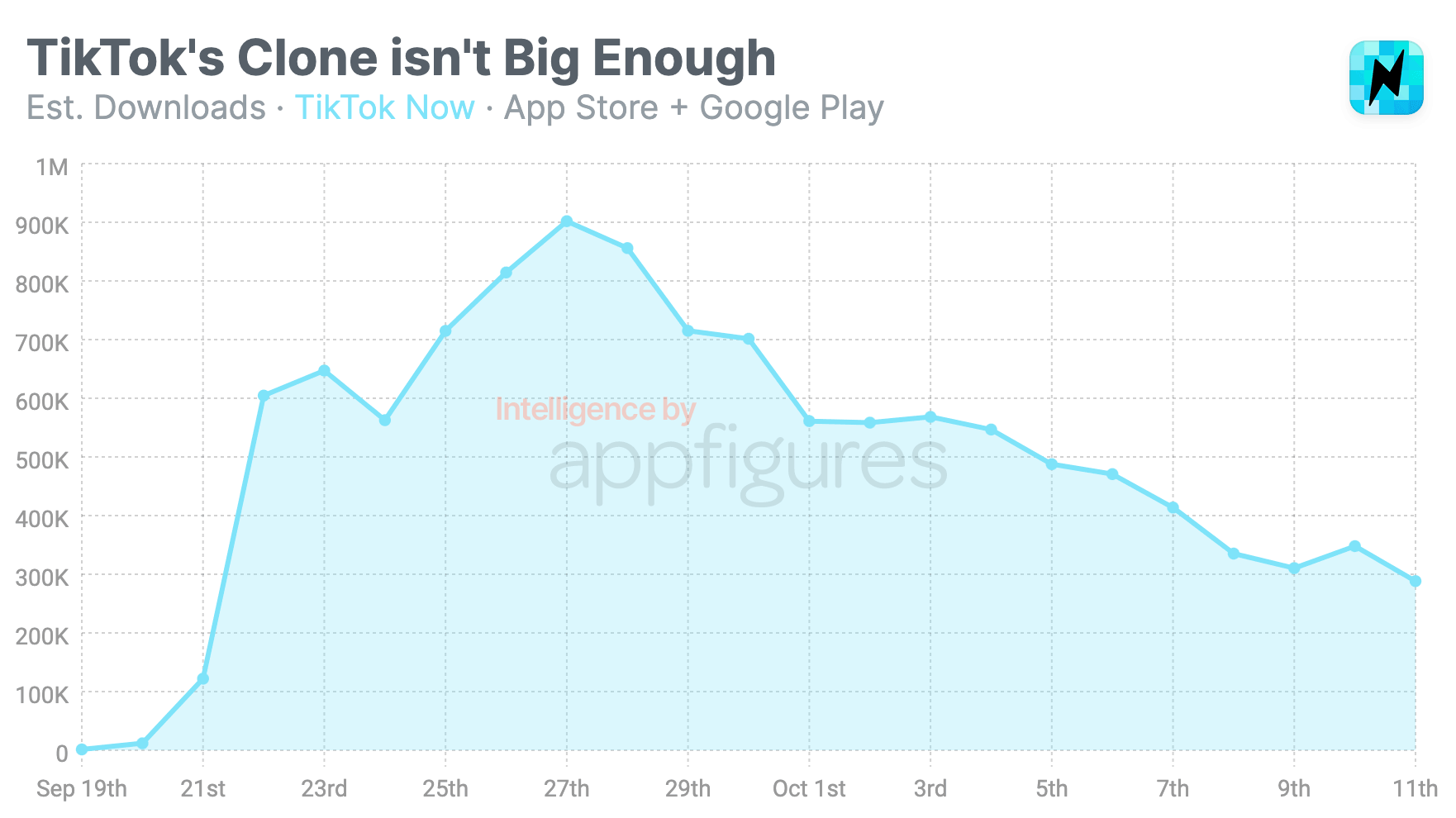 The app, which launched in mid September, saw downloads rise quickly. A little over a week after its release, TikTok Now had 900K downloads in a single day! The rise was fairly sharp, but with TikTok promoting TikTok, that's exactly what I'd expect.

Downloads sloped down after the big peak, but are still in the hundreds of thousands every day. Again, not very surprising considering it's TikTok featuring TikTok.

According to our estimates, about 70% of the downloads are coming from Google Play.

10M is a nice number, but, and this isn't something I thought I'd be saying, that just isn't enough for TikTok. BeReal beat it on downloads in September, which is an amazing accomplishment considering BeReal isn't even strong on Google Play right now.

I'm not entirely sure why TikTok chose to split this feature into a full app, or why it only did that outside of the US, but I'll continue to follow its performance and see how it compares to the app it copied.

This week a new app rose to the top of the charts in the US, nudging BeReal and TikTok down. I initially thought it wouldn't last, but so far this new entrant has been #1 in the US since Tuesday.

That's a lot more days than I'd expect for an app that's only useful to young students in a handful of US states. 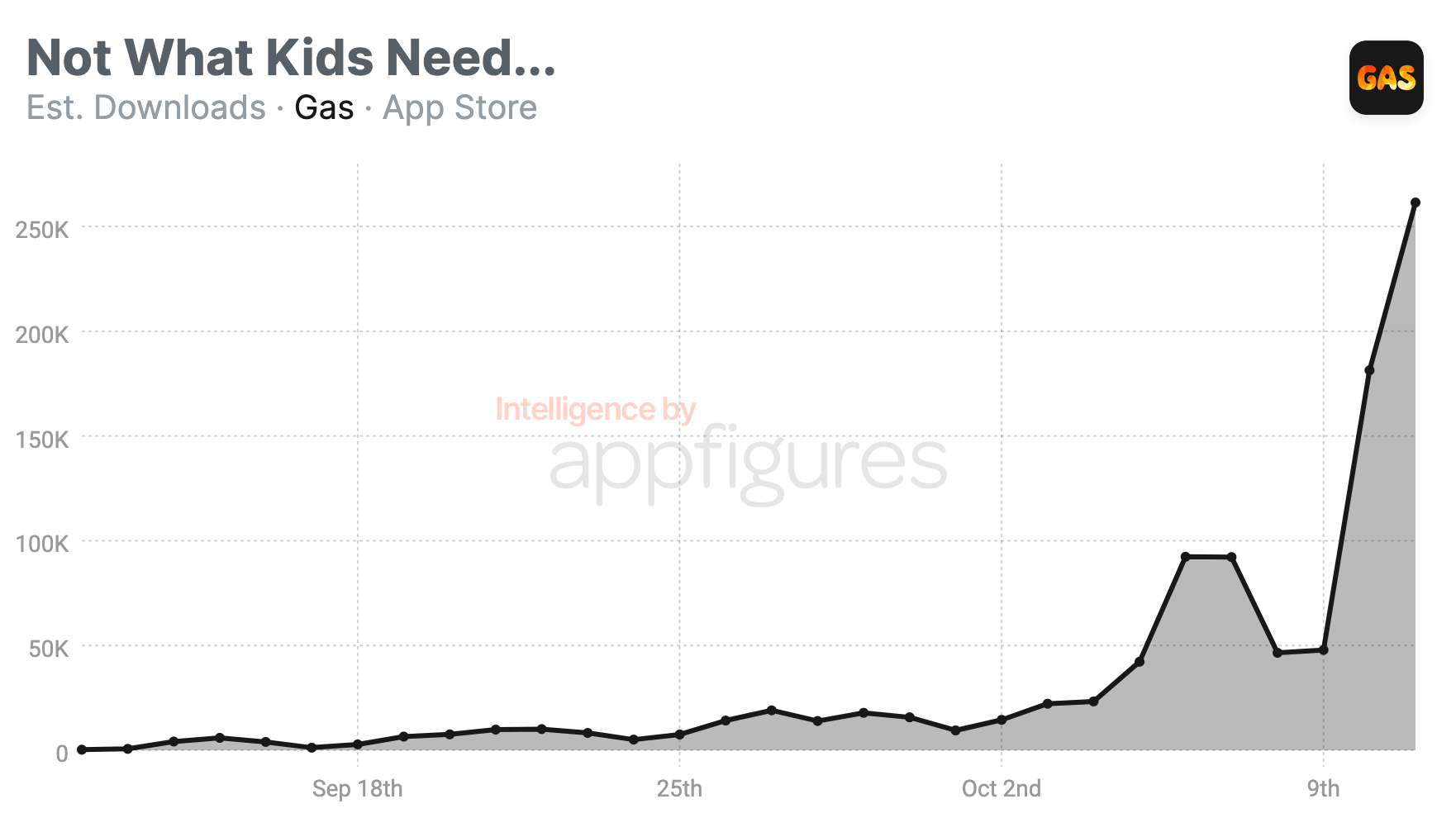 So what's Gas? An anonymous communication app targeted at kids who are too shy to talk to others and instead want to hide behind a screen. Yes, that's my slightly negative spin on it, but really, does the world need another communication app? The last few have all ended up shutting down because they turned into a breeding ground for bullying.

It comes from the creator of tbh which was acquired by Facebook and then erased a few months later.

And this app is targeting kids. A bit too crazy for me.

Back to numbers for a moment though - We estimate that by Tuesday, Gas was downloaded by a million people. Keep in mind, the app is only available in the US and only on the App Store, which really limits its reach. Also limiting its reach is that it's only working in a small number of states.

Why only a handful? Why those particular ones? I don't know. But the creator promised it'll expand soon.

What I do find different in Gas that we haven't seen with other similar apps is that Gas seems to have a revenue model and actual revenue. So far, our estimates show those million users have given Gas nearly $100,000 in net revenue, which is what Gas gets to keep after Apple takes its fee.

The revenue comes from an in-app purchase called "god mode" which costs $6.99/week.

An interesting note - Gas isn't technically an app but rather a game. Well, it isn't, but its developer listed it as a game to gain a competitive edge when it comes to ranks. It's an interesting technique but a pretty misguided one if you rely on organic discovery. Which leads me to believe this isn't the result of organic discovery or crazy word of mouth...

It's now been moved to the Social category where it really belongs. Let's see if anything changes.

Uber has had a very strange few years. On the one hand, demand for its flagship app dropped significantly when lockdowns hit, but then Uber Eats became red hot as people were stuck at home.

Under the hood there was another shift - many who wanted to free themselves from the office found a more flexible working solution in Uber as drivers.

Uber is now seeing the most new drivers it's ever seen. 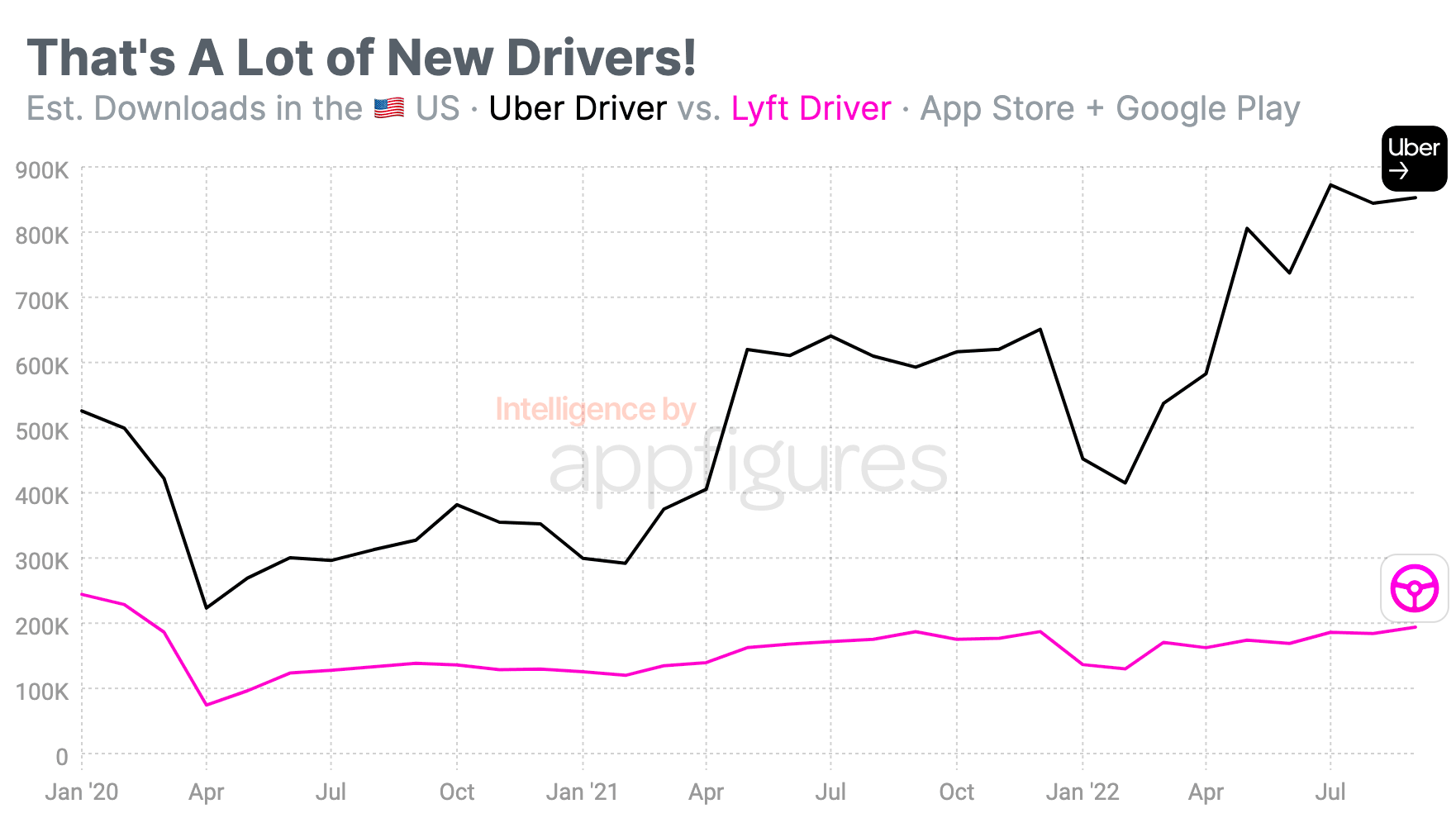 In September, Uber Driver, the app you need to be able to drive for Uber, was downloaded 853K times in the US. It was downloaded a similar number of times over the summer as well, by far the best three month stretch for the service.

Uber is facing a bunch of challenges, from the leak it experienced a few months ago that uncovered misguided business practices, to legal battles in many states. But it seems that those are irrelevant when it comes to growing its workforce.

So far this year, Uber Driver was downloaded by 6.4 million people in the US alone. That's a touch higher than 2021 and a bunch higher than 2020. And this year still has two busy months to go before the ball drops.

You might be thinking this isn't about Uber but rather about the gig economy growing. I had that thought too until I looked at downloads of Lyft's equivalent.

I wanted an apples-to-apples comparison so I limited the data I analyze to the US even though Uber has a global footprint while Lyft doesn't.

This isn't a change in the market but rather Uber's own doing.

Is there enough demand to handle this supply? I'll answer that next week when I'll look at downloads for Uber and Lyft's main apps.