ASO Teardown: Grubhub Earns Our First Ever A+

If you have a smartphone and are hungry, odds are you've used Grubhub before. Grubhub makes food delivery more convenient, but that's not an exclusive feature. Quite the opposite.

Uber Eats (which we did a teardown of a while back), DoorDash, and others offer pretty much the same food, a similar enough UI, and ultimately, the same delivery person. Yet, Grubhub manages to be the first result for most relevant searches.

In this ASO teardown, we'll analyze how Grubhub dominates its most important keywords.

Overall, Grubhub gets an A+, our first 🎉

Note: If you, your team, or your agency are working on Grubhub's ASO, please let me know. I'd love to mention you by name here.

Grubhub by the Numbers - Gotta Eat to Grow!

Here's how Grubhub is doing in the U.S. App Store based on our app intelligence:

Grubhub vs. Other Food Delivery Apps

Food delivery is a hot category. According to our estimates, category leader DoorDash has more than double the downloads of Grubhub in the U.S., which means Grubhub can double if they continue to push. When it comes to ratings, the gap is a bit wider, and we know those will come in handy for ranks.

Let's begin by analyzing the keywords Grubhub uses in the app's name and subtitle. Those send the strongest signals to the App Store's algorithm.

Food delivery is a pretty narrow yet popular niche, which means a few keywords earn most of the searches. Grubhub's name and subtitle are carefully crafted to touch on all of those competitive and popular terms.

Very well! "food delivery," the most popular keyword, and the one that all other competitors are obviously targeting, has Grubhub at the top, and that's the one that matters. The name and subtitle result in many combinations, but most aren't very popular. The ones that are, have Grubhub ranking well. 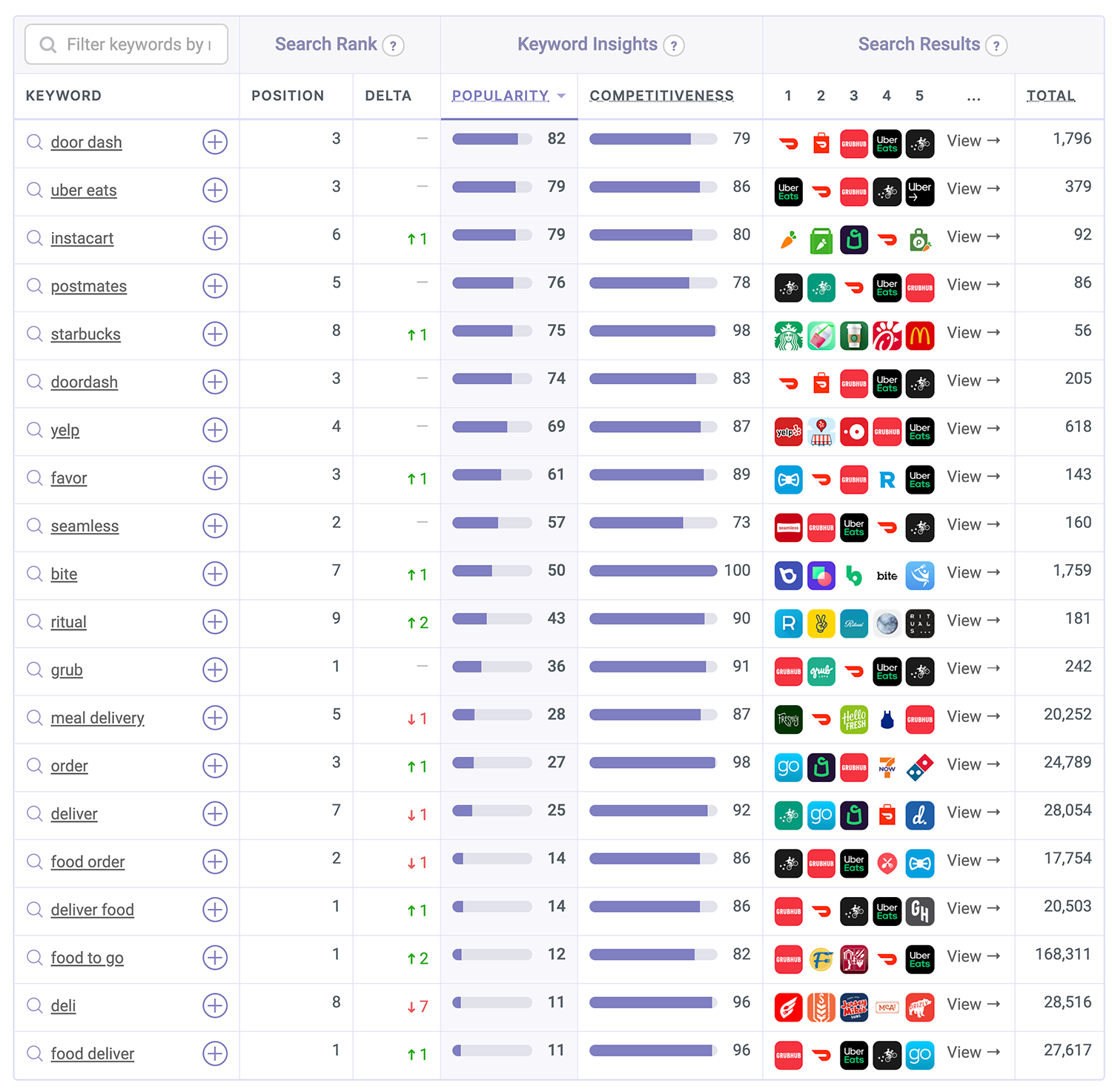 In addition to its target keywords, Grubhub seems to do very well with competitor names and restaurant names. Interesting, right? Well, it makes sense. More on that, below.

Now, let's reverse-engineer Grubhub's keyword list. The list isn't public, but we can attempt to uncover it by looking at all other keywords the app is ranked in. We believe it looks something like the following:

This keyword list is as far from standard as possible. It hits every big competitor Grubhub goes against, the most popular food destinations, and then a few variations of keywords already in the name and subtitle.

Let's break this down:

What a beauty! These screenshots really "sell" the app and follow every best practice we've covered in the past. The first screenshot is the hook, they all have actionable captions that highlight the app's benefits, and there's enough contrast to make reading the captions effortless.

The typography here is also outstanding, with a chunky font that makes the captions feel friendly and inviting.

No need. That's right. Although videos capture attention more quickly, in this specific case a video would probably convert less because a discount is as good of a conversion hook as you can ask for. While free offers like this aren't something every app can use, Grubhub can, and it does, and it's good.

Grubhub gives us a glimpse into what doing everything right looks like on the App Store. Competing with a very small yet fierce group of apps and over a very narrow number of popular keywords, Grubhub's strategy wins even though they aren't the leader in downloads. Yet.