Apple's and Google's algorithms may be black boxes and don't come with any documentation, but if you look at enough sets of results, patterns begin to emerge. Today we'll look at several sets of results and explain why they are the way they are, using real keywords, real results, and lots of tips you can use to improve your ranks!

We've covered bingo and poker in previous Teardowns, so naturally, we just have to look at trivia. The keyword is fairly competitive, and the algorithm recognizes a lot of apps there, which means keyword focus will be essential here. Let's have a look: 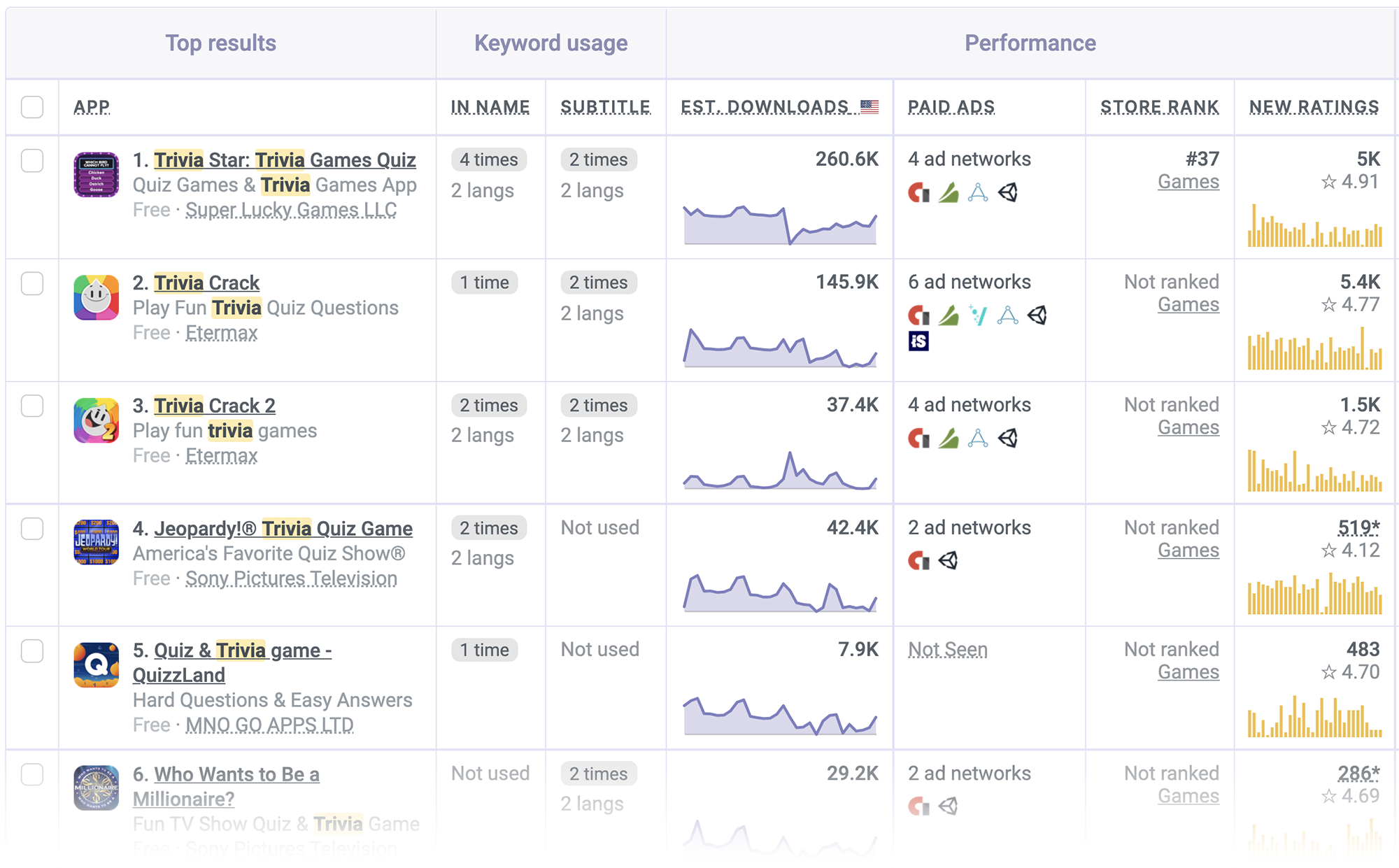 At first glance, I can already see a great tip about duplication hiding in plain sight.

See Trivia Star there, in first place? If we compare it with second place Trivia Crack, it's not immediately obvious why the algorithm sorted them this way. Trivia Crack has a more focused name and a bit more ratings. Fewer downloads, but we know that matters less.

A weird one, for sure! When evaluating the weight distribution for competitors, make sure you remove duplication first.

In third place, we have Trivia Crack 2. With fewer ratings and downloads, it's unable to beat its sibling. It can, however, stay ahead of Jeopardy! (4th) and QuizzLand (5th), both of which are sorted by new ratings.

One thing that's a little less relevant but still interesting is the number of results we see for trivia, which is the second-highest so far in all Keyword Teardowns I've done.

Are there really 42K+ apps that have the term in their name, subtitle, or description? I took to Explorer, our app search engine, to find the answer. 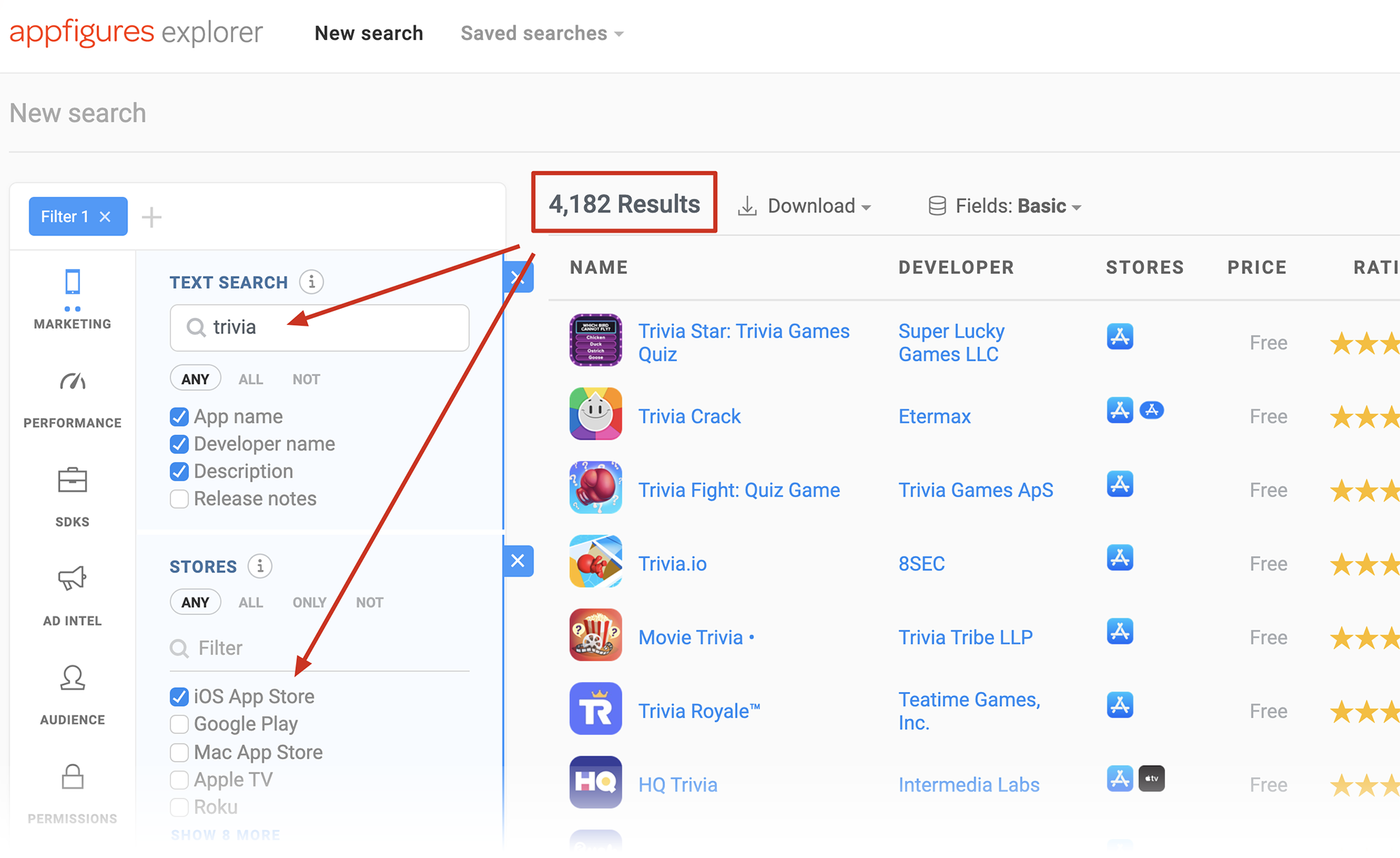 There are only 4,182 apps that have the word trivia in their name, subtitle, or description. An order of magnitude away. So, what's the algo smoking???

The algo is trying to be smart here (how appropriate!) and associate similar terms, then rank apps that fit. This yields results that include terms like quiz and guess and even words like puzzle. Because some apps will always have the main term in their name/subtitle, it's unlikely any of the ones that use those other terms will ever rank high, but they're still considered competition as far as search results go.

FYI - Explorer is a super useful tool I'm pretty sure many of you don't even know we offer. It's a powerful search engine that has metadata, app intelligence, and SDK intelligence built-in, making it the easiest way to learn about new app categories, identify competitors, and much more. Learn more about Explorer

Now, on to a popular niche in the App Store that's gotten much more visibility over the last year and a half. 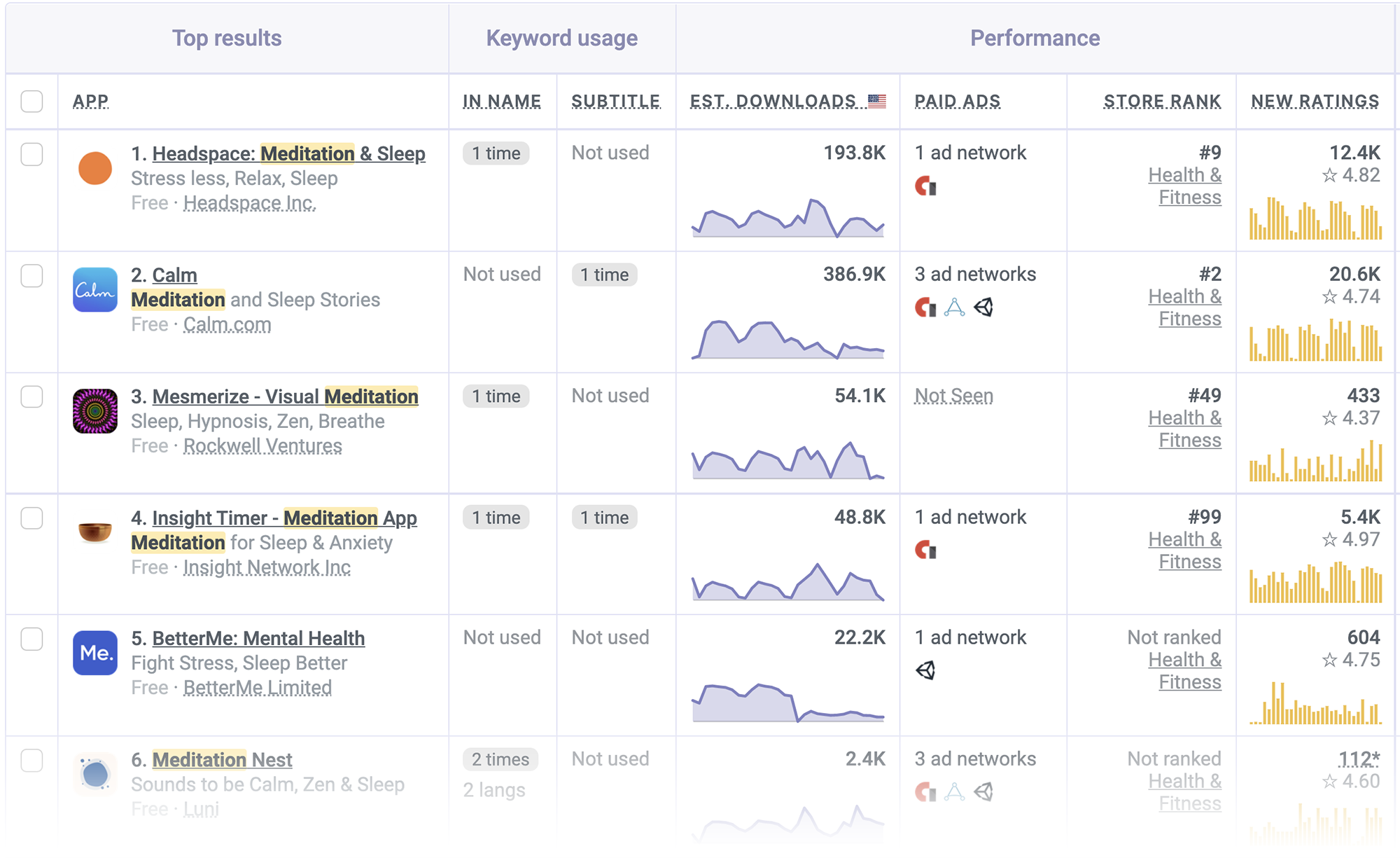 At first glance, I see something anyone who's ASOing should be aware of—the difference between the name and subtitle.

We can see it with the first two results, which also happen to be the most popular names in meditation app these days. First place Headspace has fewer downloads and ratings than rival Calm. And Clam has fewer overall words in its name and subtitle. Yet, Headspace is the #1 result. How, you ask?

This one's very easy. Headspace includes the keyword in its name. The algorithm puts the most emphasis (aka weight) on keywords in the name.

I know some companies prefer the "clean" name for branding purposes. If you're Calm, maybe enough people search for you by name, so it matters less. And by that, I mean, if giving up downloads to a rival is okay, then a "clean" name is okay.

At #3 we have Mesmerize, which is doing everything keyword-related correctly (keyword in the name, no repetition) but can't get ahead because it just doesn't get enough new ratings to show the algorithm it deserves moving up.

Insight Timer, in 4th place, has the ratings but makes the cardinal sin of repetition between the name and subtitle, effectively making the one in the name invisible to the algorithm, so all it sees is the one in the subtitle. And we talked about what that means just a couple of ranks ago.

This is a rare occurrence that we don't see often. Not for a keyword so competitive. But it all comes down to performance. BetterMe edges out its competition by having slightly more ratings. If you're any of the apps below it and want to do better for this search, follow the basics: ask for ratings, focus on the keyword, and include it in the name. You're welcome!

But really, ratings play such an important role and give the algorithm the "knowledge" it needs to sort apps that have very similar keyword weight. So, doing your keyword properly is the most important task of any ASO, but getting those ratings is right behind it in terms of priority.

FYI - Buying fake ratings can get you kicked out of the store, so don't go that route even though it's easy. Instead, get your existing users to rate the app and do that with every version, not just once.

We'll end this teardown with another keyword we've almost looked at before but didn't. 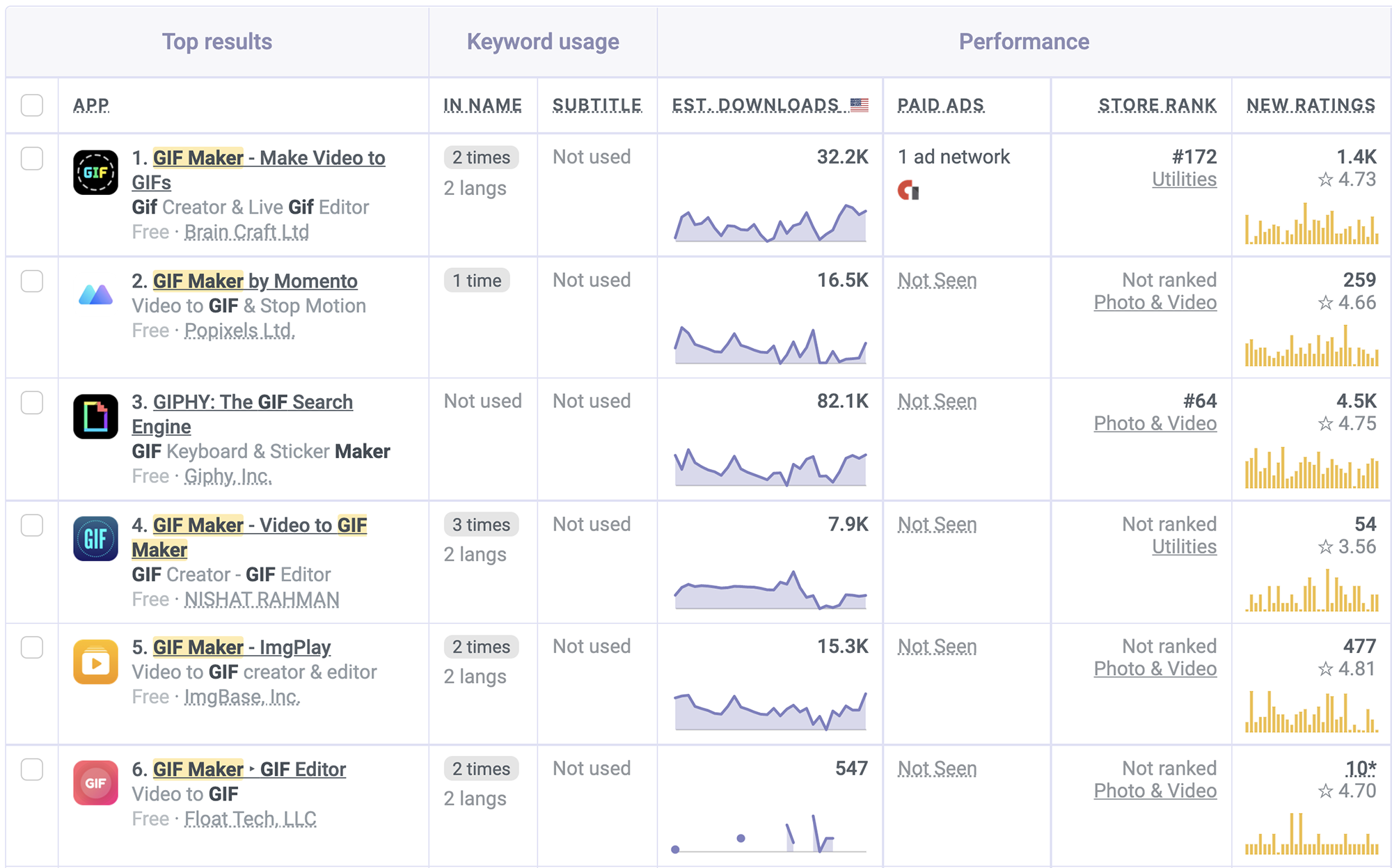 At first glance, I expect seriously competitive strategies considering how competitive its analog video editor is. All I saw, however, is a lot of (bad) copy & paste errors... Said otherwise, there's a lot of room for improvement (and learning)!

Repetition (or duplication, I use the two interchangeably) is bad. It's bad for single-word terms and even worse for multi-term ones.

Let's see it in action. First GIF Maker, the first place result, uses the full term as its name. That's great! But... it then uses the plural of one portion of it at the end of the name and then repeats it twice in the subtitle. Which instance of the word will the algo see? So they cut the weight of this term by more than half. Ouch.

Luckily for it, the second-place result, GIF Maker by Momento, is doing something very similar. Fewer words, but also fewer ratings.

That's actually an opportunity for Momento to take over. At roughly half the downloads, it could benefit greatly from that. The main thing it'd need to do is remove the word GIF from the subtitle, which will put all the focus on the name. Its second challenge is getting more ratings. It doesn't need to beat first place, but it needs a few more. I'd aim for about double what they have now. Those two together should spring it into first place.

Side note: The other nice thing about being able to get existing users to rate your app to get better ranks is that once you have a good system in place, more downloads = more ratings, and more ratings = string ranks. It's a self-feeding system if you play it all correctly.

Skipping #3 for a second, we can see the copy/pasta continuing into #4 and #5, both of which have GIF Maker as the first words of their names, and then go on to ruin all of that by repeating GIF in the subtitle.

But wait! why is #4, which has fewer ratings and downloads above #5? Just like Trivia, when you take away the duplicates, it's doing better in the focus category. A small but (very) significant difference.

Now let's tackle GIPHY, (possibly) the most popular app in the bunch. How is it sitting pretty at #3 even though it has the most downloads and ratings of all results?

Just like meditation, you can see GIPHY is including both parts of the keyword in its name and subtitle, but it's split, and the part that's at the end of the subtitle gets such little weight that even 3x ratings can't put it up above 3rd.

A very easy fix, and it'll then easily rise to #1.

Popularity - This is a measure of how many searches the keyword receives on a monthly basis but normalized to a scale of 5 - 100, where the most searches get 100, and none/barely any get a 5. Because it's normalized, the actual values sit on an exponential curve, which means a 10 isn't half of 20 but actually less.

Competitiveness - This is a measure of how strong the apps that are currently at the top 10 results are, on a scale of 1 - 100, where 1 means not at all and 100 means extremely tough. The algorithm we created looks at the same performance metrics as Apple's and Google's algorithms do. Smaller is better here, but much like the popularity score, you should only look at it in the context of keywords that are relevant to your app or game.

Results - This isn't exactly a score but rather the number of apps the algorithm will return for the keyword. Most users wouldn't look past the first five or ten, but when optimizing, we can use this number to gauge the difficulty of ranking. Less is good in this case.