Keyword Teardown #9 - A Trick for Apps with In-App Purchase

Apple's and Google's algorithms may be black boxes and completely undocumented, but patterns start to emerge if you look at enough sets of results. I actively research search results to reverse engineer how the stores decide which apps to rank and how to rank them and share what I find, including tips, tricks, and secrets, here for you to learn from.

Fitness and dieting are pretty big on the App Store. At the core of many diets is calorie counting, which is really best done by app, so it's no surprise that the keyword has fairly high popularity and competitiveness scores. 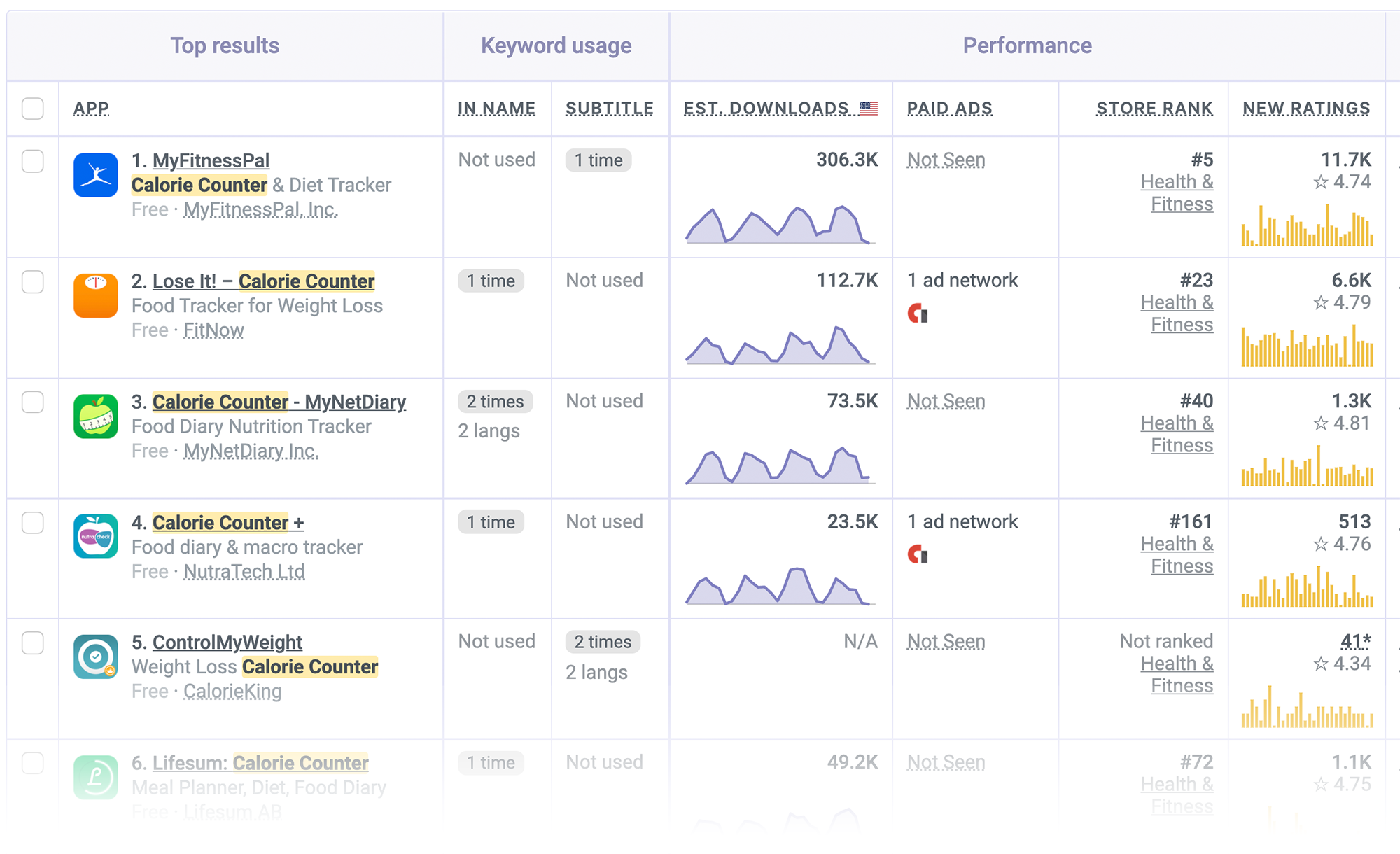 If you recall from previous teardowns, the more popular a keyword is, the more likely we are to see the top results using similar keyword layouts, forcing the algorithm to decide based on ratings. That's half true here.

MyFitnessPal is the top result for this search mainly because of its high rate of new ratings. Oh, and that it has the keyword fully in the subtitle. Normally a subtitle alone wouldn't be enough to rank well for a popular keyword like this one, but the lack of competition (as measured by ratings) leaves the algorithm no choice. Not having any keywords in the name also helps in this case because it puts all the focus on the subtitle.

Ideal? Not really. But it works in this case.

Lose It! (which I analyzed in season 1 of App Teardowns - check it out) does a great job with its keywords, but at roughly half the ratings, it's hard for the algorithm to push it up. I looked at the trend, and it seems to be going up over the last few months. If that trend continues, I expect to see it overtaking 1st place here because it's using its keyword better.

Copy and paste what I just said about Lose It! for #3 MyNetDiary. But, divide the ratings by three. And repeat that for Calorie Counter + at #4, but again slash those ratings.

Until you're left with #5, ControlMyWeight, which follows MyFitnessPal's template but with a very small handful of ratings.

Getting more ratings isn't easy but is well worth the effort.

Want to see what can only be described as a mess? Look no further than the search results for the keyword VPN. 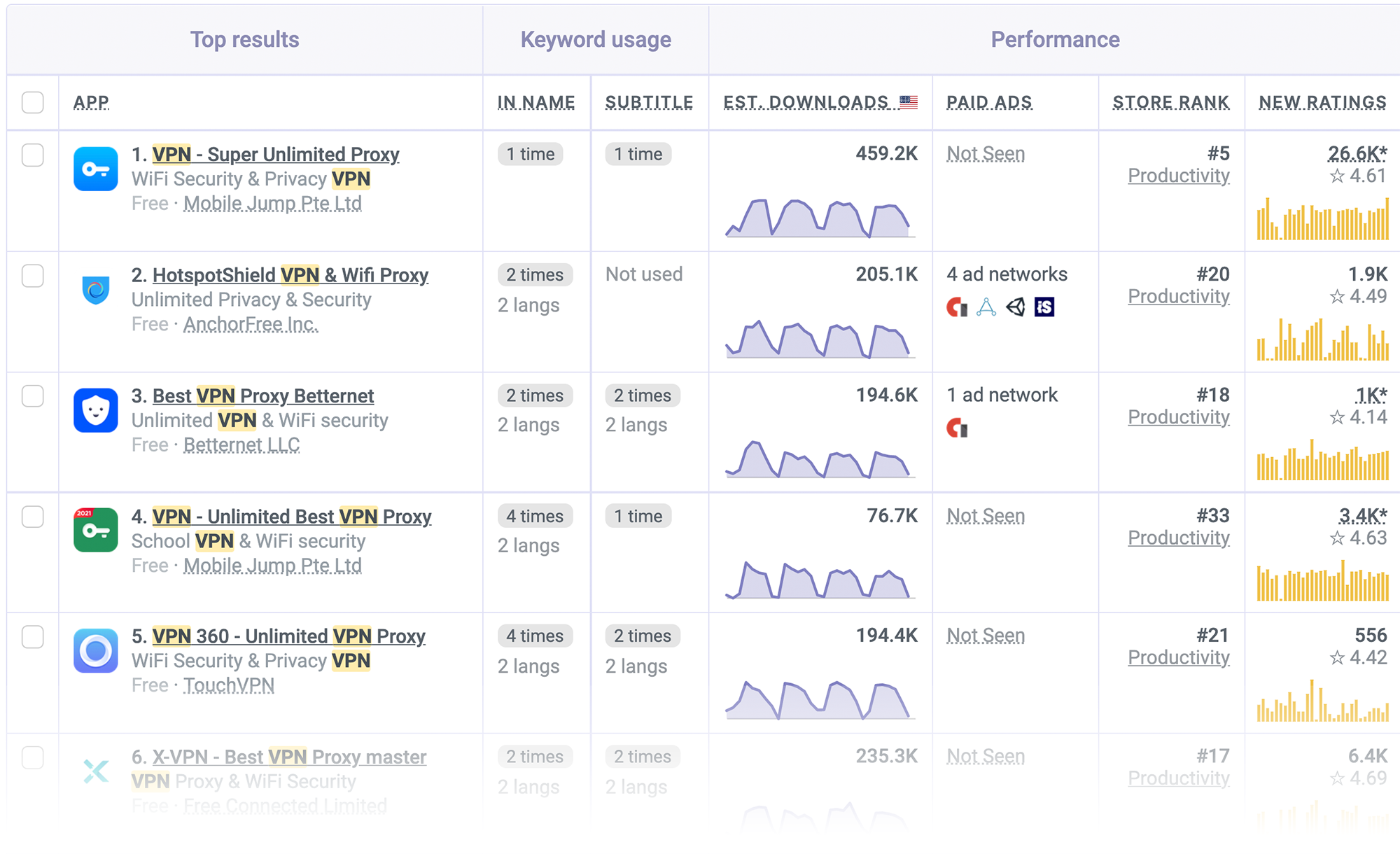 It's been a few teardowns since we've seen so much duplication, which I can only imagine is the result of copying from each other. But inside this unnecessary mess, there's a valuable lesson for apps that have subscriptions in them, so let's dig in.

The first result has the most ratings and downloads and has the keyword as the first word in its name. Unfortunately, it shoots itself in the foot by repeating it in the subtitle, but everyone else does it, so it almost cancels itself out.

In second and third places, we have two results that have fewer new ratings than the #4 spot. They all use the keyword pretty much the same way, so why are they above #4? Because they've both selected a featured in-app purchase!

We've seen this before, and here it is again. Apps that feature an in-app purchase, and so far I've mostly seen this with a subscription, seem to get a little bit of boost from the algorithm.

it seems to only happen between spots 2-4, and requires performance that's somewhat reasonable. But that one seems to be very flexible. Needless to say, if you offer in-app purchases in any form, including subscriptions, go into App Store Connect to feature them. It's an easy win.

In 5th we have VPN 360 which just doesn't have the ratings to get in. Interestingly enough, it gets more than double the downloads of #4 but a 7th of the ratings, which means there's much room to improve by getting active users to rate the app. With that, it can easily climb up, and if it featured its in-app purchases, it can climb even higher.

I'm not entirely sure why, but dieting and weight loss makes me think of discipline, and discipline makes me think of organization, and to be organized you need a... to do list. It's a pretty generic term for a very common app, and with a popularity of 56 there's a good amount of demand for it.

Let's have a look at the results. 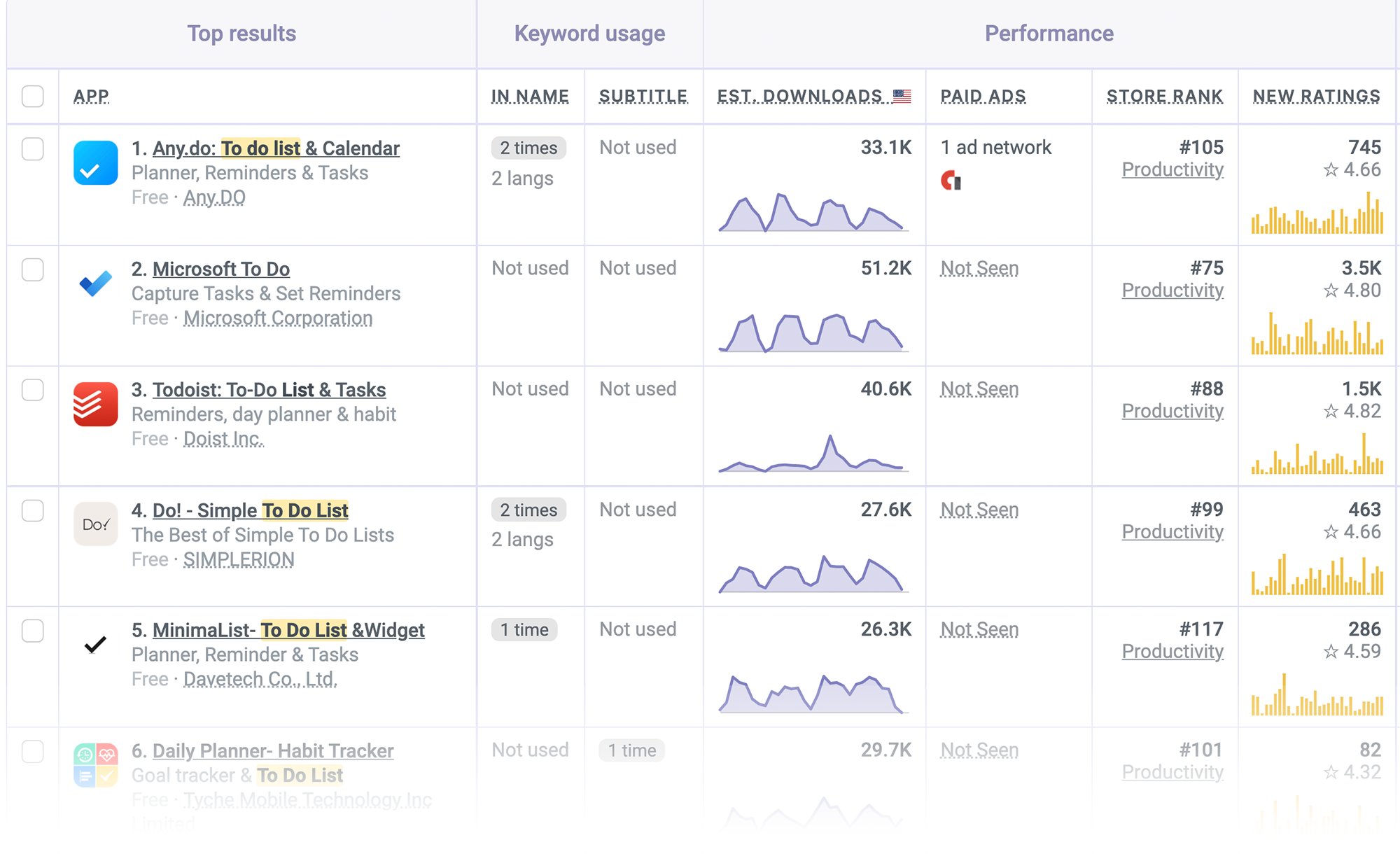 Starting at the top, Any.do does not have the most new ratings or new downloads, but it uses the term as-is and in the middle of a fairly short name. To the algorithm, that means it's all about to do lists. Now, if there was another app with the same keyword layout and better performance, it'd easily win, but there isn't.

Your rank is determined by Apple, but also by what your competitors do and don't do. That's why it's important to keep an eye on them.

Microsft holds on to the #2 position even though it has more new ratings and downloads. Why? Because it pushed a half of the keyword into its keyword list. Mistake? Accident? Negligence? Well, remember what I said before about what your competitors don't do? This is exactly what I mean.

If Microsoft adds the word "list" to the app's name, they will easily rank first. And if you're thinking "wait, maybe they're focused on the keyword 'to do' without the list part?". They probably are because they rank 1st for it. But... that keyword has a lower popularity score. So again, mistake? Accident? Negligence?

Moving on to #3, Todoist (which I analyzed in season 2 of App Teardowns - check it out of recently), has more ratings and downloads than #1, and seems to be using almost identical keyword strategy (who borrowed from who?). So why is it not first?

See that hyphen? Apple counts it as a character. The reason I say this is because searching for "to-do list" and "to do list" yield very different results, and Todoist ranks higher in the former.

While grammar is important, in keyword-land, you'll find that people tend to forget grammar when it requires extra taps. Which means Todoist is really leaving money on the table here, much like Microsoft.

Do! and MinimaList (ha ha!) take fourth and fifth places by having fairly similar keyword layouts, but the latter only having about half the new ratings. Focus could help MinimaList climb up.

And while I didn't want to spend too much about these two because this is already getting long, I can't not point out that "&widgets" at the end is a total waste of characters both for Apple and for human readers. The upside is that dropping it will help with focus. I see a clean win here.

We've seen a few consistent trends in this teardown, but also a few new ones you should definitely be working into your strategy:

Get My App Store Optimization Tools