ASO Teardown: Lessons Learned from Digging into the ASO Strategy of 12 Popular Apps

Welcome to ASO Teardowns, a series where we dissect the strategies apps use to gain visibility on the App Store and Google Play for you to learn from. This is a special edition.

Over the last 12 weeks, we've analyzed 12 apps. Some popular, some indie, all leveraging App Store Optimization to gain visibility on the App Store. That's quite a few, enough for an entire season, so we decided to collect all 12 into "Season One" of ASO Teardowns, and in this teardown, we'll highlight the most common takeaways.

Check out all ASO Teardowns.

Every teardown starts with stats, for context, and this one's no different. Except, this time, the stats are about the teardowns:

Pretty busy, and these stats don't even include premium teardowns.

Keyword strategies are a work of art and are pretty app-specific, but there are some patterns. Some good, some less so. Here are the ones that repeat the most in these 12 teardowns + how to use these patterns correctly to get more visibility.

Everything is Better When Keywords Work Together

The algorithm looks at the name and the subtitle for keywords to rank the app in. But the name and subtitle fields are limited to 30 characters each. This means that to get more visibility, every character counts.

The best way to utilize your 60 characters is to use keywords that play well together and form search phrases.

The more, the merrier. Ultimate Guitar managed to craft a name and subtitle combination that gives the algorithm a lot:

Apple's search algorithm ignores keywords that appear in both the name and subtitle, counting only the first appearance. For that reason, including a keyword twice provides no benefit and takes away from those precious characters, limiting the number of search phrases an app can target.

News Break repeats the word "local," giving up five whole characters and a variety of missed keyword combinations. That's why the number of keywords they target with their name/subtitle combination is very small:

Google Maps, however, does precisely the opposite: 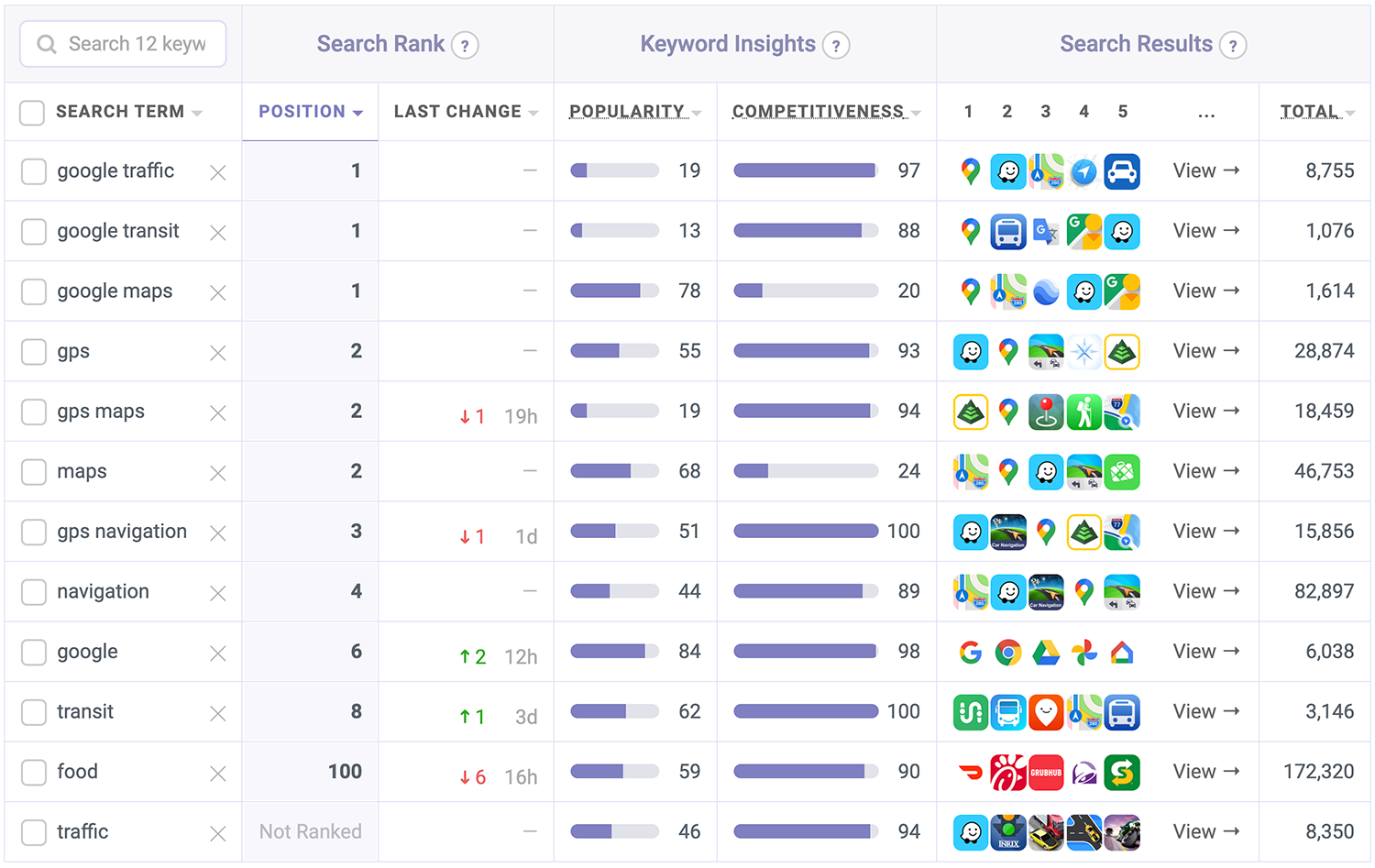 There's no repetition here at all. In fact, the name and subtitle combination Google put together for Maps is truly amazing, on the verge of stuffing (not a good thing). Your best bet is to be somewhere in-between.

Instinct pushes many developers and marketers to stuff their keyword list, which is very limited, with the names of their competitors. Why? 🤷🏻‍♂️ If you think about this, ranking #1 for a competitor's name isn't likely, and if someone is looking for a specific competitor by name, it's not very likely they'll be interested in your app.

Following this logic, you should use the keyword list for relevant keywords.

Fotmob doesn't do this, and instead uses their keyword list for relevant keywords. This gives them more keywords to rank in and also the ability to focus. That's why they rank very well for many of the keywords they target. 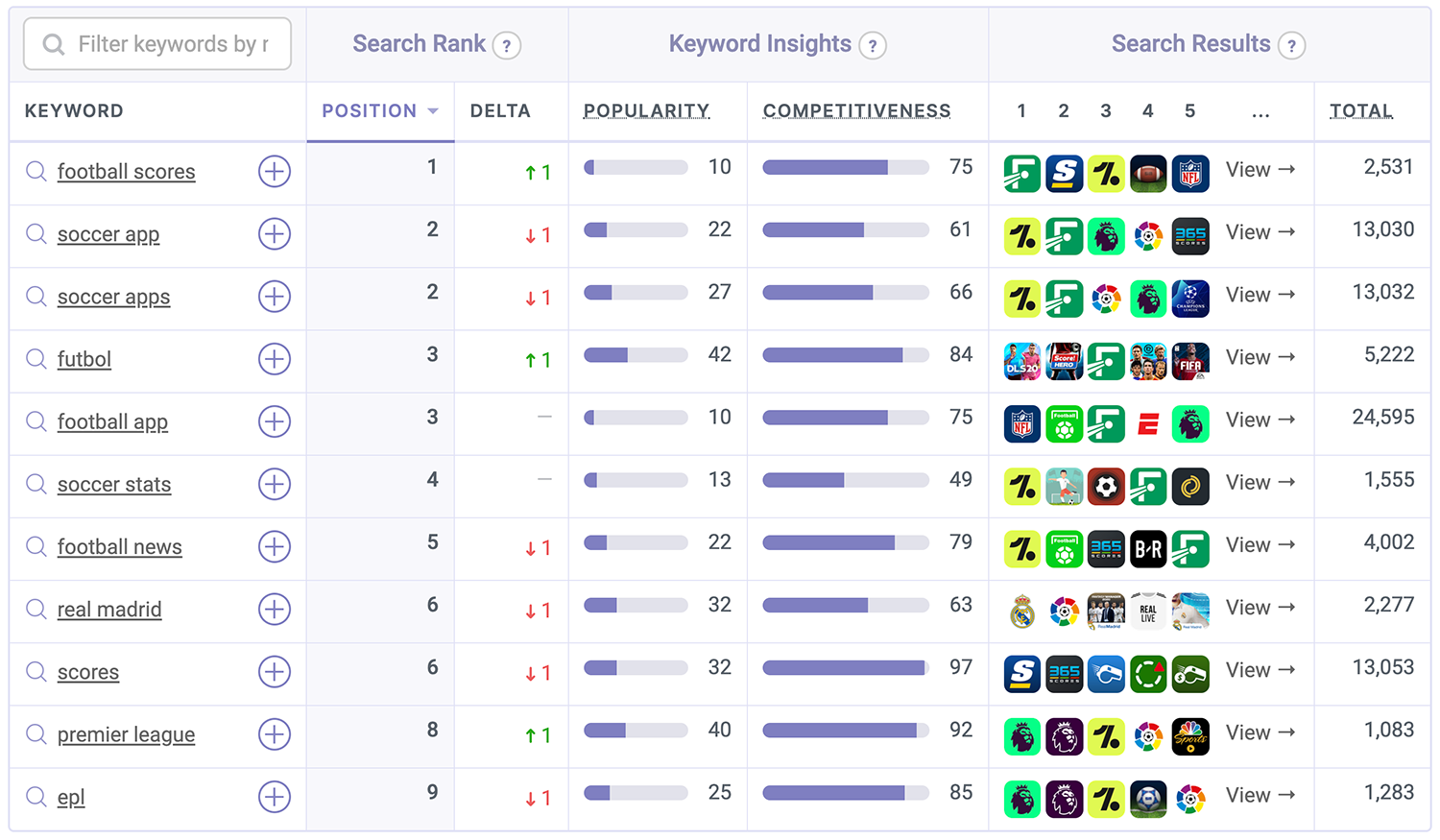 Screenshots are such an important tool in the ASO toolbox. Some of the apps we looked at do such a fantastic job, and the results are pretty direct—downloads. Some leave a lot to be desired. Here are the highlights:

The first takeaway you'll see in every teardown so far is that contrast makes screenshots easier to read, and when people actually take the time to process screenshots, the chances of them converting to a download is much higher.

Here's a great example of what good contrast looks like. These are Fotmob's screenshots: 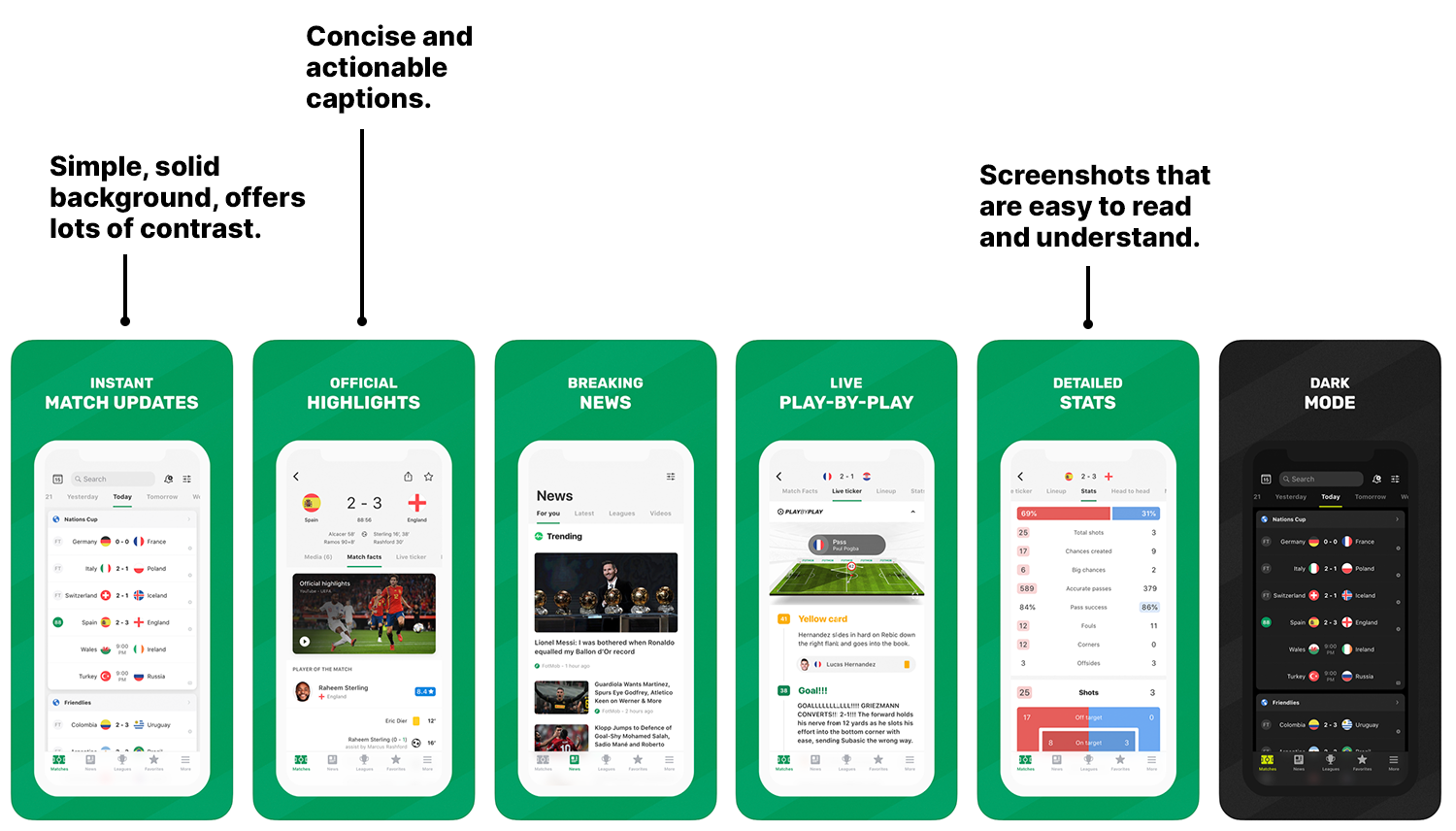 It's simple, white on green, yet so effective.

Without contrast, people who arrive at your app's page won't take the time necessary to actually process the screenshot, and you'll lose your greatest asset.

News Break's screenshots have the least contrast of all the teardowns: 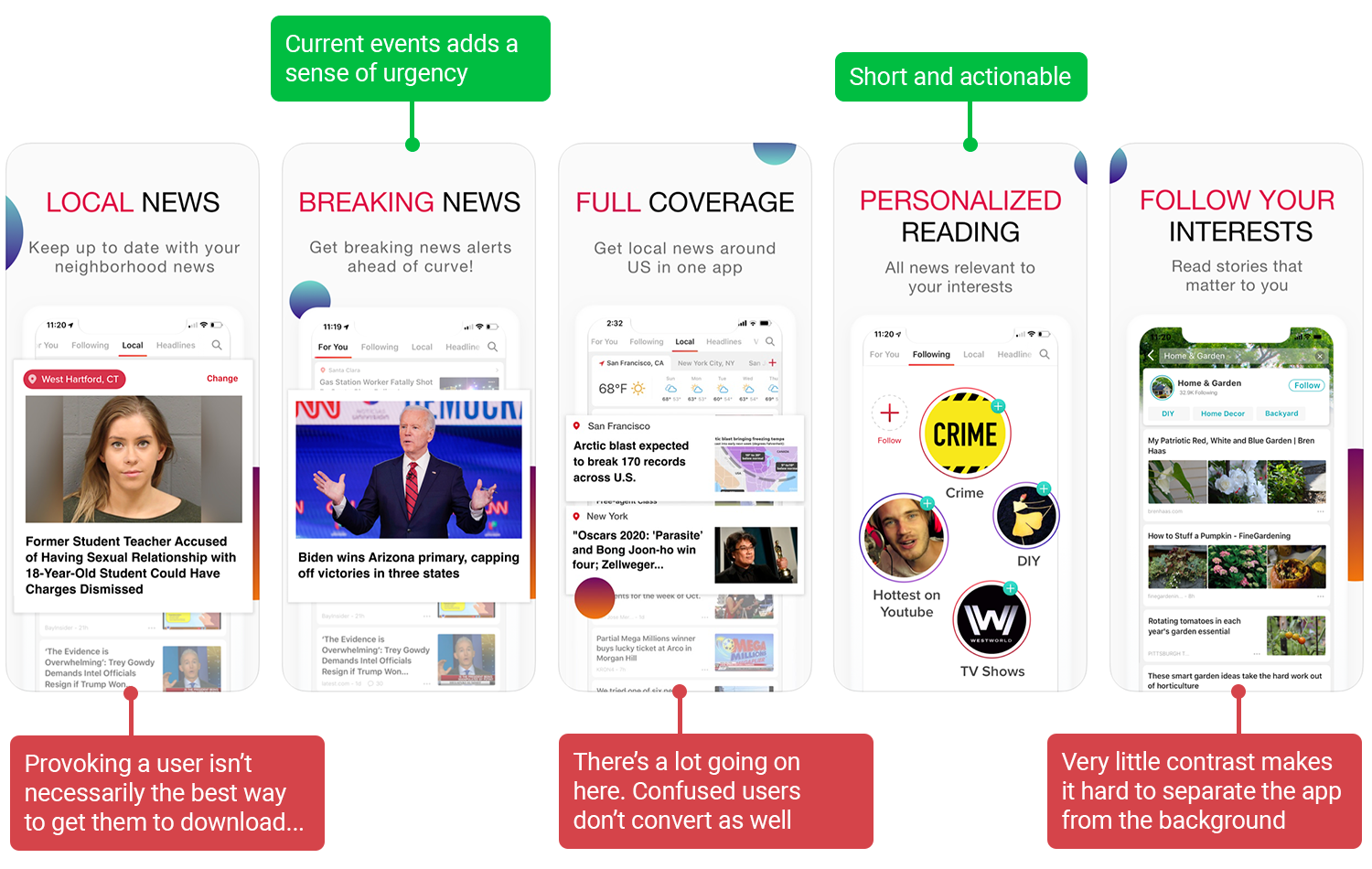 Can you read these? Barely. Do you want to? Probably not.

Apple gives you up to 10 opportunities (aka. screenshots) to show users the unique benefits of your app. Most apps stop at six, throwing away 4 possibilities to engage people who land on your app's page. Given how much space screenshots take and that the eye is usually attracted to them immediately, not using all screenshots is just a waste.

Even if you can't think of 10 benefits or unique features, you can get creative, like Spotify: 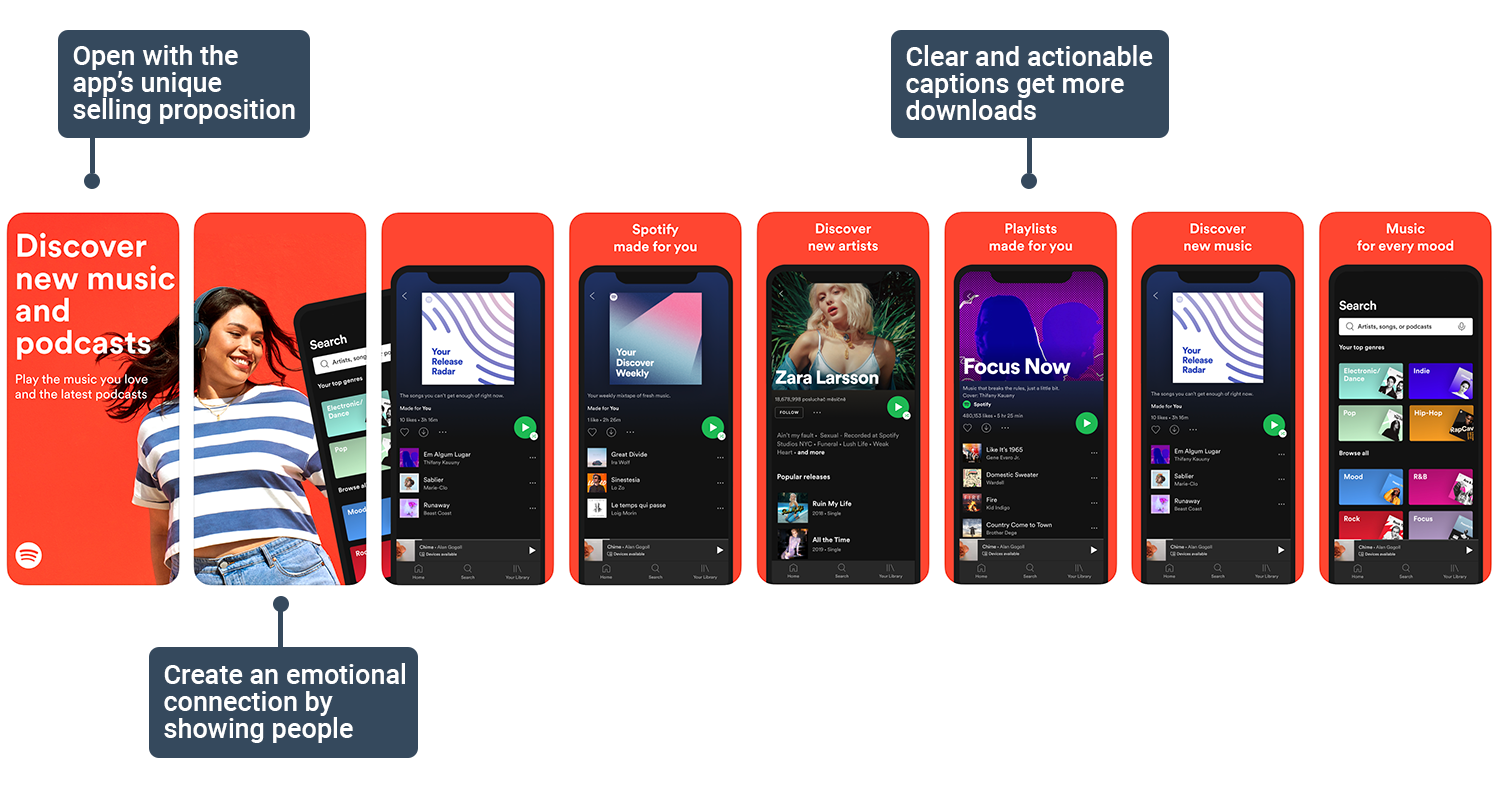 That's a pretty nice way to use the space. Shop doesn't: 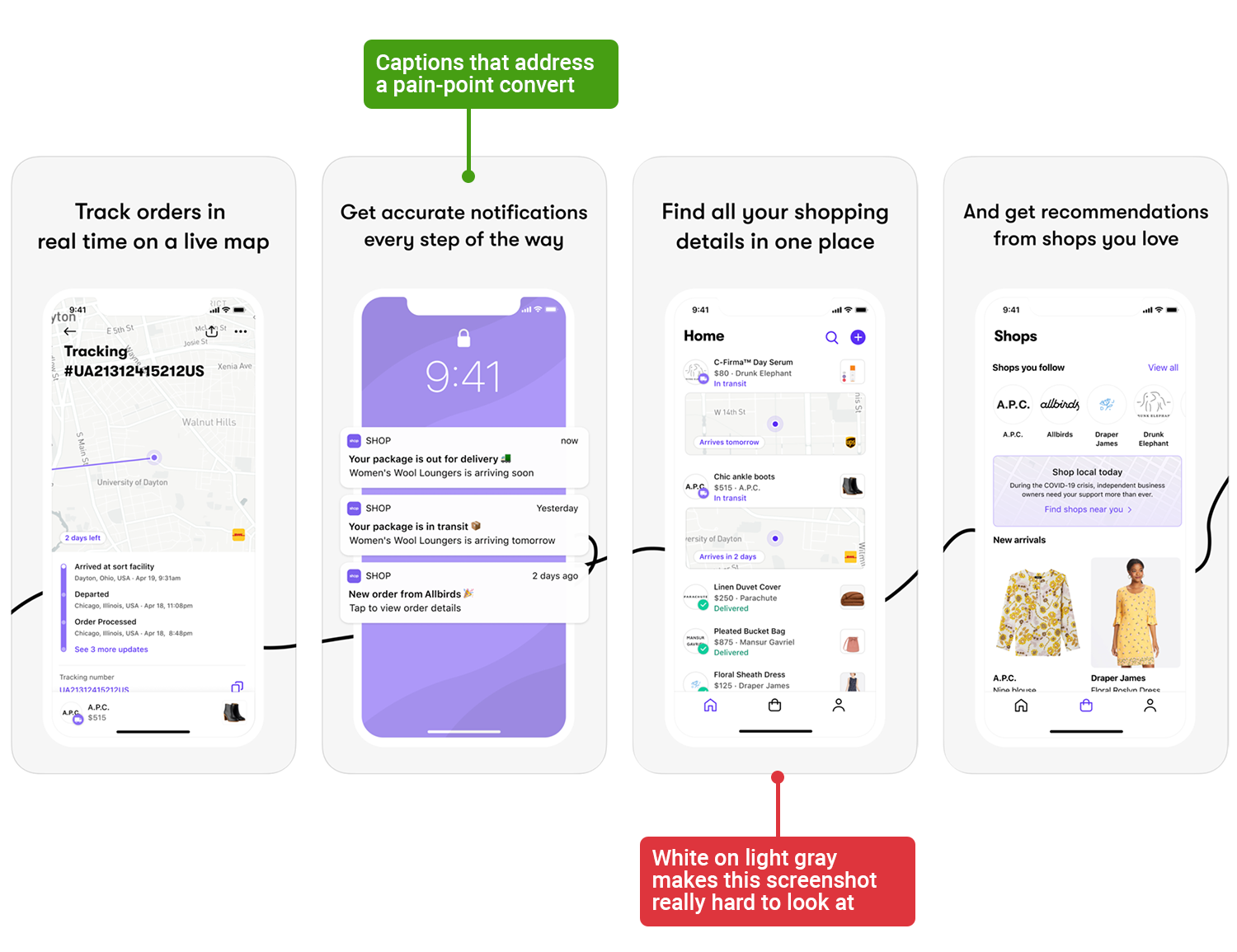 I want to see more. I want to be sold on the app. Four simple screenshots just aren't enough.

Use Screenshots to Sell Value

You've got them looking, and there's enough to look at, there's just one more thing you need. To sell! Showing your app's UI is great, but you can't let people guess what they're looking at. Captions bring out the value, so they don't have to guess. They also give you a chance to "show off" what's unique about your app.

So are Lose It's: 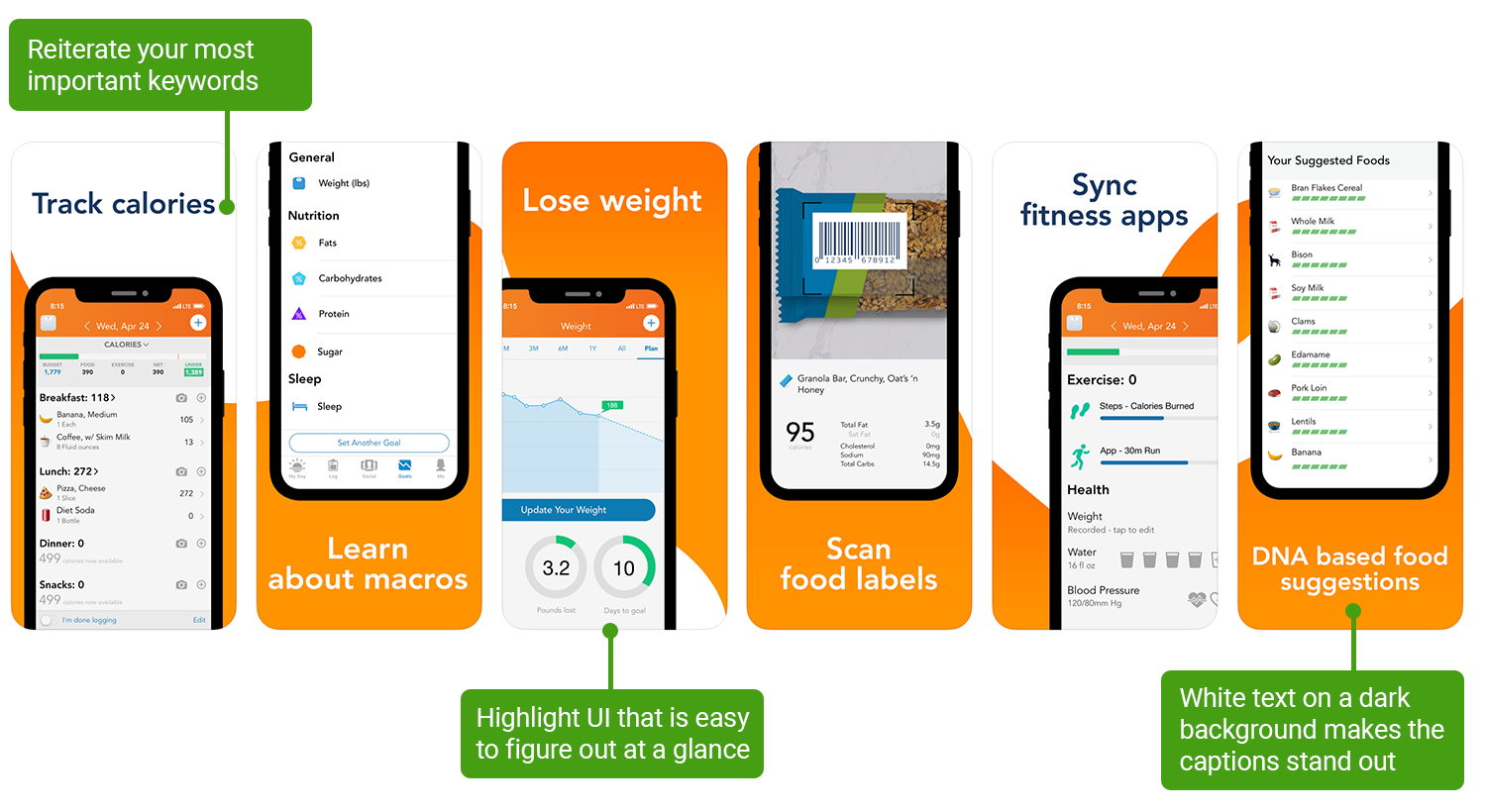 App Store Optimization is part science and part art. The science part is natural; using ASO tools, you can get information that will help you drive your decision making.

One easy example is using keyword popularity to determine which keywords to target. The art part is where you get to be creative, experiment with different ideas, and get to know the algorithm.

Both are necessary, and an excellent shortcut to learning how to do them is to see how others do it. That's why we share these teardowns publicly.

We're going to wrap these 12 teardowns into season 1. In season 2 we'll be doing more of these, look at ASO for Google Play, and analyze ASO of games.