Uber does a great job with their ASO, offering much to learn from. Today we're going to look at Uber Eats, the company's food delivery app. Coming up with a good keyword strategy for an app as popular as Uber Eats may seem trivial, but it's quite the opposite.

As we initially expected, Uber's strategy here is almost spot on and is likely heavily tested. But some things can be improved.

Overall, Uber Eats gets an A-

FYI - We reverse-engineered the strategy by examining the app's page on the App Store. We weren't involved in putting it together.

Uber Eats by the Numbers

Before we start examining, here's Uber Eats' performance on the App Store in the US:

Uber Eats vs. the Competition

While there are quite a few food delivery services, only a few cater to enough markets to be popular in the App Store. In this case, the main competition to uber Eats comes from DoorDash, Grubhub, and Postmates. Download-wise, DoorDash is the leader with more than twice as many downloads as Uber Eats. Grubhub is almost the same as Uber Eats, and Postmates has about half the downloads.

However, that doesn't mean their keyword ranks follow exactly: 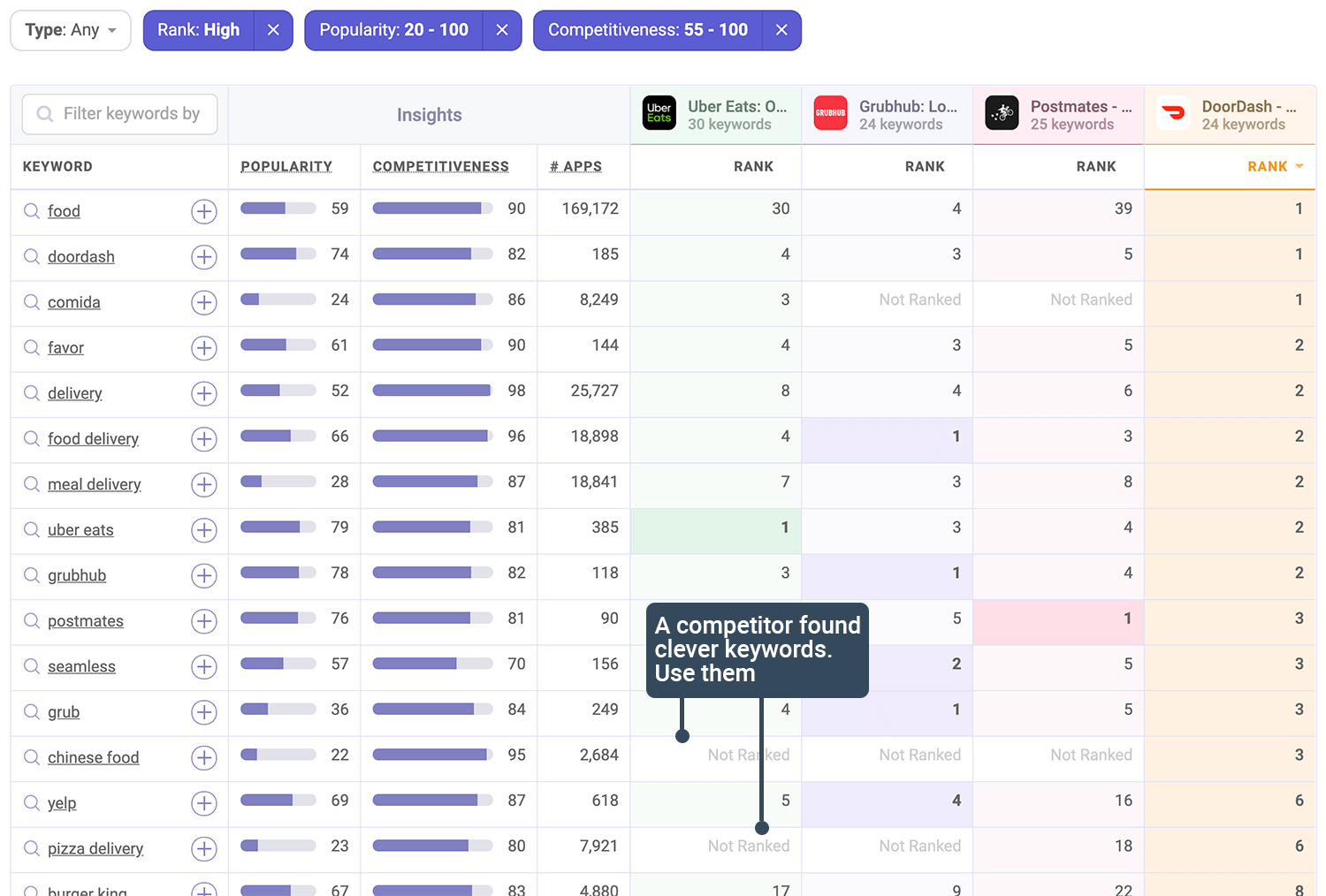 Putting them all side by side, we can see Uber Eats is the late entrant. It's doing fairly well to keep up but doesn't have the top rank for any of the primary keywords they're all fighting over.

The leader in this group is DoorDash, which isn't just the one with the most downloads but also creativity. Uber could learn from it and incorporate terms like "chinese food" (popularity = 22) or "pizza delivery" (popularity = 23).

Based on these, it looks like Uber Eats' keyword strategy is targeting the following keywords:

Uber eats is doing all right. The competition is pretty tough, the app's name is a bit less focused than the competition, and the subtitle doesn't contribute towards the most important search term.

Note: The subtitle likely mentions "door" so it can combine with a keyword in the keyword list to spell a competitor's name (DoorDash). It's a clever technique we see more apps starting to use. 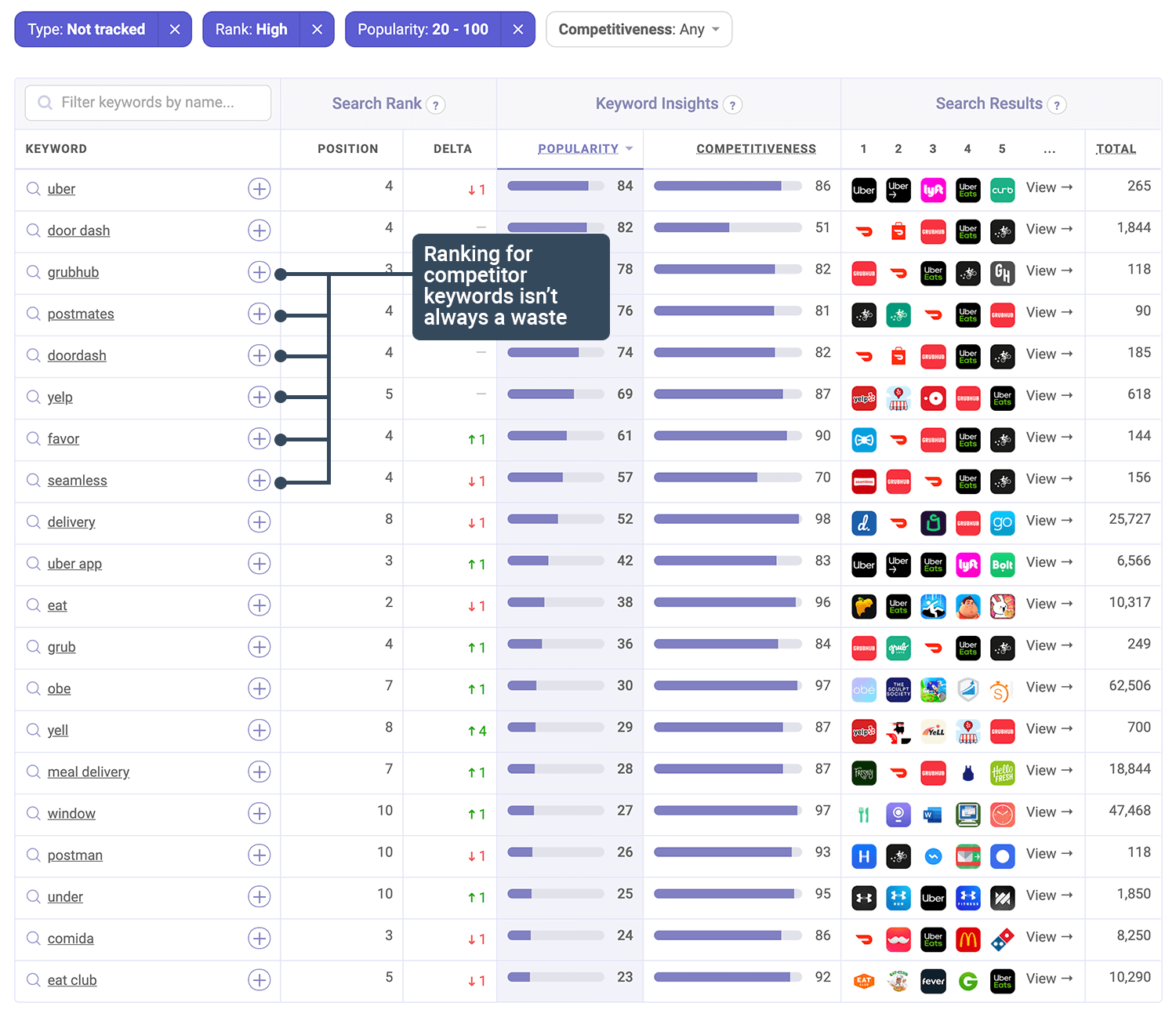 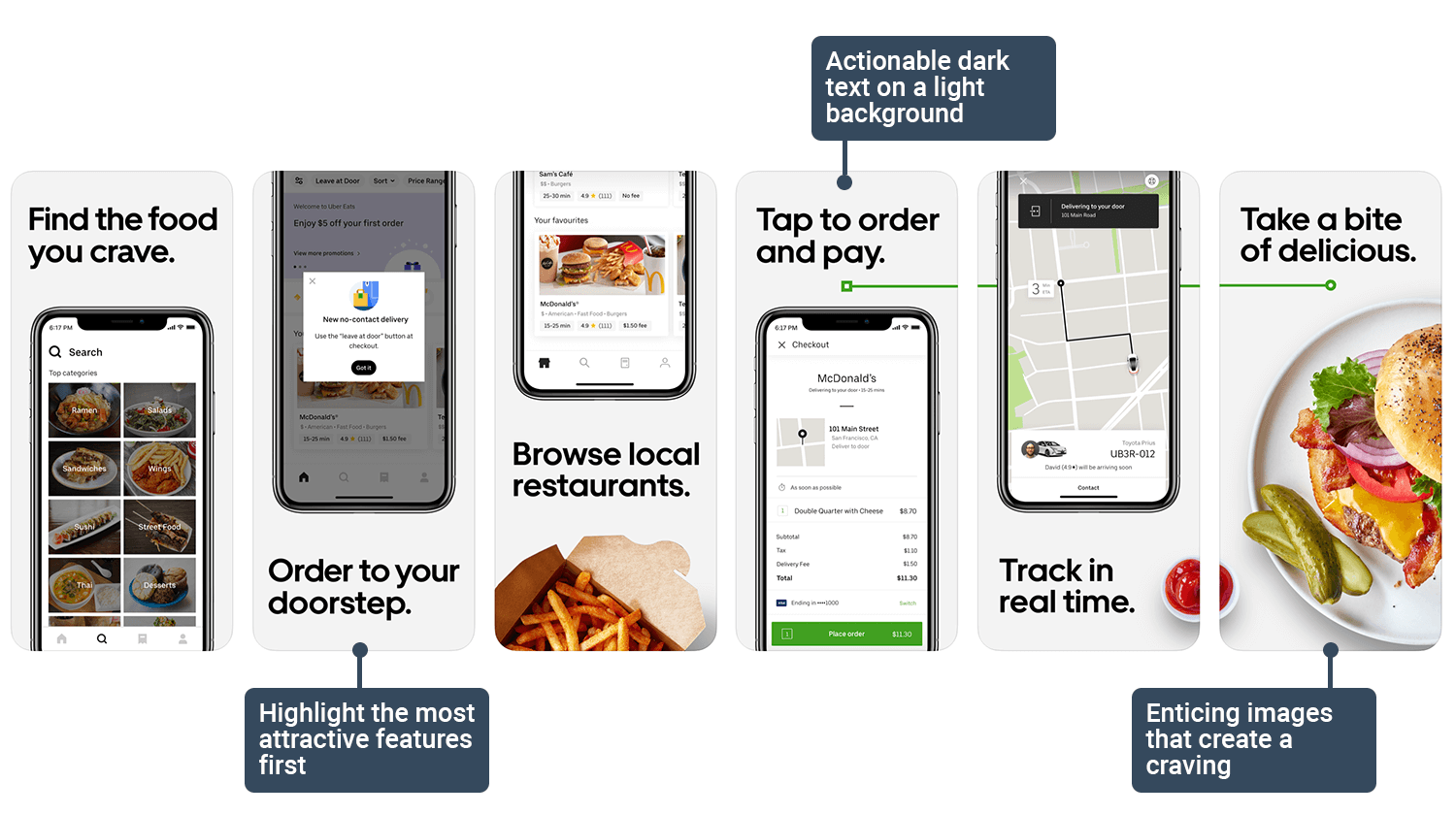 How do you "sell" a food delivery app? Uber's way is by selling its convenience. That seems to be the focus of the screenshots here. And at that, they do a great job by highlighting contactless delivery, easy payment, and order tracking.

But there's another way. Food creates a craving. It looks like they try to leverage that with the first screenshot, but the food is covered, the text is relatively small, and there are too many options.

Uber Eats doesn't use an App preview. This isn't common among apps that provide a service. While videos are a great way to convey how easy an app is to use, which seems to be the focus of the screenshots, Uber Eats' young crowd may not need a video to show them that.

However, a video remind users that they're hungry, and that Uber Eats is the solution, so it's worth experimenting with.

Although Uber is an extremely popular brand, on the App Store, it has to invest in ASO to be seen. Its direct competitors do that too, which means Uber has to continue iterating over its strategy to remain competitive.