App stores tend to feel like black boxes. You have full control over how your app behaves and how it looks, but once it's live, getting people to download it is a whole new ball game.

Success on the App Store and Google Play requires more than reading guides. It requires trial-and-error. Trying something, be it a different price, a new ad campaign, or a different ad network, putting it in production, and then measuring its results.

That's a great way if... you have the time and don't mind taking a few hits along the way. Operating in that way is a lot like flying blind.

There's a Better (and Faster) Way

The good news is, you don't have to fly blind when it comes to growing your app.

Most apps don't exist in a vacuum, which means there are other apps out there trying to grow just like you, and you can learn from them. You can skip some of that trial-and-error by looking at the actions and performance of those apps.

What Is Competitor Intelligence for Mobile Apps?

Competitor Intelligence lets you look "behind the curtain" of any app, so you can see and estimate of how many downloads it's getting, an estimate for how much money it's making, which technologies it's using, what its audience is like, and more, to make more informed decisions with your apps.

Traditionally, you'd go to an expensive consultant to help with that, but with the right tools and data, you can now do that all on your own.

Apple and Google don't make any of this data available, which is why we spent years building it out. With Appfigures, you can get the visibility you need to succeed. Continue reading to find out how.

Visibility Is Important in Every Step of the Way

When you can see what your competitors are up to, you can make better decisions.

Early on, at the idea stage, knowing how similar apps make money and how much will ensure you don't make costly mistakes that will make it harder to monetize. After your app is live, Competitor Intelligence will ensure you're not outpaced by the competition, that you're making the right moves, and skipping unnecessary mistakes.

Let's look at real-world situations where flying blind is almost a certain mistake:

You have an idea, and it sounds great. Who wouldn't want it, right? But... do they really?

A good example is widgets, which became an overnight hit with the release of iOS 14. Should you jump in? What kind of downloads can you expect if the app makes it? Is there enough money in it?

To answer these questions, we can head into the Competitors report's performance section and select the top widget-first app. Here's what that looks like:

A million downloads and more than $400K in 10 days in the US. Yup, this is a good category to jump into. This may not be the case in a month, so this isn't a guarantee. Keep that in mind and make sure to keep tabs on these apps even after you made your decision.

2. Which tools and utilities should I use to develop and monetize my app?

There are many different SDKs and APIs out there for developers to use to build their apps with, streamline their marketing, make money with ads, and many others. But which one should you go with? If you choose the wrong one, you'll be wasting precious development time and may end up with a solution that makes it harder to compete.

To make the best choice when it comes to tools, you can look at which ones competitors and similar apps have installed. Here's what it looks like: 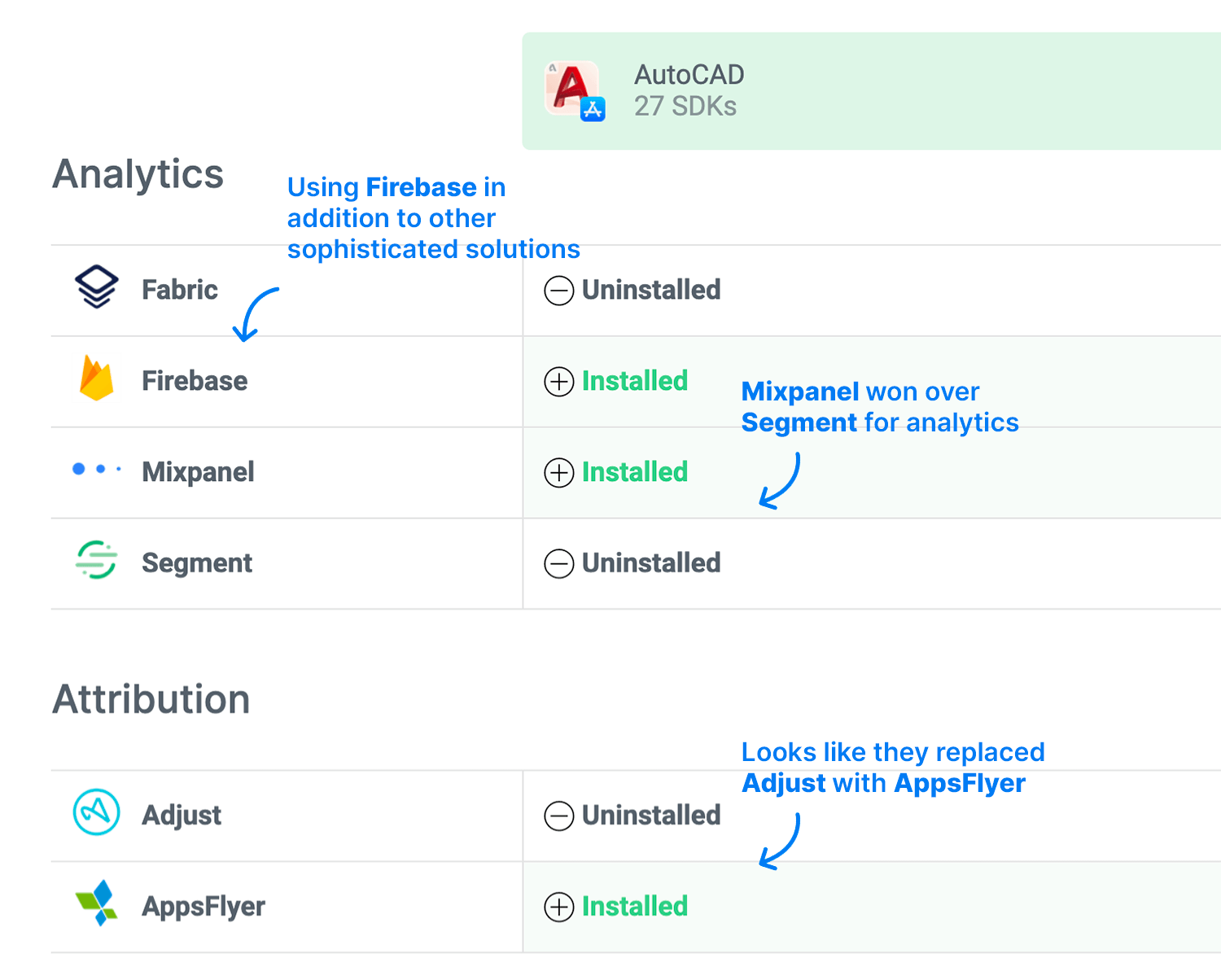 Looking at the SDKs section of the Competitors report, you can easily see what's powering apps under the hood, from analytics and attribution to development and monetization.

3. How is my app performing in comparison to competitors today?

When your app is out there in the store, it's imperative to know how its downloads compare against the competition. There are a few reasons why this is critical.

The Competitors report gives you a day-by-day view of downloads, revenue, ratings, and ranks so you can easily benchmark your app and the competition: 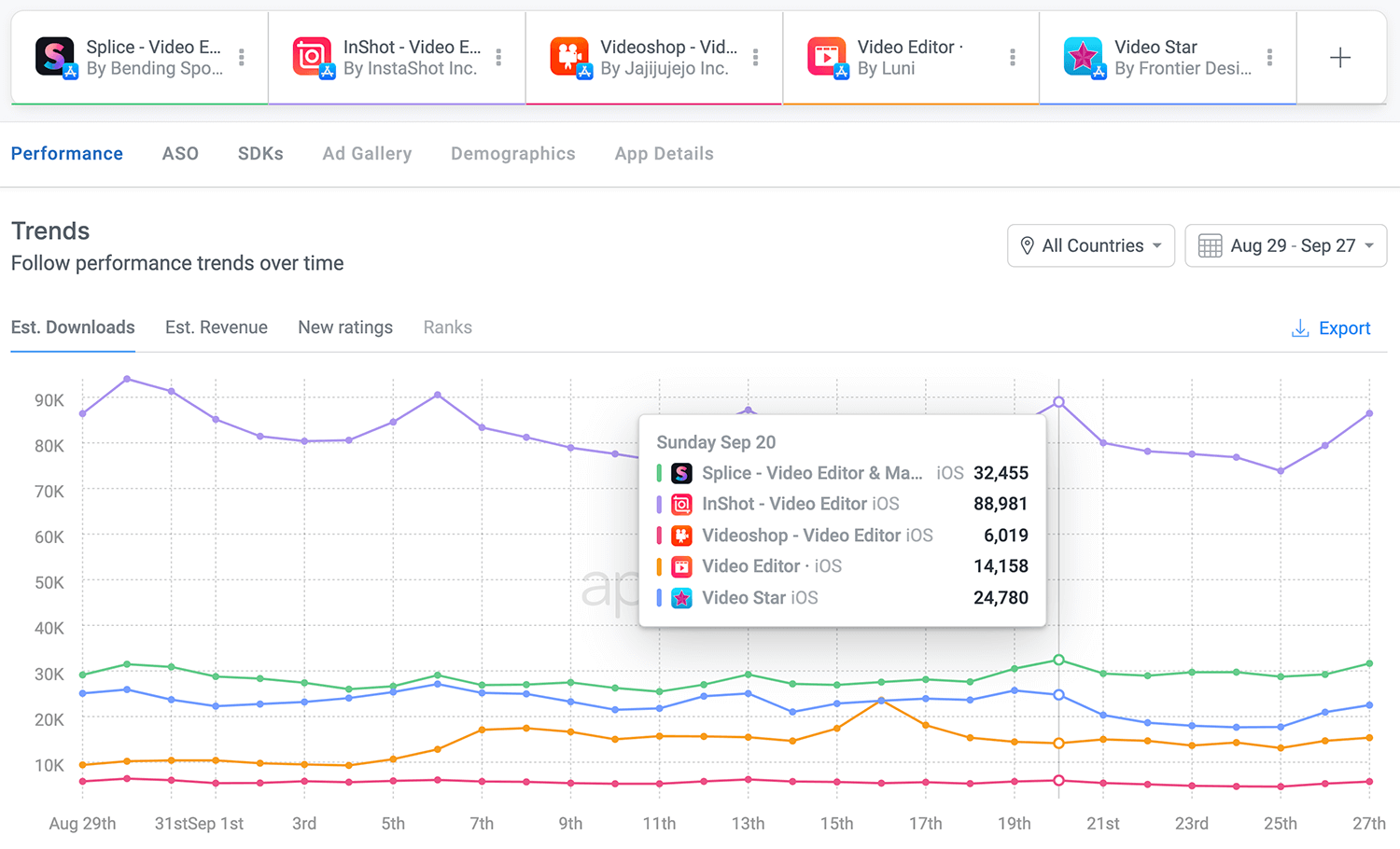 4. How efficient are similar apps in turning downloads into revenue?

Downloads are great, but for apps that generate revenue, it's also essential to know how they compare to the competition at actually generating revenue.

Say your app converts 4% of downloads into paying users. Is that good? Can you do better? Should you invest time trying to optimize? All good questions!

A coarse but useful way to look at that is the simple downloads to revenue KPI, which is simply revenue divided by downloads. Although this is a very simple KPI that doesn't work well with subscriptions and consumable in-app purchases, it still provides a valuable proxy to get a glimpse into what a download is worth to your competitors. Which, in turn, will show you how fierce they can compete to get that downloads.

The KPI is also a good way to know that there's more that you can do to improve your conversion funnel (unless your app is the one making $6.01/download).

5. How many downloads do I need to get to the top of my category?

Games tend to "burst," which is a strategy where you spend on paid ads just enough to get to a specific top rank, expecting that being in that top rank will give the app enough visibility to continue and get more downloads without the paid ads.

Some apps can afford to throw money on ads until the app or game gets to the top, but most apps need to plan such a campaign.

To do that, they need to know how many downloads they need, which day is the best to burst on and make sure no one else is bursting so they don't run each other's ad spend tabs up.

The Competitors report gives you the app's rank as well as an estimate of downloads, which you can look at in total or by date. Doing that for the top 5-10 apps in a category on weekdays vs. weekends will give you a very good idea of the scale of downloads you'll need to get that rank in the most efficient way possible.

6. Which countries should I advertise in?

Optimizing ad spend is a critical component of any ad campaign. Unless you have infinite money, you want to spend it where it'll give you the most return.

A good way to optimize spend is to advertise in countries where the ads can make the biggest impact, and a good proxy for that is competitor downloads. 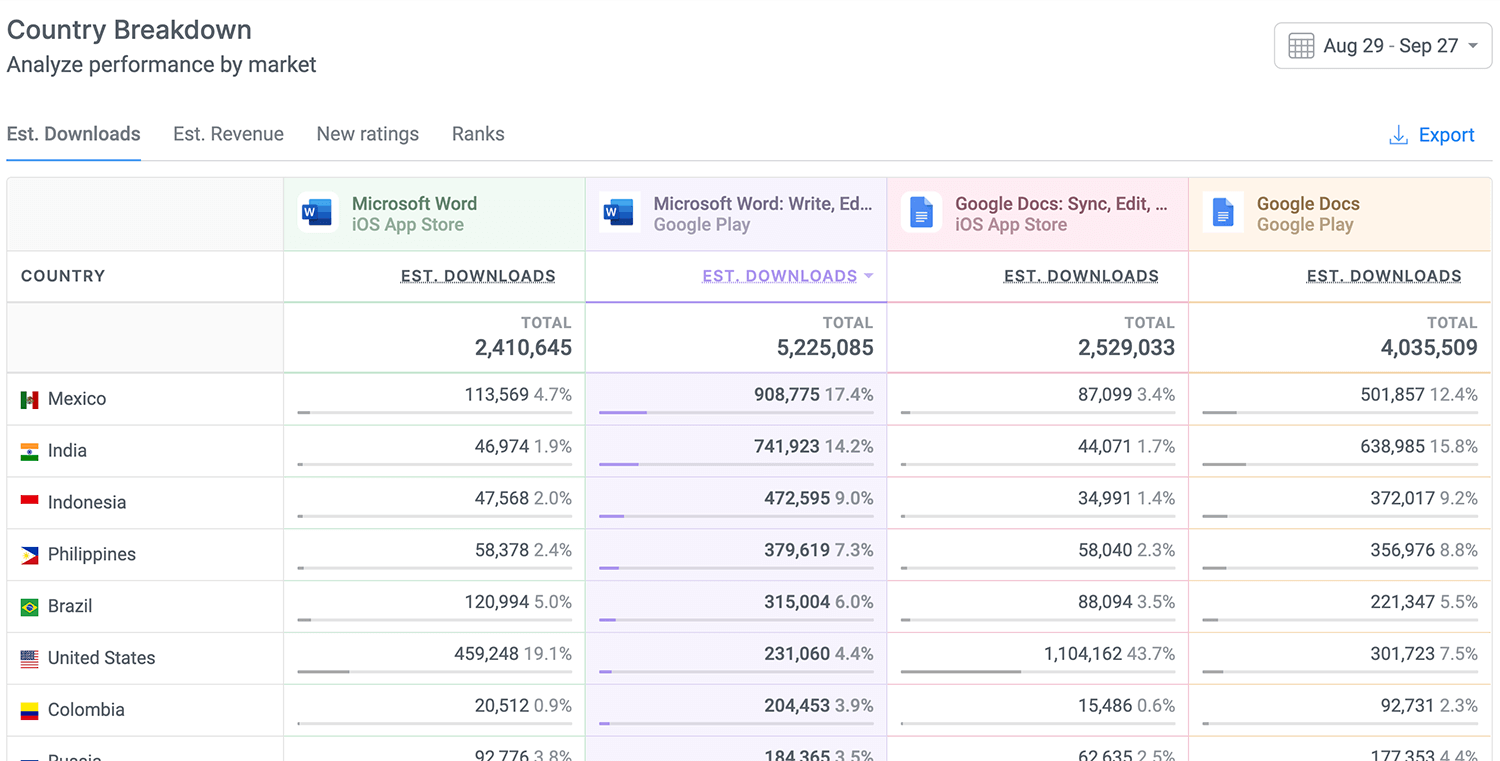 Downloads in a country mean there's demand in that country, so naturally, you'd want to go after countries where competitors are doing well and stay away from countries where they aren't.

In the Competitors report, you can see a full country breakdown of downloads by country.

7. Which audiences should I target with my paid ads?

Ad targeting goes beyond countries, and with audience demographics, you can optimize your ad spend even more. Some apps have an obvious audience, like news. If you had to guess who uses news apps the most, not during an election year, you'd probably guess older folks. So, if you're tasked with advertising a SmartNews competitor, you'd probably want to focus your spend on them.

But what if you don't know who's using your competitors' apps? Head into the Competitors report and take a look:

In this case, we're looking at the demographics of the top 5 casino apps by revenue. There's an obvious pattern here, and the one outlier is worth digging a bit into—More on that in a separate guide.

Targeting this age group and gender can take your generic ad campaign from a money burner to one that's ROI positive, and all you did was look at the top competitors.

The Importance of Accuracy

Every question in this guide can help your app soar, but that's only if the information you're looking at is accurate. Competitor Intelligence is based on estimates, which is why we've taken a firm stance on accuracy. In fact, we have such a high bar that if we can't provide an estimate that meets it, we won't show it.

We're actively working on fine-tuning our estimation models to provide accurate estimates for every single app in every single country, which is why you'll see more data becoming available for some apps over time.

What You Need to Compete Is at Your Fingertips!

There you have it, seven ways to outsmart your competition and get more downloads. Easy right?

This is just a selection of critical questions app makers need to answer to grow their downloads, but there are many more.

Whether you've got an idea to validate or an app in the store, using Competitor Intelligence will save you time, help you make more informed decisions, and grow faster by outsmarting the competition. And it's not at all complicated. All of the screenshots in this guide took no more than selecting competitors. That's it.

Convert more views into downloads by optimizing your screenshots. Here's everything you need to know.

A/B testing is the easiest and best (and safest) way to grow your downloads. Here's how to actually do it!