Subscriptions are a great way to grow a consistent revenue stream, and as long as you get more subscribers you'll make more money. When analyzing your subscription business, you're most likely keeping a close watch on active subscriptions.

Your active subscriptions go up when new users subscribe and down when they cancel their subscriptions. In this guide, we're going to take a closer look at the second group and see that reducing the number of subscribers who leave is as crucial as getting new subscribers.

In the world of subscriptions, the metric for how many subscribers leave is called churn, and it's a standard KPI used to measure how fast your business is "leaking" subscribers.

This means that every month 10% of your paying users are leaving, and the 250 new subscriptions aren't even considered which means your promotion, app store optimization, and ads won't help much. That's why it's crucial you actively work on reducing your churn rate.

Monitoring your churn rate is a must for developers who rely on subscription. While Apple and Google don't calculate churn rate for you, Appfigures does it automatically for each of your subscription tiers over time and by country. Sign up for free →

In an ideal world paying customers would never leave. In the real world, however, no matter how great your app is, some customers will leave.

While different types will see different churn rates, most developers should aim for a churn rate that's in the low single digits.

Why Churn is Your Enemy

Churn is a threat to subscription apps because it eats at the bottom line quietly and unless you're paying attention can eliminate it while you're busy promoting the app.

Going back to our app with 1,000 subscriptions, if we don't actively reduce the 10% churn it's experiencing, we'll need to get 100 new subscriptions every month just to keep the same revenue. If we reduce our efforts for a single month, we could run the risk of losing more subscribers than getting new ones, which would certainly reduce the bottom line.

But if we can reduce that 10% churn to just 7%, we'd be retaining 30 subscribers every month, leading to a much smaller decrease in revenue.

Track your active subscriptions, MRR, churn, and more in one dashboard

How to Reduce Churn

Here are the most common reasons subscribers churn, and what you can do to prevent that from happening:

1. The App Doesn't Have All the Features or Content They Need

This means that when they don't see the updates they expect or can't find all the content they need they are more likely to churn. Some users need specific features you don't have yet while others simply can't find them.

Luckily there are several ways to combat this type of churn:

2. They Can't Use the App to Do What They Need

Users need your app to work. It's important for all apps, but even more so for apps that charge a subscription. That's why it's important that you actively work to prevent bugs and also proactively find and eliminate existing ones.

3. They Forgot About It

Some users subscribe for a specific task, use the app once, and forget about it. Then, a few billing cycles later realize they're still subscribed and unsubscribe. Keeping these users from churning requires showing them the ongoing value of the app.

4. The Price is No Longer Right

Price plays an important role in a user's decision to continue paying for a subscription. Just like the tip above, you as the developer of a subscription app need to constantly remind users of the value of the app.

5. They Just Don't Need It Anymore

That's why a canceled subscription shouldn't be a goodbye. Here are a few ways to do that:

You probably noticed we talk a lot about email in this guide. That's because email is a great channel to reach your users in a way that isn't too intrusive. Getting email right isn't easy, but as long as you use common sense (don't send too many emails and make sure what you send is relevant) and best practices we guarantee you'll see positive results. 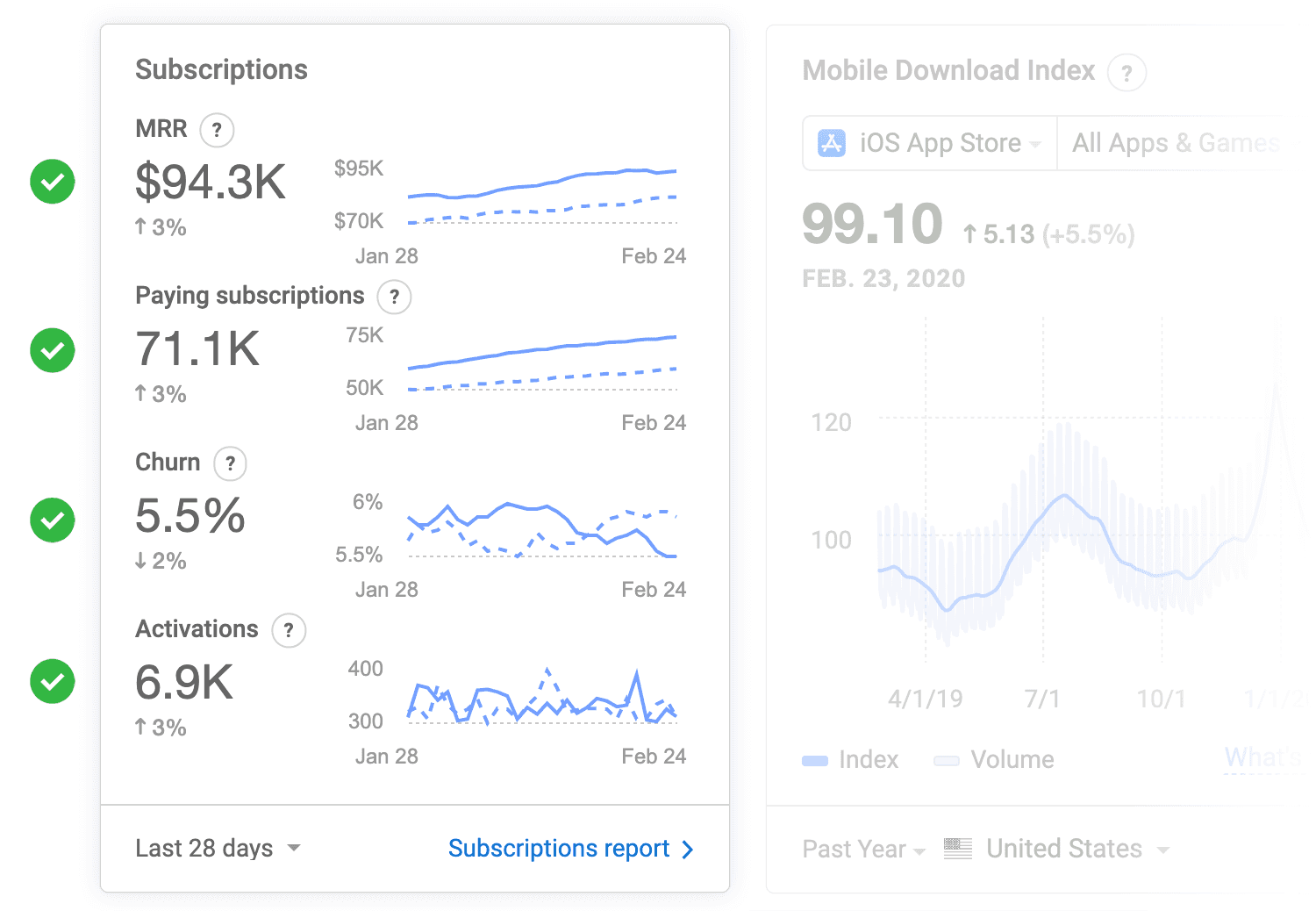 Fighting churn may feel daunting at first, but so did getting your first app to compile, right? Monitoring how your subscriptions perform is the first step towards improving your churn and also your bottom line.

Whether you have a dedicated team that optimizes your subscriptions or you're a solo dev with an hour to dedicate to optimizing every month, the key to seeing improvements is to do as much as you can.

Appfigures helps you analyze your revenue, monitor store performance, see market trends, track competitors, and optimize all of your apps to get more downloads. Sign up for free →