BeReal is Now Posing a Clear Threat to Instagram's Growth

Instagram is prototyping a new feature that'll ask users to take pictures at a specific time and share them with their friends. If you think this sounds exactly like BeReal, the most downloaded app in the US for the last few weeks, you're correct!

When BeReal started growing, I hypothesized that if they could maintain enough momentum that big rivals would take note, the simple concept could become sticky.

Fast forward not-so-many-months, and this is happening.

And the answer, as you can imagine, is... 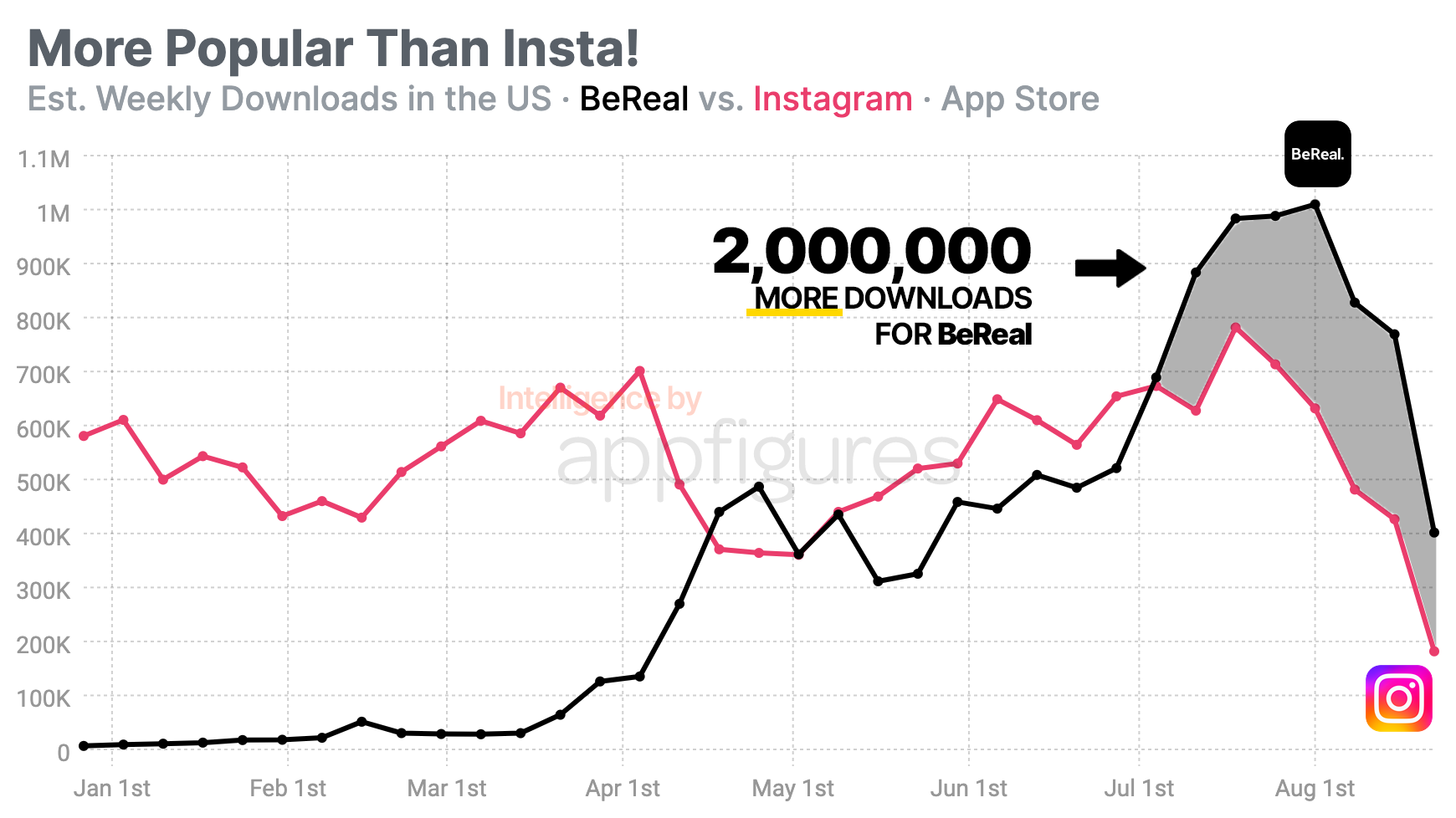 BeReal has gone from an unknown name to the #1 app in the US App Store, and in the process, has been downloaded more than Instagram in the US in July - For the first time.

When the year started, Instagram was getting roughly 100x the downloads of BeReal. That's not too hard, considering BeReal didn't start getting popular until April.

Looking at the trends for both, it's clear Instagram's dip was a result of BeReal's rise.

But BeReal continued to grow, and by July, it had taken the lead again. This time it wasn't temporary.

According to our estimates, between July and August, BeReal dominated Instagram in the US, adding 6.5 million new downloads from the App Store. That's a whopping 2 million more downloads than Instagram.

FYI - I focused on the App Store because that's where BeReal is most popular. I'll get to why that matters in a few sentences.

I'm only slightly surprised that BeReal has gotten so much traction so quickly and consistently. Instagram hasn't really done anything interesting in the last few years, and people are bored. It went into war with TikTok, the only new thing to happen in the space, but that's no longer news.

Combine that boredom with the ever-shrinking attention spans of today's mobile users, and BeReal fits right in.

Overall though, this isn't good news for BeReal...

The app is really nothing more than a "feature" and hasn't found a good way to monetize. Its downloads are high in the US but only on the App Store, and aren't really comparable to Instagram anywhere outside of the US. I see it as an opportunity for BeReal, but also an existential threat if the team behind it can't figure it out fast enough.

Now that Instagram is after them, the clock is ticking.