When you think shopping, you think Amazon, right? The more than 64 million new users who downloaded its app so far this year certainly think so.

A hyper-optimized shopping experience, super fast shipping, and a never-ending catalog gave Amazon the upper hand when it comes to "buying from phone," which extends to pretty much everything that can be sold—including fashion.

But as Amazon's downloads slow down, a new app is taking the lead. 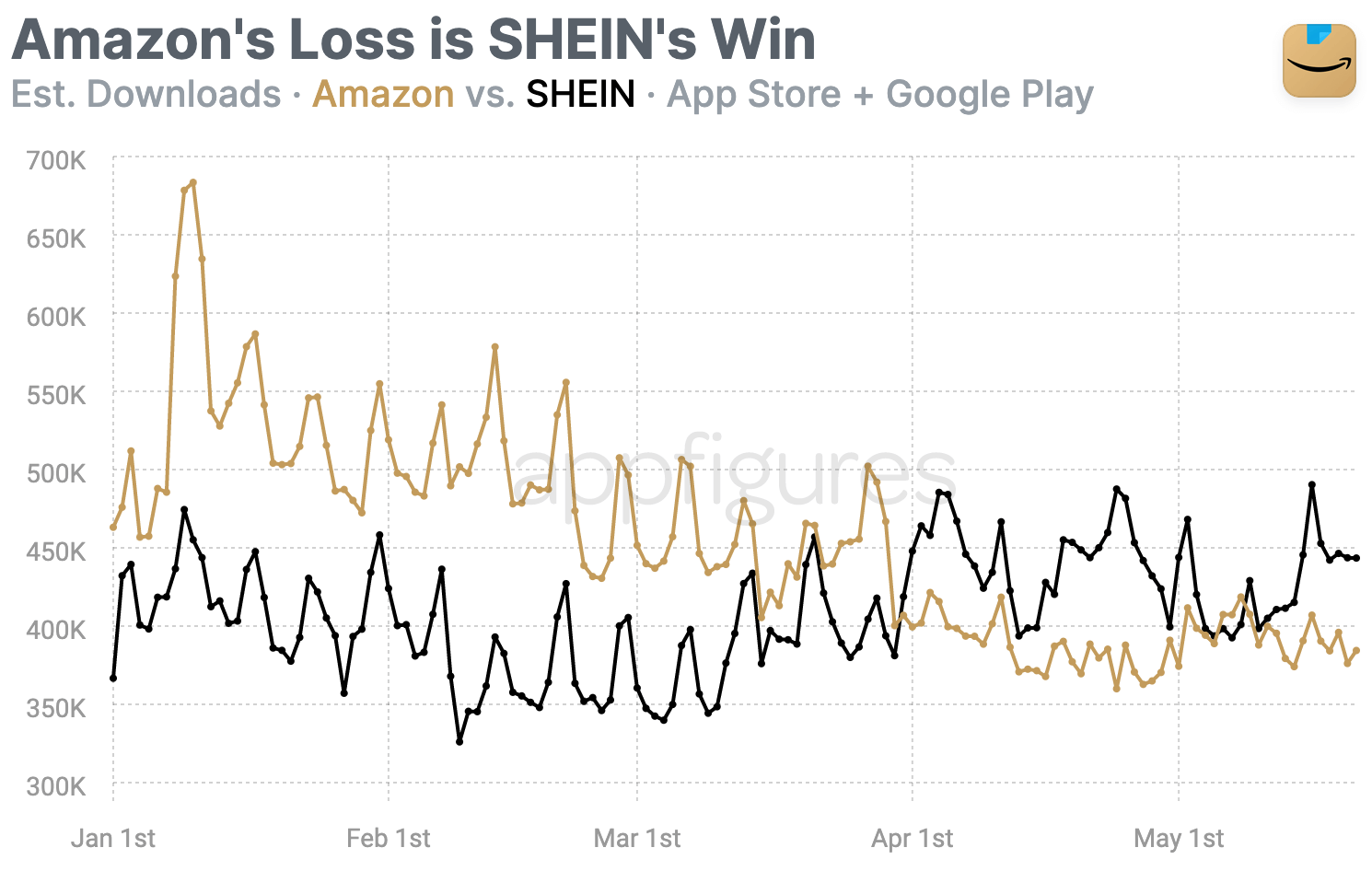 SHEIN is the Chinese-based fast-fashion retailer that’s giving Amazon a run for its money right now.

Over the last few months, a combination of declining downloads of Amazon and an increase in demand for SHEIN gave it a lead in downloads in the last month.

In numbers, that means SHEIN went from a little under 400K downloads on an average day in early 2021 to a little over 450K, an increase of about 13%. Amazon, in the meantime, managed to lose about 35% of its daily download, dropping from an average of 550K downloads to a tad under 400K, based on our estimates.

FYI - SHEIN is banned in India because it's a Chinese company. In sharp contrast, India is Amazon's largest market this year, out downloading the U.S. nearly 2-to-1. Just imagine what would happen when SHEIN is allowed back.

A Closer Look at SHEIN's Growth

The app isn’t new but has mostly stayed out of mainstream news, which is why the name still results in a "who?" response from most people I've asked. That doesn't seem to stop the downloads, though.

Its secret — absurdly low prices for women’s fashion and an army of influencers who can’t stop raving about it. 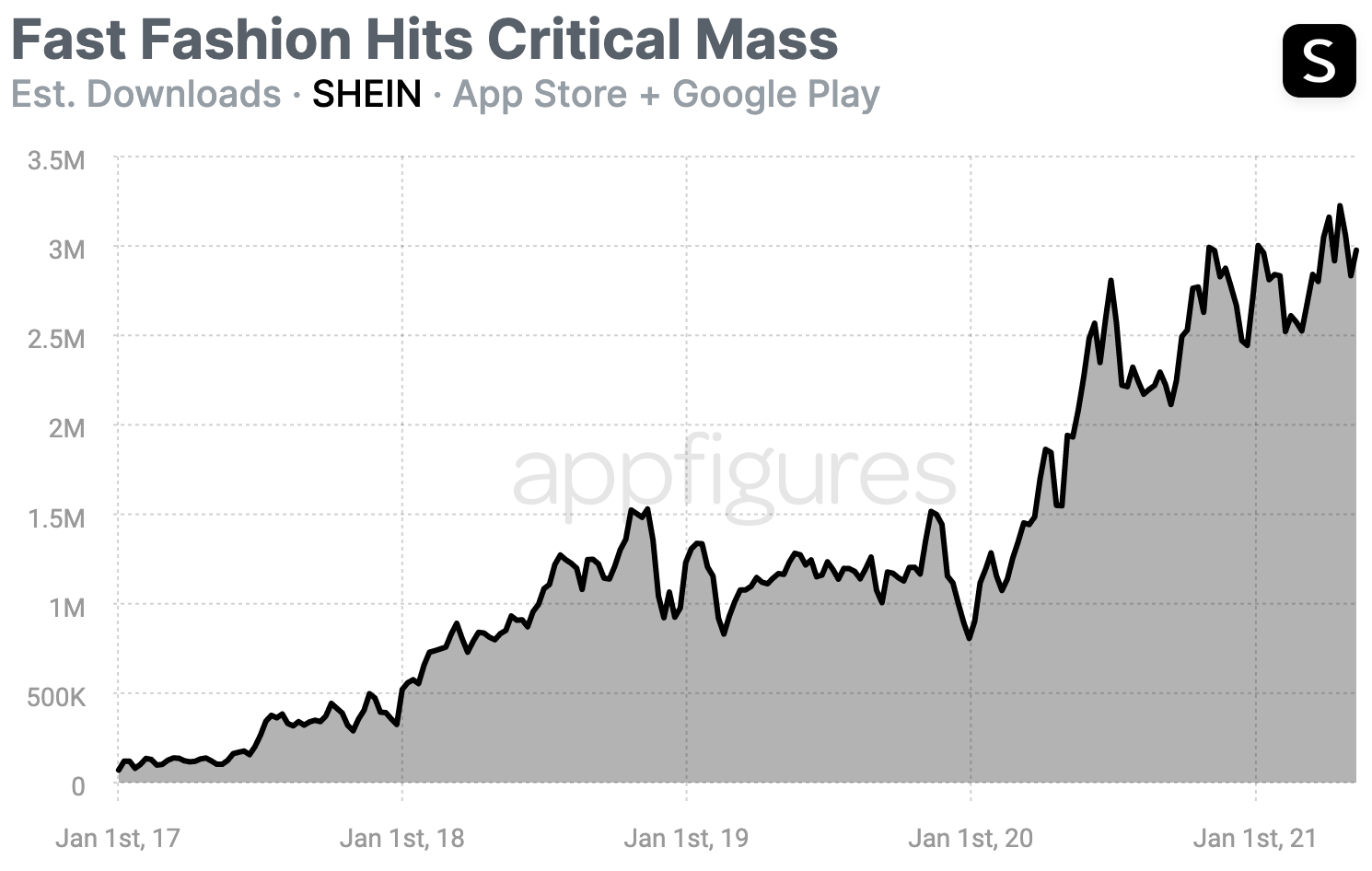 Let's take a look back to 2017 to see how downloads evolved:

Digging a bit deeper, let's have a look at where these downloads are coming from. The short answer: everywhere!

Here's where SHEIN got most of its new users so far in 2021: 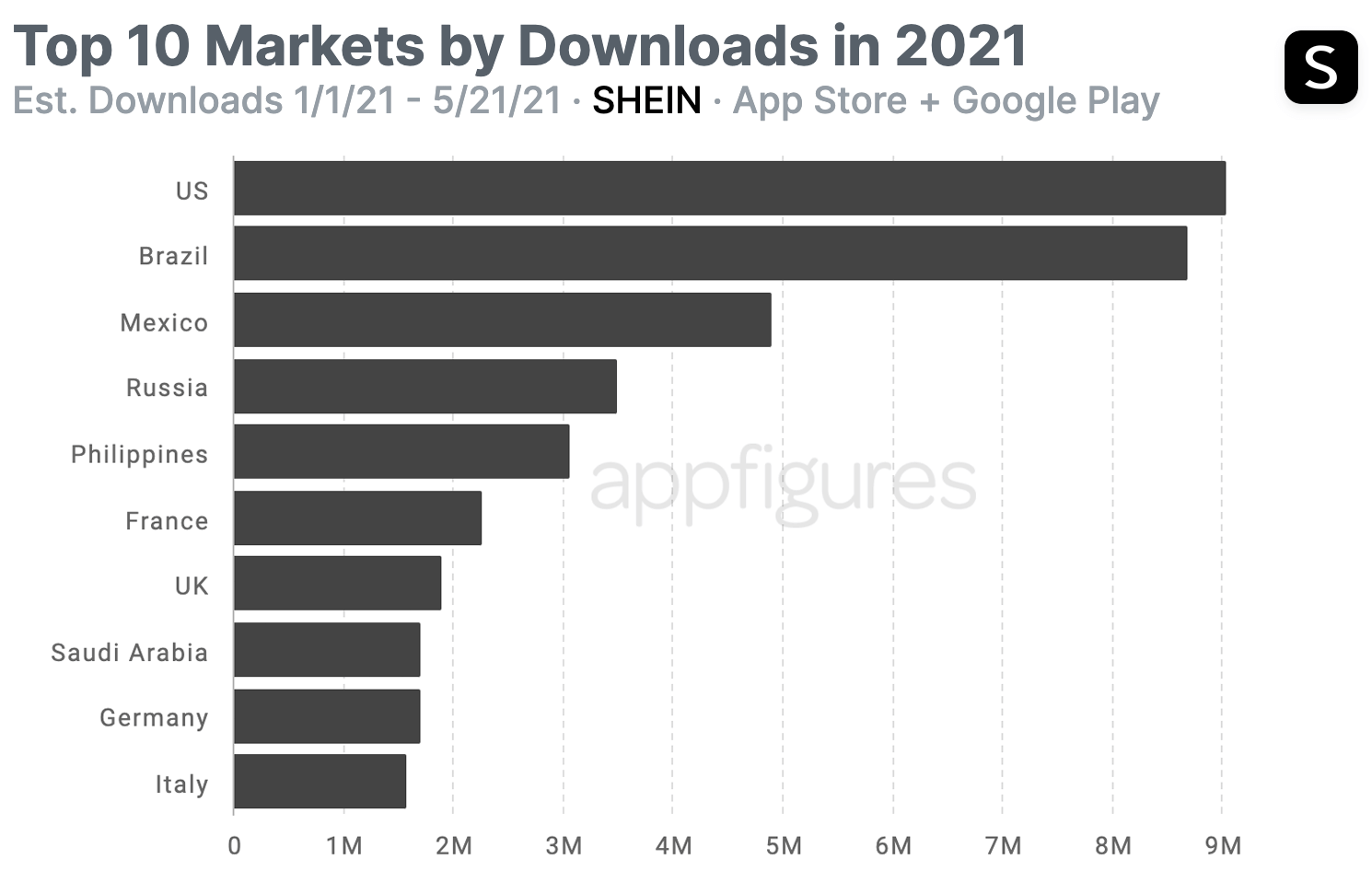 SHEIN is growing fast in the U.S., with Brazil is right behind it, both contributing roughly 15%, each, to downloads. It's important to note that Brazil is also a massive market for Amazon and was responsible for about 10% of downloads as well.

Mexico (8.5%), Russia (6.1%), and the Philippines (5.3%) round off the top 5 countries with the most downloads. Amazon does not have a strong foothold in those countries, unlike in Brazil, which can be seen as a serious threat.

Amazon has been challenged before, and for the most part, succeeded in regaining its top rank, but so far it hasn't met a match as strong as SHEIN. Is fast fashion just a phase we're going through right now? Will it stick around and lead the way?

Those are all questions we'll be keeping an eye on.