#29 - Help the Algorithm See you to Get Better ASO results

We already know search results come from proper keyword placement. But, that's mainly helpful in deciding which apps (or games) to include, not where. The sorting is a whole other thing.

It's not common to come across a keyword with a competitiveness score of 100 and a popularity score that's in the low 20's, but those definitely exist. Here's an example. 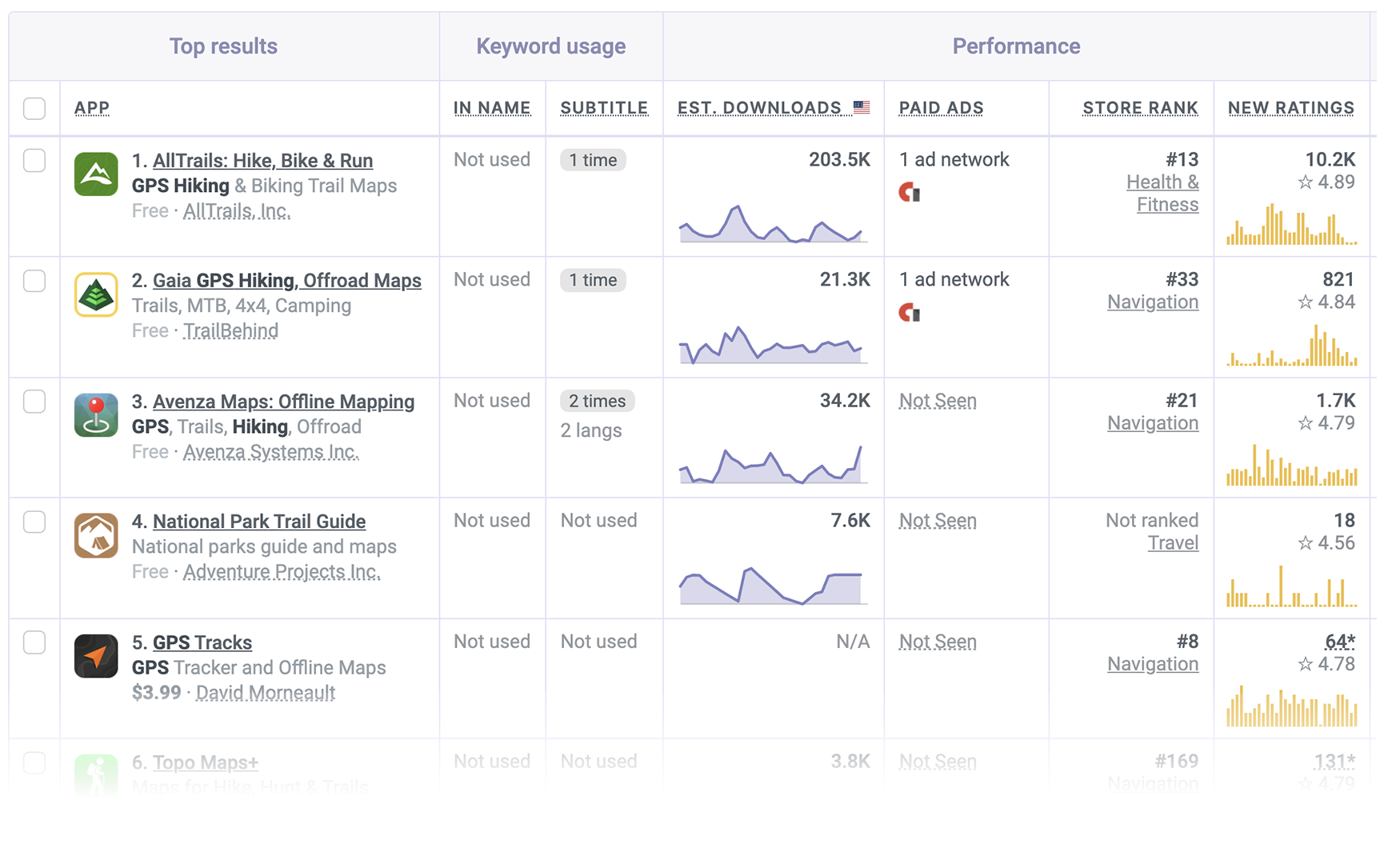 At first glance, I see what looks like the algorithm doing what algorithms do... Follow the rules. But that bottom is a bit weird. Let's start with what makes sense.

AllTrails has the keyword at the beginning of its subtitle and also has the most new ratings in this group, so it shouldn't come as a surprise that it's #1.

Behind it is Gaia GPS, which uses the keyword in its name. No duplication or other ugly mistakes. But, a fraction of the new ratings, which is why it's sitting pretty at #2. I believe Gaia doesn't need to beat AllTrails' new ratings but just get close. The algorithm will reward the focus it's putting on the keyword, and it can slide into #1. It's hard to estimate how many new ratings, but I have a feeling 3k - 5k would do the trick. What do you think?

Why do I think that? Well, if we look at #3, Avenza, we can see it has more new ratings, so it should be higher. But! It's using the keyword in its subtitle, which hurts its chances. Because the ratings are close enough, the keyword placement becomes very important and allows Gaia to win this race.

This is where things start to get weird.

The fourth result doesn't mention "hiking" or "gps" in its name or subtitle. The keyword is (very likely) in the keyword list, which, as you can see, is very useful here. That + a decent number of downloads give it this rank.

Don't get me wrong, this one's odd for sure, but while signals like new ratings are strong, downloads still play a role. When the algorithm doesn't know what to do, it looks at that, too.

And at #5 I have another treat for you. A paid app! That's right. We don't see those often, but we are right now.

GPS Tracks squeezes into 5th place even though it costs $3.99 to download. Paid apps are a dying breed, but it's a great reminder that with good keyword placement and new ratings, even they can rank.

New ratings are the algorithm's go-to metric in case apps use keywords the same way (or similar enough). More is always better, but even getting close could be good enough.

Make sure to ask every user you have to rate the app. It's not too difficult thanks to the built-in ratings popup. It'll help you instantly.