#30 - Are Low-Popularity Keywords Easier to Win?

Are lower-popularity keywords following the same rules as the more popular ones? Simple answer - yes.

I want to tackle a keyword that has the lowest popularity I've analyzed in this series so far. A popularity score of 15 means that some people are searching for it, but not many. Enough to be a good starting point if you can't rank in more competitive ones and a good one for a long-tail keyword, but that's pretty much it. 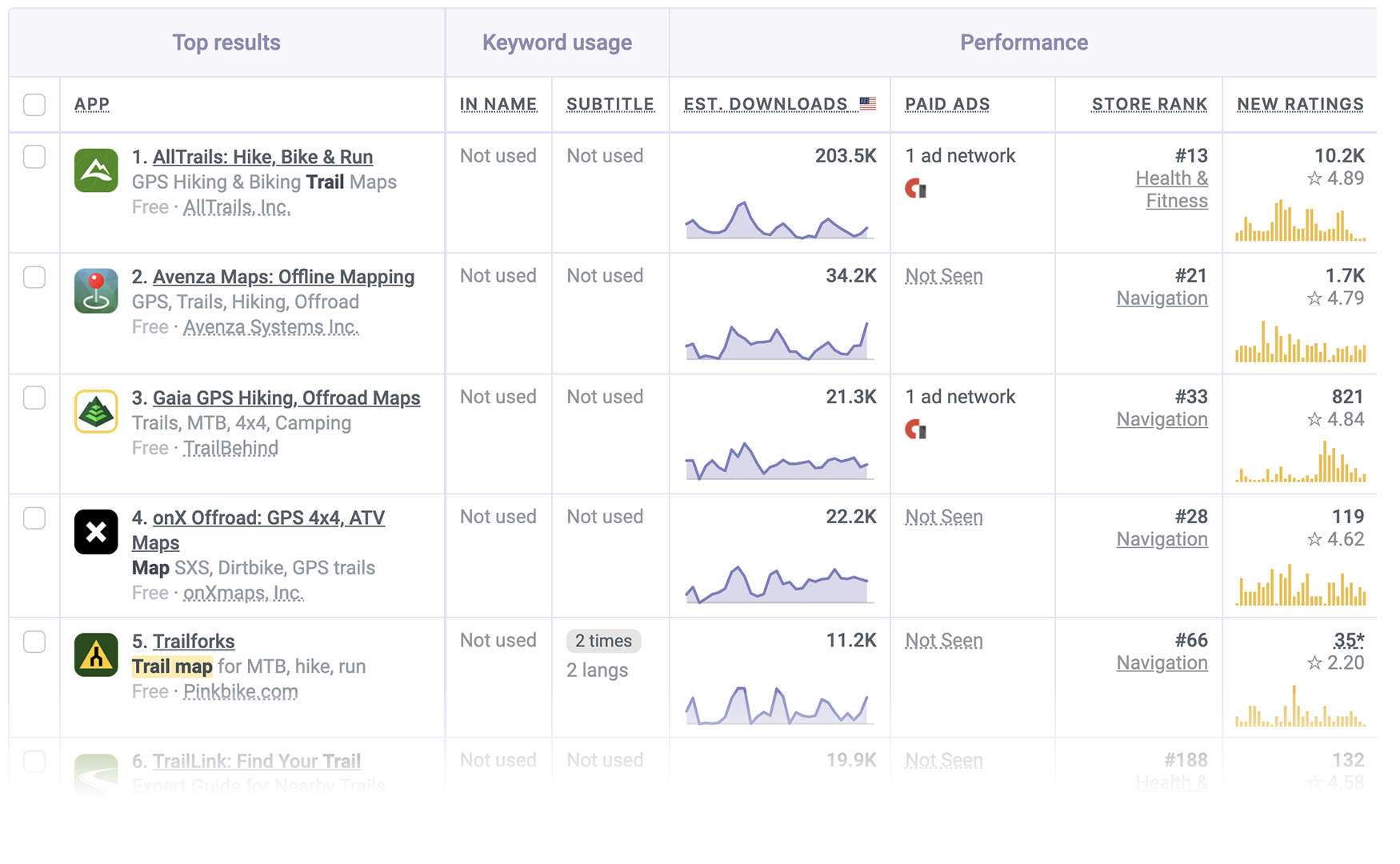 At first glance, it looks like someone clicked the sort button on the ratings column here. Why's that? Because that's what Apple's algorithm uses when all of the options it has to choose from are fairly similar in how they use their keywords.

Low popularity keywords are usually not on anyone's main keyword list, which is why you'll rarely see apps targeting them. That means the algorithm will usually have little to go on. Maybe a word in the subtitle and another in the keyword list. Maybe in the name. It's rarely as clear as more popular ones. And that's a great opportunity!

At #1 we have AllTrails, which is the most popular name in this category. Aaaaand, the one with the most ratings. It uses the words sequentially in the subtitle. That's not hurting either.

Right behind it is Avenza, which has nearly an order of magnitude fewer ratings, but the keyword appears in the name and subtitle.

Tip: While the algorithm can pluralize (ex. "map" = "maps") that's pretty much all it can do, which is why Avenza uses both "maps" and "mapping" and it's not considered duplication.

Gaia GPS, which is a pretty clever name! is holding steady at #3 by including the term between its name and subtitle, and with slightly less ratings than Avenza and more than the 4th place competitor.

Fourth is onX, which includes the term split between the name and subtitle, like its competitors. Except that it duplicates "map" and "maps" so it's only technically in the subtitle as far as the algorithm is concerned. It doesn't really matter, though, because it has far fewer downloads than Gaia, which I don't think is named after the progressive trance group.

Last for this set is Trailforks, which uses the term right in its subtitle. With a short name, it's also putting more focus on the keyword, which is great. At a little under a third of new ratings, though, the focus isn't helping it. This is a good time to experiment with the term right in the name and also to try and get more users to rate the app.

And there we have it. Even low popularity keywords follow the rules. I like the idea of starting big. Who doesn't, right? But if you just can't compete on bigger keywords, you can always start here. Now that you know how to win these, of course.

Low popularity keywords follow the same rules we've seen all along and are easier to rank in because most other apps don't focus on them. Use them as your stepping stone or for practice.