When you do ASO enough, you start seeing patterns that simply don't make sense. But the search algorithm – which is just code at the end of the day – bases its decisions on what it sees. So when things don't make sense, it usually means it looks at something you're not considering.

In this teardown we'll look at an example of that, and possibly a new item to consider for ASO in the App Store.

Time tracking is a sibling of time tracker, which I looked at in Keyword Teardown #36. It's not a super popular keyword, but with a tip from a reader, I noticed something very interesting I wanted to share.

In first place we have HoursTracker, which does everything* right. And by everything, I mean, there's no duplication. Yet, there are similar enough words, so the metadata targets a wider variety of keywords. With the most new ratings in this set, the algorithm can't do anything but lift it to the top.

The * is there because the keyword in this case comes in the subtitle and not the name, which isn't as ideal. But... None of the other serious competitors use it in the name, and it's the first thing in the subtitle, so it can get away with it.

I talk about how ASO is relative and what's good for your app is necessarily what's better than your competitors and no one else. This is a good example.

In second place we have Toggl Track, which doesn't things slightly less good, but still alright. It splits the keyword between the name and subtitle and has an order of magnitude fewer ratings, but it's still where it belongs based on where the keywords are and its new ratings.

Below it, where things still make sense, we have Timeline, which uses the keyword right in the name, keeps it short, and has no duplication. Great! But... It got two new ratings in the last 30 days. Just two. That isn't a lot, and I'm being generous with words here.

Maybe the app below it has even fewer ratings?

Nope! In fourth place we have Quickbooks, a name you've probably heard before. It's not getting nearly as many new ratings as I'd expect given the brand, but 136 is still many many more than two, so what's going on?

Put this on hold for a minute so we can finish with this set.

In fifth place, last for our set, we have what looks like a clone of the app that's in first, in terms of keywords at least. It's using the keyword right in the name, but duplicates the whole thing in the subtitle. Bad bad bad. With 35 new ratings, a quarter that of Quickbooks, the algorithm can't lift it any higher.

Are You (Apple) Watching It?

I was puzzled by this for a bit, but going off of a tip from a reader, I looked at which devices these apps are available on.

Tip - You can see which devices an app is available for in the App Intelligence panel by clicking its icon from the results list. You can see a bunch more about an app there, but sandwiched right between the category of the app and its screenshots is the list of devices it's available for. 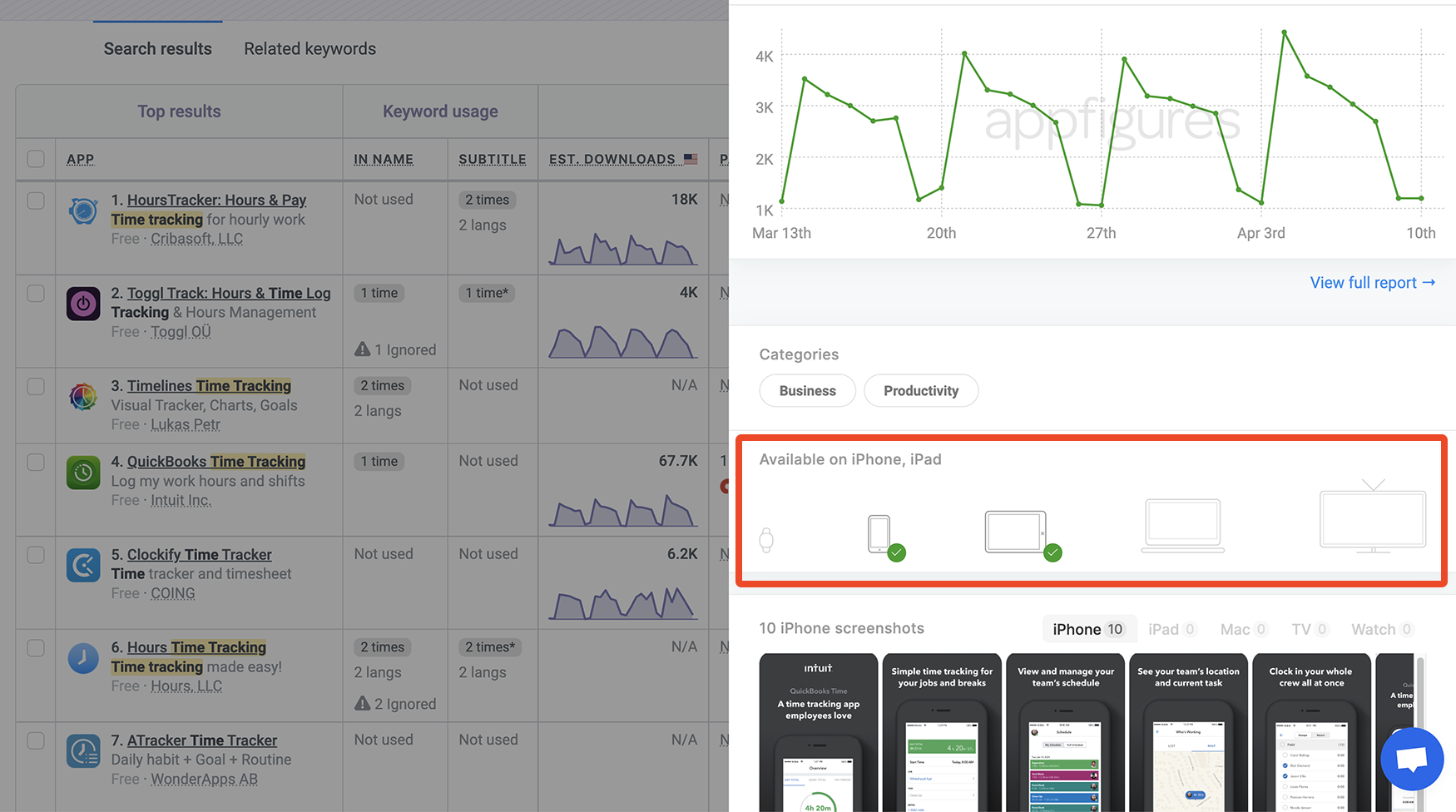 Does this definitively mean having a watch component improves your ASO? Not definitively, but it is something I'll be investigating to understand if it's a signal, and if so, how strong of a signal. Make sure you're subscribed to the newsletter for more on this, in case you aren't already.

Optimizing For the Most Competitive Keyword in the App Store

You can rank for even the most popular keywords if you know what mistakes to avoid - here's how.

How to (NOT) Do App Store Optimization

Here's a keyword every top result messes app, and how to fix it and become the top results.