Are all crazy-competitive keywords impossible to rank in? With so many apps in the store, that's an easy yes, no? Well, not really. We'll look at one example in this Keyword Teardown.

Audiobooks have risen in popularity a lot in the last couple of years, and while many know the most popular name, there are many many (many) audiobooks fighting for downloads in the App Store. So how can you beat big names? 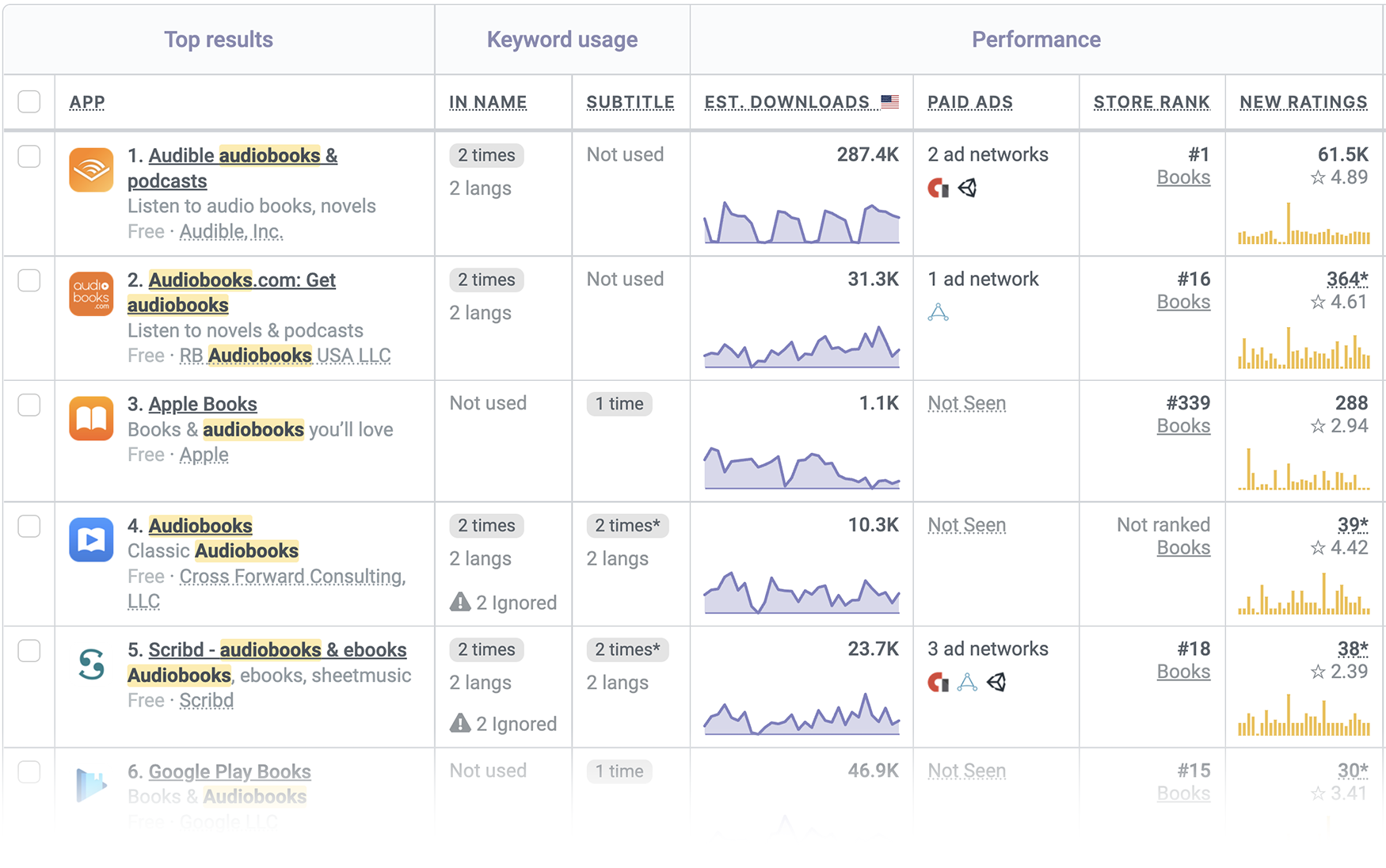 In first place we have Audible, which not only gets keywords right but also gets the most new ratings, by far. Audible uses the keyword right in its name and early and doesn't repeat it in any way in the subtitle. If I had to take a wild guess, I could tell you it isn't in the keyword list either.

Then come the 61,500 ratings. Of the top 15 results, only two apps get closer. One of those is the Kindle app, also from Amazon, which has a higher downloads to ratings ratio. But... The Kindle app didn't make it into the top five here because it doesn't use the keyword in its visible metadata.

Proper keyword placement and loads of new ratings give Audible its top position.

Right below we have Audiobooks.com, which manages to snag second place with keyword duplication in the name and just 384 new ratings (in the last 30 days in the US). A teeny tiny fraction of the ratings Audible gets, but only one spot below it.

Why? Well... because everyone else manages to mess up one way or another, and Audiobooks.com messes up the least...

I'd still remove that duplication to have a bit of a stronger standing in case any of the others read this teardown.

In third place we have none other than Apple's built-in app. I normally skip Apple's apps when they appear at the top spot, but seeing it in third, I'll point out that it has the ratings to compete, and since it's not using the keyword in the name but rather just the subtitle, it can't get much higher.

The algorithm feels pretty fair with this one for some reason. Must be a fluke!

Moving down to fourth place, Audiobooks, that's right, the name is only the keyword, sits pretty with 39 new ratings.

Now, hold on, the name is the keyword, shouldn't it be higher? It could but it committed the cardinal sin of ASO and used the keyword again in the subtitle. Why? Why??

I'd remove the duplication and work on getting more ratings. 39 ratings out of more than 10,000 estimated downloads means it's not really trying. Just trying, even if not very hard, should really help and could push it above Apple's own app and into third place.

In fifth place we have more of the same. Scribd uses the keyword twice, unnecessarily, and with its 38 ratings is pretty much on equal footing with Audiobooks. More keywords in the name and subtitle reduce the focus, so it's sitting below.

I'm going to state the obvious, but with more estimated downloads than #4, cleaning up the name/subtitle and optimizing for ratings could give Scribd a massive lift. Possibly pushing Apple's app down.

Choosing an appropriate keyword, placing it where the algorithm can see it, and showing the algorithm your app matters by getting more of your downloads to rate it.

All three are important. One or two out of three aren't enough, but none should take very long to kickstart.

#57 - The Interplay Between Keyword Placement and Ratings

How you work keywords into your app's name, subtitle, and keyword list can make or break its ability to rank well. Here's an example.