Do the features your app or game use have any impact on discovery? Why, yes. Yes they do. That's what we're going to look at in this teardown, plus a bonus find about subtitle.

Backgammon is a great game, but I don't know many who play it, so I look for new apps in the App Store all the time instead (and have downloaded most). This time when I looked, I noticed two totally separate, yet very interesting, things that are pretty useful if you're a developer.

Let's have a closer look. 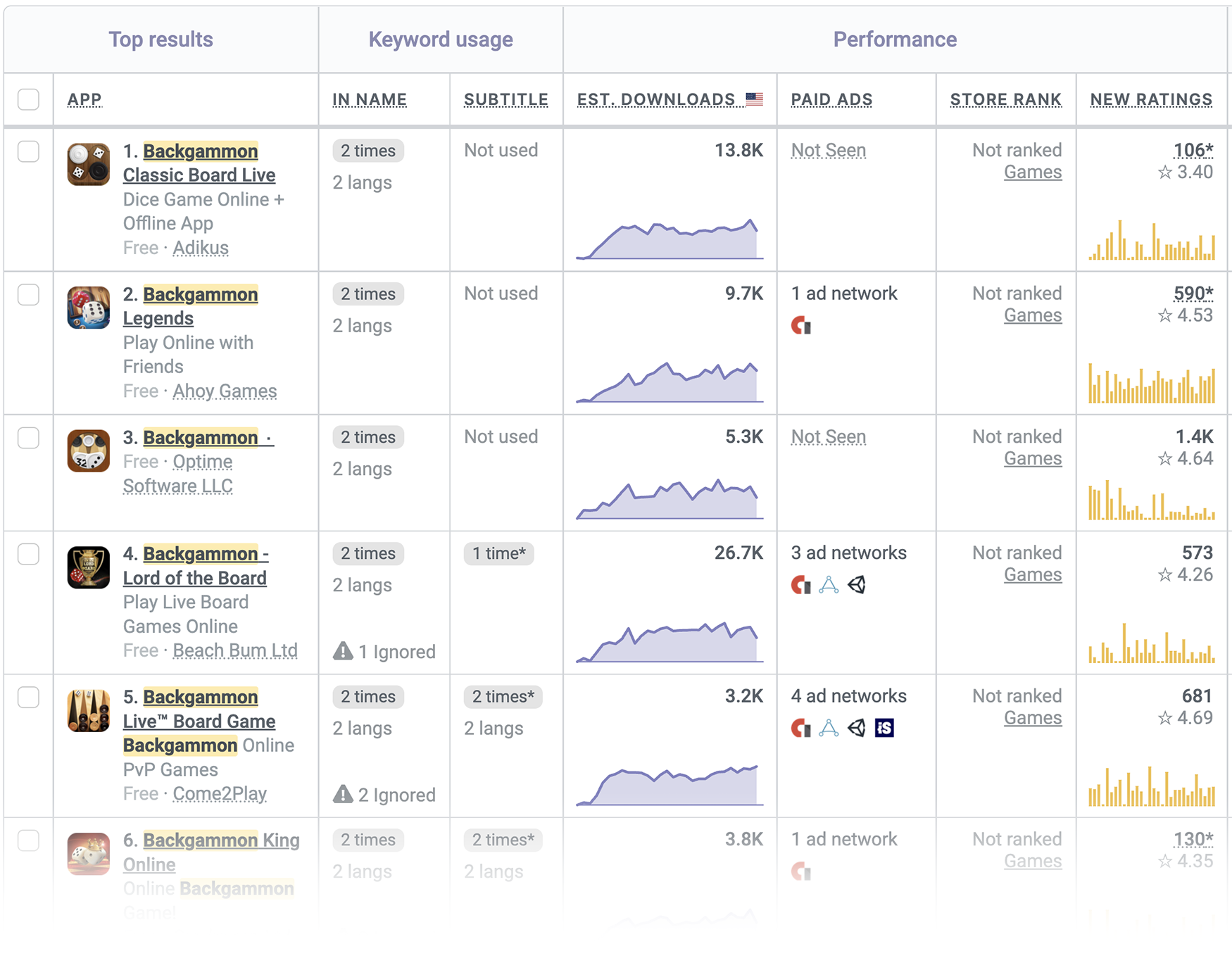 Our first result for this single-word term is Backgammon Classic Board Live. The keyword stars in the name and isn't repeated. Great! But... it earned the least ratings of the top 5 results.

Mistake? Not really! This app is on top for a reason, and we'll get to this reason in a few short moments.

Right behind it is Backgammon Legends. A short name that opens with the keyword, no repetition I can see, and more than 500 ratings. Great! But... it earned fewer ratings than the results right below it.

Another mistake? This is the other interesting finding, and I'll get to that right after we look at the third result.

In third place, we have Backgammon ∙, which uses the age-old trick of quirky character, but has no other words nor a subtitle and is getting the most new ratings of the top 5.

Well, it's time to start explaining.

Look at the metadata - there's not much going on. One word, one character, no subtitle.

A while back, I suggested that no subtitle could be a good strategy to increase focus. I didn't like it for many reasons and suggested not even trying it, and it looks like Apple caught on and recently started penalizing apps that don't use a subtitle.

This is a clear case of that. #3 gets more ratings than the first and second results, combined and multiplied, but isn't able to rise because it has too much focus and no subtitle.

I'm not sure why Apple would allow not having a subtitle and penalize for it, but I've seen it happen in enough keywords in the last few weeks that I'm pretty sure this is happening.

Let me finish with this set, and I'll explain what's going on with the first result, and, as you'll see soon enough, both the fourth and fifth results.

In fourth place we have Backgammon - Lord of the Board, which follows the template all other results in this set follow. It starts its name with the keyword and then adds something unique(ish). With more than 500 new ratings, it isn't the biggest, but also not the smallest.

So what does the top result do that none of the others do?

If you look close enough, you'll see the top result uses Game Center, an Apple feature. An old feature, sure, but one Apple still supports and obviously one Apple still rewards in results.

Apple rewards apps that use in-app events and featured in-app purchases, so this shouldn't come as a surprise. I'm not saying you should go out and implement this relic, but if you're up against a competitor that has, you'll need a better strategy.

I'm pretty sure that if #3, which happens to be my favorite, adds a subtitle (without repetition) it could climb to the top very quickly as ratings should outweigh Apple features. But that's something I'll keep an eye on for a while.

Apple rewards apps and games that use the more eclectic features of the platform. In this case, it's Game Center, but we've already seen many instances of the algorithm rewarding apps with in-app events and featured in-app purchases.

Leveraging more platform features isn't as easy as changing keywords, and likely needs to happen when designing the app and not when it's already built. But, it's one of those pieces of knowledge that are great to have in the back of your mind as you start something new.

#57 - The Interplay Between Keyword Placement and Ratings

How you work keywords into your app's name, subtitle, and keyword list can make or break its ability to rank well. Here's an example.