In the last Keyword Teardown, we looked at how the position of the keyword can change how much the store thinks the app is relevant for results, ranking it higher or lower. In this Teardown we're going to continue to look at placement, but this time a level deeper.

In this Teardown I'm flipping things around, so lesson first, examples second. If you want to rank for a multi-word keyword, you can't split it between the name and subtitle, and the two words should be consecutive. 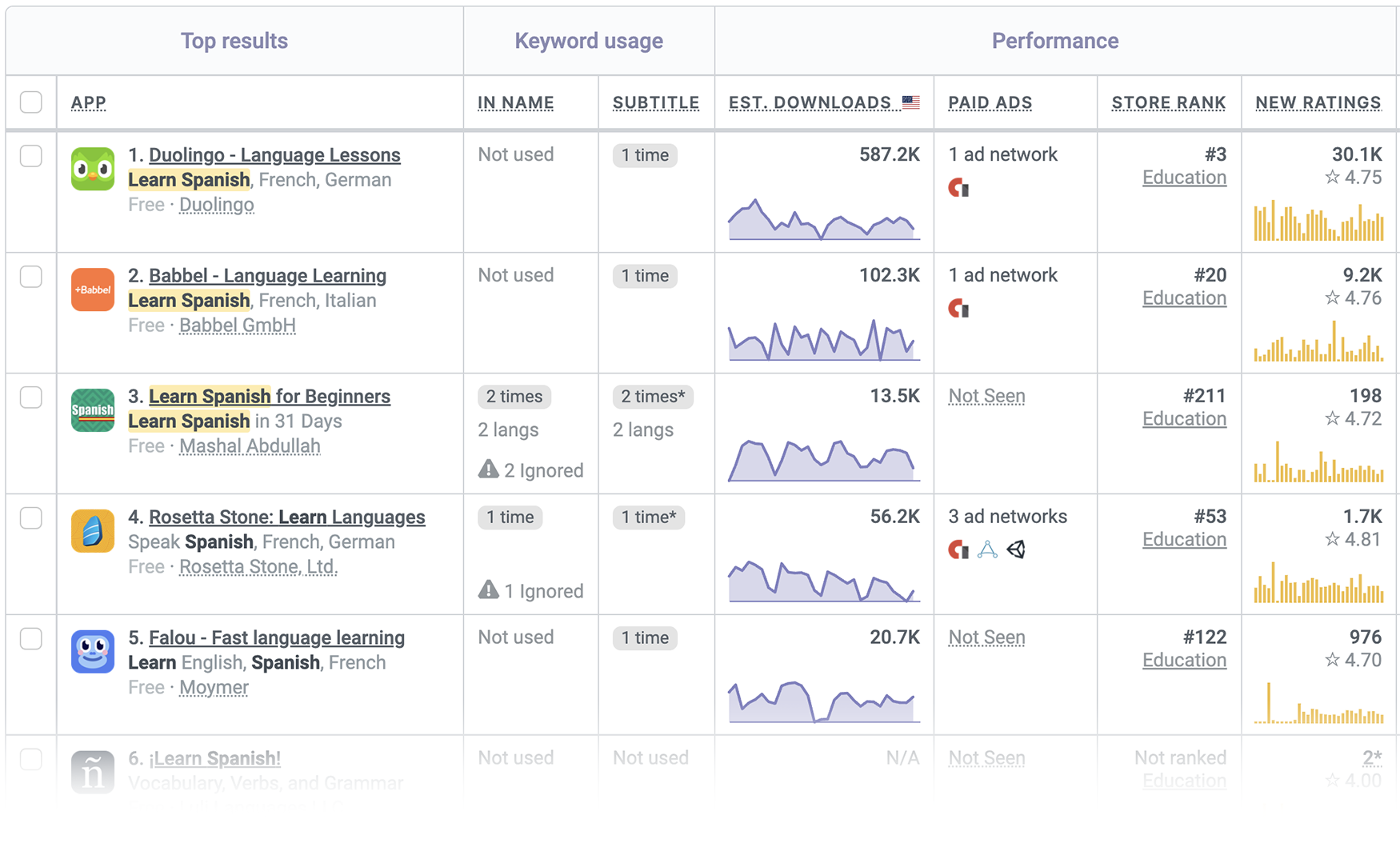 The top spot goes to Duolingo, the most popular name in this category and the highest earner by far. Notice how Duolingo doesn't use the keyword in its name but rather the subtitle. At first glance you'd think it's because it's a secondary keyword, meaning what's in the name is more important.

But! The keyword "language lessons" has a popularity score in the single digits. Taking away the "s" doesn't help.

I'd guess this is done for branding reasons. If Duolingo puts "learn spanish" into its name, it might be seen as an app only for Spanish. The subtitle has a few more characters so they can list other languages and show it's for more than just Spanish.

I could be wrong, though. It might have something to do with the sequence of words...

Right below it is Babbel, which uses an almost identical subtitle. That makes perfect sense considering it's working for Duolingo, and the two apps do the same thing. Babbel replaced German for Italian, but that's not a big change. In fact, "learn german" is just a tad bit more popular.

At a third of the new ratings as Duolingo, Babbel is exactly where it can be.

Moving on down we see a no-brand app that's all about keywords. At a tenth of the ratings, it's doing pretty good for itself. But as you'll soon see it's not thanks to their effort but rather despite those. Why? Because this app commits the cardinal sin of ASO and repeats itself and severely hurts its chances of ranking higher – yes, it can!

So far we've established the basics – Name first, subtitle second, and repetition between the name and the subtitle makes the algorithm ignore the name. We've also only seen cases where the whole keyword – "learn" and "spanish" – are together.

In 4th place we have Rosetta Stone, another well-known name in the category. Not as many ratings as the top two apps, but enough to outrank them with the proper optimization. Which... it isn't doing.

Rosetta Stone chose to do what Duolingo didn't and split the keyword in half. One part in the name and the other in the subtitle. The thing is... The algorithm prefers things to be together. So while it doesn't completely ignore non-consecutive keywords, it assigns them less weight overall.

For keywords that aren't as popular, this might not be very noticeable, but in this case, with millions of downloads on the line, it's very obvious.

Rosetta Stone's ASO targets "speak spanish" instead, which might sound like a great idea before we look at data, but when we do, we see it's a terrible idea because "speak spanish" has a popularity score that's about a third.

This is why I constantly remind to trust data first and gut second when it comes to keywords. It's also why we made Keyword Insights available on all of our ASO plans and not just the higher tiers. You need this data.

And in 5th place I have another interesting one for you! Falou, which I'm glad I don't have to pronounce on video (but, would you watch a Keyword Teardown if I record them?) manages to sneak into the last place in this set by using the keyword in the subtitle and having not-the-least amount of new ratings.

The obvious question here is, "why isn't Falou ranking higher". Although the real question should focus on why is the no-brand name app not lower, but we already answered that one.

The reason Falou is where it is has to do with the same issue Rosetta Stone stumbled into, but at a smaller scale. Falou splits the keyword within the subtitle, signaling to the algorithm that it isn't a strong combination. And the algorithm listens and down-ranks it.

It doesn't help that Falou has fewer ratings than Rosetta Stone above it, which leads back to the question from before, which we already answered.

Splitting multi-word keywords is a bad idea. It doesn't mean you can't do it, because if you attempt to never do it, you won't be able to optimize for more than one keyword. But it means that you shouldn't split your most important keywords.

That's all I have for you today. Make sure to subscribe to the newsletter for a new Keyword Teardown next week. If you have any questions or comments, you can find me on Twitter.

My ASO Tools Make a Difference