#59 - When Downloads DO Matter for ASO

App Store optimization tends to feel a lot more confusing for games than it does for apps, and it’s already a bit confusing for apps… There’s a reason - people search for games differently than they do for apps. But the principles of ASO are still the same.

Endless runner, the keyword for this teardown, isn’t a new category and is a rather popular genre overall.

But when I analyzed it, I noticed obvious mistakes that leave a lot of room for opportunity. 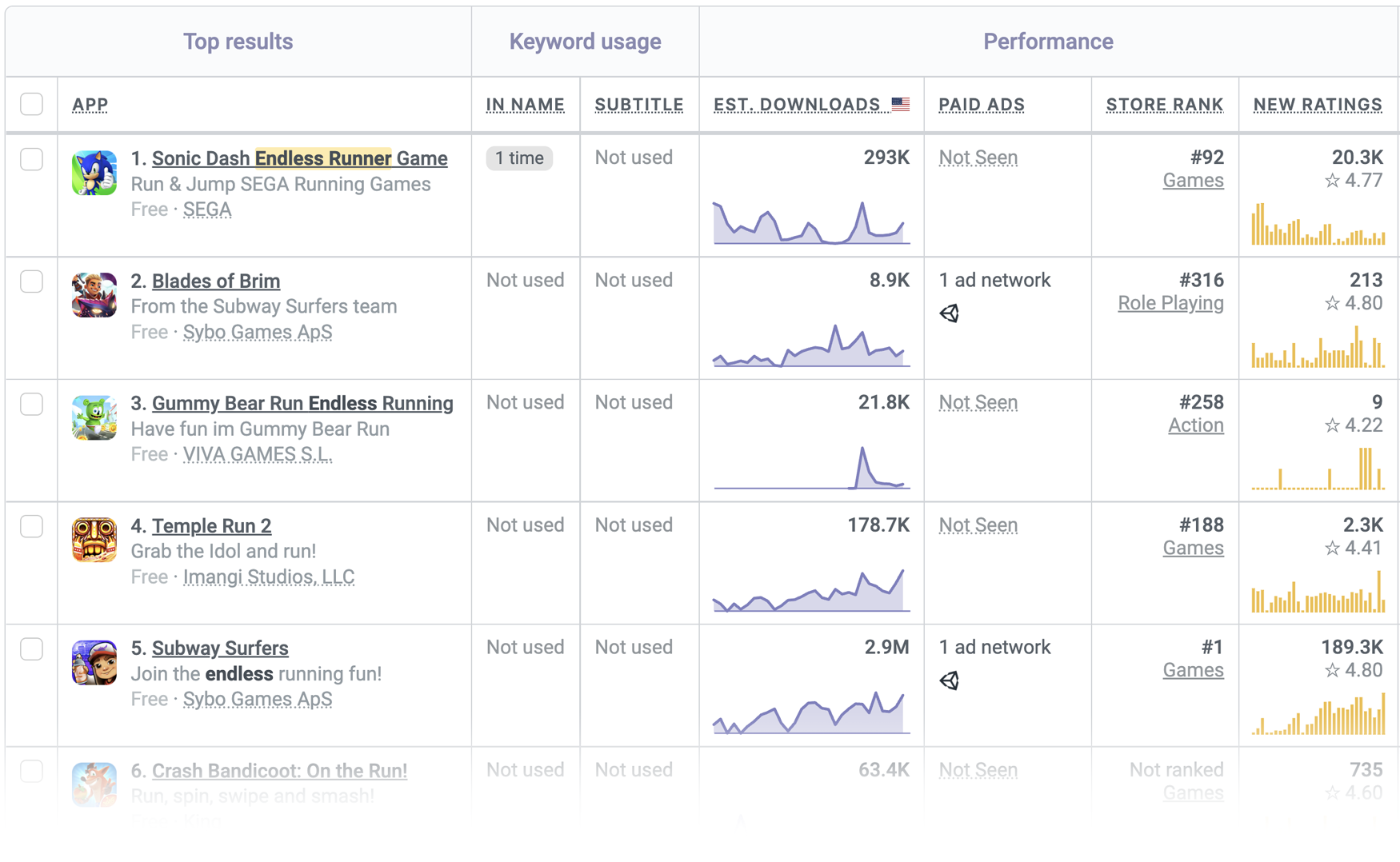 In first place we have Sonic Dash, and it’s there not because of its nostalgia brand but rather because it does ASO right.

The two words are consecutive, appear in the name and only in the name, and it’s getting a lot of ratings. More than 20 thousand in the last month in the US.

Below it is where things start to get confusing…

In second place we have Blade of Brim, which has no relevant works in its visible metadata. It also has very few ratings.

But it’s more than the other results in this set, making it just enough.

It comes from a very popular studio, the one behind Subway Surfers, one of the most popular endless runners, and while I don’t think that’s a factor here, it is something I’m investigating.

It gets up there because apps below do things incorrectly…

Side note - ASO is a battle over positioning, which is extremely limited, so for every winner, there’s a loser. For every gain in rank, there has to be a loss in rank. That’s why ASO is a necessity.

Moving down, we have Gummy Bear in #3, with just 9 new ratings. I’ll explain how in a minute — and yes, it’s related to the title of the teardown.

Right below is Temple Run, another staple of endless runners. With over two thousand ratings, you’d expect it to rank higher, but it has no relevant keywords in its name or subtitle. This leads me to believe the keyword list isn’t very optimized either.

And last in our list is Subway surfers, another staple and a very optimized one as well, with more than 180 thousand news ratings! But it’s not optimized for the right keyword…

I promised to get back to #3 but first let’s talk about the obvious mistake here — most games optimize for the wrong keyword!

Of the games that optimize, which is three of the five, two target “endless running” instead of “endless runner” even though that’s the more popular keyword.

Now… #3 is ranking there without many ratings because of something I looked at a few times - a BIG spike. This one is a spike of downloads, which we don’t see often. But we do know that while the algorithm rewards trends, it can’t ignore very big spikes, and those include downloads.

But it has to be a big spike. Downloads on their own don’t impact ASO.

Should you buy downloads or ratings to give your app a good chance to rank? Absolutely not. Will it work? Probably, but it can get your app removed from search results — you don’t want that.

Apple Search Ads are a great way to pay to get downloads. And if you do that, make sure you also ask for ratings.

Big spikes can catch the algorithm’s eye, and those span ratings and downloads. But generally, you should be optimizing for a consistent trend. That’s going to help more.

But really, make sure you’re optimizing for the more popular keyword. Especially if you can.

I get a lot of questions from people asking about results that are much lower, and why they don’t rank even though they have the right keywords.

My answer is (almost) always the same - not enough ratings or a very inconsistent trend. There are more mistakes that lead to poor ranks, but that’s usually what it is.

When Everyone's Making the Same Mistakes...

Want to find keyword opportunities? This is what you should be looking for.

The Answer to Competition is... Focus

This is how can new apps and games compete for better search results on the App Store.