The Answer to Competition is... Focus

Search results are mutually exclusive. For one app to rise, another must fall. There are many ways to rise, but the one we'll be looking at today takes advantage of this notion.

Event tickets are a big business. On the App Store, it's less about organic discovery as we can see by the not-so-amazing popularity score, but that doesn't mean apps have to ignore ASO. If they do, a competitor can gain. Small gains are the beginning of bigger gains... 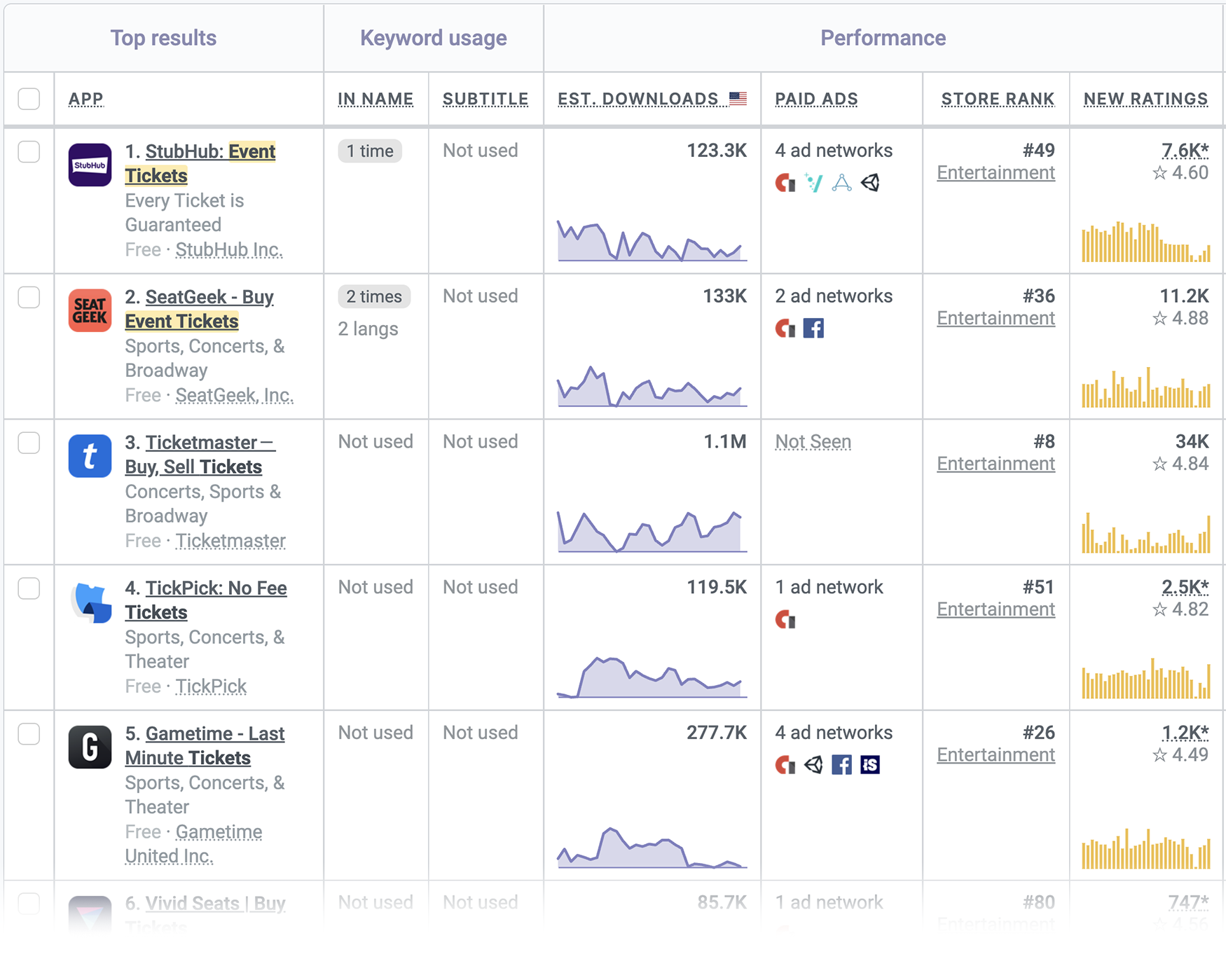 In first place we have the only app that targets the keyword succinctly. When it comes to focus, less is more, and less is the key here. Stubhub doesn't have the most ratings in this set, but it has enough to earn the lead.

Right below it is SeatGeek, which does everything right but spreads a bit too thin, and that knocks it down a position. It has the most new ratings but thins its keyword coverage by throwing "buy" into the mix. I looked at a variety of combinations, and every keyword with "buy" in it had a very low popularity making me think putting it into the name isn't the best idea. I could be wrong, though.

The most popular name of this bunch, Ticketmaster, has enough ratings to run three full circles around the top two but is sitting pretty at third because it's only showing half of the keyword. The algorithm notices it uses the other in its keyword list but won't rank it any higher – lots of ratings and all – because the keyword isn't there.

TickPick, the fourth result, follows in Ticketmaster's footsteps and has fewer ratings than #3 but more than #5, so it has to fit into #4. Makes sense.

GameTime, in fifth place, also follows the template and has fewer new ratings, so it closes the set.

Side note: If you're following along with Inspector and see apps with the full keyword in their names and wonder why those aren't ranking, the answer is pretty simple. They don't have any ratings, making them nearly invisible to the algorithm.

Also, I'm surprised none of these apps leverage in-app events more. That could greatly improve their chances of getting found.

Less is more when you're trying to take on apps with more new ratings than yours. Figure out what your target keywords are, make sure they're all very similar and specific, and fight the urge to spread thin. This is a good strategy for any app (or game) looking to establish a foothold and, even more important for new apps and games being released.

When Everyone's Making the Same Mistakes...

Want to find keyword opportunities? This is what you should be looking for.

Targeting a keyword because the competition is targeting it isn't always the best strategy. Here's what you can do instead.