There are many keywords that make for great ASO opportunities. Not because no one noticed them yet, but rather because all the top results do ASO wrong. I have another great example of an opportunity + a very unique result we don't come across often, so keep on reading.

For my first 3-word keyword analysis, I went with an interesting one – A function that's built into every iPhone these days that some people still don't know about. And I still because the popularity score on this one is very high.

But just because the popularity is high, don't expect perfect ASO. In fact, this is nothing but... 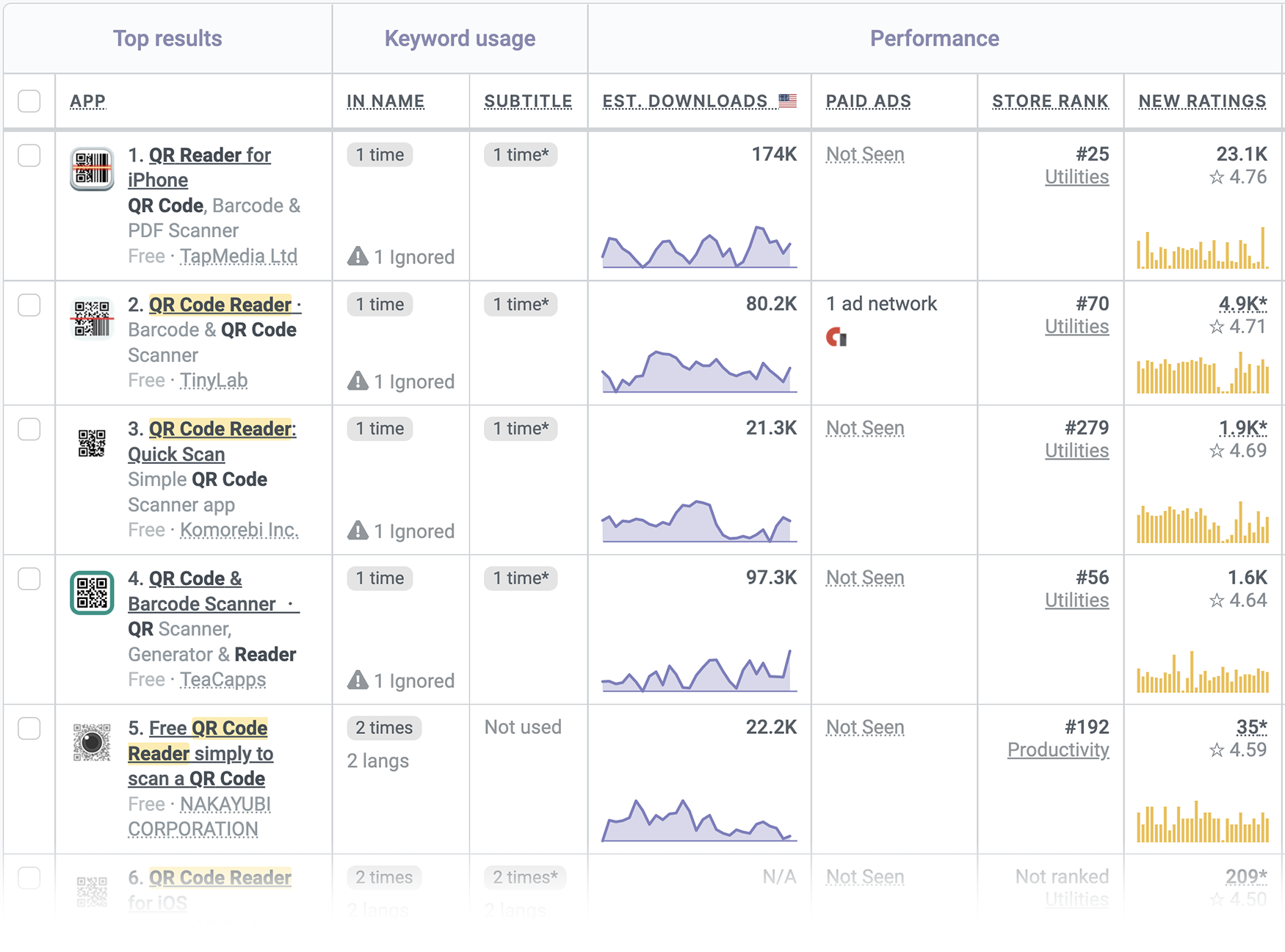 Before I dive in, most of these apps have no brand just keywords. That's a good way to get more keywords in front of the algorithm, but it's not pretty (in my opinion).

In first place we have QR Reader for iPhone. It earns the top stop by having the necessary keywords in its name and subtitle + getting A LOT of new ratings!

Astute readers and those following live with Inspector will notice the obvious issues with the name and subtitle: duplication and breaking up the keyword. This is the kind of stuff that can really hurt, but! As we'll continue our analysis, you'll notice all apps in this set make some mistakes. This one has the most ratings, which is its get out of jail free card.

Before I continue to the next result, I want to remind you this is a 3-word keyword with a popularity of 61 and a ton of ASO issues. Said otherwise, an opportunity.

QR Code Reader · comes in second. It's getting about a fifth of the ratings, which makes it easy to get ahead. But wait! What about the name being exactly the keyword? Yes, it's using the trick I've covered a few times before of adding a symbol the algorithm ignores to remain unique. But... look at that duplication. That's a problem.

I suspect cleaning that up could help here if the ratings get a bit higher.

Even though we estimate the downloads to be lower than first place, the downloads-to-ratings rate is also lower, and that can be improved.

Moving down to third place things are pretty much the same. QR Code Reader: Quick Scan starts off great but also commits the cardinal ASO sin and also gets fewer ratings than second place.

I noticed that older app categories, like this one, tend to show a lot of repetition. The App Store was different 5-10 years ago and this could have worked back then. But now these mistakes are opportunities.

Down to 4th place, and this is a hot mess of what 2nd and 3rd places would look like if they were combined. QR Code & Barcode Scanner ・ mixes in all of the mistakes we've seen before and gets fewer ratings, which, in addition to making the algorithm (and me) laugh a bit, prevent it from ranking any higher.

Free QR Code Reader simply to scan a QR Code, in fifth place, is pretty unique. A relic. a 6-year-old app, and by that, I mean an app that was both released 6 years ago and hasn't been updated in 6 years. It doesn't have a subtitle and if you count, has more than 30 characters for its name. I counted. 44 characters.

That means it's very old. So old, our SDK Intelligence shows it uses Parse, which died years ago.

Here's a direct link to the App Store, in case you want to see it for yourself.

The reason we see this relic in these results, I suspect, has to be that it's super focused because it lacks a subtitle. That duplication right in the name isn't helping it, and no ratings don't either, but even with the duplication, it's very focused, and that's all the algorithm cares about.

Today we learned that there are still apps in the App Store from a bygone era and that the algorithm cares little for age. It does care about, and rewards, focus.

All kidding aside, this analysis is a reminder that opportunities aren't always about competitors not trying but rather about them doing it wrong. All you need to know is what bad ASO looks like and how to fix it, of course.

#67 - Are Longer Keywords Worth Optimizing For?

Should you include long keywords in your ASO, or should you eliminate those from your list?