There are a few simple rules to remember when optimizing your keywords that make a BIG difference. They're not even that complicated and are somewhat intuitive.

Shopping by phone isn't a new trend, but looking at these numbers, it's pretty clear it's a really popular one. Yet, the same mistakes we see in lower-popularity keywords also happen here. 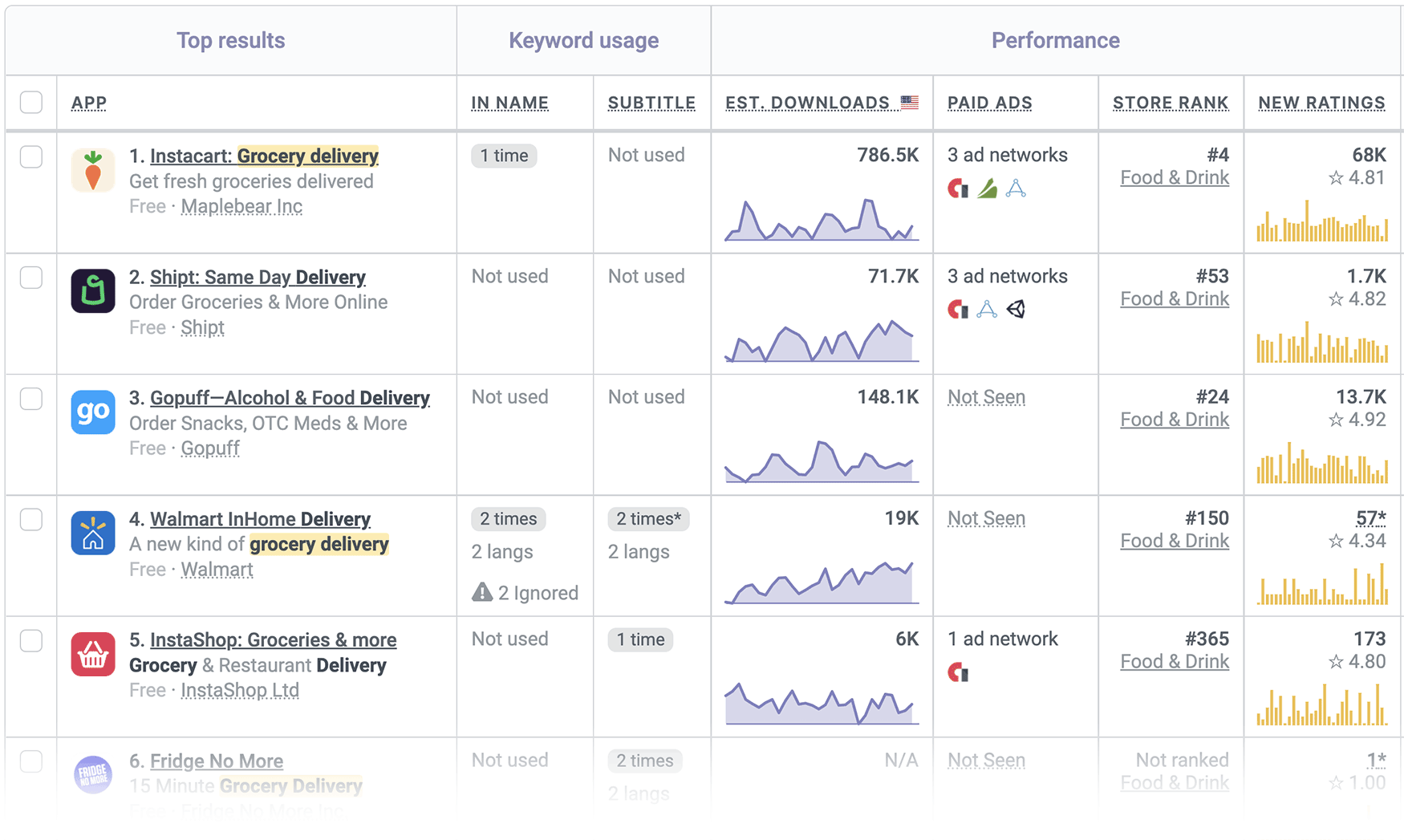 In first place we have Instacart, which uses the keyword right in its name as you'd expect. It also rocks the most ratings in this set, by far, making the algorithm's decision to rank it first a no-brainer.

But wait! It duplicated the keyword grocery in its subtitle. I did see that, and that's the #1 mistake on my list for you today. This is an interesting one, though, so I'll get back to it at the end.

But even with the repetition, it still outranks every other app in terms of ratings, which helps the algorithm keep it at the top.

Shipt, which the algorithm placed in the second spot, uses the keyword in a way that isn't great, which greatly diminishes its stack of ratings. Mistake #2 for the list is splitting an important keyword between the name and subtitle. That lowers its value as far the algorithm is concerned.

But wait, there's more! Mistake #3 for the list is that it's using the words in reverse. It has to for grammatical reasons, but the algorithm doesn't really see that. It sees two words in the wrong order. It still "sees" the keyword, but that also lowers its value.

The thing is, Shipt can't go any higher because it gets far fewer ratings than Instacart. I'd still recommend fixing these issues in case a smaller competitor, in terms of performance, attempts to do a better job.

In third place we have Gopuff. I won't criticize the name because that's unrelated. Although Gopuff gets 8x the ratings, it can't beat 2nd place Shipt because it's not using "grocery" in its visible metadata but rather in its keyword list. That's mistake #4 for the list.

I've shown how the keyword list is becoming more relevant, but it's still not as relevant as the subtitle or the name, so putting a keyword there makes it weaker instantly.

Maybe Gopuff doesn't do groceries, so this isn't as important, but if it does, adding it into its visible metadata without making any of the first 3 mistakes would allow it to overtake Shipt. That's why Shipt needs to fix those two mistakes.

Next up, in fourth place, is Walmart InHome Delivery. Yes, that Walmart, but not the flagship app, which might explain the super low ratings. Actually, it doesn't when you look at the download estimates. It should be getting more. A lot more. And that's mistake #5. I know it's not really about keywords, but it's important.

But it also makes mistakes with its keywords. The first and most obvious mistake is repetition. That's always bad. Always. Ignoring that, Walmart uses the full keyword in the subtitle. That's mistake #6. The subtitle is inherently weaker. Using an important keyword only in the subtitle really hurts your chances of ranking for it because your competitors are likely using it in their names.

And last for this list is InstaShop, which makes the same mistakes as Walmart, but with a few more ratings. Why isn't InstaShop ranking above Walmart? Two nuanced reasons. It uses the first word in the keyword in the name, while Walmart uses the last. The other is that the difference in new ratings isn't that big. It looks like it when you don't have many, but to the algorithm, small numbers all look the same.

Before we end, let's get back to the duplication in Instacart's name and subtitle. Duplication is a no-no, but when searching a few different keywords that include "grocery" and "groceries", I noticed the results seemed like the algorithm was differentiating between the two. Normally it wouldn't.

I'm not entirely sure why this word is handled differently, and I could be reading too much into a handful of results, so I'll do some more digging.

All you have to do now is the opposite. And in case you're curious why I listed mistakes instead of the actual rules, it's because many apps and games I see make these mistakes, and they're much easier to spot when you think about them as mistakes.

So, go check your app or game and make some changes.